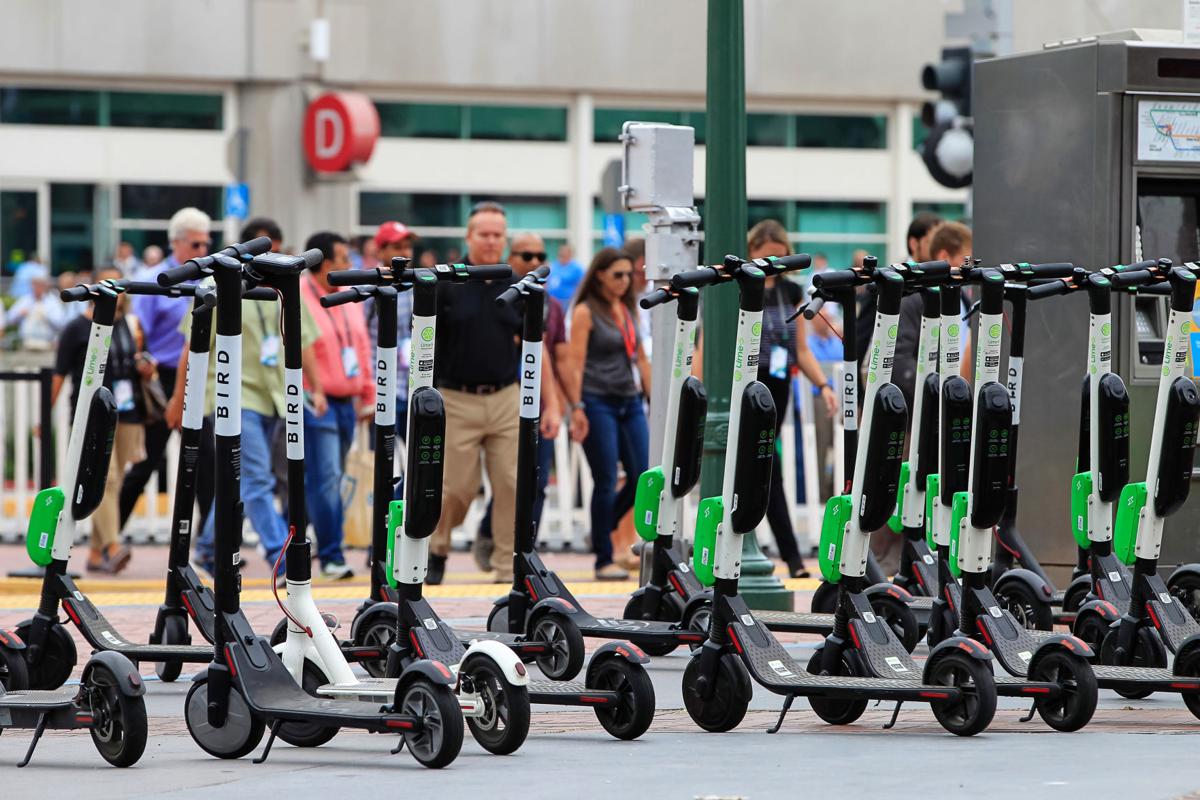 City officials say the six-month pilot program is designed to test where the scooters are a good fit for Tucson.

Maybe Tucson is a natural town for electric scooters.

There are no sidewalks in much of the city, so people aren’t as likely to be scooting along a walkway at 15 mph as they do in fulsomely sidewalked cities like San Diego.

And if the experiment in loose scooters goes belly-up, we know where to put them: We already have an airplane boneyard at D-M that could undoubtedly accept a pile of wishbone-shaped Birds.

Tucson is one step away from starting a six-month pilot project that allows e-scooters — under brand names like Lime, Bird or Razor —into the city.

The downside could not be more obvious, if you’ve been to the more densely populated cities where in many cases the scooters simply showed up without the companies even asking for municipal permission.

The city where I’ve had the most experience with them, San Diego, was littered with the scooters last year, blocking sidewalks, in front of people’s gates, at bus stops and on sidewalks, and riders were practically playing bumper cars with pedestrians.

When stopped, the scooters look like fanciful litter, propped up on a stand or ditched on the ground. When moving, they felt dangerous — to other pedestrians and to the riders themselves. Nobody was wearing the recommended helmets.

The fact that the UA has banned them seems like it should be telling us something. The university campus is the most crowded, pedestrian-filled place in Tucson, and also the place where the scooters are likely to get the most use. You can imagine the decent dent in car-commuting that scooters might make.

Yet the university announced in October it won’t allow electric scooters on campus because of safety concerns and the risk that they will block entrances and pathways, causing obstructions, especially for people with disabilities.

The UA was following ASU, which had been overrun with the scooters before announcing earlier in October — actually, reminding people of a pre-existing policy — that scooters are banned on ASU’s campus. In the first month of enforcement, ASU impounded more than 800 scooters and brought in nearly $80,000 in fees.

So, if they’re not good enough for the places where they’re most useful, why are they worth trying at all?

Kylie Walzak, chair of the Tucson-Pima Bicycle Advisory Committee, surprised me when she said she supports the introduction of dockless e-scooters.

Her reasoning: They’ve been shown to reduce automobile trips in cities like Portland, Oregon, where they’ve been introduced. In a letter to the City Council, she also noted what I consider to be one of the scooters’ best attributes: Their freedom to find their own market.

“Because of their dockless nature, e-scooters don’t just go where city officials decide to put them; they end up where the people of the city find them to be the most useful, which can be very different from what is intended.”

The six-month pilot project, as designed so far, would limit the number of scooters to a maximum of 1,500 distributed by two companies. It also requires the companies to indemnify the city and puts conditions on where the scooters can be left. Importantly, the scooter companies are required to move improperly stashed scooters within two hours.

The city is planning to charge a permit fee and a 20-cent-per-trip right-of-use fee. Andy Bemis, coordinator of the city’s bicycle and pedestrian program, told the City Council last week that they expect the fees to amount to around $132,000 in the course of the six-month pilot project — probably enough for the city to cover its oversight costs.

So, there are some good guidelines in place to keep Tucson from becoming an unmitigated mess if the council passes the final version of the pilot project in the coming month and starts the project, as planned, on July 1.

As Councilman Paul Cunningham put it, “If we don’t try it, we can’t know if there’s a positive effect.”

He went on, “Is Tucson a scooter type town or not? Should we just say no or do we deserve to find out?”

His open-mindedness was a little refreshing about a business that practically begs for skepticism.

As Councilman Paul Durham, a scooter supporter, noted, the proposed city project would require the companies to offer users helmets, but there is no practical way to make that happen, at least on the first ride. The fact is, almost nobody who rides these scooters, in the street and up to 15 mph, will wear a helmet.

Or, as opponent Steve Kozachik, who represents the ward where most of the scooters will be stationed, put it, “We have enforcement issues, we have clutter issues, we have safety issues. We have accidents. I can’t even imagine these tiny little wheels navigating the streetcar tracks. I think we ought to be learning from the experiences of other jurisdictions who have tried this and say no.”

Indeed, it feels like a recipe for disaster, or at best clutter that serves a small population. But heck — what’s six months? And after that, there’s always the boneyard.

The scooters could be operating in Tucson as early as July 1.

Famous Dave's near Tucson Mall closes, set to reopen next month on Speedway

But no address was listed.

Heads up: Traffic signal work planned at Stone and Limberlost in Tucson

Officials say the work schedule could change due to unforeseen circumstances.

The two e-scooter companies operating in Tucson, Razor and Bird, as well as the Tucson Department of Transportation were put on notice by the …

City officials say the six-month pilot program is designed to test where the scooters are a good fit for Tucson.