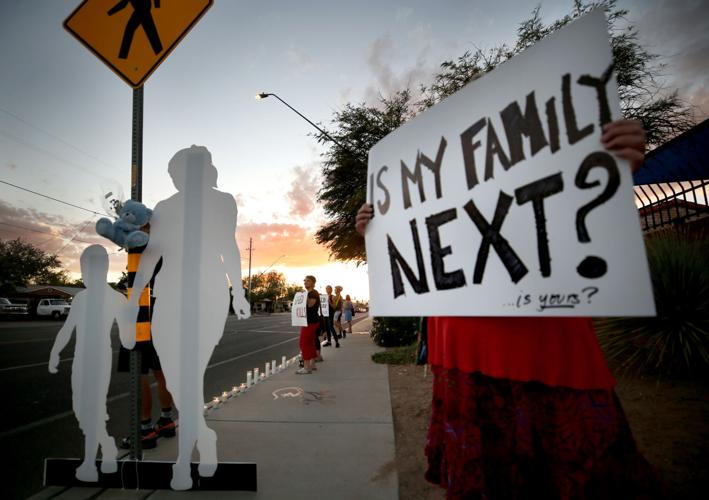 About 30 people attended a vigil for Anna Mentzer and her son Ethan, who both died after being struck Wednesday by a vehicle while in a crosswalk at Pima Street and Mountain View Avenue. The vigil was held Thursday.

Molly Bednar and I met at the Bashful Bandit bar Wednesday afternoon to talk about her friend Anna Mentzer and Mentzer’s son Ethan, both of them killed that morning while walking Ethan to school.

But before we got to that topic, Bednar mentioned how her own daughter had been struck by a car while crossing East Fifth Street in a crosswalk seven years ago. The then-7-year-old girl had to have surgery on her head, but luckily she emerged without brain damage.

Earlier that same afternoon, the Rev. Ron Oakham led an ad hoc service for Ethan and Anna, attended by the students and parents of St. Cyril, the Catholic school Ethan attended. It was Oakham’s second service for someone struck and killed by a Tucson driver in five days. The previous Saturday he’d performed the funeral Mass for parishioner Jezzelyn Lankisch, killed Sept. 29 while taking a morning walk.

As I used the crosswalk where Ethan and Anna were struck Wednesday afternoon, a trio of pedestrians passed on the nearby sidewalk. I struck up a conversation and asked if they’d had problems walking around there. One of them told me that just the week before, a car had narrowly missed him as it turned into his path while he crossed East Pima at Swan on a green light.

Even during a candlelight vigil Thursday evening over the deaths of Ethan and Anna Mentzer, vehicles sped past pedestrians while they were using the same crosswalk where the pair had been killed.

Talk to anyone around here, especially in central Tucson, and you’ll hear the stories. Or just stand at a busy corner and watch. The stories and experiences paint the picture of a pervasive problem of thoughtless Tucson drivers giving no quarter to unprotected pedestrians.

While walkers have certainly been at fault in some of the collisions, darting into traffic and giving motorists no chance of missing them, it’s clear we Tucson drivers often do not pay enough attention. At worst, we are thoughtless, self-centered jerks.

When I asked the Tucson Police Department for a breakdown of the causes of this year’s fatal incidents, though, it painted a picture that seems different than the one I’m sketching here. This is how it listed the circumstances of the 22 pedestrian collisions that occurred before Wednesday:

Total pedestrians jaywalking: 15 (of those 4 were impaired by drugs or alcohol).

Pedestrians in crosswalk / Driver fail to yield right of way: 4.

With Wednesday’s deaths, of course, there are now six that have occurred in a crosswalk, with the driver failing to yield. That’s a quarter of the total.

Those numbers seem to absolve the drivers in most of this year’s cases of run-over pedestrians, but I don’t think we should be so sure. The fact a person was jaywalking when struck does not mean that better driving could have avoided the collision.

Besides, disorder seems to be growing on our roads, and it may well be that pedestrians are just victims of a bigger change.

The numbers I was able to dig up Friday say that local police have been filing much fewer traffic citations and criminal traffic charges in the last few years. At the same time, the number of traffic collisions of all types that Tucson police are responding to is soaring.

One of the reasons civil traffic citations declined was the end of the red-light camera program in November 2015. But a city court report says the annual average number of camera citations was about 33,000, while the decline in civil citations filed at city court dropped by 52,990 between fiscal years 2015 and 2016. Criminal traffic filings also plummeted in that period by 32 percent, from 13,464 to 10,195.

Something bigger is going on.

But it’s no wonder Tucson drivers feel pretty safe breaking the law around here these days.

Unable to get crash data from TPD on short notice, my colleague Murphy Woodhouse and I pulled figures from the city’s GIS system to find more information. From calendar years 2013 through 2015, that system shows, Tucson police responded to an average of 4,267 traffic incidents, mostly crashes, per year. From year to year over that period, the variation was only by about 5 percent.

Then, in 2016, the number of crashes apparently soared.

Tucson police data from the GIS system show a 38.5 percent increase to 5,986 police responses to traffic incidents that year. This year, the system shows crashes continuing at that same high pace.

So that’s the police context in which this wave of pedestrian killings — 24 so far this year — have taken place. Less and less enforcement, more and more collisions. And yet, so far this year, most pedestrians who have been killed have also gotten the blame for their own deaths.

Tucsonans’ stories and the data are saying something bigger is going on.

The hike, which needs board of supervisor approval, could be split into two 8-percent hikes.

Elizabeth Smith became a leading figure in the community and her success contributed to the economic growth of the town.

Pima County has brought in 94 black-tailed prairie dogs from New Mexico and released them on the Sands Ranch near Sonoita.

A unanimous vote is the biggest hurdle the measure would have to clear.

Biz tip of the week: The value of indirect referrals

Pay attention to the value everyone brings to your business.

We've collected a few front pages from newspapers.com to give you a look at some Oct. 16 papers in history. With a subscription to newspapers.…

The Royal Room, Tucson's newest wine bar, is slated to open its doors this Tuesday on the same southeast corner of East Sixth Street and North…

Your interpretation of these civilian deaths by drivers is certainly with merit and I am very happy to see someone bringing this up. I agree w…

City Council to Tucson drivers: Put your cell phone away

The Tucson City Council voted Tuesday night to make use of a cellphone while driving a primary offense, making it easier for police to issue tickets.

Legislation would have nearly doubled the required coverage. Governor was worried more people would fail to buy any insurance as a result.

About 30 people attended a vigil for Anna Mentzer and her son Ethan, who both died after being struck Wednesday by a vehicle while in a crosswalk at Pima Street and Mountain View Avenue. The vigil was held Thursday.