Read Today's E-Edition
Share This
Steller: Finally, a realistic deal to reopen the Hotel Arizona
Share this
1 of 2 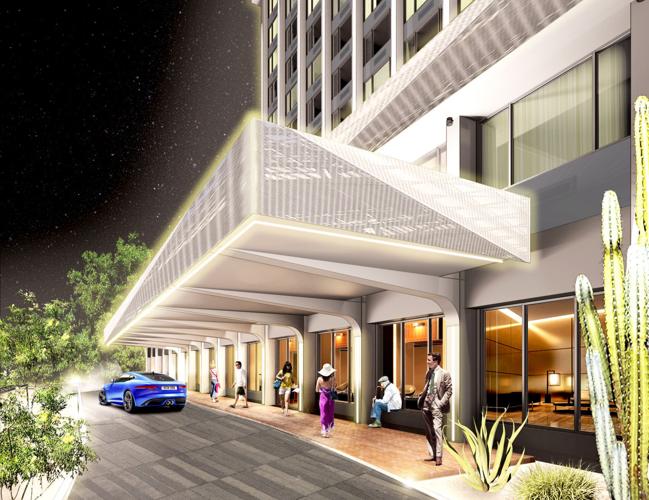 An artist’s rendering of the hotel’s entrance after the proposed renovation of the former Hotel Arizona downtown.

Eleven years ago, it felt like a grand redevelopment of downtown’s convention-center hotel was imminent.

My then-colleague Joseph Barrios wrote in the Star, “Self-made millionaire and Tucson resident Humberto Lopez has long described himself as a ‘deal junkie.’ Now he has a deal for you.”

It was a $185 million deal with the city to redevelop the Hotel Arizona, at 181 W. Broadway, which had recently dropped its Radisson branding. The existing hotel would be renovated, and new 16- and 22-story towers would be built in what was ostentatiously dubbed Diamond Rock Plaza.

That plan went nowhere. But in the next few years, a new, more elaborate deal made it all the way to the City Council before withering. That $190 million plan for a new Sheraton hotel on the site would have involved the city selling tax-free bonds and guaranteeing revenue.

The city wisely decided not to expose itself to that risk. Now, with a new deal to renovate the hotel pending, we’re seeing how smart a choice that was.

Up in Phoenix, the city took out $350 million in debt to pay for construction of a 1,000-room, Sheraton-branded convention-center hotel. It opened in 2008. After years of million-dollar losses operating the hotel, Phoenix is close to selling it at a loss that will exceed $100 million in taxpayer dollars.

Tucson’s smart decision brought blowback, though. In 2010, Lopez initiated a short-lived recall effort against two members of the Tucson City Council and the mayor.

Worse, as the recession’s effects lingered on, in 2012 HSL Properties closed the Hotel Arizona. As run-down as that hotel had become, that meant there were no longer any hotel rooms next to the Tucson Convention Center.

Whether the company had to close the hotel or was just using the eyesore as leverage to force the city to strike a better deal was never something an outsider could tell.

Over the years HSL has made overtures to the city about a new deal, Councilman Steve Kozachik said. They continued to involve putting city money or credit on the line.

Until now. Thanks to those years of resistance to massively subsidized deals, we’re finally down to a bare-bones project, one that is built on a solid foundation of Tucson humility rather than major-metro aspirations.

As my colleague David Wichner reported last week, the Rio Nuevo Multifacilities District has approved a new deal that would get the Hotel Arizona reopened.

It’s a relatively simple deal, in which HSL would do a $20 million renovation of the hotel and reopen it with about the 309 rooms it had before, with maybe a few less due to combining rooms to make suites. It will be a Hilton brand, probably a Doubletree.

In exchange, HSL is asking for a set of incentives that is pretty standard these days in downtown Tucson.

“We’re not asking for a cash contribution at all, for putting money into this project,” HSL’s Jerry Fischer told the board. “We are asking for a GPLET of up to 25 years, and we’re asking for the district’s share of the site-specific taxes through 2025.”

The GPLET is a program under which a project’s tax burden is reduced by transferring title to a government entity, which leases it back to the private owner. The owner pays an excise tax instead of the usual property tax, and even the excise tax can be eliminated for the first eight years.

HSL is also likely to ask for incentives that the city of Tucson provides to those redeveloping properties in downtown Tucson and adjacent areas. If the company asks for more than what others get, the city should say no.

“They’re inside the Central Business District, so there are some things they’d be able to ask for,” said Kozachik, who has led resistance to subsidy deals for the hotel over the years. “It’s not cash out of pocket. It’s not the city backing their bonds.”

“The conversation appears to have changed,” he added.

Now, instead of a huge hotel or two right next to the Tucson Convention Center, we’ll have smaller hotels scattered across downtown. The AC Marriott is set to open next month a few blocks east at 151 E. Broadway.

Plans are also underway for a Moxy hotel by Marriott near the Hotel Congress, and Caliber Hospitality, a Scottsdale company, is moving forward on plans for a hotel on the south side of the Tucson Convention Center. The Hotel Arizona is on the north side.

So not only are we reducing the public’s risk as we slowly build up a stock of hotel rooms in downtown Tucson, we’re also spreading it among a variety of private companies.

That’s a lot smarter approach than the big, risky deals of years ago. And it gives us more power to say no when a private company demands too much from the taxpayers.

The historic El Conquistador Hotel, designed by Annie Graham Rockfellow, opened in 1928. The hotel's opening coincided with the Great Depressi…

Arpaio won't shut door on another run for public office

Said if he decides to return to politics he may run against U.S. Sen. Jeff Flake.

Even if the desert eagles become extinct, it wouldn't make a real difference to eagle populations as a whole, court rules.

Since Rich Rodriguez was hired as Arizona’s coach in 2012, he’s consistently expressed the importance of adding an indoor practice facility fo…

The Kayenta Solar Facility can power about 13,000 Navajo homes.

Showers and thunderstorms are possible this afternoon and evening.

Triple-digit temperatures are back, so let's commiserate with ice cream!

Two men were found with what appear to be gunshot wounds.

Steller's Friday Notebook: Saguaro or not, Amazon out of Tucson's league

Effort to recruit Amazon here is wasted, plus more on Stegeman, Brnovich and CD 2.

Myanmar children cut off from education and healthcare

Myanmar children cut off from education and healthcare

An artist’s rendering of the hotel’s entrance after the proposed renovation of the former Hotel Arizona downtown.