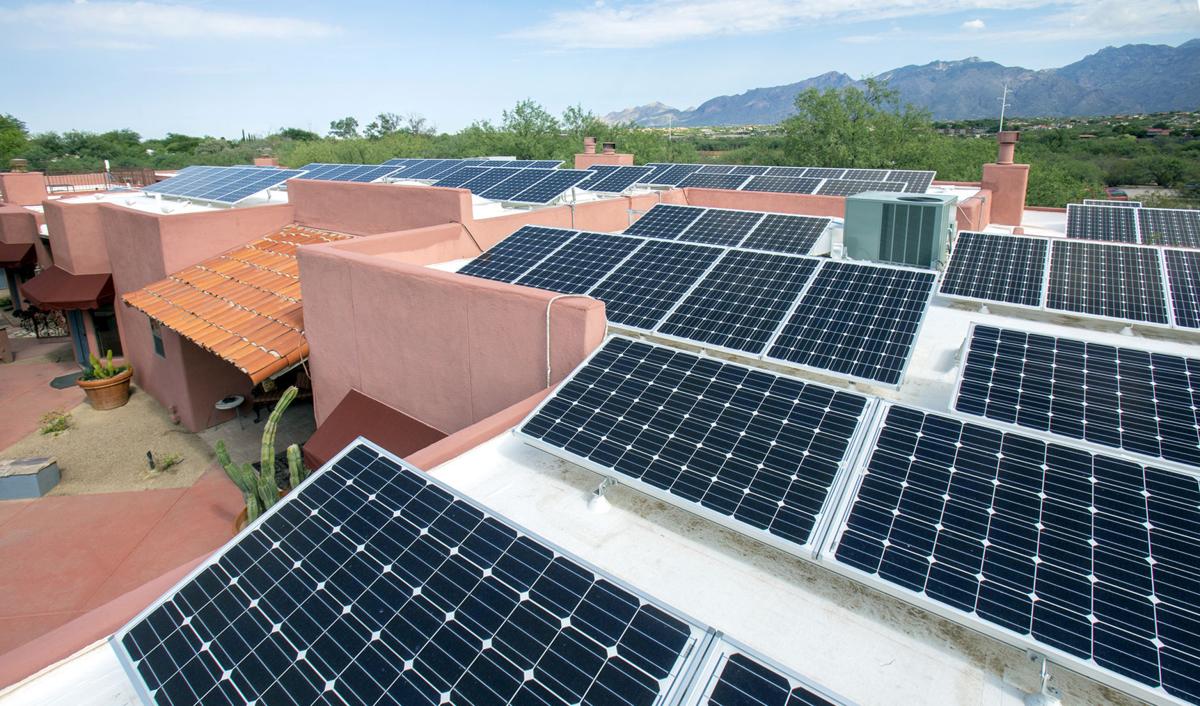 Tucson Electric Power has proposed a new rate structure for those who install rooftop solar in the future that would cut credits for excess solar production.

How are we going to keep our air conditioners running in coming Tucson summers?

You had to wonder that over the last couple of weeks.

Tucson Electric Power set records for daily demand on June 20 and again on June 21. The heat that used to come in shorter waves simply settled in, going from a record-setting series of days to a searing, weeks-long above-normal heat.

On Monday, when the Arizona Corporation Commission held a hearing on TEP’s proposal to change the rules governing rooftop solar, the high temperature was 107 after a low of 83.

We can expect more of this and will have to figure how to keep the cool air flowing. By mid-century, it’s likely that Tucson’s temperatures will be like those of Phoenix now.

Gregg Garfin, a University of Arizona climatologist, has looked ahead to our future climate and, unsurprisingly by now, finds it will be quite warm, especially if we do little to curb heat-trapping gas emissions.

“In the business-as-usual case, by 2050 or so, the annual average temperature will go up something on the order of 4 or so degrees Fahrenheit,” he said. “What that translates to is something like another 15 or 20 days a year over 100 degrees.”

While the Southwest will be especially hard hit by higher temperatures, the whole country needs to face a hotter future of higher demand for electricity, a University of California-Berkeley professor of environmental economics showed in recent research. Max Auffhammer and colleagues showed that higher peak electric demands will probably require big investments in electric generation.

Their estimate: $180 billion in new generation by the end of this century.

How we reach that is a trickier question and brings in the solar issue that Tucsonans packed a downtown hearing room to discuss on Monday.

These peaker plants would likely be natural-gas powered. In other words, they would extend our dependence on fossil fuels.

Why not solar? Rooftop solar especially does not produce the energy when it’s needed most, because its peak production is at midday, while peak demand is late in the afternoon, after 4 p.m.

“I’m under no illusion that this is the scalable way to produce more power,” Auffhammer said, noting that he himself has rooftop panels and drives an electric vehicle.

Utility-scale solar plants have better potential to help address the rising peak of demand in the future, he said, but they still require improvements in storage.

This idea that our future climate will be hotter does not, of course, come as news to Tucson Electric Power.

“We are planning for multiple scenarios,” spokesman Joe Salkowski told me. That includes “high-load growth and low-load growth scenarios.”

But solar isn’t part of the solution for high-load growth yet, he said. “We do have a lot of solar on the grid at noon, and that number is only going to grow, and that’s a good thing. However, our system consumption doesn’t peak until later in the day, between 4 and 6 o’clock.”

The records that TEP set were in the 4 o’clock hour. By that time, Salkowski said, “Our own solar resources and those on our customers’ rooftops have begun to fade. As a result, we then must ramp up conventional generating resources to meet customer demands.” It’s back to the storage problem.

But solar advocates at the hearing Monday noted that rooftop solar can have a role to play in meeting higher future demands. Specifically, it helps by distributing the sources of power and placing them right in the communities where it’s needed, rather than at power plants hundreds of miles away.

“As we distribute load and generation, as generation moves into the home, it does strengthen the system,” George Villec, who spoke at the hearing, told me later last week. “You don’t want centralized generation, you want it distributed.”

Villec, who owns a local solar company called Geo Innovation, argued that the utility’s hostility to rooftop solar, as expressed in its current proposal before the Corporation Commission, will drive potential customers away and put some companies out of business. That weakens the system.

Or as Court Rich, a solar-industry attorney, put it to me: “The more people have rooftop solar, the less people have to buy from the utility. Eventually, when enough people have solar on their rooftop, the utility doesn’t need to build a new plant.”

I’m not expert enough to be able to say whether that much rooftop solar will ever pencil out for enough Tucsonans to make preventing a new plant possible. But we’re clearly going to need to produce more power, and keeping it as renewable as possible and as close to home as possible make common sense.

Arizona lawmakers are likely to cut services to patients or reimbursements for medical providers, or both. People will lose care.

Testy exchange shows just how much some GOP lawmakers revile the state board.

Fourth of July in Tucson and Southern Arizona

Steller: If John McCain retires, 12 who could succeed him

A resignation in the next year would mean whomever Gov. Ducey appoints will have to run in November 2018.

Tucson Electric Power has proposed a new rate structure for those who install rooftop solar in the future that would cut credits for excess solar production.