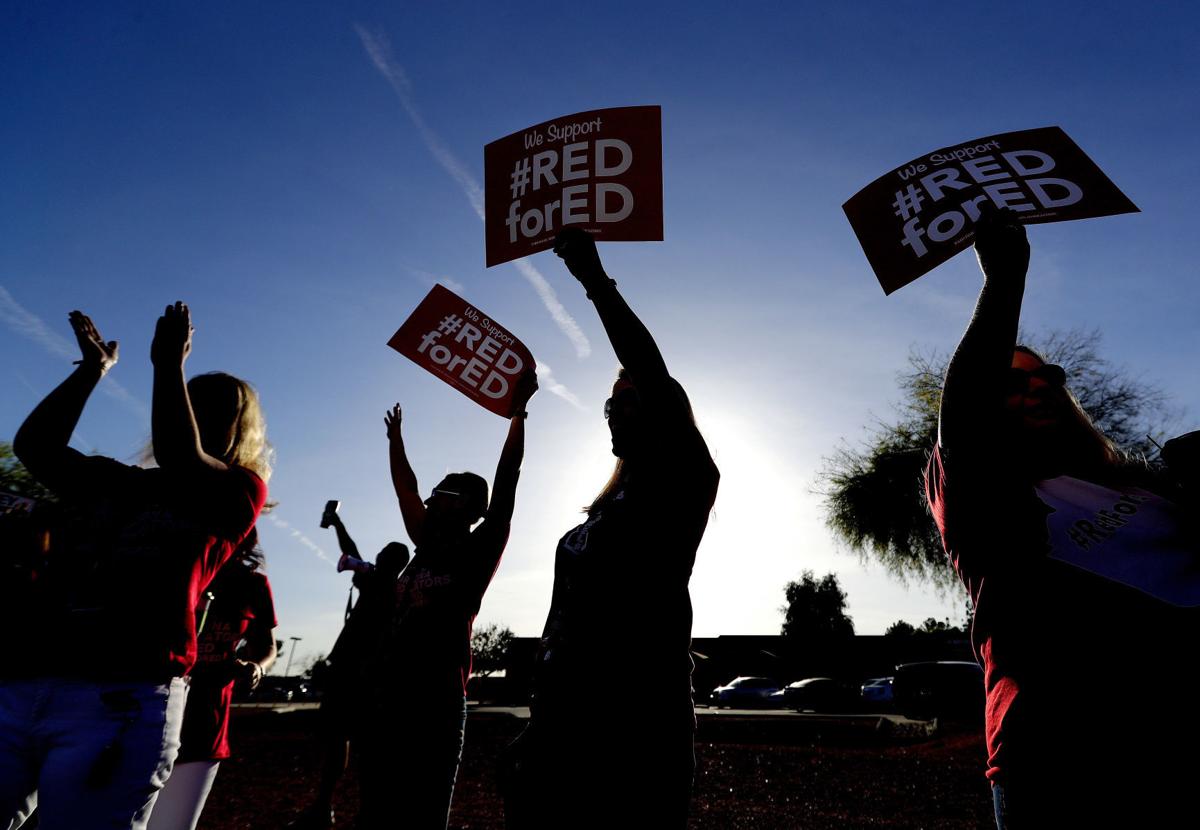 In this file photo, educators throughout the state, including this group at Humphrey Elementary in Chandler, wore red and carried “#RedForEd” signs Wednesday morning before classes.

In the wake of Gov. Doug Ducey’s proposal last week for increasing teacher pay, a series of prominent Arizonans spoke out to support him in online videos.

The enthusiastic endorsements created, or at least attempted to create, a sense of growing momentum for Ducey’s plan, labeled #20x2020, meaning “20 percent by 2020.” But the fact was, almost everyone who put out these videos was a pre-existing Ducey enthusiast eager to support his re-election, and few of them had acknowledged the idea that teacher pay or school funding was a problem — until the governor came up with a solution.

So what is the real state of public opinion on Ducey’s proposal amid a teachers strike set for next week? There was an initial burst of enthusiasm for the governor’s surprisingly generous plan. A poll by Data Orbital over the weekend, before the details of the proposal had come out, showed approval of the plan by 75 percent of likely Arizona voters, using an automated survey of 800 people with land lines.

That did, I think, reflect the initial impressions after people heard the top-line numbers from the governor’s office: A 20 percent pay increase over four years, part of about $1 billion in extra funding for schools by 2023.

But the debate is quickly becoming more polarized and partisan as the details become clear. The lack of a dependable source of money for the plan — a key issue for years in Arizona education debates — is driving opposition.

The Arizona Center for Economic Integrity pointed out that the last big education initiative to come into effect without a dependable funding stream, the 1998 Students First effort to pay for building new schools, led to funding so inconsistent that we’re mired in a new lawsuit today over capital funding for schools.

Two groups that often oppose Ducey on education issues, Support Our Schools Arizona and the Arizona PTA, initially supported Ducey’s proposal — then withdrew their support. They didn’t like that the proposal sweeps millions of dollars in planned spending on skilled nursing services, “critical access hospitals” and services for the developmentally disabled, among other things.

Then on Thursday a Joint Legislative Budget Committee analysis concluded Ducey’s plan would lead to a deficit of up to $300 million by 2021. Ducey’s office disputed the assumptions the committee used to reach its conclusions.

As skepticism has grown over Ducey’s plan, his supporters have worked to show that those leading the #RedForEd movement are simply Democrats using teachers to try to defeat Republicans like Ducey in this year’s election. Conservative Phoenix radio host Mike Broomhead pointed out that Derek Harris, a Tucson teacher who is among the leaders of the movement, has made numerous strident anti-Republican posts on Facebook.

And the Republican Governors Association has booked $330,000 worth of ad time on television to promote Ducey’s plan.

It looks like we are headed toward extreme polarization on this education issue and the Ducey proposal, especially if a strike lasts. Careers depend on the outcome.

On Friday, walkouts and other events are occurring around the country related to gun violence, an outgrowth of the high-school student movement that began after the mass shooting in Parkland, Fla.

For a while, there was scheduled a “town hall” on gun violence and public education funding at the Rincon/University High School campus. It was to feature three Democrats — Rep. Randy Friese, Sen. Steve Farley and Yahya Yuksel, a candidate for the Dem nomination in Congressional District 2 — and no Republicans.

But the Pima County GOP caught wind of it and sent a letter to TUSD Superintendent Gabriel Trujillo demanding that he cancel it.

“To say this is an inappropriate use of publicly funded school property is an understatement, if not illegal,” party Chair David Eppihimer wrote.

Trujillo canceled that event and noted via email, “If the event is to be re-scheduled, it shall be re-scheduled as an evening event, after school hours, and shall be inclusive of Republican party lawmakers and/or candidates for public office.”

When Eppihimer later received photos of a flyer promoting a student walkout sanctioned by teachers, he contacted Trujillo again. Again, Trujillo put the kibosh on any sanctioning of a walkout, but did not discount that it might happen: “The Tucson Unified School District does not sanction or endorse any action on the part of students that involves them leaving campus without authorization during the school day and the district has not sanctioned or approved this potential Friday march.”

If the U.S. Senate election were held today, a new survey says, Rep. Martha McSally would take second place in the primary or the general.

In a general election matchup with Democratic Rep. Kyrsten Sinema, McSally would perform best among all the Republicans, the poll found, but she would still lose to Sinema by six percentage points. That compares to a losing margin of 10 for Ward and 26 for Arpaio.

The poll of 600 likely voters, by cell phone or landline, has a potential margin of error of 4 percent on the general election questions and 5.64 percent for the Republican primary questions.

Last week I noted how Republicans such as Congressional District 1 candidate Tiffany Shedd are likely to use any contributions received by their opponents from Backpage.com founders Michael Lacey or Jim Larkin against them. The two have been criminally charged with money laundering and facilitating prostitution.

It turns out, Democratic Rep. Tom O’Halleran, whom Shedd was accusing, did not receive the $8,000 Shedd cited in her accusation from either Lacey or Larkin. He received it from other Backpage employees or spouses whose employer was not listed on their donation form, making it hard to know their connection.

O’Halleran campaign consultant Rodd McLeod told me in an email: “These are people who went online and gave with their credit card. When it was pointed out to us that these folks either worked for Backpage or were family members, we took that money and donated it to charity.”

Speaking of Shedd, she received a pretty high-value endorsement this week, from former Sen. Jon Kyl. He noted her experience as a farmer, an attorney and a small business owner in choosing Shedd.

”Her knowledge and experience of issues that are important to rural Arizona will serve the district well,” he said in a prepared statement.

The other Republican candidate in CD 1 is state Sen. Steve Smith, who is touting endorsements from Texas U.S. Sen. Ted Cruz and Arizona Rep. Andy Biggs among others.

Result of Arizona teacher walkout vote to be announced tonight

The walkout vote is the latest effort in the state’s #RedForEd movement.

Approximately 1,500 protested for an increase in education funding and teacher's pay, chanted, danced and flashed their signs on all four corn…

Tucson businessman was tied up and robbed in Foothills killing, court record says

The suspect charged in the killing had set off a security alarm on the victim's property three days prior.

In this file photo, educators throughout the state, including this group at Humphrey Elementary in Chandler, wore red and carried “#RedForEd” signs Wednesday morning before classes.