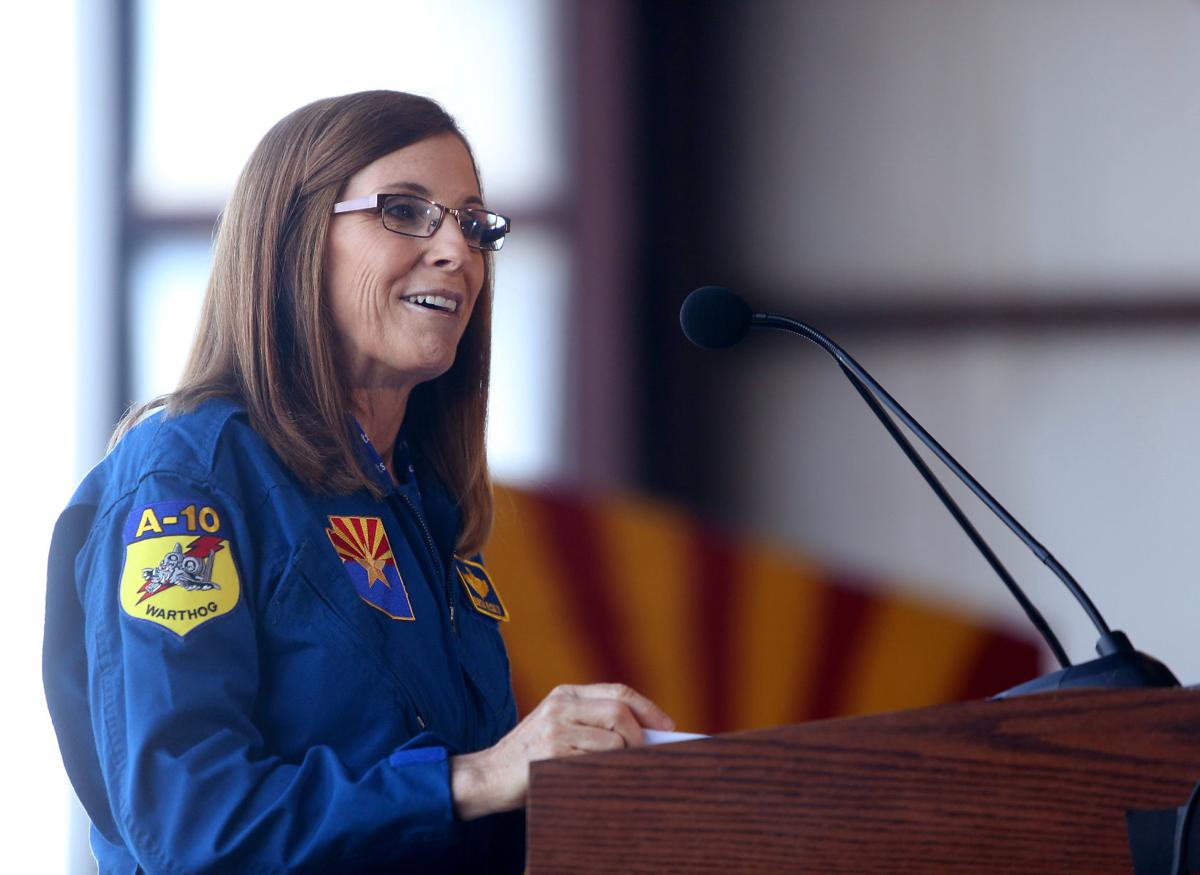 U.S. Rep. Martha McSally, now a Republican candidate for the Senate, has voted to support President Trump’s agenda a majority of the time.

It used to be surprising when Rep. Martha McSally made an off-color comment.

Back in 2012, then-candidate McSally got lots of attention when she responded to a presidential candidate’s objections to women in combat by saying this on national TV: “I agree with many of the things that Rick Santorum says, but when I heard this I really just wanted to go kick him in the jimmy.”

Now that she is running for U.S. Senate, it seems like every time she opens her mouth, she kicks another jimmy. Whether her coarse language is a good thing or a bad thing is for the voters to decide. But probably more important is to keep aware of what positions she’s taking when she makes her off-color comments, and whether the saltiness is being used to cover up the meat of the matter.

Wednesday night on Tucker Carlson’s Fox News show, McSally talked about Democrats’ role in a possible government shutdown this way: “While our troops are over there risking their lives for us, these guys are dicking around — excuse my language — trying to come up with some issue that’s not even in the top 20 priority of the American people.”

That came after her introductory Senate-campaign video last week, in which she said that Washington, D.C., Republicans should “grow a pair of ovaries.”

Before that, in July, there was the behind-closed-doors comment to fellow Republicans about a Republican plan to kill the Affordable Care Act: “Let’s get this f***ing thing done.”

It all adds up to a tough-talking political persona that McSally is undoubtedly happy to present. It probably does reflect her authentic personality. But in the age of Trump in the Arizona GOP, it probably helps her chances to run as a vulgarity-spitting, cocksure candidate. That’s especially true because her opponents, Kelli Ward and Joe Arpaio, are trying to paint her as an “establishment” candidate not supportive enough of Trump.

It’s important to remember the language often distracts from the meaning. The offensive thing about the July comment wasn’t necessarily the F-bomb McSally dropped, but the position she was taking. McSally didn’t want to quibble over the details of removing a program that gave health insurance to millions — she just wanted to get it done.

Similarly, when she was asked about President Trump’s comment last week about why we have so many immigrants from “shithole” countries, McSally chose to view the question as being about language, not substance.

“I speak a little salty behind closed doors at times as well, so I’m not going to throw the first stone on using any language,” she told reporters after her announcement.

But that was avoiding the point, which was that Trump had argued we shouldn’t accept so many people from poor countries, that, coincidentally or not, are full of brown-skinned people. She avoided that by talking about his language.

So, sure, McSally uses salty language, as she calls it. I expect she will continue to do so publicly as long as she thinks it benefits her. But voters shouldn’t let that distract them from the positions she’s taking, or obscuring.

I reported last week that Joe Arpaio’s entry into the race for Sen. Jeff Flake’s seat could benefit McSally by splitting the stronger pro-Trump segment of the GOP. A new poll by Data Orbital bears that out.

The live-caller poll of 500 likely voters in the Republican primary gave McSally the lead, with 31 percent favoring her. Arpaio was the favorite of 22 percent, while Ward polled at 19 percent.

McSally even led Arpaio and Ward in Maricopa County, where she had 28 percent, to Arpaio’s 22 percent and Ward’s 20 percent.

If David Garcia had won his 2014 race for superintendent of public instruction, he would be running for governor now as a statewide officeholder with a record of his own.

Instead, as he told me last year, he’s running as an outsider candidate in what he hopes is a political era of outsiders. That’s taking lemons and making lemonade.

Again, taking lemons and making lemonade. At some point, if Garcia is to become the front-running Democratic candidate people expect, he’ll have to stop with the lemons.

On the Democratic side, a perennial candidate has jumped in to challenge incumbent Rep. Tom O’Halleran in District 1. Miguel Olivas told his hometown Coolidge Examiner that he views O’Halleran as “ineffective.” Olivas initiated campaigns in 2012 and 2014 but didn’t stay in a race until 2016, when he won 41 percent of the vote in the Democratic primary to O’Halleran’s 59 percent.

Tom Jenney, state legislative director for Americans for Prosperity, gave Pima County Supervisor Ally Miller a “local hero” award for her work on behalf of taxpayers at Tuesday’s board meeting. The award itself was that rarest of desert creatures: A stuffed jackalope.

“Twould take too long for here to tally, the things we laud in our dear Ally. Indulge me please and do not rue, as I do list a very few.

“To spending she would take an axe, and fight against each new sales tax, push for roads and beat down bond, of contracts crony, she’s not fond.

“In Star and Weekly she takes her lumps, but blame her not for holes and bumps. Derided much and called a ‘loon,’ but voted not for flame balloon!

“And how respond, ye ruling three, to this your buzzing, stinging bee? We hope that you will oft give thanks: for dissenting voice within your ranks!

“And so we give this jackalope, and show to Ally sign of hope. We wish her well and best of luck, in future tangles with the Chuck.”

Rep. Martha McSally says she was sexually abused by coach as a teen

U.S. Rep. Martha McSally, now a Republican candidate for the Senate, has voted to support President Trump’s agenda a majority of the time.