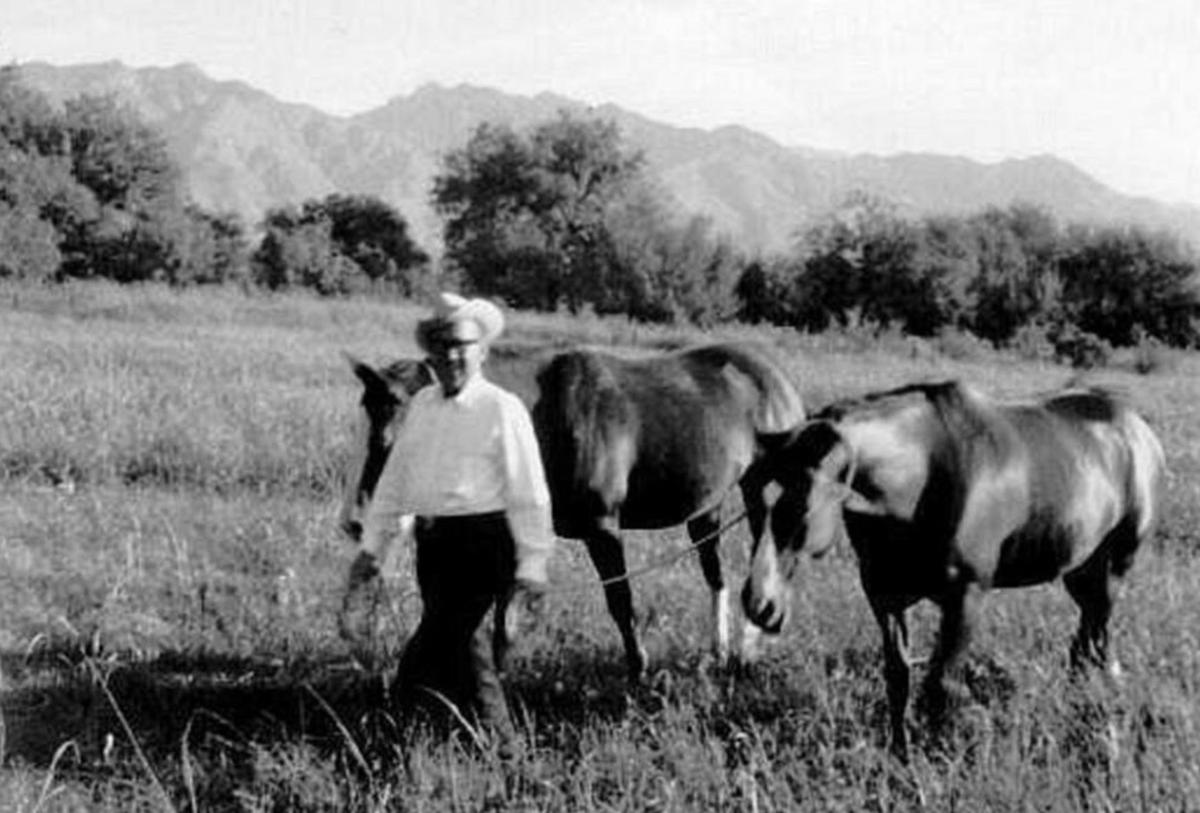 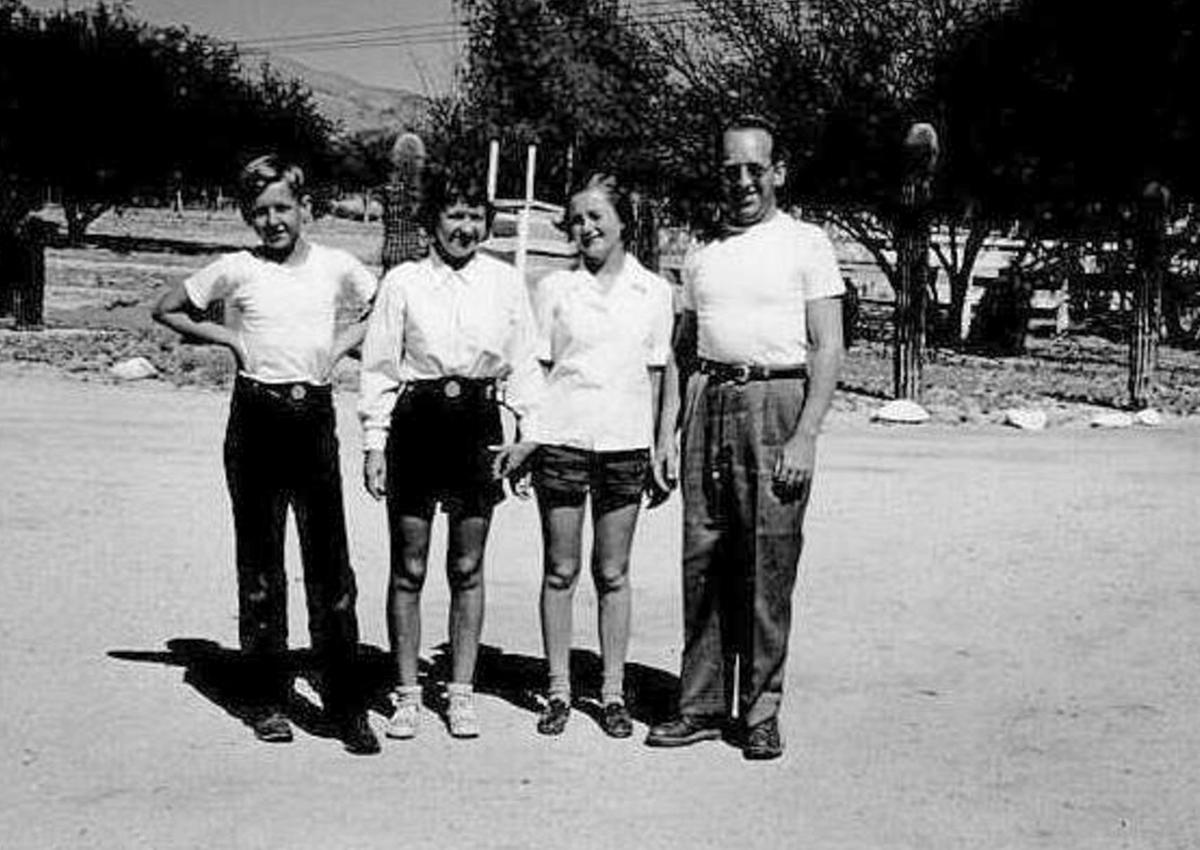 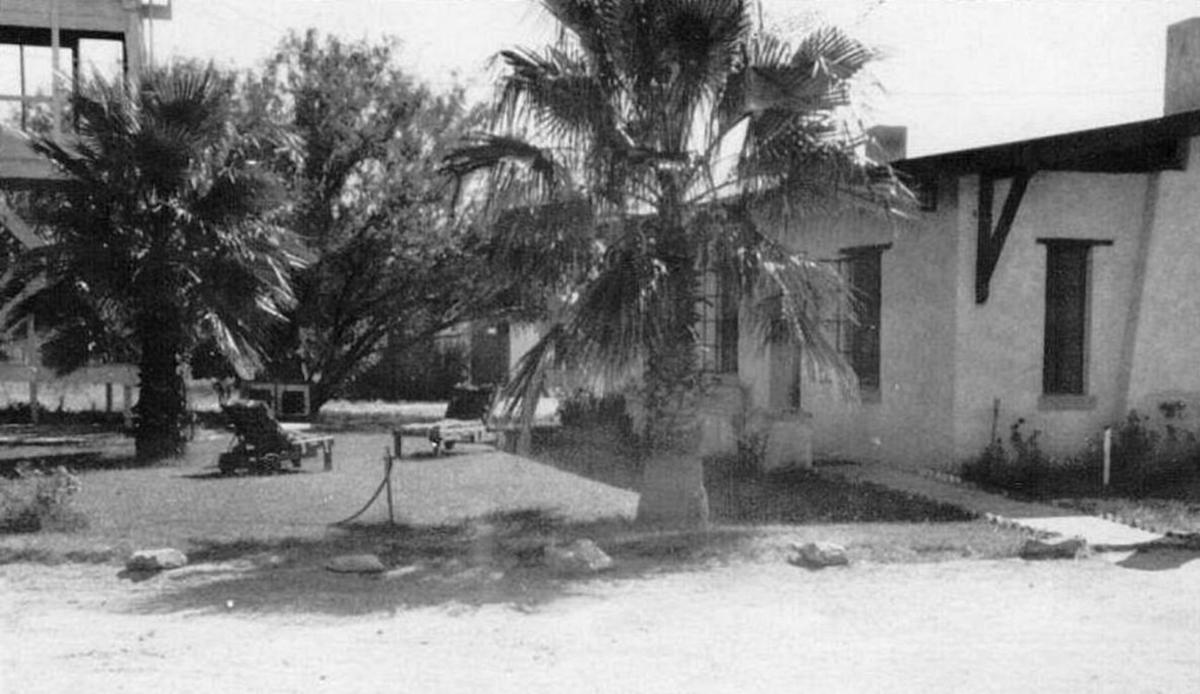 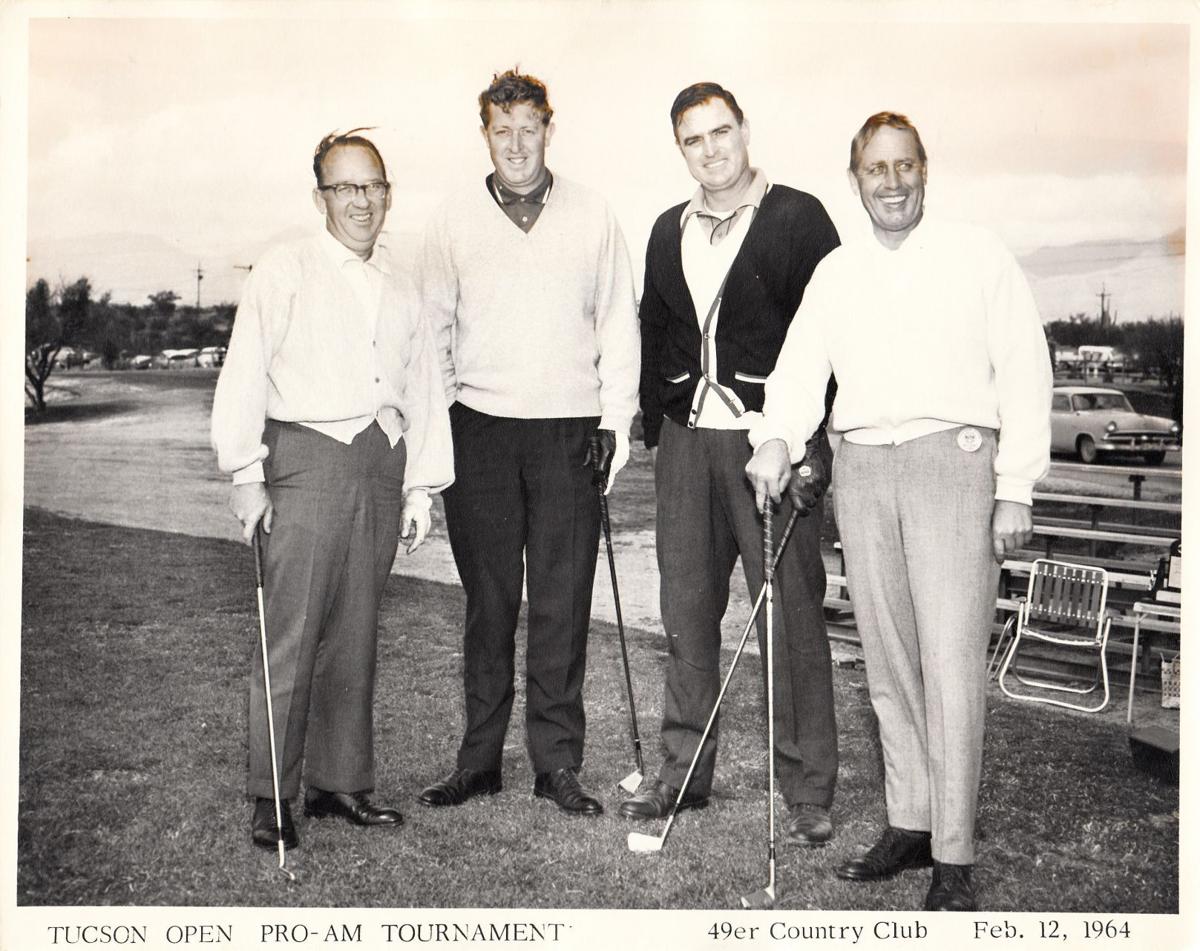 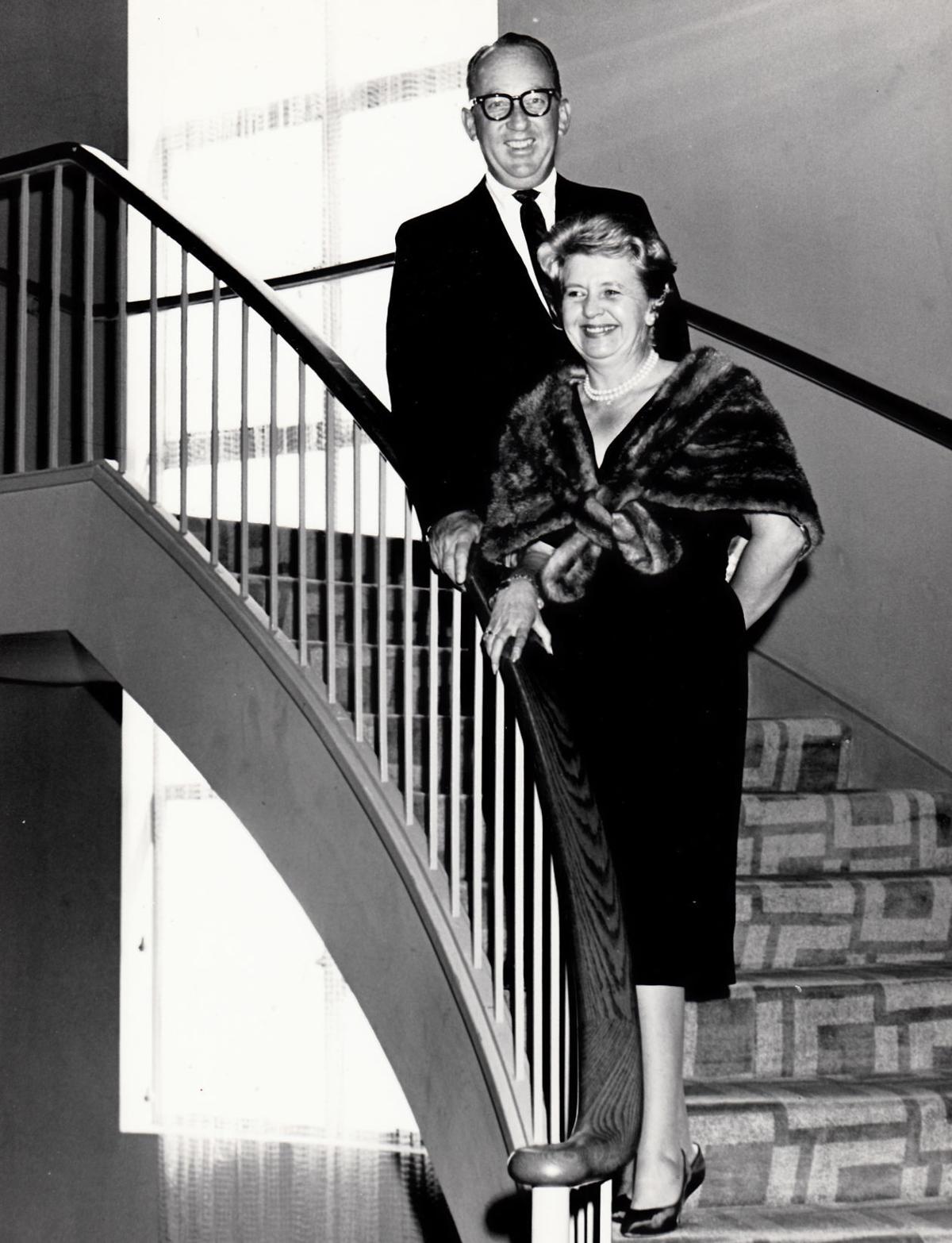 The south side’s Cameron Vista is named for the founder of Arizona Land Title & Trust Co. of Tucson, who also was involved in developing early housing for Hughes Aircraft employees and for Green Valley retirees.

On the lighter side, his claims to fame also included owning a palomino featured in a Gregory Peck movie.

Harry V. Cameron, who at one point owned 50 percent interest in Lawyers Title Insurance Corp. of Cleveland, Ohio — the city he was born and raised in — had moved his family to Tucson by 1943 due to his son’s asthma.

Cameron bought his horses Tommy, Duke and Lady from a cowboy named “Buck” Fletcher. Lady gave birth on Aug. 15, 1945 — V-J Day — to a palomino named Victoria Jane (Vicky). It was Lady who was cast in the 1946 film “Duel in the Sun” starring Gregory Peck.

In late 1945, Cameron founded the Arizona Land Title & Trust Co. of Tucson with temporary offices at 214 N. Court Ave. “For the first time the public of Tucson will be given title insurance with a cumulative legal reserve behind it,” he said in an interview. “This offers more security for the property owner than ever offered in Tucson.” His father-in-law, Percival L. Judd, was involved from the start, in time joined by Cameron’s brother Wilfred Jr., known as “Bud.”

While her husband and father were working at the new company, Florence Cameron involved herself in regional politics, being appointed a director of the Young Republican National Federation for an area comprising Arizona, California and Nevada.

The title company moved to 47 N. Church Ave. in 1947. By 1949, it had between 600,000 and 700,000 file cards in its title plant and a miscellaneous name index of around 65,000 names. It also possessed some 2.75 million images of instruments recorded at the Pima County Court House. That year the business became affiliated with the Santa Cruz County Abstract and Title Co. in Nogales, Arizona.

In 1951, Cameron expanded his business interests, establishing the Sunland Engineering and Development Co. along with partners Roy Drachman and Del E. Webb (namesake of Del Webb Boulevard), which was created to construct defense-worker housing for the new Hughes Missile Plant (now Raytheon Missile Systems) in Tucson.

Hughes Aircraft Co. gave 160 acres of land, south of 36th Street and east of Campbell Avenue, free of charge to Sunland Co. to build 400 units. The result was the Sunland Gardens and Sunland Vista subdivisions, with one of the first streets being named Cameron Vista.

According to Cameron’s son, Bruce J. Cameron, “The streets weren’t named by my father but likely either a friend or business partner of his, and when dad found out a street had been named in his honor he was both honored and a little embarrassed. He was afraid people would think he was trying to be a big shot.”

Around the same time, Cameron and his title company began researching the history behind some of Tucson’s old landmarks and commissioned a local artist, E. MacConnell, to sketch what they looked like in their heyday. For about six months, a series of weekly advertisements, featuring drawings of places such as Reid’s Opera House, Ft. Lowell and the Silver Lake Mill, ran in the newspaper and later were compiled into a book, “Landmarks of the Old Pueblo.”

Although he divided his time between Phoenix and Tucson, Cameron continued to reside in the Old Pueblo. By 1955, he had sold his ranch and moved his family to a home east of the Catalina Highway. The U-shaped, ranch-style dwelling of burnt adobe was designed by noted architect Josias Joesler (namesake of Joesler Court).

The following year, ground was broken for the new Arizona Land Title Building at the northwest corner of Stone Avenue and Alameda Street. Notables such a Arizona Gov. Ernest W. McFarland, Congressman Stewart Udall and Tucson Mayor Don Hummel used gold-painted shovels with the date of the ceremony, Sept. 4, 1956. More than a year later, the firm and its approximately 65 employees moved into the main floor and basement of the nine-story, self-titled building, which would also lease space to law, insurance and architect firms as well as to KTKT radio station and the Thunderbird Jewelry Shop.

Further growth led to a new escrow office being opened in Sierra Vista in 1960, and later Cameron’s title company acquired offices in Casa Grande and Kingman.

Outside of work, Cameron was passionate about community involvement. He was president of the board of directors in 1950-1952 for Tucson Medical Center, guiding the hospital through some tough financial times, including a necessary $500,000 fundraising campaign to pay off debt to keep the doors open, and raising funds for future medical facility expansion. He worked with John Sundt of Sundt Construction Inc. and Margaret Sanger Slee, founder of Planned Parenthood, to raise money for the hospital.

His son Bruce described how his father spent his leisure time: “He loved golf and as a member of the Tucson Country Club developed many friendships with local businessmen. Included in these were Roy Drachman, Alex Jacome, Leon Levy, Ted Schoenhair and H.P. Tovrea.”

In 1967, Cameron once again became involved in real estate, this time with partner Charles Richardson, when they purchased Maxon Construction Co., whose name was soon changed to the Tucson-Green Valley Development Co. Don Maxon and brother Norman Maxon were the early developers of the planned retirement community of Green Valley.

The next year, Cameron became very ill and was no longer able to run the company he founded; the reins were turned over to long-time employee John B. Wilkie.

David Leighton is a historian and author of the book “The History of the Hughes Missile Plant in Tucson, 1947-1960.” If you have a street to suggest or a story to share contact him at Streetsmarts@tucson.com

The area where Fred Roberts sold lots, near Alvernon Way and Fifth Street, was considered too far out to work.