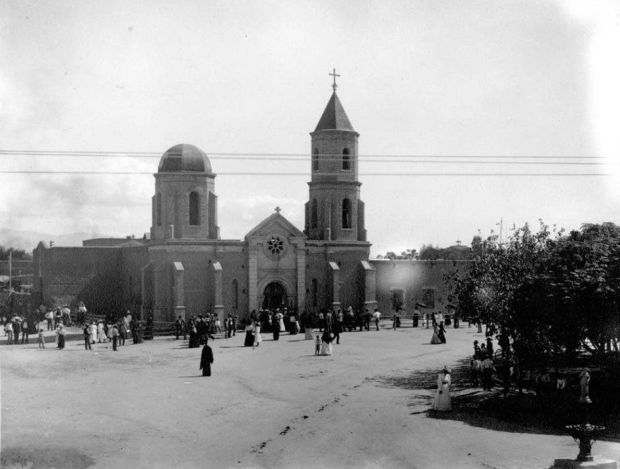 San Agustín Cathedral in Tucson in 1896. It was demolished in 1936 and the portal is on the front of Arizona Historical Society. 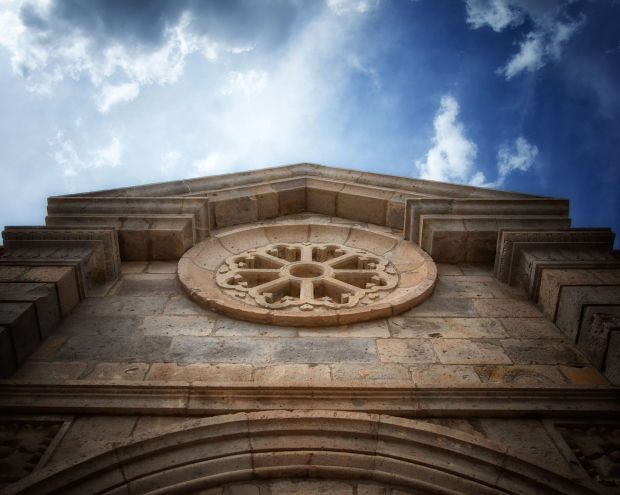 The facade of the historic San Agustín Church is at the entrance to the Arizona Historical Society, 949 E. Second St. 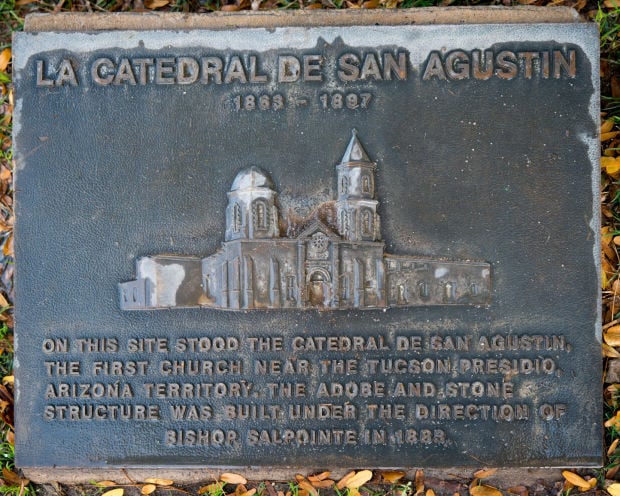 The plaque at Veinte de Agosto Park at Church and Broadway. The bottom year should be 1866, not 1883. 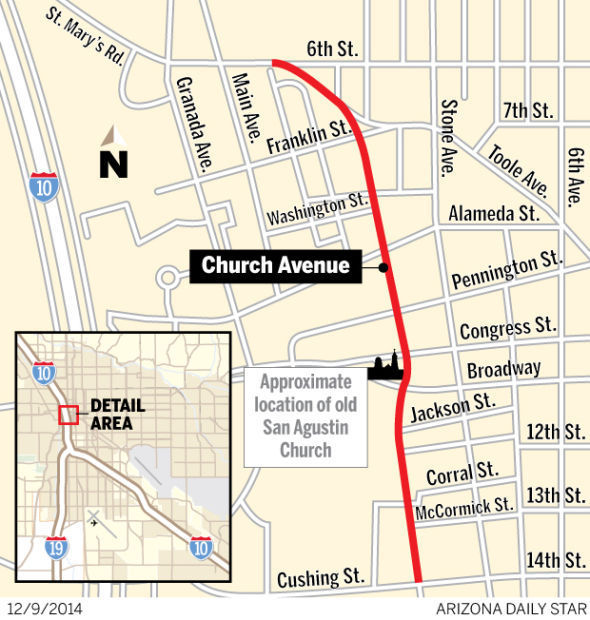 When Italian priest Father Donato Rogieri arrived from Santa Fe, New Mexico in 1862 or 1863, Tucson had a population of about 60 European-Americans and 500 Mexican-Americans, most of them Catholic.

The town consisted mostly of adobe houses near the Santa Cruz River. It had no house of worship, so Father Rogieri began working to build a church in honor of the patron saint of Tucson, San Agustín (Saint Augustine, in English).

In an interview in October 1927, pioneer Tucsonan Ana Maria Coenen, who was born in 1859, said this about the building of the San Agustín Church:

“The adobes were made on the property of Solano Leon, where the Manning House is now located. When services were over every morning, Father Donato would tell the congregation not to leave until he had changed robes. Then he would instruct them to follow him and they would go to the place of Solano Leon and each woman would return with one brick in her arms. Father Donato would carry one brick also. The entire church was built by the people of the parish.”

In late 1863, Father Rogieri left Tucson for Mesilla, New Mexico. The following year, Fathers Charles E. Messea and Aloysius Bosco arrived to fill the void. They spent most of their time performing marriages, baptisms and other church duties; their contributions to the growth of the fledgling church were minimal, and by the end of the year they were in California.

Because of the potential dangers of the voyage from Santa Fe to Tucson, Bishop Jean Baptist Lamy was hesitant to appoint clergy to Tucson. Instead, he requested volunteers and from among the faithful he chose John Baptist Salpointe (namesake of Salpointe Catholic High School).

Salpointe was born in Saint Maurice, France and spent many years as an educator in a seminary school before being recruited “for hard and dangerous service in the New World,” C. L. Sonnnichsen wrote in, “San Agustin: First Cathedral Church in Arizona.”

First arriving in Santa Fe, he eventually made the month-long, 600-mile journey on horseback, arriving in Tucson on Feb. 7, 1866. With the assistance of Don Juan Elias, a small residence was purchased for Salpointe near the site of the church, which at that point consisted of only four walls, each about 8 to 9 feet high.

Like his predecessors, Salpointe carried on the work — adobe brick laid upon adobe brick — until it was worthy of a proper pine roof. Due to the cost of transporting wood from the mountains by wagon team, a temporary canvas cover was placed over the unfinished church and services were held early in the morning to escape the blistering sun.

In 1867, Salpointe had workers build walls for a new adobe building adjoining the incomplete church, which would become a convent and girls school. Thanks to widespread support for a new school, money was raised for the roof of both the school and church. The lumber came from the Huachuca Mountains and the freighting company of Tully and Ochoa brought it to town free of charge. The Sisters of St. Joseph arrived in Tucson — then the capital the Arizona Territory — in 1870, to much fanfare and a building ready for school.

As the community grew, a larger and newer church was needed. Saint Augustine Church, on South Stone Avenue, was dedicated on Feb. 7, 1897. The opening of the new cathedral meant the closing of the old one. The old San Agustín Church was sold and turned into many different businesses — finally as a Shell gas station, painted bright yellow. In 1936 it was demolished and only the stone portal still exists, now over the front entrance to the Arizona Historical Society.

It is unknown when Church Street (now Church Avenue), which ran behind the old San Agustín Church was named, but it appears in several ads in the Arizona Citizen newspaper in 1871 and was likely named around that time.

San Agustín Cathedral in Tucson in 1896. It was demolished in 1936 and the portal is on the front of Arizona Historical Society.

The facade of the historic San Agustín Church is at the entrance to the Arizona Historical Society, 949 E. Second St.

The plaque at Veinte de Agosto Park at Church and Broadway. The bottom year should be 1866, not 1883.