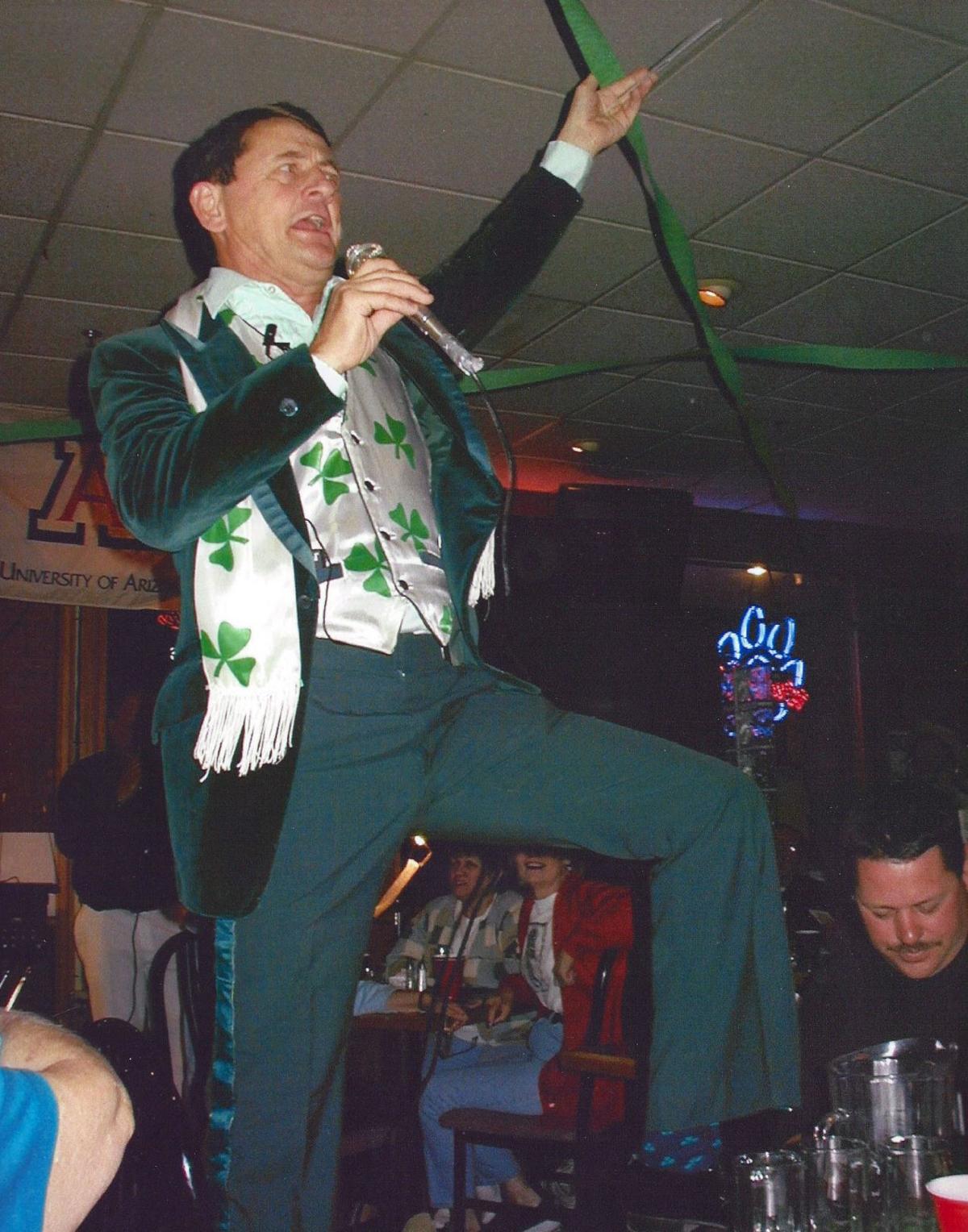 Sam O’Shaughnessy sings at one of the many reincarnations of his bar. 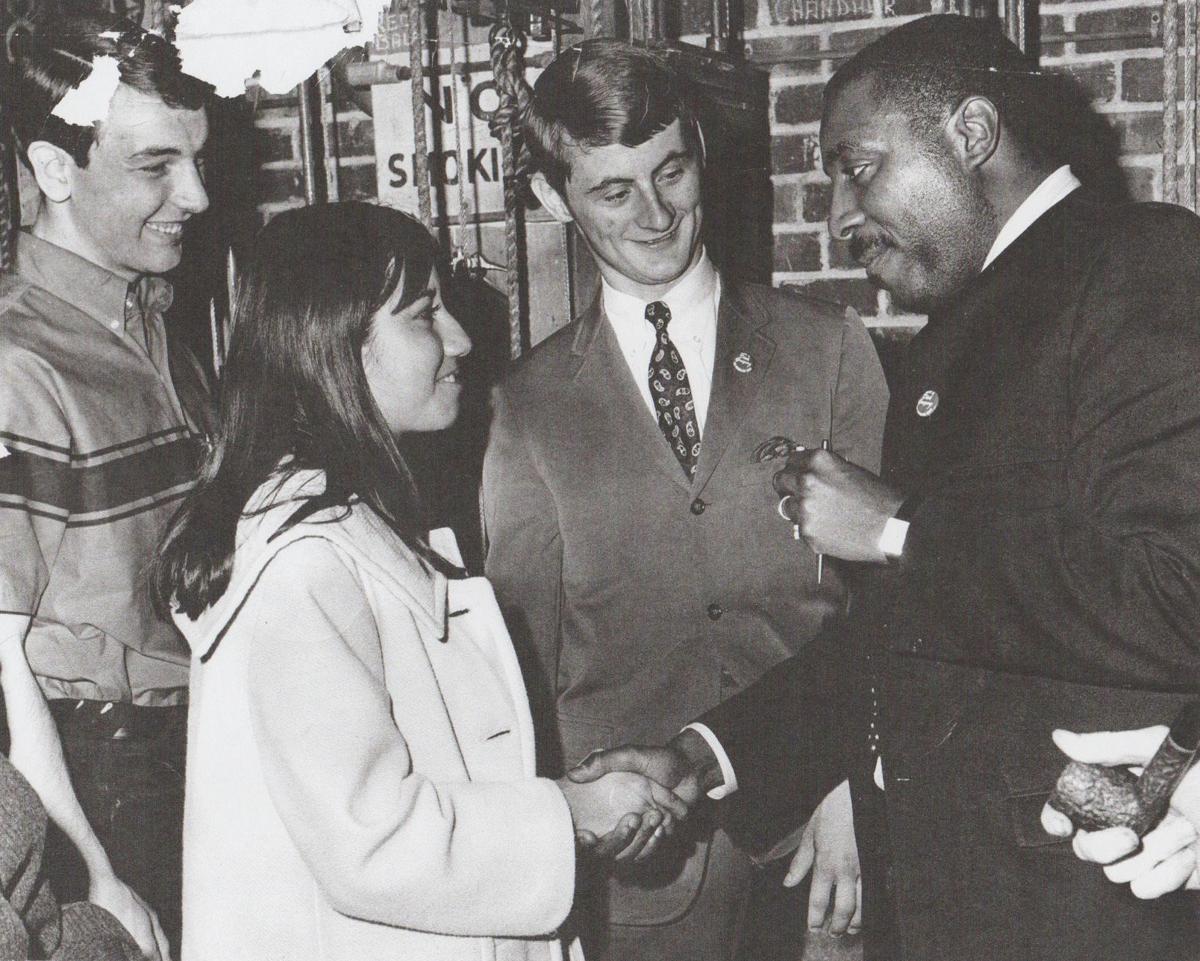 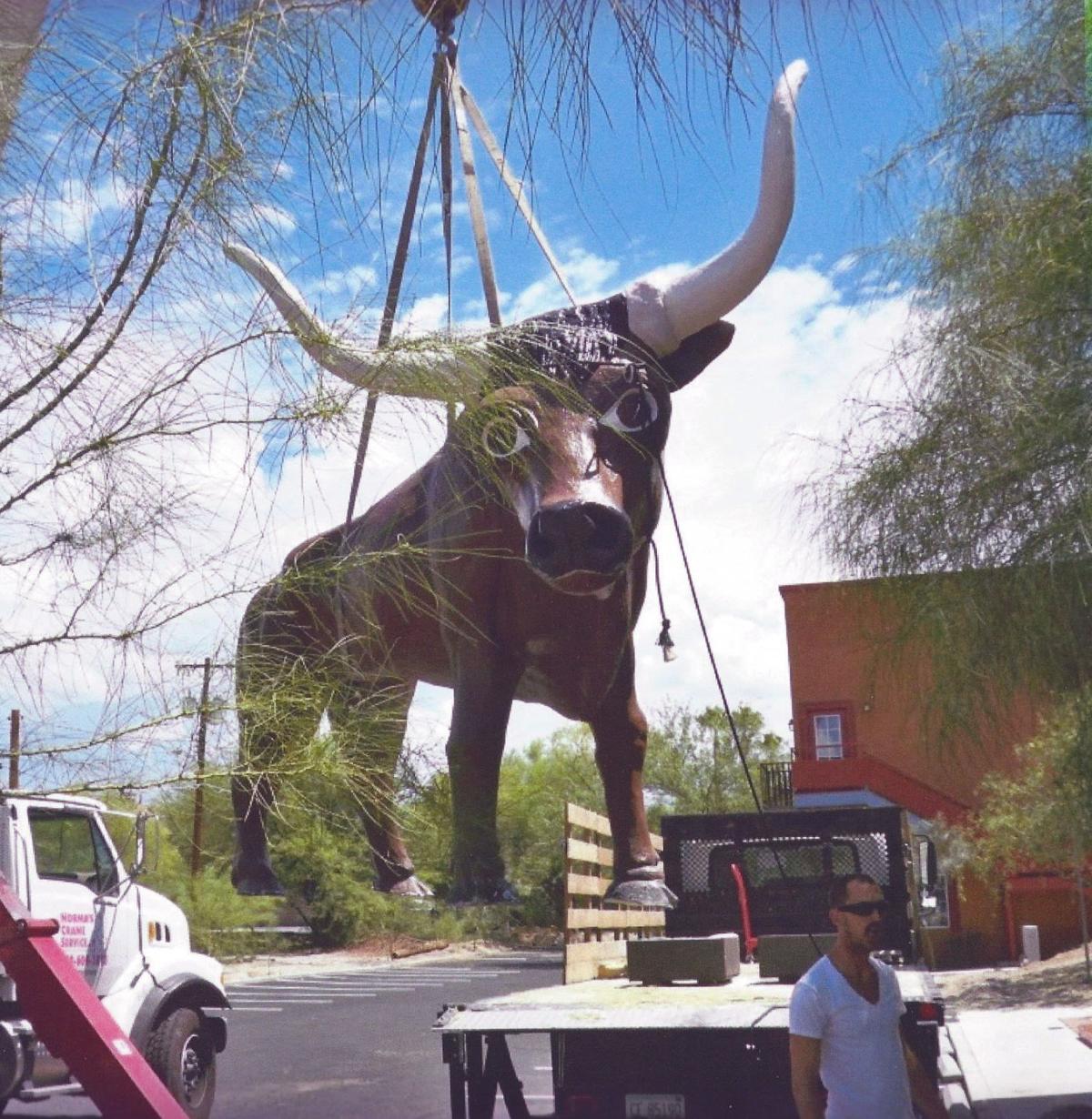 The bull from a closed miniature golf course was moved to O’Shaughnessy’s Song Hall and Supper Club in 2009. 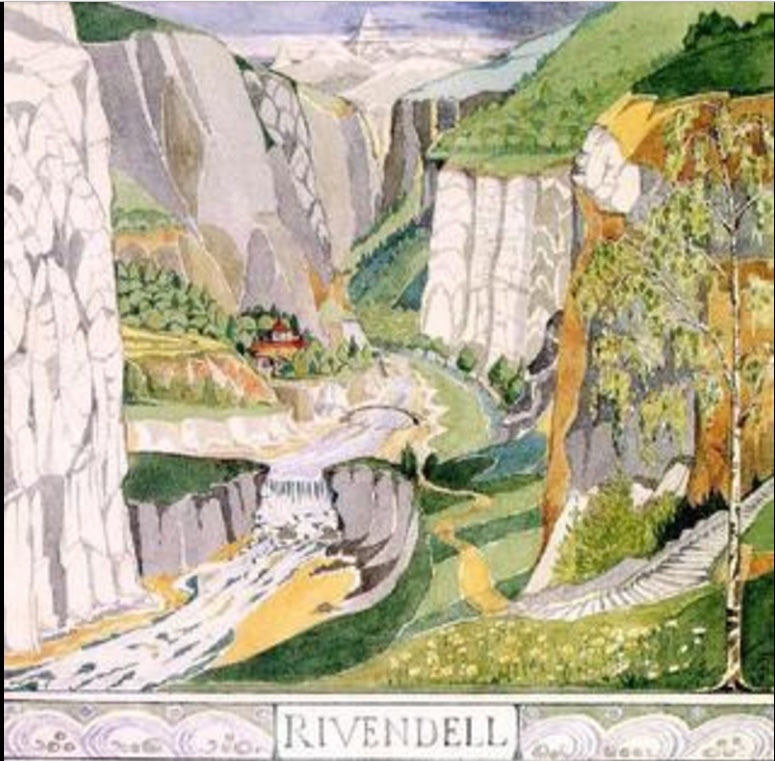 Rivendell a place in the books and movies The Hobbit & The Lord of the Rings. Stangl named his small subdivision after this fictional place.

Samuel O’Shaughnessy–Stangl fell in love with “The Hobbit” and the “Lord of the Rings” trilogy in high school. Years later, he was able to honor the J.R.R. Tolkien fantasy novels by naming a Tucson subdivision and its streets after them.

Born in 1946, O’Shaughnessy–Stangl spent part of his childhood in Buffalo, New York, where his father, Alfred, was the general contractor for the Prospect Point Observation Tower at Niagara Falls.

In 1961, the family grew weary of the brutal New York winters and relocated to Tucson. That’s where Sam, as a student at Salpointe Catholic High, discovered Tolkien and the trilogy he considers the greatest literary work.

He went on to the University of Arizona to major in history, but believes he spent more time in Student Union Room 106 — the meeting place of student government — than attending actual classes. Among other roles, he held the chairmanship of the Associated Students of Speakers Board. Speakers he brought to UA included Pierre Salinger, former press secretary to the late President John F. Kennedy; comedian-turned-activist Dick Gregory; and Clark Kerr, president of the University of California at Berkeley.

While at the UA, Sam pledged to the Delta Upsilon fraternity and took on a pledge project of lighting up the “A” on “A” Mountain. He bought 300 light bulbs, 700 feet of electric wire and borrowed a large generator from Hal Ashton of Ashton Construction Co., and along with his fraternity brothers strung the wire and lights on the “A” to be lit on Homecoming Day in 1965.

In 1967, O’Shaughnessy, who at this point had dropped the Stangl from his last name, remembers being at the Bay Horse Tavern on Grant Road with some of his fraternity brothers when three women walked in, looked around and headed toward the door. Upon seeing one of them, he immediately jumped up and screamed across the bar, “Room for three more!” and the women came over to his table.

Within an hour of speaking to one of the girls, Pipper, he told her he was in love and that within three months he would marry her. The next day she flew back to California and soon after told him, “If you want to marry me, you will have to move to California.”

So he did, putting a ring on her finger. In time the married couple would have children Samuel IV, Shauna and Saxon.

After three years in California, Sam told Pipper, “If you want to stay married to me, you will have to move back to Tucson.” The couple arrived back in 1970 and Sam took up the construction business.

There, he built a small townhouse subdivision he named Rivendell, for a place out of “The Hobbit” and “The Lord of the Rings.” He also named three streets after the books : Elvenstone Way (plural of Elf-stone), after an object that had magical power; Oakenshield Way, after Thorin Oakenshield, the king of the dwarfs; and Brandywine Lane, after a river in Middle Earth, where the books are set.

In the mid-1970s, Sam opened O’Shaughnessy’s Piano Bar on Grant Road and Tucson Boulevard. He and his singers sang traditional Irish songs and patriotic American numbers. One of the bar regulars was then-Mayor Lew Murphy, namesake of Murphy’s Overpass.

In 1979, a couple years after O’Shaughnessy read Jay Anson’s best-selling book “The Amityville Horror,” he purchased the Amityville Horror house itself, in Amityville, Long Island, New York. The allegedly haunted house had been made popular by the book and the movie of the same name.

O’Shaughnessy arrived in New York City on Aug. 3, 1979 to a gaggle of reporters. He got to walk around the infamous home one time but by the following day, lawsuits began flying over who should get the profits from the movie. The controversy was so big that within a couple years he sold the home and got out of the situation.

O’Shaughnessy today recalls with pride his development work at the old 49ers Guest Ranch. In the late 1970s, he obtained the 40 acres at the center of the old ranch on Tanque Verde Road from Hank Leiber, a former Major League baseball player. In 1980, O’Shaughnessy developed the property, and rather than tear down the old territorial-style adobe house that was one of the main ranch buildings, he renovated it and worked diligently to build the homes around the beautiful old mesquite trees rather than cut them down.

He decided to name the one and only street that surrounds the small subdivision Claim Jumper Square, in order to keep the Old West/Gold Rush theme given to the streets around this area.

During the 1980s, there were many changes at his O’Shaughnessy’s establishment. Around 1980, he relocated the bar to Tanque Verde Road, across the street from Golf ‘N Stuff. From 1983 to 1984, he ran an O’Shaughnessy’s in Green Valley and kept the bar in Tucson as well. The years 1986 to 1988 saw O’Shaughnessy and family residing in Puerto Vallarta, Mexico, running his Señor O’Shaughnessys. Next, he and his family returned to Buffalo and opened his Signore O’Shaughnessy’s Piano Bar and Song Hall, which existed from about 1988 to 1996.

The following year, he returned to Tucson. Around 2002, he bought land at Camino Principal, south of Tanque Verde Road, and constructed a new building for the reborn O’Shaughnessy’s Song Hall and Supper Club, which opened around 2005. Four years later he moved the large bull that stood at the Magic Carpet Golf miniature golf center to his place, where it stood at the entrance of the steakhouse.

In 2012, he closed O’Shaughnessy’s and has spent much of his time building unique clocks and sculpting mesquite trees in his neighborhood.

Special thanks to William Kalt III, author of High in Desert Skies: Early Arizona Aviation. David Leighton is a historian and author of the book “The History of the Hughes Missile Plant in Tucson, 1947-1960.” If you have a street to suggest or a story to share, contact him at azjournalist21@gmail.com

Sam O’Shaughnessy sings at one of the many reincarnations of his bar.

The bull from a closed miniature golf course was moved to O’Shaughnessy’s Song Hall and Supper Club in 2009.

Rivendell a place in the books and movies The Hobbit & The Lord of the Rings. Stangl named his small subdivision after this fictional place.