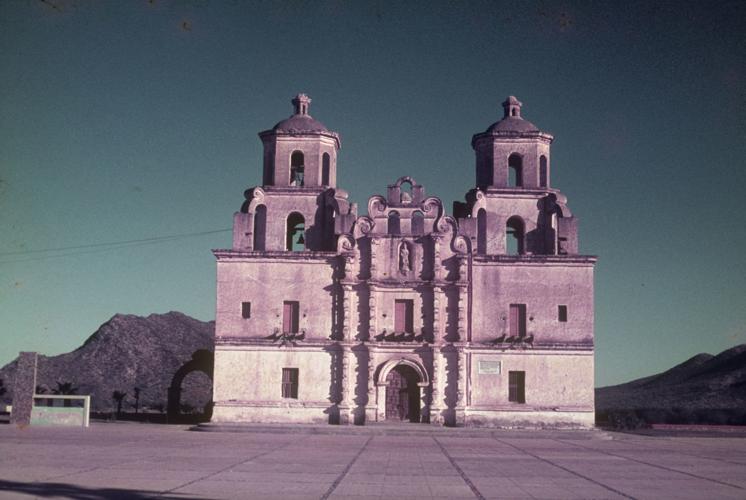 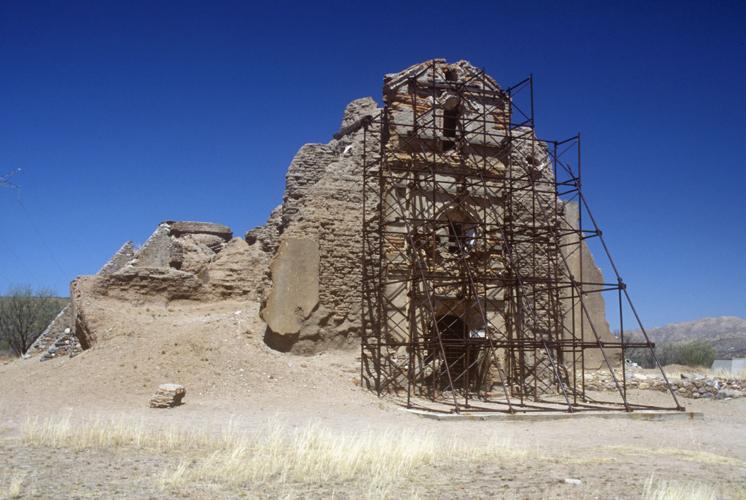 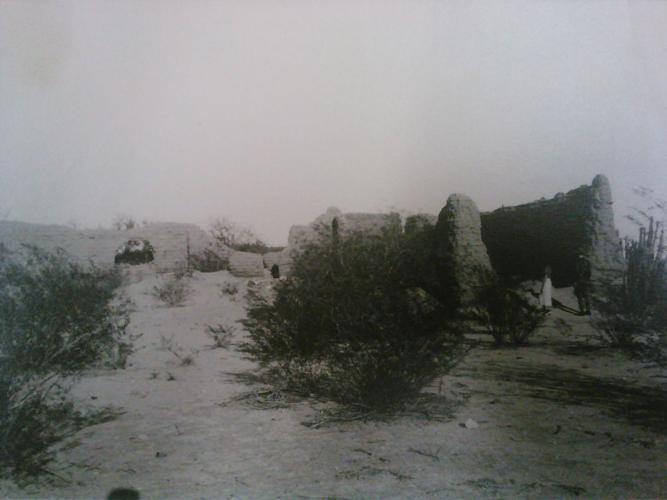 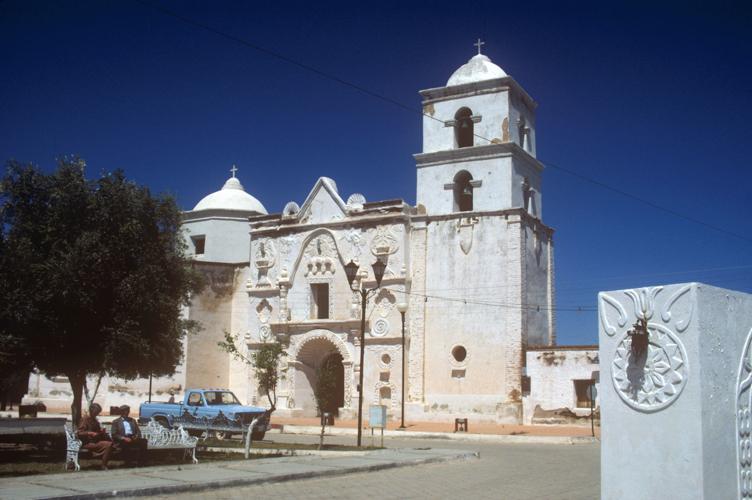 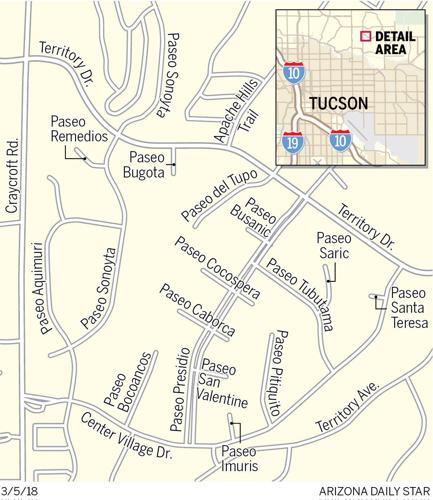 In 1971, Quentin Bryson, a Tucson real estate broker and developer (who is currently serving as chairman of the Tucson Planning Commission) and his partner, Paul H. Hvidsten, purchased approximately 1,800 acres of land on the southeast corner of Sunrise and Craycroft.

Bryson and Hvidsten formed the Sunrise Design and Building Corp. They built two subdivisions, Sunrise Presidio Village and Sunrise Territory Village, and in time sold off parts of the remaining land to other developers, including Fairfield Homes, which built Fairfield Sunrise East.

When it came time to name the streets in Sunrise Presidio Village, Bryson went to the University of Arizona Library and did extensive research.

In an advertisement that year for the new subdivision, he would explain his street name concept: “Each street is called a ‘paseo’, the Spanish word for trail or avenue. All of the paseos are named after selected Spanish missions founded by Father Eusebio Kino, the famous Jesuit missionary who explored much of what is now Arizona (and Sonora) over 300 years ago.”

All of the missions or visitas (collectively called missions here) Bryson chose were located in northern Sonora, Mexico:

Paseo Aquimuri: The San Bernardo de Aquimuri mission was on a stream near the Altar River. By 1701, Kino had established a stock ranch here, and by 1706 local converts had built a church for the small village. An Apache Indian raid in 1771 wiped out the population.

Paseo Bocoancos: The San Luis Bacoancos mission was on the Santa Cruz River, just south of the current U.S.-Mexico border. Kino began a cattle ranch in 1697 in the valley south of this site and by 1706 a church existed there, but repeated Apache attacks depopulated the mission and valley.

Paseo Bugota: The Santa Maria Suamca mission (originally called Bugota) was also on the Santa Cruz just south of the current U.S.-Mexico border. By 1710, Kino’s church was about finished, but it wasn’t until 1732 that a priest came to serve there. He was a strict priest and created much resentment among the Pima Indians. After the priest’s death in 1759, a new priest was installed and ran it until the Jesuits were expelled from Mexico.

Paseo Busanic: The San Ambrosio de Busanic mission was on the Altar River, fairly close to the current Arizona border. Its first church, constructed by the indigenous people, was described in 1698 by Kino as “a little earth-covered adobe church.” Kino and his carpenters built a larger church near the original. After Kino’s death in 1711, the religious structure slowly disintegrated and by the mid-1760s the village and mission are believed to have been abandoned.

Paseo Caborca: La Purisima Concepcion de Nuestra Senora de Caborca mission was near the Magdalena River and is noted for its violent history. Its first priest, Francisco Xavier Saeta, was killed by rebelling Pima Indians in 1695. Three years later, missionary Gaspar Barrillas fled due to the threat of further uprisings. In 1751, Father Tomas Tello and at least 11 others at the mission were slain and the mission property destroyed in another Pima uprising. In 1857, most members of an expedition by American Henry Crabb were killed and its leader was beheaded at Caborca.

Paseo Cocospera: The Nuestra Senora del Pilar Y Santiago de Cocospera mission was on the Babasac River, a tributary of the Magdalena River, southeast of present-day Nogales, Sonora. The site was occupied from about 1690 to about 1845, covering both the Jesuit and Franciscan periods, and in that time there were five or six churches there. One was built by Kino starting in 1702, and there is evidence to suggest workers from San Xavier del Bac near Tucson went down to help build its adobe walls. It was dedicated in 1704 by Father Adamo Gilg, who preached the dedicatory sermon in the Pima Indian language.

Paseo Imuris: The Senor Jose de Imuris mission was founded by Kino in 1687. Both John Russell Bartlett and J. Ross Browne visited this site in the mid-1800s and later wrote about it in their well-known books.

Paseo Pitiquito: The San Diego del Pitiquito mission was near Caborca. There were three churches during its existence, including a little adobe one Kino supervised the construction of in 1706, and which was gone by 1730.

Paseo Remedios: The Nuestra Senora de los Remedios de Doagibubig mission was located on the San Miguel River and existed for but a short time. Kino began work on the church in 1695. In 1701, fortifications were added. By 1730, the church was in ruins, with the settlement having but 10 families, and by 1750, not a single person lived there.

Paseo Santa Teresa: The Santa Teresa del Adid mission was on the Altar River. Around 1701, Kino established a stock ranch here and at some point a church was built.

Paseo San Valentine: The San Valentin de Bisani mission was southwest of Caborca and near Puerto Lobos, which is on the Sea of Cortez. Kino supervised construction of its first of two churches. The mission was in existence at least until 1830. In 1967, the remains included a fair amount of adobe wall and many graves in the cemetery.

Paseo Saric: The Santa Gertrudis del Saric mission was on the Altar River. In the first decade of the 1700s, Kino built a church here, and during the time the Jesuit and Franciscan missionaries oversaw the region, it was a head church of the area. When a resident priest was available, he was normally stationed here. Resident priests would also visit smaller missions to carry out baptisms and marriages.

In 1776, a force of Apache, Seri and Suma Indians raided the mission, but the church was left unharmed. The town of Saric still exists.

Paseo Sonoyta: The San Marcelo de Sonoyta mission was near present-day Sonoyta, Sonora, near today’s U.S.-Mexico border. Kino founded this mission at the Sonoyta meadows, which was the only stopping place with a dependable water supply and forage for horses along the ancient route called El Camino del Diablo, or The Devil’s Highway, from Caborca to Yuma, as a way station for a route he hoped to create from the Sonoran missions to California.

Paseo Tubutama: The San Pedro y San Pablo del Tubutama mission was on the Altar River and was one of the most important of the Kino missions. It’s believed to have had six churches from about the 1690s to about the 1810s, including the one Kino paid for and supervised construction of in the early 1700s. The present magnificent church dates to the Franciscan period.

Paseo Del Tupo: Very little is known about the San Miguel Del Tupo mission, including its location, although some maps put it near a tributary to the Magdalena River. About the only thing known for sure is that Kino mentions the mission in his writings.

Two streets in the subdivision are not related to Father Kino’s missions. Paseo Presidio derives its name from the Presidio de San Agustín del Tucson, the original garrisoned fort that is sometimes called the birthplace of Tucson, located in what is now downtown; and Center Village Drive.

Special thanks to James Griffith for research assistance on this article.

David Leighton is a historian and author of the book "The History of the Hughes Missile Plant in Tucson, 1947-1960." He has been featured on PBS and the Travel Channel. If you have a street to suggest or a story to share, contact him at azjournalist21@gmail.com 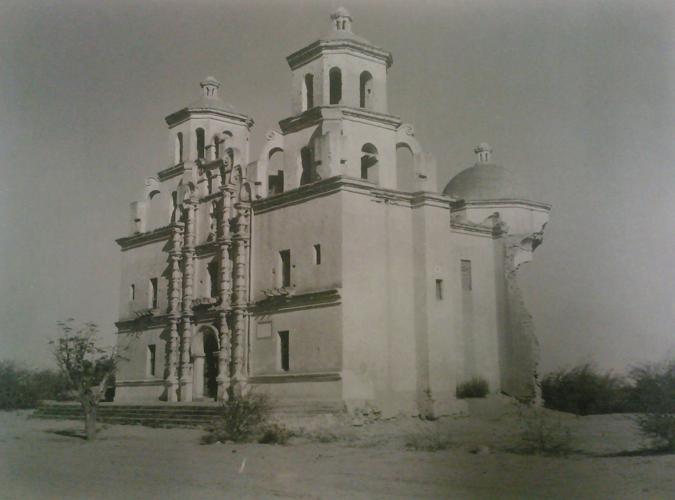 This church in Caborca was built in the 1780s, over where Father Eusebio Kino had built a church earlier. 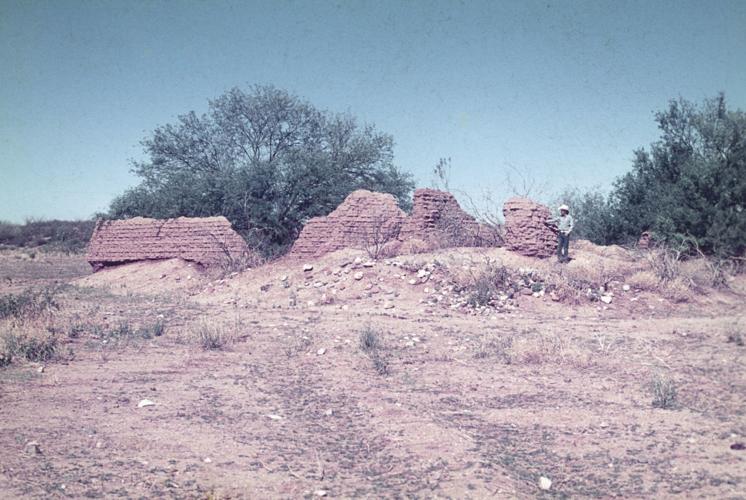 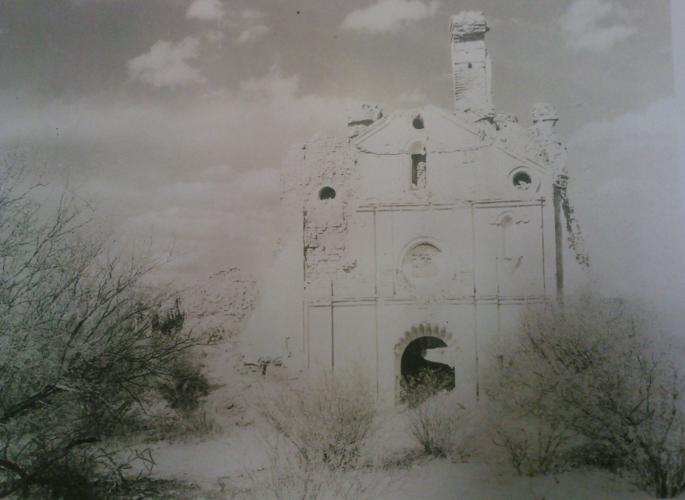 A church was built by Kino here at Cocospera. Later his structure was incorporated into this church by the Fransicians. Photo taken in 1934. Courtesy of UA Special Collections 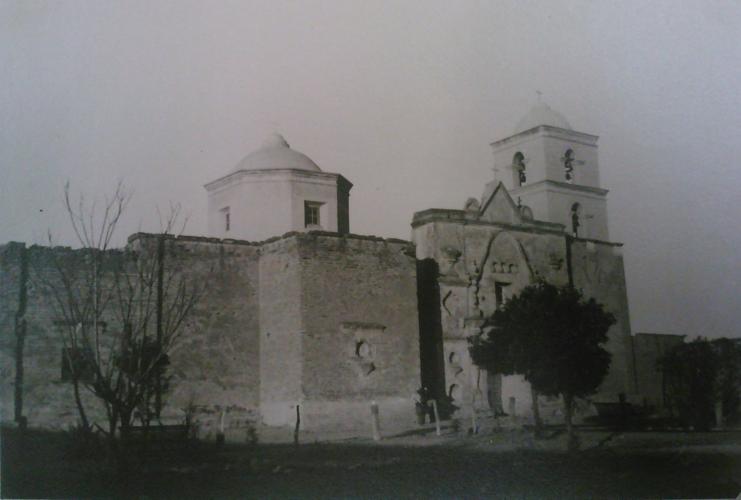 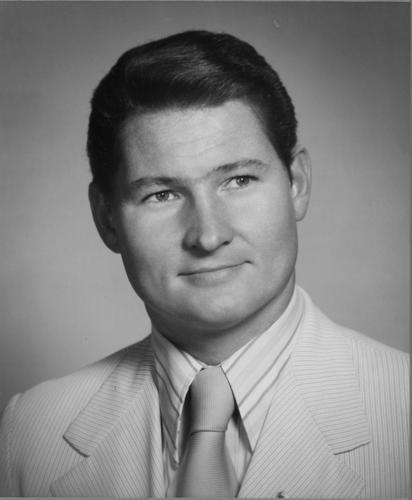 Quentin Bryson in 1972, as president of the Tucson Board of Realtors.