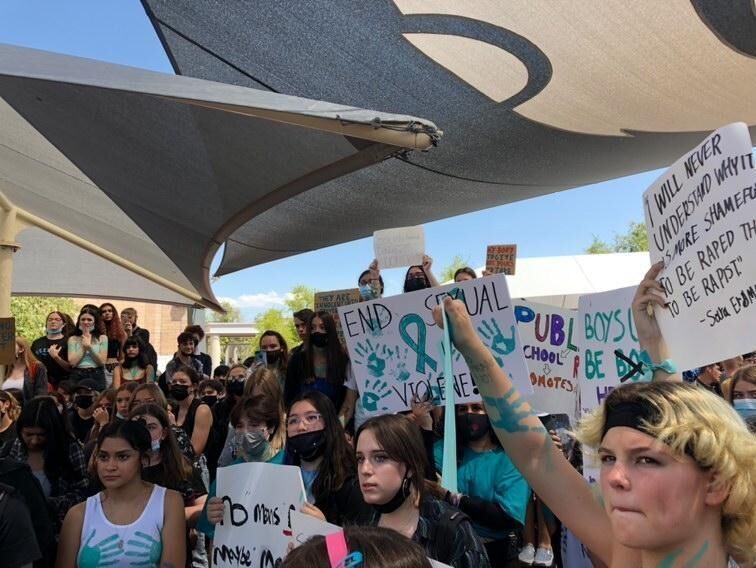 Students at Mountain View High School demand better services for victims of sexual misconduct and an end to sexual violence. This demonstration was on Friday. 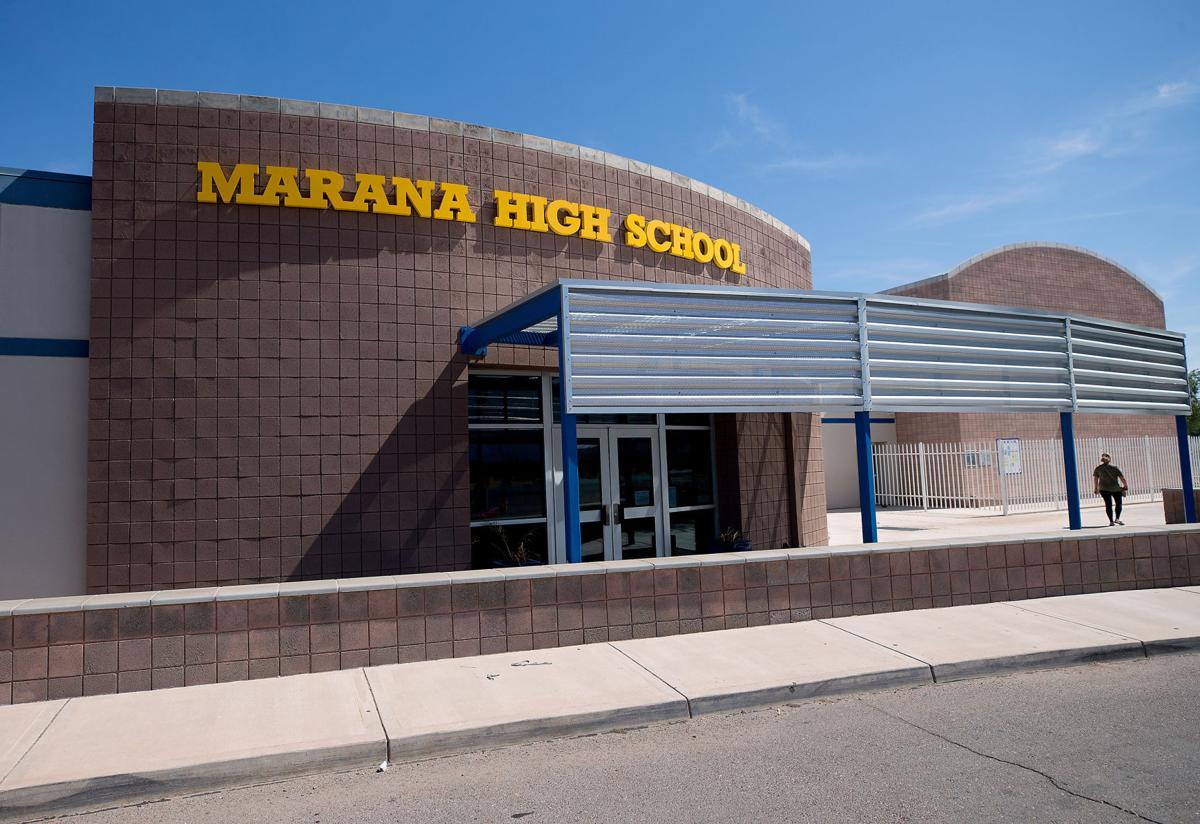 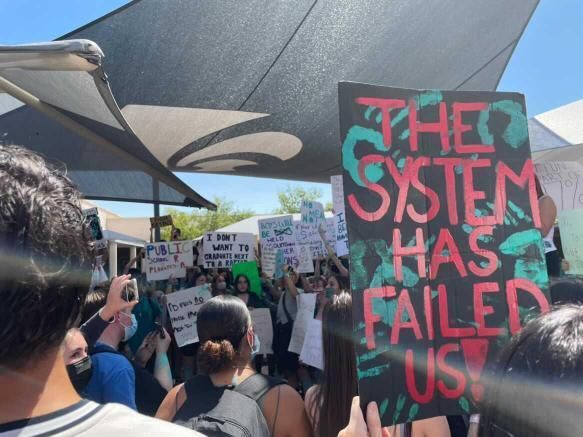 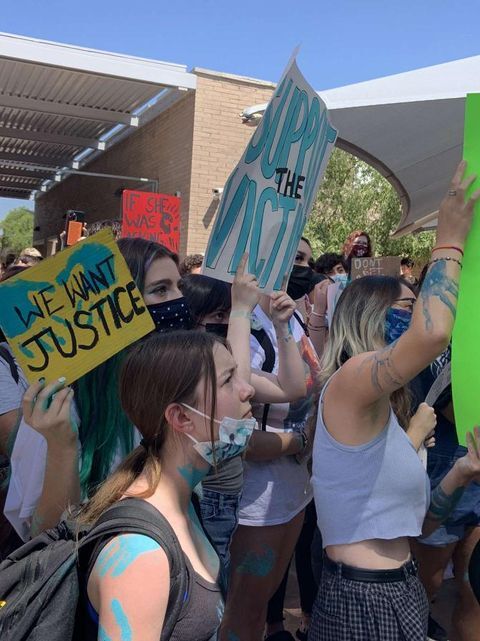 Students protested at two Marana Unified high schools last week over what they say was an inadequate response from the district to a student’s report of an alleged sexual assault by another student.

The 15-year-old student, RayAnn Honea, who made the report to her school in April, started the first protest, with an estimated 200 students attending at Marana High on Tuesday.

Honea said the school didn’t help her and that she endured continued sexual harassment from her alleged attacker. As well, she said the school culture allows incidents of sexual misconduct to happen.

“We have freshmen at our school right now that are being sexually harassed,” she said. “It’s a huge issue at our school.”

Although the Arizona Daily Star doesn’t typically name victims of sexual assault, we are doing so in this case at Honea and her family’s request because she felt it was important to tell her story.

Honea said she reported to the school administration being sexually assaulted off campus by a fellow student. She says the school asked her if she wanted to file a police report but offered her no further services, such as counseling or intermediary services to keep from having to come in contact with her alleged attacker.

Honea’s mom, Ashley Fraley, said the school initially called her and made a police report but then neither the school nor police ever followed up with her. The first follow up Fraley received was a call from the Children’s Advocacy Center of Southern Arizona about her daughter’s report the day of the protest, she said.

The Marana Police Department didn’t immediately respond to the Star’s request for information about this case.

The district can’t legally comment on Honea’s report, but officials said they have stringent protocol and processes for managing sexual assault allegations, and have promptly investigated and/or turned over to law enforcement agencies every concern the district has received related to this event or similar events.

The district has filed multiple such reports this year and last with law enforcement and the state Department of Child Safety, a district spokeswoman said.

The district also said any informal complaint is shared with a staff member and that the staff member contacts parents and offers the student supportive measures.

But Honea said she wasn’t offered any services, but rather found her way to a school counselor on her own when the emotional toll of the incident and ongoing harassment by her alleged attacker became overwhelming.

Honea’s cause has gained attention online and on social media over the last week as well. She started a Change.org petition calling for additional services at her school for survivors of sexual assault and violence, and as of Friday evening the petition had garnered more than 17,000 signatures.

There was another protest at Marana High on Wednesday and one at Mountain View High, also in the district, on Friday, which drew about 200 students.

The protest was during lunch, and students showed up wearing teal, the signature color for sexual assault awareness, and holding signs that called for accountability and an end to sexual violence.

A number of students spoke to the crowd, giving heartfelt speeches about their own encounters with sexual violence and the ways they have been taught it was their fault. Mountain View senior Roo Key, 17, spoke at the protest and helped arrange it.

She said the protest isn’t about starting a quarrel with the district but rather to call for change.

“We don’t want to diss our entire school district, but we do want them to understand that we need better support,” she said. “I think one of the most clear points that me and my peers have agreed on is if we are putting our issues and lives into the hands of adults, how are we supposed to trust them when they can’t even help us with things as serious as sexual assault and rape? People always view this issue as an adult issue, but clearly it’s not only that.”

“But at school, it’s supposed to be a safe environment,” she said. “How are students supposed to feel safe if you’re suspending them for protesting or the outfits they wear but not suspending those who are doing illegal actions? This just makes you feel very uncomfortable, and it’s not safe.”

Following the protest that Honea led on Tuesday at Marana High, the school administration issued her a restriction from returning to school for “social media intimidation.”

Honea and her mom said she never participated in any “social media intimidation” and that the school told her to stay home for three days.

Marana Unified can’t legally comment on disciplinary measures of specific students but officials said students who engaged in conduct inconsistent with the district’s discipline policy may have been suspended for activities related to the protest.

Going forward, the district is going to provide training to students on how to use appropriate channels to share concerns and complaints regarding Title IX issues. The district is also considering adding student support groups for students who are survivors of sexual assault and sexual violence, as well as other supportive and educational services.

“There are checks and balances within our system to ensure that educators, schools and districts manage reports effectively, based on current policy,” Marana Unified said. “Every check within our system has demonstrated that we have been effective in reporting on these types of cases to date. That said, there is clearly evidence that we can do more to support students in terms of education about these issues and with resources if terrible events happen to, or around, them.”

Key, Honea and Barrios say sexual harassment at school is commonplace, and they feel it’s normalized by the culture in the schools.

TUSD to appeal ruling that could cost district taxpayers $10M

With all schools open, enrollment at Tucson's school districts is increasing after a huge exodus of students during the height of the pandemic.

Father, two other men, went to Mesquite Elementary School to confront principal. Men carried zip ties and said in livestream they were prepared to make a citizen's arrest.

Some exposed students come to campus when they should be in quarantine.

Students' proficiency in math, English falls in Tucson and across state

The number of students who passed both English language and math standardized tests this spring is substantially lower than pre-COVID-19 results, reiterating how the pandemic has impacted student learning.

For Star subscribers: The district is the first one in Tucson offering a vaccine incentive to employees.

TUSD said it will keep mask mandate in place after state ban goes into effect Sept. 29.

The STEMAZing/SARSEF Elementary Edison Robotics Pilot in fourth and fifth grade classrooms is set to start in Amphitheater, Marana and Tucson …

Tucson's private schools have an advantage to public schools in staying safe during COVID.

Tucson Unified will keep its mask mandate in place, Marana district will drop its mandate Wednesday.

For Star subscribers: The controversy around the pandemic is tearing school communities apart, hurting both students and educators, teachers and parents say.

A ticket to college for 38 Tucson kids, thanks to recycler

For Star subscribers: Tucson Iron & Metal has committed to paying the equivalent of two years at Pima Community — about $10,000 — for each of 38 fourth-graders at Mission View Elementary.

Students at Mountain View High School demand better services for victims of sexual misconduct and an end to sexual violence. This demonstration was on Friday.