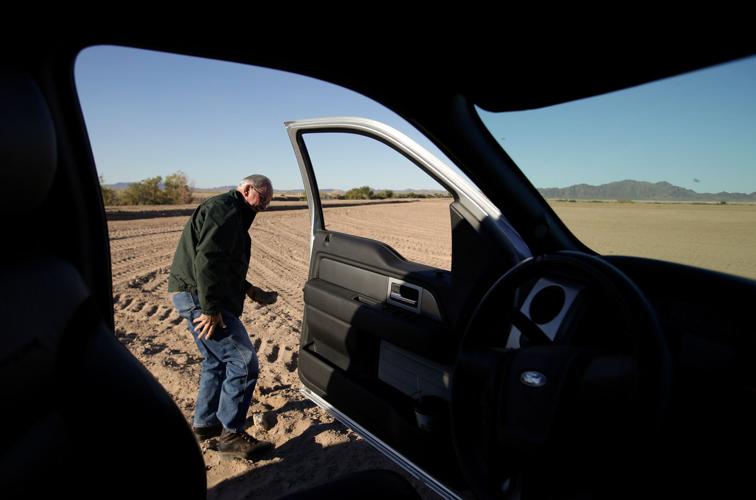 Bart Fisher, farmer and vice president of the Palo Verde Irrigation District, examines farmland in 2015 that was left fallow in Blythe, Calif. 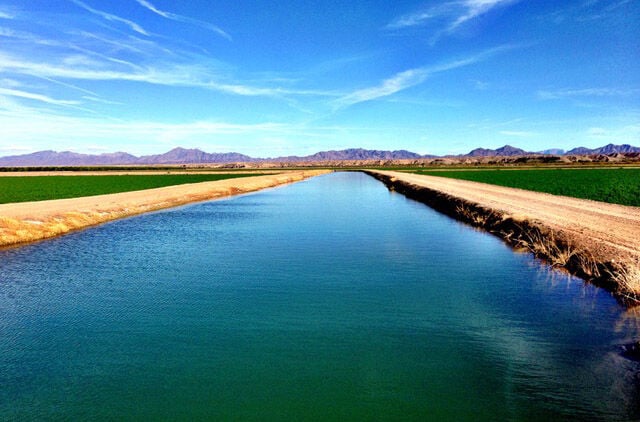 Farmers along the Colorado River in Southern California will be paid $38 million to leave up to 20 percent of their land fallow for the next three years in an effort to stem a bit of Lake Mead’s chronic decline.

The Central Arizona Project, the U.S. Bureau of Reclamation and water agencies in Southern California and the Las Vegas area are jointly giving that money to the Palo Verde Irrigation District. It’s located in the Blythe area just west of Ehrenberg, Arizona, about 190 miles south of Hoover Dam.

The water savings resulting from this fallowing will prop up Mead 3 feet higher than it otherwise would be, the water officials say. The program will save up to 180,000 acre-feet of water over three years. That’s almost twice as much as Tucson Water customers use in a single year.

Numerically that’s a drop in a very large bucketful of disappearing Colorado River water. Its entire reservoir system lost 7 million acre-feet of water in the past year because of the continuing drought.

But the 3 feet saved by the Palo Verde fallowing could delay for at least a year the onset of a more severe CAP shortage than the one that will start next year, CAP officials say. That outlook is based on the most recent monthly forecasts of Colorado River operations released Wednesday and in mid-August by the U.S. Bureau of Reclamation.

As recently as July, the bureau predicted that by the end of 2022, Mead would most likely drop just below 1,050 feet. At that level, the CAP would be in a shortage in 2023 for the second straight year.

But the 2023 cutback would be more severe than the shortage that’s already been approved for 2022, one that would mainly cut CAP deliveries to Pinal County farmers. The second level of shortage, known as a Tier 2 shortage, would also cut CAP supplies to some Phoenix-area cities and some Indian tribes, although not to Tucson Water.

Now, because of the Palo Verde fallowing, the bureau predicted both in August and September that Lake Mead will stay barely above 1,050 feet at the end of 2022, preventing the Tier 2 shortage from occurring.

CAP board members who approved the deal last month say this kind of collaborative effort is one of many steps needed to keep Lakes Mead and Powell from falling to critically low levels in the near future.

Officials of the irrigation district and Southern California’s Metropolitan Water District have said the same thing, and expressed hope that future such fallowing agreements can be struck. The Southern Nevada Water Authority is also participating in this program.

Terry Goddard, the CAP board’s president, said at an August board meeting of the project that he has seen several other proposals that are in the works for similar fallowing deals involving the water project. In a recent interview, however, Goddard declined to provide any more information about those proposals, even whether they involve Arizona or California farmers.

“All I can say is there are some on-river users we are talking to about fallowing,” said Goddard, a former Arizona attorney general. It’s very preliminary. As I have a historic view of our water relations with California, frankly it makes me very nervous potentially paying money to these guys…

“It’s political dynamite as you know, when you’re talking to farmers about fallowing,” he said.

Goddard was referring to past disputes and periods of tension that have happened off and on over the years concerning efforts by urban water users in Arizona and the West to buy out or temporarily fallow farmland to get access to the water. At times, farmers have embraced this tactic. At other times they have resisted, often quite strenuously and successfully, particularly along the Colorado River in Arizona.

CAP spokeswoman DeEtte Person, however, told the Star after Goddard spoke with the paper that, 'There are no other proposals under consideration at this time."

Palo Verde farmers have been fallowing lesser amounts of land since 2005 to save water that went directly down the California Aqueduct from Lake Havasu on the Colorado River — downstream of Lake Mead — to the Los Angeles area. In this case, however, Palo Verde district officials were willing to temporarily sell their rights to a larger amount of water and to fallow more land than normal for three years because the water will be left in Lake Mead — not sent to Los Angeles, the district’s general manager said.

“You better believe it’s more acceptable,” said Palo Verde General Manager Ned Hyduke. “It would be a hard sell if it was just going to Metropolitan, going into the city. With the drought and everything that’s going on, they want to see something happening to help Lake Mead.”

Financially, the price the district will get for the land it is fallowing is roughly the same as what it would have received if the farmers kept farming, said Bart Fisher, the district’s vice president. The water saved would have otherwise been put onto the district’s alfalfa, wheat, cotton, vegetable and melon fields.

Because of its long history of fallowing, “we sort of jumped that emotional hurdle already, and then the motivating factor I think in this case is to do what we can to support the elevations at Lake Mead,” said Fisher, a former Palo Verde board president.

The farmers are less concerned about the immediate hope that this fallowing will delay the onset of a second-tier CAP shortage than they are about keeping the lake from falling much farther, Fisher said.

He referred to a Sept. 12 Star article in which Arizona Department of Water Resources Director Tom Buschatzke warned that “dead pool” — in which the reservoirs fall so low that no water can be removed from them — is a real possibility. So far, federal computer models have forecast a very remote possibility of that happening, at least in the next five years.

“Modeling is never accurate, but it indicates trends, and the trends we see right now are not good,” Fisher said. “Even if the fallowing doesn’t prevent us from dropping into Tier 2, it will slow down the depletion at Lake Mead. It’s going to be helpful.”

The district’s farmers are thinking that if like-minded agencies and farmers up and down the river can conserve water and contribute to Lake Mead, “that 3 feet might become 10 or 20 feet. Then you are talking about something that’s very substantial,” Fisher said.

A similar hope — that this fallowing could set a precedent for others — was expressed at CAP’s Aug. 5 board meeting by Phoenix-area board member Mark Lewis.

“It seems to me we oughta be talking to farming communities and finding ways for temporary conservation, for 36 months, much like the proposal we have,” said Lewis, shortly before the CAP board unanimously adopted the Palo Verde proposal. “I appreciate these conversations are hard.”

But he noted CAP does have a track record of having run a temporarily fallowing program in the Yuma area.

“As we look at a significant decline in the reservoirs over the next 36 months, there’s opportunities for us, farming conservation projects for these irrigation districts, beyond Palo Verde, (that) we haven’t done yet.

“We need to work on them harder, because the alternative is to build billion dollar desalters in Mexico, with the cost of water … not to mention the environmental impact,” he said, speaking of the possibility of building desalination plants to purify water from the Sea of Cortez west of Sonora.

“I appreciate all of these options are on the table. But Arizona farmers and Imperial Valley farmers (in Southern California) ought to be a planned focus of our conservation toolbox because that’s where the water is.”

-- Of the fallowing plan's $38 million cost, half will come from the U.S. Bureau of Reclamation. The Central Arizona Project, the Southern Nevada Water Authority and the Metropolitan Water District of Southern California will split the remainder of the tab.

-- In  the program's first year, which began in August, fallowing will be voluntary. Farmers can choose to fallow up to 19,461 acres out of 25,600 acres eligible for fallowing.

-- In its second and third years, it will be mandatory for farmers to fallow 19,461 acres.

-- In all, 60,000 acre feet a year of Colorado River water will be saved annually due to fallowing.

For Star subscribers: Real fears exist that the two big lakes on the drying Colorado River could fall so low that no water could be taken from them, Arizona water director Tom Buschatzke recently told a private conference, reports say.

For Star subscribers: The company says its land on the slope facing Green Valley is large enough to hold waste-rock and tailings disposal. That could allow it to mine with much less federal oversight.

For Star subscribers: The closures come as a group gears up to try to rein in the unregulated agricultural pumping that state officials say has caused the land subsidence that triggered the fissuring.

A $4.1 billion desalination plant: The wave of Pima County's future?

For Star subscribers: Pima County officials say a controversial proposal to build a plant in Sonora to remove salt from seawater, then pipe the water 200 miles to Tucson, should be part of the discussion about our water future.

Pinal County farmers will lose about 40% of their Central Arizona Project water in 2022.

Once again, Arizona hopes to import out-of-state water in face of crisis

In the West, the longstanding tradition is that when you don’t have enough water to serve your city or state, you take it from somewhere else.

Users of dwindling Colorado River admonished: 'We all need to get off our high horses'

For Star subscribers: Arizona, California and Nevada are reportedly working on a plan to quickly save at least 500,000 acre feet from Lake Mead — enough water to serve Tucson for five years. "Thinking that your water use is justified, and no one else’s is, is not helpful," one expert warns.

For Star subscribers: Arizona is dropping another $30 million in to buy — or, at least, rent — some water rights to help stave off further drought-related cuts in Arizona's supply from the Colorado River.

The plan OK'ed Thursday by the CAP board calls for Arizona tribes to save the most river water, at over 100,000 acre feet. Another category of savings, totaling 50,000 to 60,000 acre feet, could come from urban, tribal or agricultural users. That's enough to serve Tucson for at least half a year.

Arizona plans to create agency to find, pay for new sources of water

The Arizona Water Authority would search for and finance the water the state will need if it hopes to support its current population and grow.

Bart Fisher, farmer and vice president of the Palo Verde Irrigation District, examines farmland in 2015 that was left fallow in Blythe, Calif.