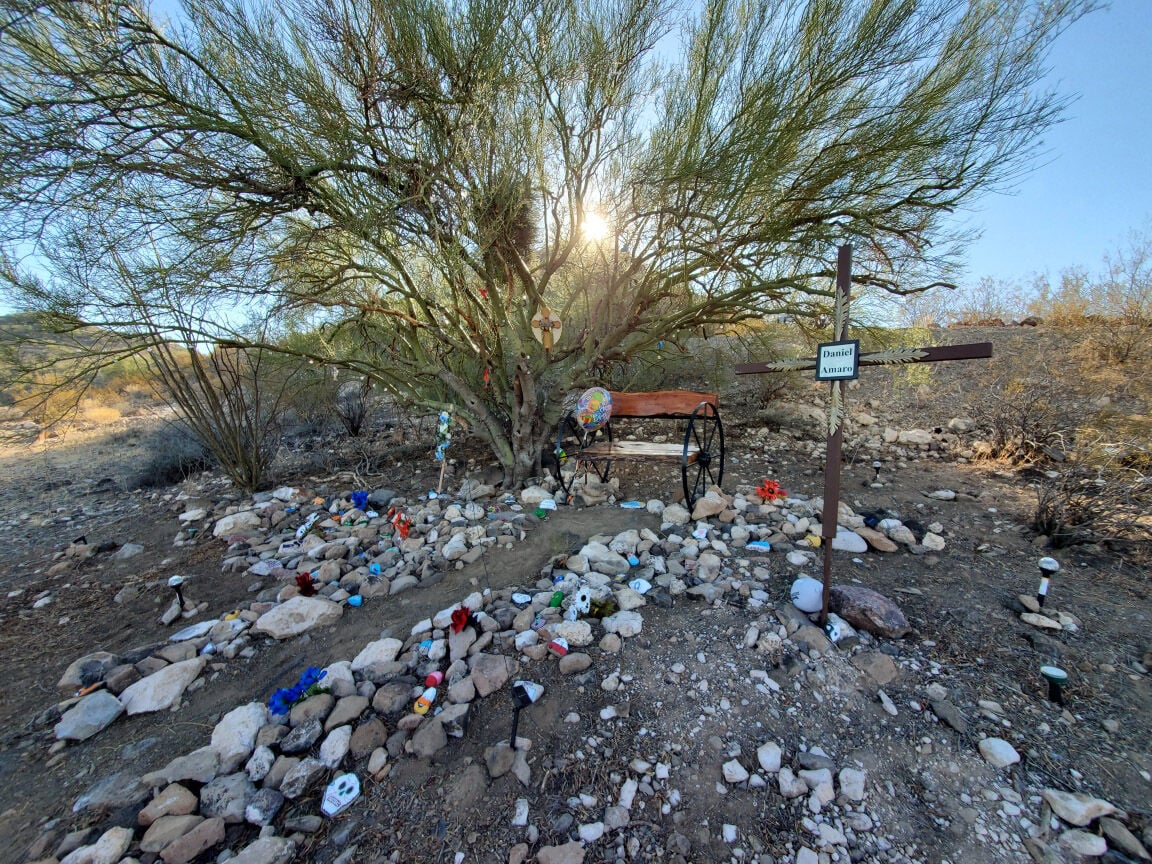 This memorial on “A” Mountain honored a UPS worker who died of COVID-19. His wife was “heartbroken and devastated” when the city removed the bench and crosses. 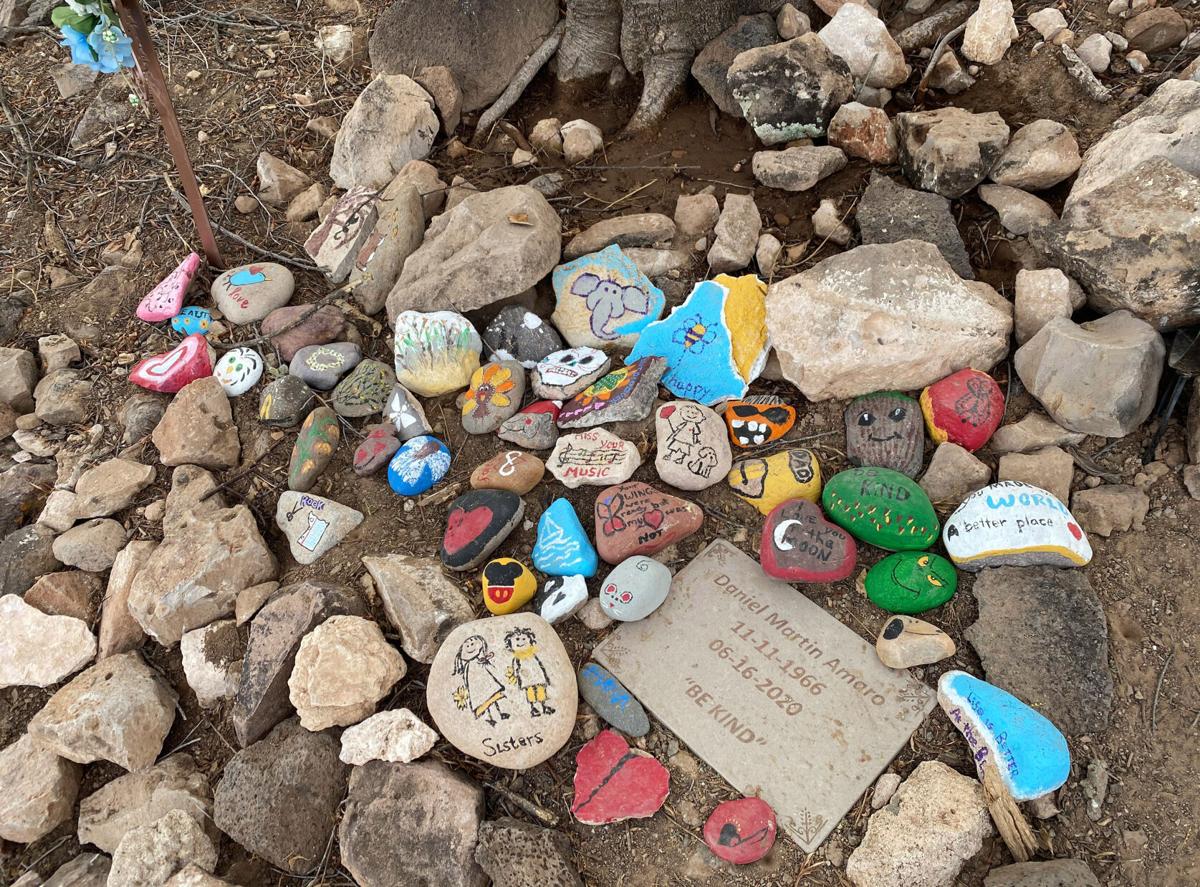 Painted rocks were part of a memorial on "A" Mountain where Patricia Amaro would visit and find solace. The memorial honored her late husband, who died from COVID-19.

Patricia Amaro found solace at "A" Mountain where she, family and friends built a memorial in honor of her late husband, Dan Amaro, a UPS employee who died of COVID-19 in June 2020.

The mountain was a favorite spot for the couple and their children who would get food from Pat's Chili Dogs and eat their dinner watching monsoon storms roll in during the summers.

So Amaro picked a spot near a walking path and palo verde tree to put a bench built by UPS workers and crosses constructed by family. She painted rocks and improved the pathway to the site off the road. A ceramic bowl filled with water was for people walking their dogs and other animals. Colorful Ben's Bells donated by Dan's UPS friends as a symbol of Dan's kindness were placed on the tree.

This is where Amaro, a nurse at a Tucson hospital, went after work and would often stay until sunset.

Then in mid-July after returning from vacation, Amaro, 56, went to the memorial, and the bench and crosses were gone.

"I was heartbroken and devastated because that had been a place of solace for me for a year," she said. The colored rocks and lights were piled up, and the Ben's Bells were taken.

She found out from a city parks and recreation worker on the mountain that only the bench and crosses were removed at the direction of Sean Nicholson, superintendent of park maintenance for Tucson Parks and Recreation. It is an unwritten policy that is enforced by Nicholson. He said there is a city code that makes it unlawful for the public to construct or erect any structure in a city park.

Other memorials have been removed from "A" Mountain, and requests for shrines and memorials in parks have been denied.

"We are trying to be respectful as much as possible," said Nicholson, explaining that removed memorials are returned to the owners when possible.

He said shrines are not allowed in parks because people come to the parks for recreation, not to visit shrines or to mourn.

Park workers have been instructed to move crosses and other items built on "A" Mountain, but it is not a high priority.

"We don't have the time to walk the whole mountain and start removing small shrines," Nicholson said. "I am sure there are things out there that we don't catch or are inconsistent with our efforts. If it comes to our attention, then they are removed," he said. City parks personnel officially were made aware of the memorial for Dan Amaro after complaints were filed with the department.

"The parks are for everybody, and I have to take that into consideration. I have to protect what the park is intended for, to visit and for recreation, and not to have to worry about trampling on someone's memorial," said Nicholson. "It makes some people uneasy, or having to explain it to a child. I have to be conscientious of that," he said, explaining that not everyone is religious and believes in roadside shrines or memorials.

"Periodically people die in our parks by suicide, accidental overdoses or murder. There was a lady whose son was murdered at one of our parks, and she wanted a memorial at the park, and I explained I cannot allow it. People justifiably would want to memorialize their loved one in such a case, and we are trying to be compassionate," he said. That is what led to memorial benches.

For three years, city parks has allowed memorial benches, which must be paid for by the family or person requesting one. The location for the benches must be approved by park officials.

"A popular place was around a pond at Fort Lowell Park. There are about a dozen benches there, and then we had to put a stop to it because there is no more room," said Nicholson. Memorial benches are located at various parks, including Reid, Udall and Purple Heart.

"We have 16 memorial benches waiting to be installed," said Nicholson, adding that the demand for the benches has grown, but department resources have shrunk.

In the near future, memorial bricks will be allowed, taking the place of benches, Nicholson said. He said plans have been submitted for the bricks to be placed at the Reid Park Rose Garden.

Amaro purchased a $1,648 memorial bench through parks and recreation for her husband that will be placed this fall at St. John's Community Park, directly north of the church at West Ajo Way and South 12th Avenue. That was Dan Amaro's parish as a boy. He was baptized there, went to the parochial school, and he married Patricia there. Their children also received their sacraments there and went to school there.

The original bench made by UPS staff for Amaro's memorial is now in the family's backyard under a mesquite tree.

Amaro said she is saddened by the complaints the parks and recreation department received about the memorial on "A" Mountain honoring her husband.

"We trimmed trees and cleaned up the area where the memorial was on the mountain. We improved walking paths and kept up the maintenance," Amaro said.

"I don't have an issue with the city. I have an issue with how a few people who feel uncomfortable can change the way we mourn in Tucson. We are not a cookie-cutter place. Memorials, roadside shrines, ghost bicycles and Ben's Bells are a Tucson thing. This is what makes Tucson. This is part of our culture," said Amaro.

For more information on memorial benches at city parks, go to https://www.tucsonaz.gov/parks/DonationsMemorials#Benches

Those interested can also call 791-4873. Specify the park wanted for the memorial bench, and you will be directed to the proper parks supervisor for information, said Sean Nicholson, superintendent of park maintenance for Tucson Parks and Recreation.

The merger is supported by both parishes leadership councils and solves one church's growth and the others declining membership.

An annual toy drive for children in need helps mother cope with the loss of her infant son.

Over 60 veterans have attended an academic boot camp at the University of Arizona.

The Barbari family has struggled and experienced a long, horrendous journey to make it here. It began 35 years ago

This memorial on “A” Mountain honored a UPS worker who died of COVID-19. His wife was “heartbroken and devastated” when the city removed the bench and crosses.

Painted rocks were part of a memorial on "A" Mountain where Patricia Amaro would visit and find solace. The memorial honored her late husband, who died from COVID-19.