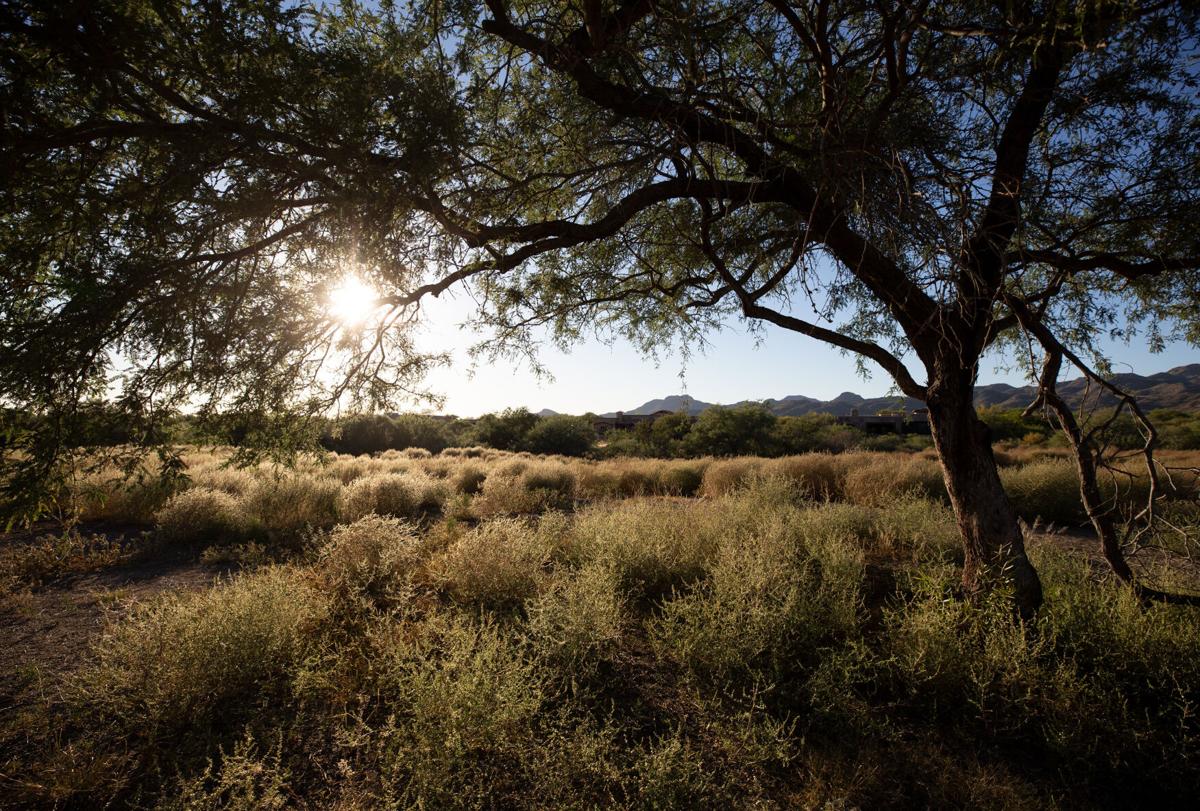 This used to be the all-grass ninth fairway on the 202-acre Golf Club at Vistoso in Oro Valley. A group hopes to purchase the former golf course and make it a nature preserve. 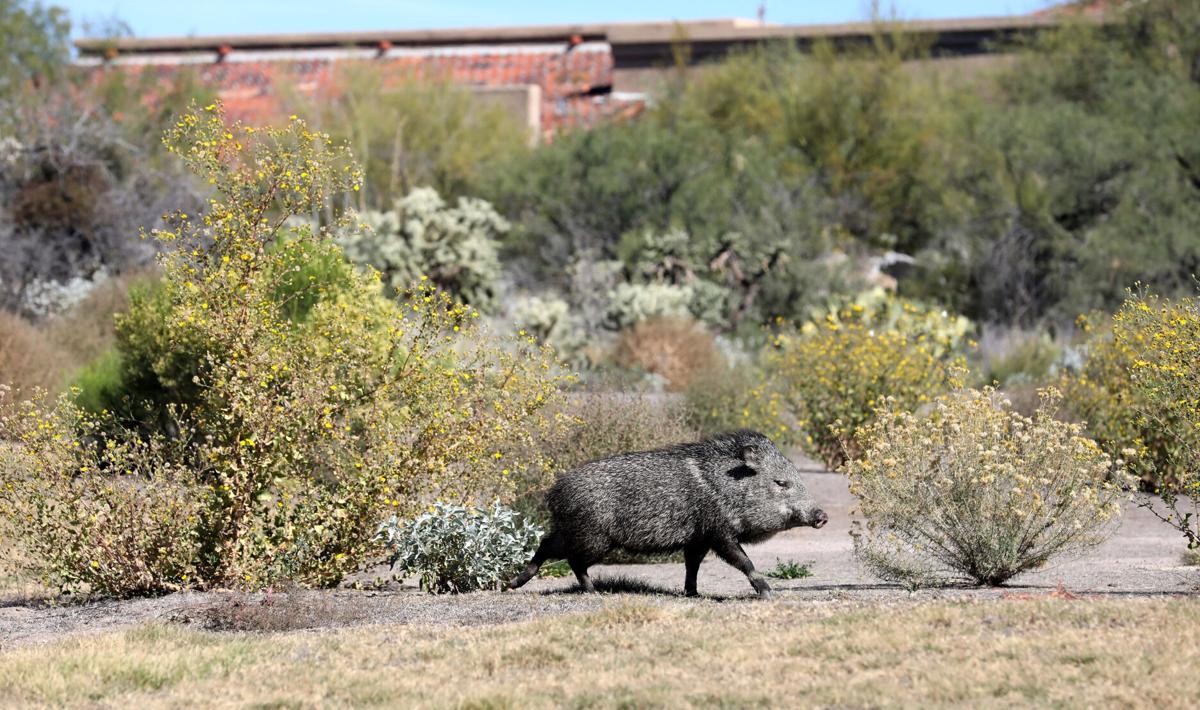 A lone javelina strolls along a fairway that has gone fallow since 2018.

After several years spent stuck in the rough, an abandoned Oro Valley golf course could soon find new life as a nature preserve.

First, though, a group of community conservationists must raise $1.8 million in two months to buy the former Golf Club at Vistoso.

“It’s heavy lifting, but we’re focused on that like a laser beam,” said Craig MacKay, one of the founding members of Preserve Vistoso.

The neighborhood nonprofit has partnered with a national organization called The Conservation Fund to purchase the property and turn it into a desert park and community trail.

The Tom Weiskopf-designed golf course opened in 1995, but rising water prices and a decline in play doomed the operation. The 18-hole desert course closed for good in 2018, three years after Canada-based investment firm Romspen bought it out of bankruptcy.

Residents along the links launched Preserve Vistoso in early 2019 in hopes of saving the golf course or at least having a say in what happened to it next.

“What was really scary was the uncertainty,” said MacKay, who moved into his home on the second fairway not long before the course shut down.

The group’s efforts took on new urgency in March 2020, when Romspen floated plans to rezone the property and sell it off to a residential or nursing-home developer.

“We don’t need any more of the desert gone,” said Patricia Sturmon, communications chair for Preserve Vistoso. “The first choice would have been keeping it as a golf course, but that just wasn’t feasible.”

Out of the sand

Mike Ford is Nevada and Southwest director for The Conservation Fund, which has completed 26 land acquisitions in Arizona since 1999, including a roughly 1,600-acre addition to Saguaro National Park and a 30,000-acre expansion of Petrified Forest National Park.

He said his organization has purchased old golf courses in the past, but it’s not a big part of what they do. He was skeptical when Preserve Vistoso first contacted him about their idea. 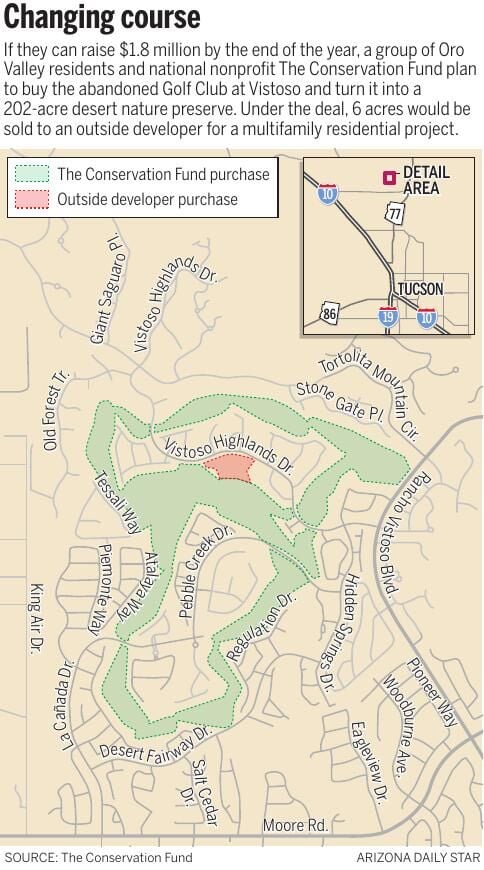 “I was concerned it was going to be a handful of NIMBY landowners,” trying to keep more houses from being built around them, Ford said. “It turned out to be way more than that.”

The golf course property features impressive views of the Catalina Mountains, “phenomenal native vegetation” and surprising archaeological resources, including petroglyphs that are visible from at least one fairway, Ford said. “The day I was there, there were deer running around the course.”

Preserve Vistoso, meanwhile, proved to be an active and engaged bunch, with a membership list that recently topped 2,000 people.

Ford said Oro Valley officials were also eager to help with the transaction, especially after so many residents rallied in opposition to Romspen’s rezoning proposal.

An initial round of negotiations ended in failure in 2020, when the two sides could not agree on a purchase price for the 208-acre site. By then, Preserve Vistoso had already collected $1.5 million in pledges and donations for the effort.

“We were despondent when it failed the first time,” Sturmon said.

The second round of talks, spurred on by town leaders earlier this year, resulted in an agreement that carves out 6 acres already zoned for high-density development where the golf course’s clubhouse, restaurant and parking lot now stand.

Ford said Romspen would keep that land to sell to a local builder, most likely for a townhouse or apartment development.

The Conservation Fund would buy the remaining 202 acres, then donate it to the town of Oro Valley for open space and “low-impact recreational use,” he said.

A conservation easement would be placed on the land — and held in trust by a separate entity — to “prohibit any kind of development there in perpetuity,” Ford said.

Of course, all of this is contingent on money.

Preserve Vistoso officially launched its second fundraising campaign Oct. 12 and collected more than $250,000 in the first week. The group has set a Dec. 15 deadline to raise the rest of the $1.8 million.

Ford is hoping many of the people who pledged the last time around will chip in even more this time, now that there’s an agreement in place with the property owner.

According to Preserve Vistoso, the golf course winds through 17 residential developments, with an estimated 6,000 people living within walking distance of the property.

It won’t take much to open the site to the public. The proposed preserve already features 6 miles of wide, fully accessible concrete trails, with underpasses beneath major roads in the neighborhood.

There are also three restrooms already in place that could be reopened without too much effort, MacKay said. “There’s literally millions of dollars of infrastructure on this course.”

Small shade structures and picnic tables could be added later, but the proposed easement would bar any high-traffic recreation amenities such as ball fields or an outdoor events venue.

“There are people who would rather have houses built behind them than an amphitheater,” MacKay said.

“It’s natural for people to worry about a thing like that, but it’s not going to happen,” Sturmon added.

Tough up and down

There are some key details that still need to be worked out, including where people would go to park and gain access to the cart-paths-turned-walking-trails now that the golf course’s main lot is destined for private development.

Some of the landscape would need work as well.

The course’s neatly manicured playing surfaces are long dead, revealing patches of dried mulch choked with brush. A picturesque pond that once served as the backdrop for weddings is now a dry hole collecting tumbleweeds.

“In the areas where there were greens and fairways, it’s not real pretty,” MacKay said.

Luckily, the natural desert was an integral part of the golf course’s design, he said, so “about 70% of it was never touched.”

For the rest, there are a number of state and federal grant programs available that could be used to replace the former fairways, greens and practice areas with native plants.

Otherwise, visitors to the preserve will just have to wait for nature to take its course.

“The desert is going to win eventually,” MacKay said.

To make a donation or learn more about Preserve Vistoso’s effort to establish a nature park at the Golf Club at Vistoso, go to the group’s website: www.preservevistoso.org.

To make a donation or learn more about Preserve Vistoso's effort to establish a nature park at the Golf Club at Vistoso, go to the group's website: www.preservevistoso.org.

Researchers finally figured out why cannabis smells like skunk

This incredibly small reptile species was just discovered in Madagascar

This incredibly small reptile species was just discovered in Madagascar

The leaves along E. Mount Lemmon Hwy, trails in the Santa Catalina Mountains and Summerhaven have started to change their colors during the fa…

The company that owns the Rancho Vistoso golf course in Oro Valley has opted to pull plans to develop the space at least until next year amid pushback from residents who want the area to be preserved as open space.

The case is the third filed by the attorney general's office involving a felon who was able to cast a ballot in Pima County last year. Two of the men were registered as Democrats and one as a Republican.

For Star subscribers: In just five weeks, a neighborhood group in Oro Valley raised the $1.8 million it needs to turn the abandoned Golf Club at Vistoso into a nature preserve.

This used to be the all-grass ninth fairway on the 202-acre Golf Club at Vistoso in Oro Valley. A group hopes to purchase the former golf course and make it a nature preserve. 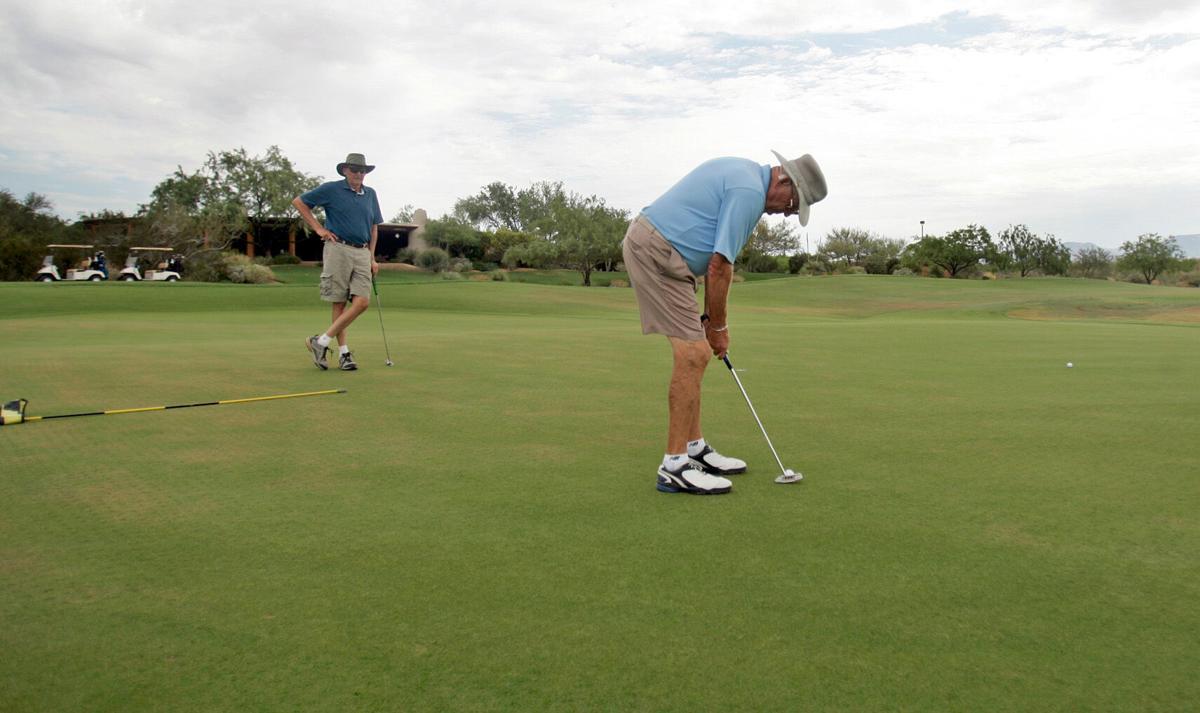 The Golf Club at Vistoso in 2010. Today, the greens and fairways are "not real pretty," says one member of Preserve Vistoso. 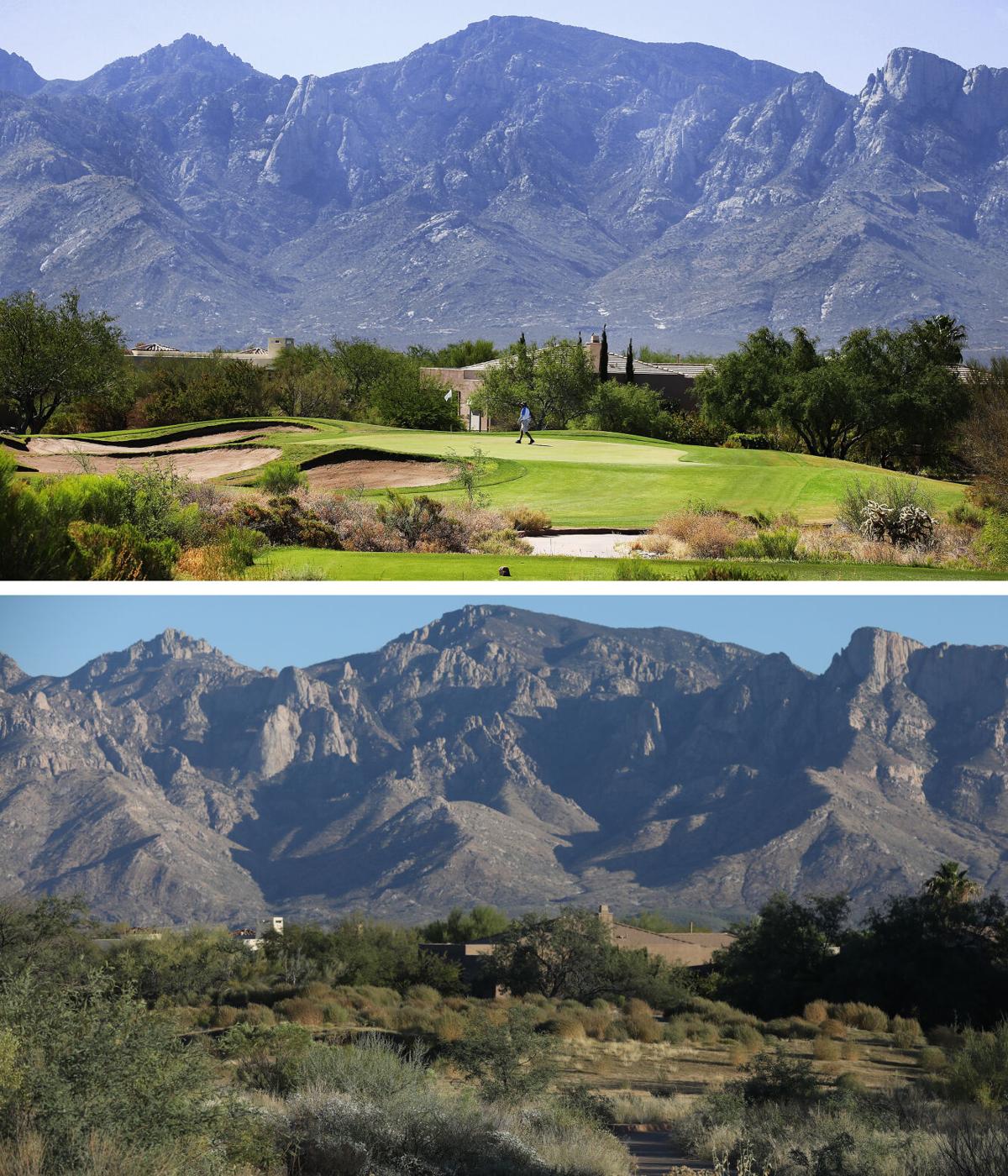 Then: A golfer retrieves his ball from the cup on the third hole at the Golf Club at Vistoso in May 2018, shortly before the course was closed. Now: By October 2021, there is little evidence that the third hole existed.

A lone javelina strolls along a fairway that has gone fallow since 2018. 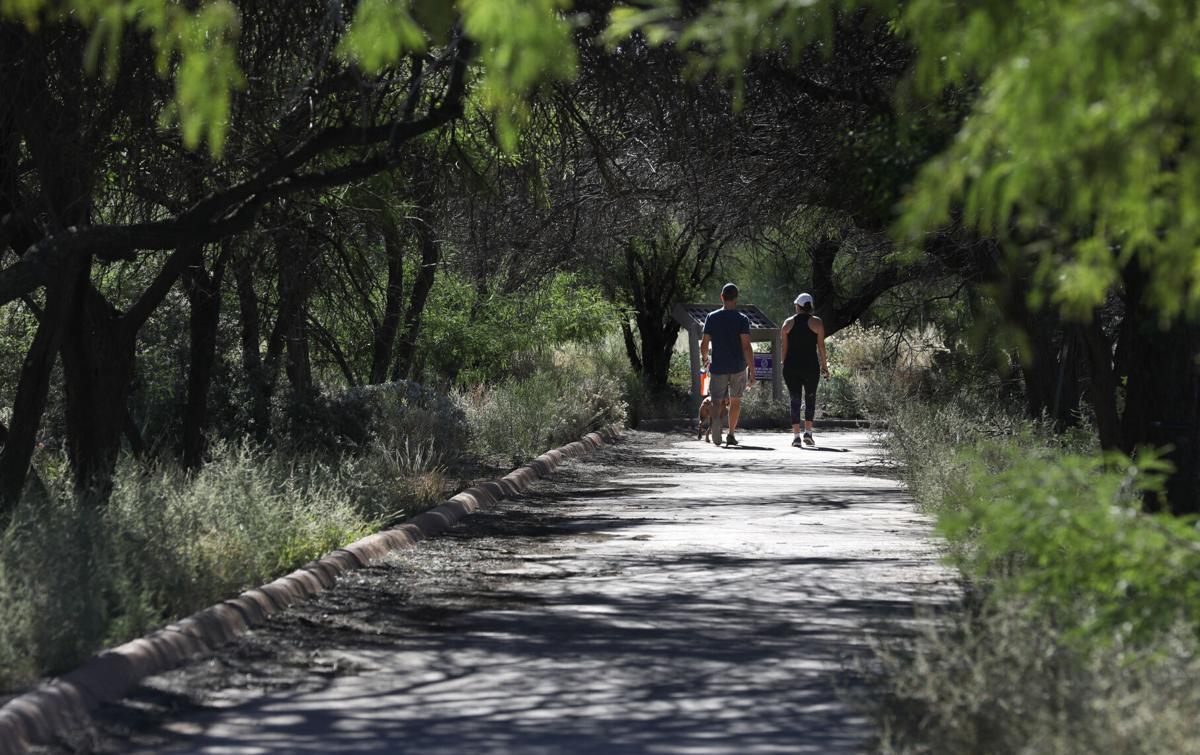