In order to be married at the Justice Court, couples must submit “$80 in cash, exact amount,” the court’s instructions said.

Huckelberry said his concern centered on the questionable nature of county employees accepting “cash in envelopes” to arrange the ceremonies. That triggered a five-month-long audit into the Justice Court’s handling of civil marriage ceremonies that found numerous violations of judicial policies.

Justices of the peace are allowed to accept money for performing wedding ceremonies under the Arizona Code of Judicial Conduct, but not during court hours.

The county’s Finance and Risk Management Department found while the ceremonies were conducted after hours, the various steps to collect those $80 payments and schedule ceremonies were performed by county employees during court hours — on public taxpayers’ dime.

This prompted the finance department to document a slew of violations in the Justice Court’s handling of marriage ceremonies, hinging on the fact judicial administrative assistants carry out marriage-related tasks during court hours. Conducting wedding ceremonies allows justices of the peace to earn nearly $13,000 annually in supplemental income, according to the department’s report.

“It’s very problematic, to say the least,” Huckelberry said. “The implication is that they were fostering a private business or enterprise of the justices of the peace, and that’s not how the system works.”

The county administrator will ask the Board of Supervisors at its meeting Tuesday, Aug. 10, to change the current ordinance for civil marriage ceremonies so that the ceremony fee goes back into the court to offset administrative costs instead of into the pockets of justices of the peace.

Public use of resources

Justices of the peace earn $104,568 in yearly salaries funded by taxpayer dollars, according to the Justice Court. Getting married at the Justice Court costs $80, a fee that’s split evenly — $10 each — among the eight judges regardless of who performed the ceremony.

The report found the court discards records of marriage fees after each calendar year, and the finance department was only able to review records for the first 15 weeks of 2021.

During that time, the records showed justices of the peace performed 374 ceremonies and collected $29,965 in fees, including one ceremony performed for $125 for unknown reasons. Annualizing the figures results in $103,760 in fees collected and $12,970 distributed to each justice of the peace every year.

The Arizona Daily Star obtained the court’s wedding ceremony fee records from the first week of January through July 12 and found $55,055 was collected for 687 ceremonies. Using the same method as the finance department, this annualizes to $102,069 a year, or $12,759 per judge — funds that are earned regardless of how many ceremonies the judges officiated at.

But without backdated records, there’s no way to tell exactly how much money the Justice Court’s judges have made from weddings, or for how long the practice has occurred.

“When it’s public money, it has to flow through our system,” said Michelle Campagne, director of Pima County’s Finance and Risk Management Department. “If they receive the fee, the fee would go into the financial system and it would follow certain internal controls and our normal processes.”

But without those internal controls, “the risk of misappropriation or theft” increases, the report says.

Couples are asked to place the $80 ceremony fee in an envelope noting their names, the date of their wedding and email address and drop it off in the Justice Court’s lobby.

Administrative assistants, who earn $36,504 to $54,756 a year, according to the Justice Court, are in charge of collecting the money daily during work hours. The report said the cash ends up in a locked desk drawer before being distributed to judges on a weekly basis.

Minimum accounting standards state cash received for wedding ceremonies should be stored “overnight in a locked safe or vault with restricted access.”

In Maricopa County, justices of the peace also perform wedding ceremonies after court hours. However, the judges conduct the monetary transaction themselves after performing the ceremony, according to Scott Davis, the public information officer for Maricopa County Justice Courts.

Couples walk up to a service window, receive a numbered sticker and wait for a judge to call their number. Davis says justices of the peace charge $60 to $115 to perform a wedding ceremony.

Because civil weddings aren’t considered a court function, there are no records filed or money-handling procedures for civil weddings, Davis said.

But because Pima County’s Justice Court conducts wedding operations during court hours, the lines between using public and non-public resources are blurred.

The finance department’s report says the court “was not aware that using (the court’s) staff time and equipment during court hours to perform duties in support of the JPs’ extrajudicial activity resulted in the use of public resources to conduct extrajudicial activities.”

The department left the Justice Court with several recommendations to bring its operations up to code, and Campagne says staffers will likely conduct a follow-up audit in six months.

“Pima County’s Consolidated Justice Court is committed to serving our community ethically and with efficiency and transparency. Wedding ceremonies are one of the many services a justice of the peace is privileged to provide. The Justice Court justices take this responsibility seriously and work hard to provide a joyous occasion.

Huckelberry is asking the Board of Supervisors to have the Justice Court implement a new process for wedding ceremonies that would deposit the $80 fees back into the court to reimburse administrative costs, including scheduling ceremonies and handling funds.

“It’s simply a public cost being reimbursed with a public fee, and the JPs would still collect their normal salary, but they would not get any portion of the marriage fee,” Huckelberry said.

While no justice of the peace responded to the Arizona Daily Star’s request for comment, an email provided by the county suggests at least one judge disagrees with the proposed ordinance.

“I would like to meet with you to discuss tabling this potential agenda item to express our concerns about the separation of powers between the Executive and Judicial Branch as well as numerous flaws, legal assertions and violations of county policy contained in the memorandum.

“We believe the best avenue regarding this subject is for all the parties to meet and discuss the memorandum and audit to avoid a potentially long legal battle in the courts and the unnecessary financial burden it will place on the taxpayers of Pima County,” Roberts wrote.

Huckelberry says Roberts’ assertion is “off-base,” that the county “absolutely” has authority to impose changes within the Justice Court and he’s not aware of any county officials meeting with Roberts or other judges.

If passed, the ordinance would give the Justice Court time to adjust its practices, which Huckelberry said the county can help with. Ultimately, he doesn’t blame the justices of the peace, but that it was an ongoing “problematic” practice.

“We’re happy to assist them in setting anything up. I think we’d just like to see it get back to a typical, normal business practice that relates to the functions of public service of the justice courts,” Huckelberry said. “I can’t fault existing justices of the peace. They were just doing what had been done probably for years in the Justice Court.”

County Administrator Chuck Huckelberry is asking the Board of Supervisors to require all employees to get vaccinated or lose their jobs.

For Star subscribers: Some local experts predict more families will become homeless. Others are optimistic that money being handed out to help pay rent, utilities and legal bills will prevent a crisis.

The 60-day moratorium on evictions applies to counties, like Pima County, that have substantial or high transmission of COVID-19.

Former sheriff set to begin a new role in county administration in August and will earn $152,000 annually.

The action aims to mitigate the spread of COVID-19 by allocating money from the American Rescue Plan Act. 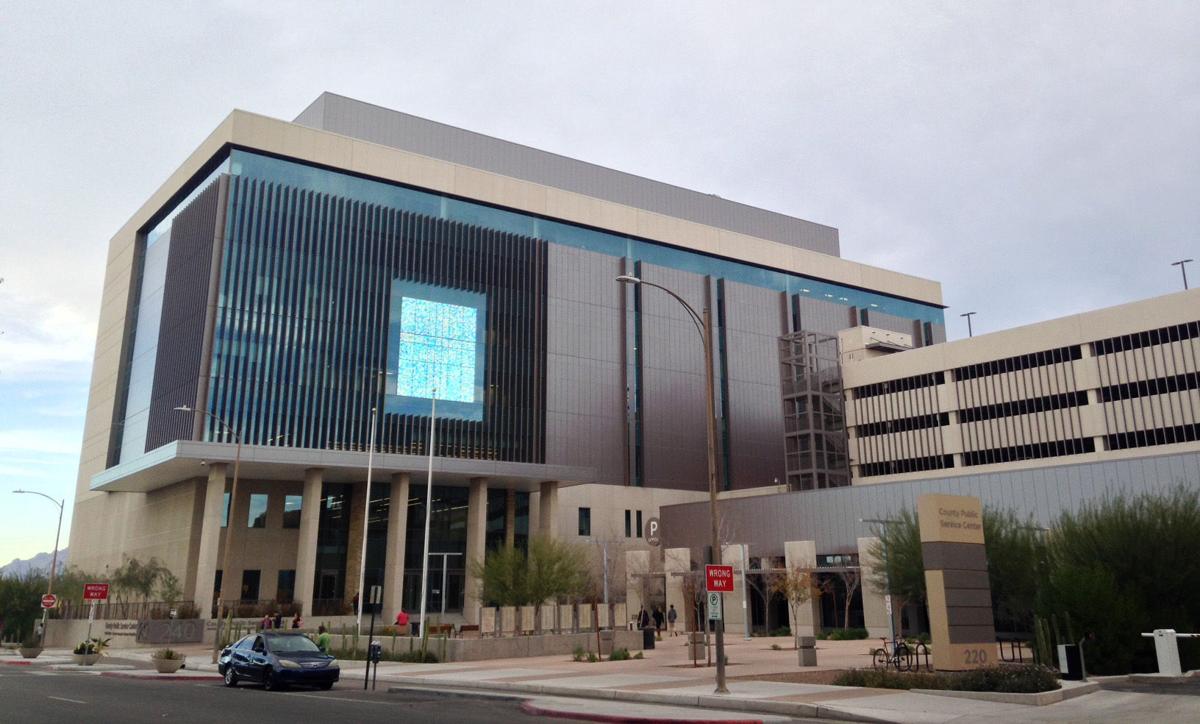 Couples looking to get married by a justice of the peace are asked to place an $80 fee in an envelope noting their names and the date of their wedding, and drop it off in the Justice Court’s lobby downtown. 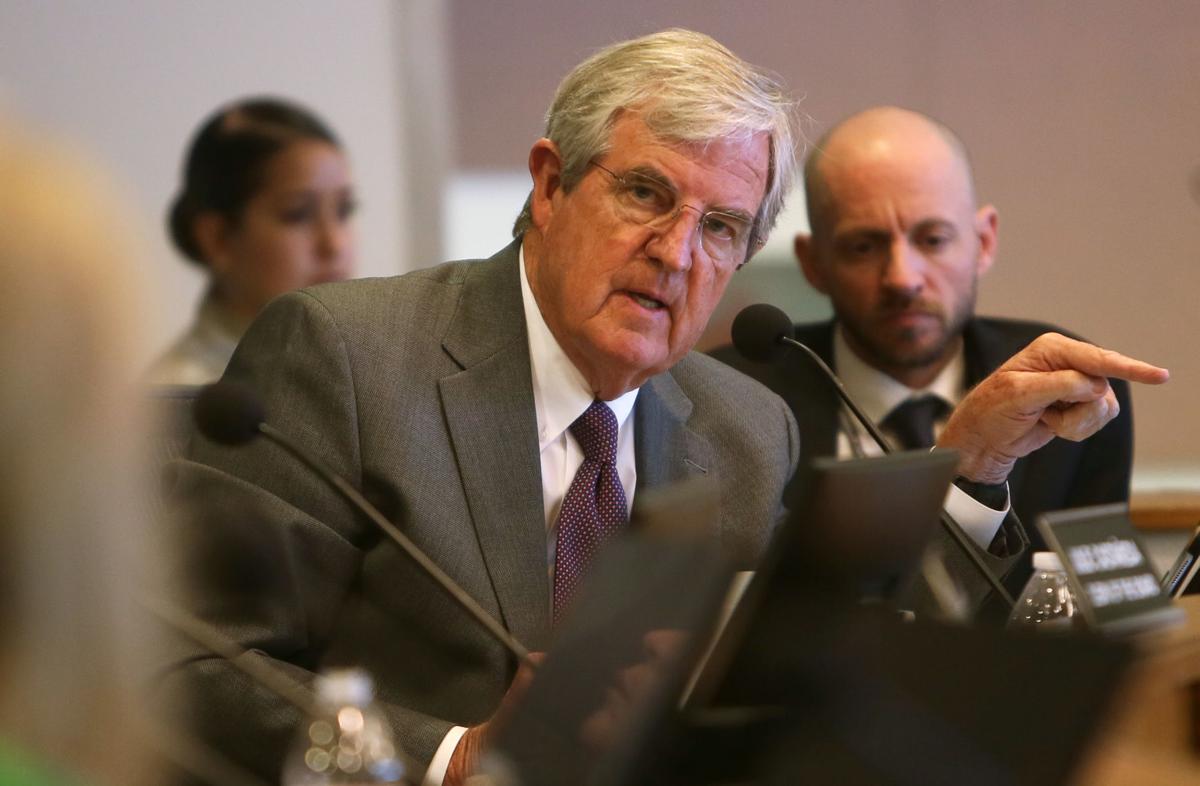 A probe by Pima County’s Finance and Risk Management Department found a slew of violations in the Justice Court's handling of marriage ceremonies, but, says Pima County Administrator Chuck Huckelberry, above, “I can't fault existing justices of the peace. They were just doing what had been done probably for years.”