There’s no way to sugarcoat this: Climate researcher Mike Crimmins is getting creamed in his own monsoon forecasting contest.

Instead, the official National Weather Service gauge at Tucson International Airport had collected just over 7 inches of rain through Tuesday night — more than enough to rank as the wettest July on record with four full days to spare.

Obviously, even the experts were caught off guard.

“My wife guessed 3 inches (for July), and I mocked her for it. I told her, ‘Do you have any idea how rare that is?’” Crimmins said with a laugh.

No other monsoon season on record has started with this much rain.

“It’s been fantastic,” Crimmins said. “It’s exceeded all of my wildest expectations.”

Less than half an inch of rain fell at the airport through all of July 2020. For the year, Tucson received just 4.17 inches of rain, its lowest total since record keeping began in 1895.

Crimmins said this season started normally enough, with daily rounds of isolated, afternoon thunderstorms that built over the mountains. But what we saw late last week was something else: a large, upper-level low pressure system that produced widespread, heavy rain over several days.

All that rain has also helped cool things down. The average temperature for the month so far is 86.1, roughly two degrees below normal.

By comparison, July of 2020 ranked as Tucson’s hottest month on record, with an average temperature of 91.5.

As welcome as they are, the storms are causing the usual damage across the community, with strong winds that have uprooted trees and torn off carport roofs and awnings.

Emergency crews have been called in to pluck stranded motorists from flooded vehicles and escort hikers out of canyons cut off by rising creeks.

The heavy precipitation has filled Tucson’s dry washes and rivers to the brim and beyond, especially those downstream from the burn scar left behind by last year’s Bighorn Fire in the Catalinas.

Over the weekend, people with cameras and cellphones lined up on bridges and along the Chuck Huckelberry Loop to marvel at the raging runoff.

Crimmins said he and his wife went for a bike ride along the Rillito River on Friday, skirting caution tape and pedaling through mud left behind by the mocha-colored torrent.

At one point, roughly 23,000 cubic feet of water a second was rushing down the Rillito past the La Cholla Boulevard bridge — enough to fill the swimming pool at the Tokyo Olympics in less than four seconds.

It was the second highest flow the river has seen since the channel was fortified following the devastating floods of 1983, said Joseph Cuffari, program manager for the Pima County Regional Flood Control District. Only the 2006 flood was bigger.

This time around, the water damaged some railings and closed portions of the Loop where the path dips down under bridges, Cuffari said.

Overall, though, the community’s flood conveyance network operated as designed, with no major problems reported, he said.

The recent storms hit especially close to home for one Tucson family.

Tom Butler said he was lying in bed sometime after midnight Friday morning, struggling to sleep through a violent downpour, when an explosion shook the front of his house near Sabino Canyon Road and Cloud Road.

He went out into the driving rain in his flip-flops to find his front walk strewn with chunks of masonry and a dead, “barbecued bird” with its feathers burned off.

A bolt of lightning had struck the corner of the house and lanced through a 25-foot-tall saguaro a few feet away.

0:44 Watch now: The Canada del Oro Wash has filled enough to flood over the Loop

The sudden surge destroyed some of the Butlers’ electronics and scrambled others, seemingly at random. The air conditioner and internet modem were both fried. So was the Playstation 4, though a TV plugged into the same surge protector was undamaged.

The camera and internet link also still work on their Ring doorbell, but Butler said he had to disable the bell part of it because it wouldn’t stop buzzing.

“And our alarm panel started talking, which I didn’t know it did. It was like an ‘Exorcist’ thing,” Butler said.

He and his wife spent the next morning cleaning up debris in the front yard, including the gruesome remains of a dove family that had built a nest in the saguaro.

No more than a minute after they went back inside, they heard another loud noise out front. Two of the saguaro’s 5-foot-long arms had crashed to the ground, right where the couple had just been working.

The next day, a saguaro arborist told Butler the cactus was “an immediate danger to the house,” so within 30 minutes there was an emergency landscaping crew in his yard to cut down the massive plant.

There were no obvious burn marks on the outside of the saguaro, but Butler said the inside looked like a baked potato in places.

Removing it cost him about $2,400, though he hopes to recover some of that through his homeowner’s policy — just as soon as he convinces the insurance adjuster he spoke to in Oklahoma that cactuses really do grow that big.

“It was my favorite plant in my yard, and now I’ve got this stump here,” Butler said. “It’s just so sad.”

Monsoon season officially runs from June 15 through Sept. 30, but Crimmins said our summer rainfall typically peaks around Aug. 1, then starts to taper off.

“Anything we get in September is a bonus,” he said.

What’s happened this month fits with some climate-change models that predict higher levels of atmospheric moisture and more extreme weather events. But Crimmins isn’t ready to chalk this up to global warming just yet.

“There’s a tendency now to see meaning in everything,” he said. “Maybe 20 years from now, this might make sense.”

To be clear, Crimmins said, human-caused climate change is happening, it is serious and it needs to be addressed. It’s just difficult to pin a single “weather-scale event” on the phenomenon, he said, especially in a region where wild swings from drought to flood are a recurring theme over the past 10,000 years.

The rain so far this year has not pulled Tucson out of its ongoing dry spell, though it has lifted us from “exceptional drought” to mere “extreme drought,” according to the weather service.

That might not sound like much of an improvement, but it comes as a huge relief to desert plants and animals left struggling to survive after 2020’s driest monsoon on record.

“Things really impacted by the lack of rainfall last year are really helped by it showing up this year,” Crimmins said.

And more could be on the way. The weather service forecast calls for increasing storm chances starting Thursday, July 29, and lasting through the weekend.

“At least in the near term,” Crimmins said, “it looks like the party keeps going for a little while.”

Tucson monsoon season is wettest on record through July 25

Through Sunday, it's the wettest Tucson monsoon since our weather records began in the 1890s, National Weather Service says.

The Arizona Game and Fish Department maintains 3,000 manmade watering holes for wildlife across the state. The ongoing drought has made that job more challenging than ever.

But experts don't know if the latest crack on U.S. 191 was caused by the overpumping of groundwater, leading to subsidence, or by natural causes.

One of several firefighters trying to reach a woman whose car was overtaken in the flooded Alamo Wash early Friday needed rescuing too after he and the woman were pulled downstream.

A large dust storm, also known as a haboob, rolled across parts of Tucson Saturday in an intense monsoon storm that was captured and shared on social media.

This year has been an active one for critters around Tucson. These coyote pups were spotted late this spring on Tucson's southwest side before… 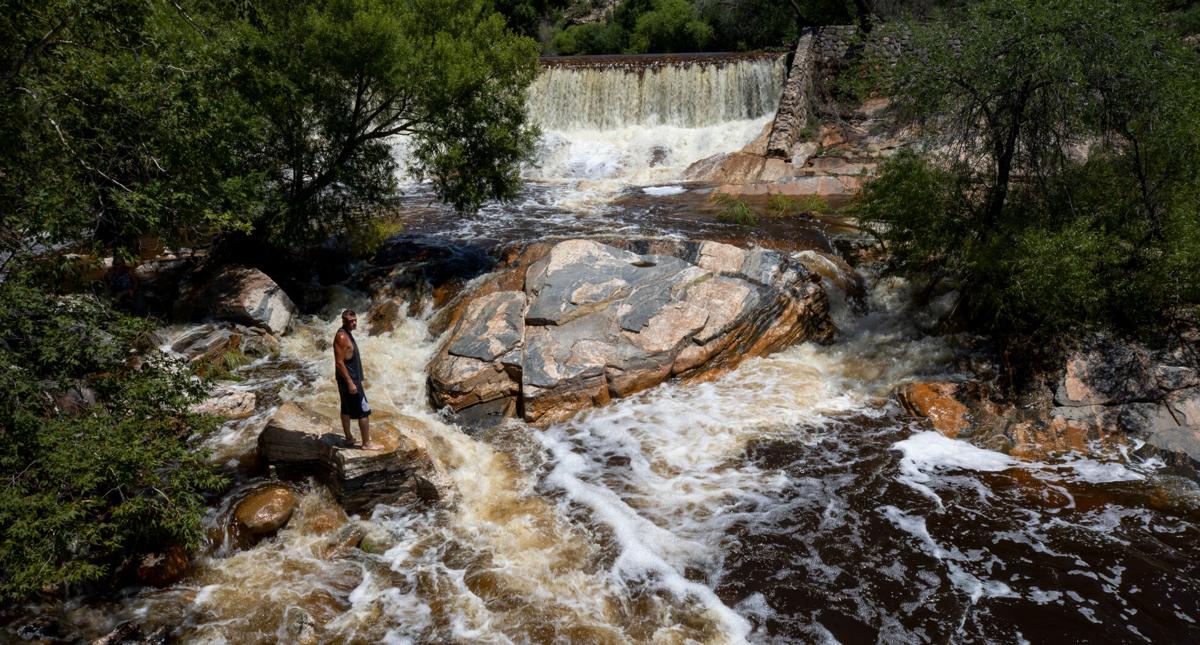 Tyler Claiborn stands on a rock while watching his daughter play in a pool at the base of the dam on Sabino Creek in the Sabino Canyon Recreational Area on Monday. Tucson has received almost twice as much rain this month as it did in all of 2020. 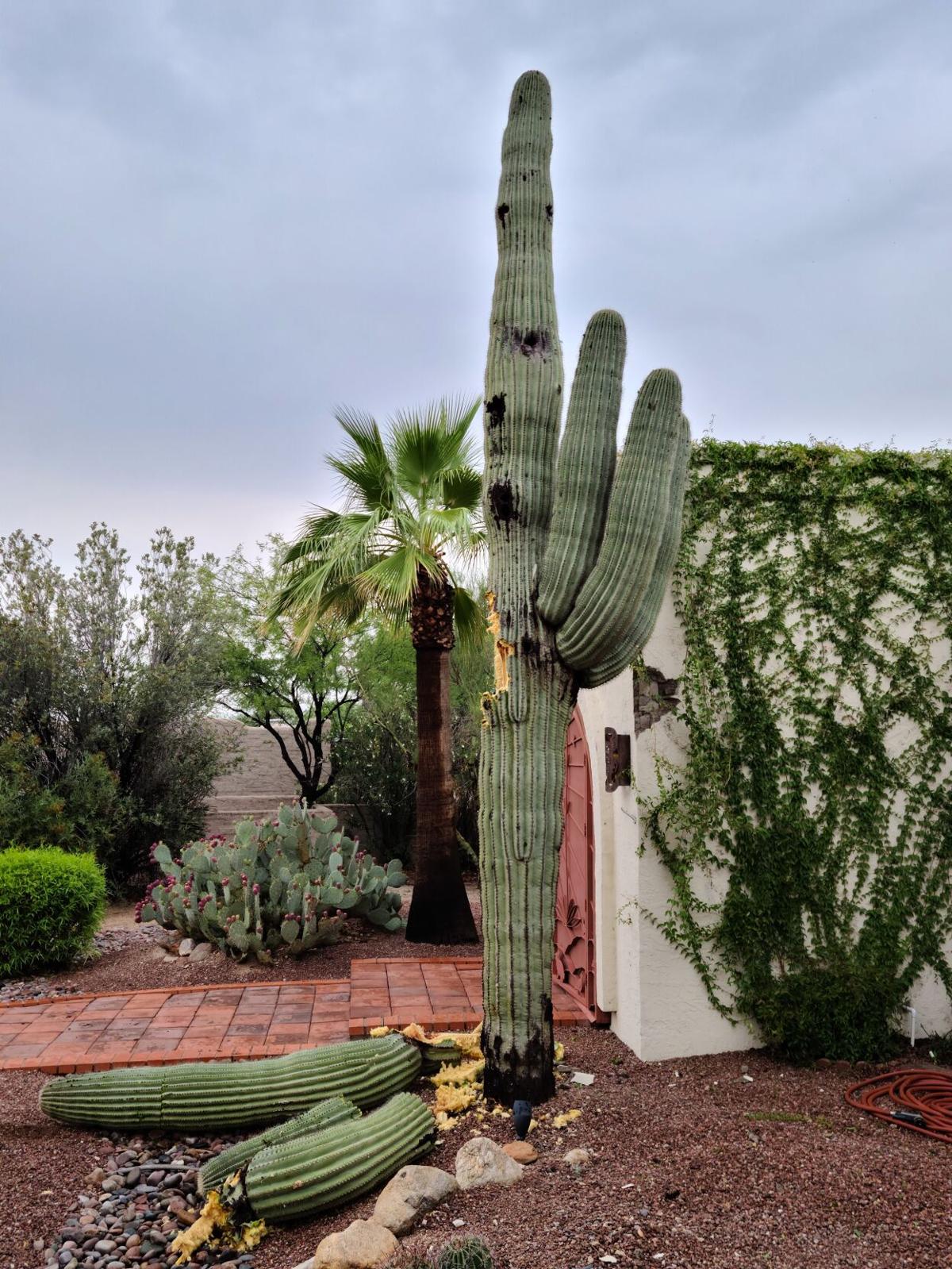 Fallen limbs lie next to a saguaro that was hit by lightning Friday at a home near Sabino Canyon and Cloud roads. Homeowner Tom Butler said the cactus's arms fell off moments after he and his wife were cleaning up debris at the base of the plant.