After more than two years of legal wrangling, hearings on a wide-ranging federal labor complaint against longtime Tucson-area copper producer Asarco LLC have finally kicked off — even as the company and its unions have returned to the bargaining table to work out a new labor contract.

The National Labor Relations Board launched hearings last week on a fifth amended complaint brought by regulators, based on charges leveled at Asarco by the United Steelworkers and six other unions representing about 1,800 workers in Arizona and Texas.

In multiple charges filed with the NLRB since 2020, the unions alleged that the company had engaged in “unfair labor practices,” including bad-faith bargaining, unilaterally changing work terms, disciplining and discharging employees for union activities and refusing to reinstate workers after a nine-month strike that ended in July 2020.

The NLRB agreed, and in June 2020 issued a formal complaint against Asarco, seeking a judgment that actions by Asarco constituted “unfair labor practices” that led to the 2019 strike.

Among other things, such a finding would entitle striking workers to get their jobs back, require Asarco to negotiate a new basic labor agreement and prompt the company to retract any changes deemed unlawfully implemented by the company.

Asarco, owned by Mexican mining giant Grupo Mexico, operates the Mission Mine in Sahuarita; the Silver Bell Mine near Marana, the Ray Mine and Hayden smelter in central Arizona; and a copper refinery in Amarillo, Texas.

Grupo Mexico has a long history of labor strife including violent strikebreaking at Mexican mines, as well as a record of environmental violations.

Asarco in filings with the NLRB has denied any wrongdoing and contends the strike was based on economic issues, which would limit strikers’ rights. The company has ignored repeated requests by the Star to comment on the case.

NLRB attorneys began arguing their case in hearings before NLRB administrative law Judge Sharon Steckler, who after hearings scheduled to last into next year will issue a ruling subject to review by the full NLRB.

At an initial, online hearing on Aug. 19, NLRB attorney Chris Doyle accused Asarco of “having no intention of bargaining in good faith” for a new collective bargaining agreement to succeed a prior labor contract extension that expired in November 2018.

Doyle also said Asarco unilaterally implemented its “last, best and final” contract offer in 2019 and acted in violation of the National Labor Relations Act before and after that move, including limiting payment of a worker bonus paid based on the price of copper.

The copper price bonus itself became a major issue when Asarco sued to overturn a ruling by a federal labor mediator that it owed hundreds of workers back bonuses because they were improperly excluded from the bonus program.

After two federal district court rulings and an appellate ruling in favor of the unions, and denial of review by the U.S. Supreme Court in 2019, Asarco paid more than $10 million in price bonuses to current and former workers.

Negotiations for a new contract started around August 2018, Doyle said in the NLRB’s opening statement.

“But respondent’s (Asarco’s) actions made it clear it had no intention of reaching a successor basic labor agreement with the unions,” he said.

For example, Doyle said, Asarco representatives showed up late for meetings, canceled agreed-upon meetings at the last minute, unreasonably delayed providing information the unions needed to bargain, and insisted on proposals it knew the unions would reject.

When Asarco declared an “impasse” in negotiations and implemented its final offer in December 2019, the company hadn’t provided the unions with the information they requested, he said.

“There was no impasse — the unions were still willing to negotiate,” Doyle said, citing a recent NLRB ruling that if either negotiating party is willing to move forward, no impasse can exist.

Away from the bargaining table, Asarco also violated federal labor law in its treatment of striking workers, Doyle said.

At the outset of the strike in October 2019, he said, the company sent letters to union members with instructions on how to resign from their unions and rescind their union dues payroll checkoffs.

After the Steelworkers and other unions ended their strike and offered to return to work unconditionally, he said, Asarco refused to reinstate some 800 strikers or displace the replacement workers they hired shortly after the strike began.

Asarco did hire back some strikers, but only if they agreed to work under the company’s final offer, and many who returned were not offered their former positions, Doyle said.

Many strikers remain on Asarco’s preferential hiring list but have not been rehired, he added.

Asarco also cut union positions at its Amarillo refinery in September 2020 to discourage union activities and shifted workers to jobs they were not trained for and assigned supervisory workers to union jobs, in violation of prior labor agreements, Doyle said.

Union members who returned to work at Asarco often were subject to “harsh discipline,” Doyle said, citing the dismissal of a haul-truck driver at the Mission Mine after a minor traffic violation, while non-union members were not fired for similar infractions.

At the Ray Mine Complex, two union members were fired after raising safety concerns about a new requirement that workers walk from a parking lot to the mill site, he added.

Asarco declined to make an opening statement at the initial hearing but will make one later as it makes its case, company attorney Richard Russo told the judge.

The first witness was Asarco’s director of human resources, Stacy Sinele, who was quizzed by NLRB attorney Nicholas Gordon about the company’s operations and various documents, including correspondence between the company and the unions at the outset of negotiations in August 2018.

About 1,270 Asarco workers are represented by unions that besides the Steelworkers include the Teamsters and unions representing operating engineers, machinists, boilermakers, pipefitters and electrical workers, Sinele said.

The number of union-represented workers is down from around 1,700 in 2018, she said.

At its Tucson-area mines, Sinele said, the Mission Mine and milling complex employs about 500 workers, down from 600 in 2018, with about 480 represented by unions.

Silver Bell was the subject of the most recent charges leveled by the unions against Asarco. In June, the Steelworkers filed NLRB charges that Asarco had illegally withdrawn recognition of the union at Silver Bell, contending it had no objective evidence the union had lost majority support.

Elsewhere, Sinele said Asarco has about 500 workers at its Ray Mine near Kearny in Pinal County, down from about 600 in 2008, and another 400 at its nearby Hayden copper smelter and concentrator operation.

Sinele, who said she joined Asarco in 2014 as a community relations manager, figures prominently in the case as an Asarco lead spokesperson in the negotiations and for her part in correspondence over document requests and communications with employees.

The unions and NLRB have charged that Sinele sent letters to Asarco employees in October 2019, soliciting the revocation of employees’ checkoff authorizations for union dues and resignation of their union membership, in violation of federal labor law.

In its answer to the NLRB complaint, Asarco said the union “was provided with copies of the letters in advance and did not object to the transmittal of the letters to employees.”

The unions and NLRB also charge that Asarco managers denied some employees requests to be represented by unions, disrupted union activities and threatened union members with staffing cuts and “unspecified reprisals” for engaging in protected union activities.

Asarco, in its filed answer, specifically denied those charges.

The NLRB hearings are scheduled to continue weekly until mid-November, restart in January and run until early March.

You can follow the National Labor Relations Board's case against Asarco by entering the main case number, 28-CA-255235, in the NLRB search page at nlrb.gov/search/case. Note that not all documents in the case are posted, and some may be sealed or redacted. You can also receive email updates on case filings by setting up an online account with the NLRB.

Meanwhile, the Steelworkers union in late July announced that it was back at the bargaining table with Asarco and the sides had already traded initial proposals and reached a tentative agreement on four issues.

“Significant changes have occurred in the industry since the unions and the company last met for (basic labor agreement) negotiations in late 2019,” the Steelworkers said at the time.

And though the NLRB testimony indicates its workforce is down from 2018, Asarco is hiring now, with 78 open positions listed on its online jobs site last week, including many traditional union trades.

ICYMI: Watch the Star's top videos from the past week

A former downtown Tucson night club successfully argued that a contractual clause prohibited its landlord from locking the owners out amid the COVID-19 shutdown.

In the past eight years, Tech Launch Arizona says its startups have raised more than $600 million in grant and equity funding.

The proposed rate hike would boost the average monthly single-family residential bill by an estimated $5.12, or about 11.6%, to $49.40, Southwest Gas says.

TuSimple, which has tested self-driving trucks from its Tucson terminal since 2015, says a non-injury crash in April was caused by human error.

Tucson has recovered nearly all of its pandemic job losses

After lagging the state's recovery, Tucson has nearly regained all the jobs lost at the height of the pandemic in 2020, University of Arizona economists say.

Ducey met with Taiwanese President Tsai Ing-wen. Taiwan is a leader in the production of semiconductors, the critical chips that are used in everyday electronics.

For Star subscribers: Tucson-based Raytheon Missiles & Defense will produce an upgraded version of a widely deployed air-combat missile for the U.S., allied countries.

Tucson, state at higher risk for recession, U of A economist says

There’s now nearly an equal chance of a recession as there is for economic growth in Tucson and Arizona, University of Arizona top economist says. 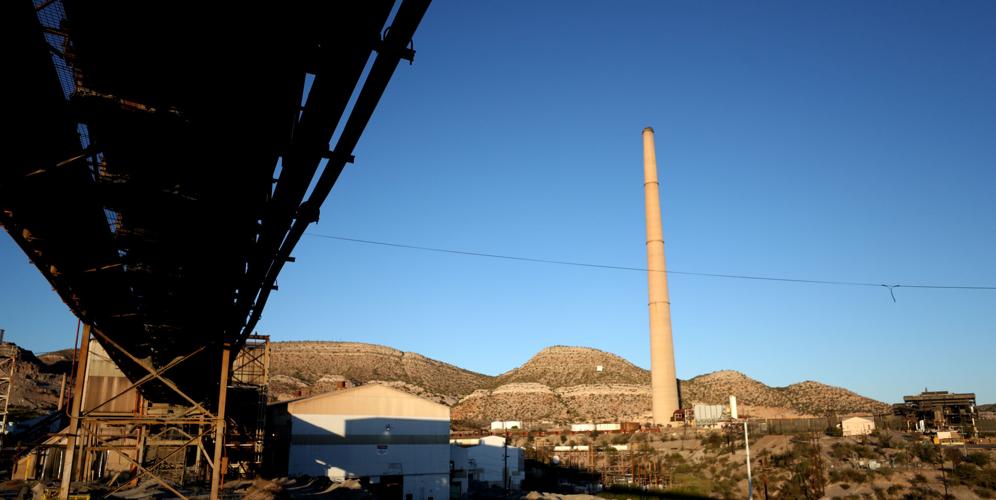 The conveyor belt leading to the Asarco smelter at Hayden. The company has about 400 workers at that site.

Silver Bell was the subject of the most recent charges leveled by the unions against Asarco. In June, the Steelworkers filed NLRB charges that Asarco had illegally withdrawn recognition of the union at Silver Bell, contending it had no objective evidence the union had lost majority support.