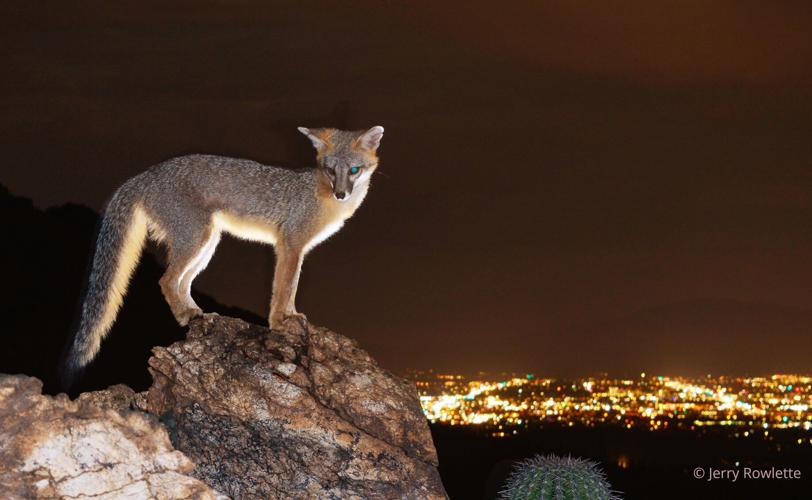 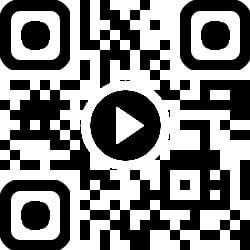 The ghostly gray figure of a large animal saunters into view and casually climbs the front steps of a home in the Tucson Mountains.

You can’t see its head at first, but there’s no mistaking what it is. The long, feline tail with the black tip gives the creature away.

This video footage of a healthy adult mountain lion was captured on a trail camera early this year — part of a small surge in such sightings that probably has more to do with the way wildlife is being watched these days than how many animals are actually out there.

Footage from the public can tell wildlife officials not only where an animal is located but whether it poses any kind of risk to people.

“With mountain lions, it’s all about behavior,” Hart said. “If it’s just passing through, that’s what mountain lions do. What we’re always looking for is menacing behavior.”

If you see a mountain lion or a bear — or catch one on your remote camera — the Arizona Game and Fish Department wants to hear about it.

The agency likes to keep track of large predators, especially near populated areas.

Spokesman Mark Hart said the agency usually only relocates or removes lions and bears that cause problems or pose a threat. Animals behaving normally and not considered a danger to the public are generally left alone, he said.

Hart said Game and Fish doesn’t use a lot of trail cameras in the field, so footage from the public provides wildlife managers with useful data they wouldn’t otherwise have.

One thing they’ve learned lately: Mountain lions are much more common than Tucson-area residents might realize.

“Early in the summer, they were turning up all over the place,” Hart said. “We had one looking at its reflection in the pool at the resort at Dove Mountain.”

A few months before that, a surveillance camera at Loews Ventana Canyon Resort captured footage of a young lion walking past a back entrance, triggering the automatic doors. Fortunately, the startled lion ran away from the building instead of inside of it.

Hart said they typically receive 80 to 100 mountain lion reports a year, but without photos or video, it’s hard to know how many of those sightings are actually lions. Increasingly, reports now come with visual proof.

Sometimes the photos or videos are sent directly to Game and Fish. Other times, the agency gets tagged when the footage is posted to social media.

Occasionally, Hart, who is also in charge of the agency’s social media accounts, will stumble across the images himself as he scrolls through Facebook or the NextDoor app.

He said he shares timely photos and videos of large predators like bears and mountain lions whenever he finds them to remind people that the animals are around but are not usually something to be concerned about.

Mountain lion attacks on humans are extremely rare, and there is no record of anyone ever being killed by one in Arizona.

Hart said trail camera use in the region seemed to tick up after the “jaguar excitement” of about 5 years ago, when a couple of the elusive cats were spotted by remote cameras in mountain ranges just north of the Arizona-Mexico border.

The camera craze “really took off in the past two years,” he said, possibly fueled by the growing number and quality of trail cameras on the market or by people looking for something to do during their pandemic lockdowns.

Doorbell cameras and other home-security surveillance systems have also gained in popularity, and those occasionally pick up wildlife activity as well.

When a young female black bear went on a four-day walkabout through Oro Valley in mid-August, doorbell cameras and other images helped wildlife officials eventually capture the animal and release her safely back into the wilderness, Hart said.

A lot of the time, though, footage of large predators, particularly on the outskirts of Tucson, doesn’t warrant any action at all.

“We live in the urban-wildland interface, so any sightings that happen are to be expected,” Hart said.

Lion at the door

So what about the mountain lion filmed climbing the front steps of a house in the Tucson Mountains?

That footage was captured in early February at Jerry Rowlette’s place in the Trail’s End neighborhood, a few canyons north of Gates Pass.

“I’m in there watching NatGeo, and there’s a lion sniffing the front door,” Rowlette said. “That an animal that size can live among us is just unbelievable to me.”

The retired manager for Raytheon first started tinkering with trail cameras about eight years ago. Now he has about 20 of them set up around his steep, 3-acre property.

Most are off-the-shelf devices, but he has also built himself three tricked-out wildlife camera traps that use DSLR cameras, infrared motion detectors and multiple flashes to capture professional-looking portraits.

At the moment, two of those camera traps are positioned around a pile of fractured boulders near his driveway, where they regularly collect gallery-quality images of gray foxes, javelinas, owls, bobcats and coyotes with the lights of Tucson behind them in the distance.

Rowlette said the animals don’t even seem to notice the camera clicking or the flashes going off.

“I don’t know whether they just think it’s one more thing in this world they don’t understand, like heat, lightning or something, but it doesn’t bother them,” he said.

Rowlette and his wife have lived at Trail’s End for about 25 years, but he said it wasn’t until he started putting up his cameras that he came to appreciate all the wildlife around them, especially after dark.

“I just couldn’t believe what was out there at night. It’s amazing,” he said.

Now he spends hours every day swapping out the memory cards on his cameras and pouring over hundreds of photos and videos collected the night before.

“I’ve got hard drives full of stuff. I mean if it’s a windy day, you think, ‘Oh no.’ You’ve got to go through all that motion-activated (footage), and there’s nothing there,” he said. “I could be doing worse things. It keeps me out of Vegas I guess.”

Over the past six years, Rowlette has caught eight mountain lions on the cameras outside his house. He’s captured footage of four of them since February alone, including a pair of lions that strolled across his front steps together in early August.

The big cats have shown up on some of his neighbors’ cameras, too.

“I don’t take the trash out at night anymore, that’s for sure,” Rowlette said with a laugh, “but really they want nothing to do with us.”

So far, he’s never actually seen a mountain lion with his own eyes.

“I don’t know where they go during the day, maybe to the higher areas to stay out of people’s way,” Rowlette said. “They’re just invisible.”

Or at least they used to be.

On Saturday, an interpretive display will be unveiled for the Waterman Restoration Site at the monument northwest of Tucson.

For Star subscribers: The National Park Service wants to reroute the road and dramatically expand the parking lot at the Rincon Mountain Visitor Center, which dates back to 1953 and contains just 40 spaces.

For Star subscribers: Wildlife officials are encouraged by the latest bighorn sheep numbers from across Southern Arizona, but what about the herd in the Catalinas? It's complicated.

The sandhill cranes have landed once again at their wintering grounds at Whitewater Draw Wildlife Area south of Willcox. 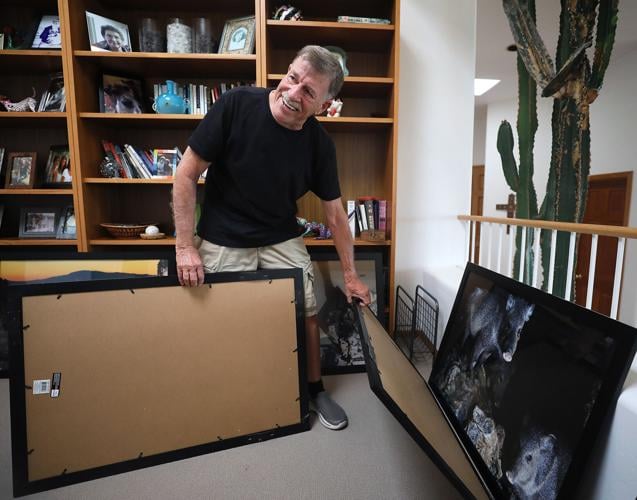 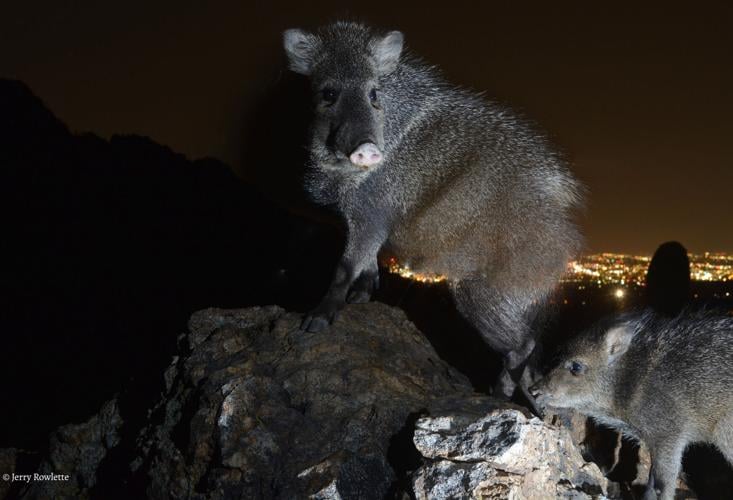 Javelina captured by a wildlife camera on Jerry Rowlette’s property west of Tucson. 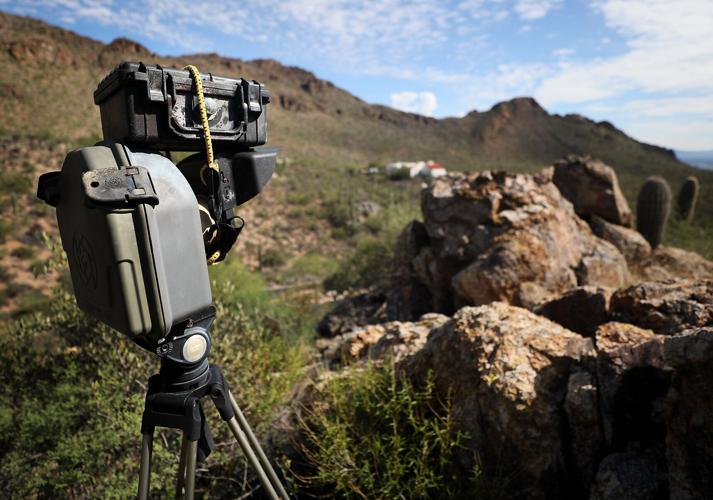 Jerry Rowlette set up a camera pointed towards an area where wildlife typically cross his property west of Tucson at night. Rowlette has 20 cameras around his 3-acre property to capture the wildlife. 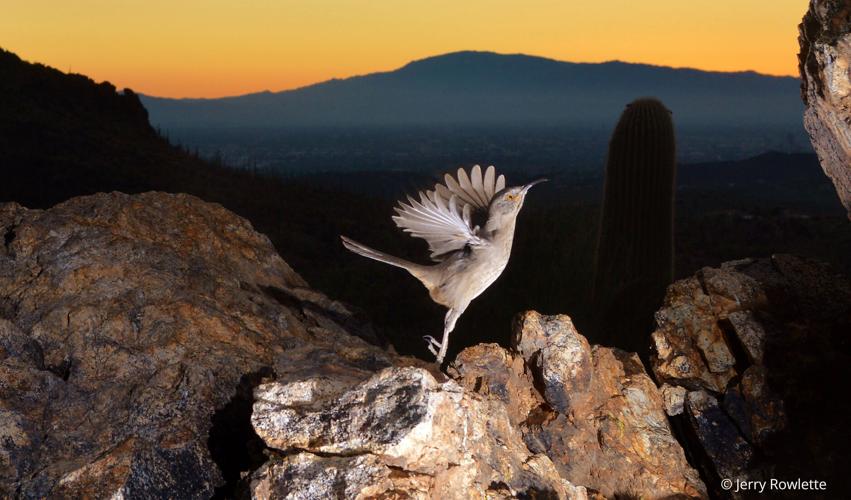 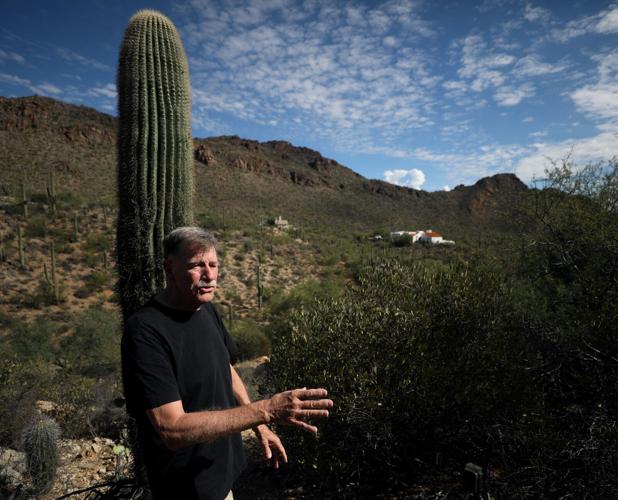