The asteroid that killed the dinosaurs may have had an accomplice.

A team of researchers, including one from the University of Arizona, have found evidence of a second large impact crater at the bottom of the Atlantic Ocean that appears to be from the same time period, roughly 66 million years ago.

University of Arizona research scientist Veronica Bray said the newly discovered crater could have been made by the “little sister asteroid to Chicxulub,” the 6-mile-wide space rock that wiped out 75% of the Earth’s plant and animal species, including all nonavian dinosaurs.

Uisdean Nicholson, a geologist at Heriot-Watt University in Edinburgh, Scotland, found the crater by accident in 2020, during unrelated seismic exploration of the Atlantic seabed about 250 miles off the coast of Guinea in West Africa.

The crater is more than 5 miles wide and buried roughly 950 feet below the seabed.

“I’ve interpreted lots of seismic data in my time but had never seen anything like this,” Nicholson said in a written statement. “It has particular features that point to an asteroid. It has a raised rim and a very prominent central uplift, which is consistent for large impact craters.”

He also found signs of a chaotic debris field extending away from the crater for more than 10 miles, suggesting material that was violently ejected by the impact and tossed around in the churning water.

Nicholson named the feature Nadir crater after a nearby underwater mountain.

He brought in Bray, fellow impact expert Sean Gulick from the University of Texas at Austin and research scientist Benedict Aduomahor from Heriot-Watt University to help analyze the discovery. Their findings were published Wednesday in the journal Science Advances.

Based on her computer simulations, Bray said the crater is consistent with an asteroid about a quarter of a mile wide crashing down in water some 2,500 feet deep.

The impact would have caused widespread devastation in its corner of the globe, vaporizing everything in the immediate area, triggering a magnitude-7 earthquake and generating a series of tsunamis hundreds of feet high, she said.

“If you were standing on the west coast of Africa, you would have seen the sea go out and the sand stretch for miles” before the first giant wave hit, Bray said.

She estimates the energy released by the strike was about 1,000 times greater than the January 2022 eruption and tsunami in the South Pacific island chain of Tonga or about 300,000 greater than the atomic blast that destroyed Hiroshima.

Nicholson has already applied for funding to drill into the seabed and confirm that what he found is an asteroid crater. Bray said that work is slated to happen in 2024 as part of another seismic investigation off the coast of Africa.

During the trip, researchers also hope to collect core samples containing rock melted by the asteroid impact, so they can use the material to determine the precise age of the crater, plus or minus about 11,000 years. “It’s the best style of dating that we have,” Bray said.

If the two impacts turn out to be separated by tens of thousands or even hundreds of thousands of years, it could point to a cluster of apocalyptic asteroid impacts that brought the Cretaceous period crashing to a halt.

But if the date of the Nadir sample matches up with the dinosaur-killing Chicxulub event, it would suggest that the smaller asteroid broke off from the larger one before they both slammed into the Earth roughly 3,400 miles apart.

“This would have helped finish off the dinosaurs,” she said, before laughing at her use of the word “helped.” “As an impact modeler, I think of what’s good for the crater,” Bray said.

Not that Chicxulub needed any help.

When that asteroid slammed into what is now the western Caribbean and the Yucatan Peninsula, it blasted a crater 110 miles wide and 12 miles deep, launching debris into space and shrouding the planet in hot dust, ash and rocks that set fire to most of the world’s forests as they rained down from the sky.

It also produced “megatsunamis” nearly a mile high and a seismic event of magnitude-10 or greater that “would have left the Earth ringing like a bell for days,” Bray said.

The discovery of the Nadir crater is significant whether it’s directly linked to Chicxulub or not, said Gulick, the impact expert from the University of Texas.

“Despite 4 billion years of impactors hitting Earth, only 200 have been discovered,” he said in a written statement. “It is thus exciting news whenever a new potential impact is discovered, especially in the hard-to-explore marine environment.”

To date, fewer than 20 marine impact craters have been confirmed across the globe.

Bray said the sediment cores due to be collected from the Nadir site in 2024 could also help shed light on how life recovered from the cataclysm and how long that might have taken.

Bray joined the U of A’s world famous Lunar and Planetary Laboratory 13 years ago, after earning her doctorate degree in the United Kingdom.

In addition to her work as an impact modeler, Bray logs time as a spacecraft operations engineer, assisting with the Cassini mission to Saturn, the New Horizons mission to Pluto and NASA’s HiRISE camera, which is operated from the U of A campus as it circles the red planet onboard Mars Reconnaissance Orbiter.

Work on the Nadir crater has been a nice change of pace.

“I’m usually out in the solar system,” Bray said. “It’s interesting to be doing terrestrial modeling.”

Collection: Read more on U of A research

New journal papers reveal how close a University of Arizona-led space mission came to sinking into the unexpectedly soft surface of the asteroid Bennu in 2020.

A team including scientists from the University of Arizona have revealed the first image of the black hole at the center of our galaxy.

University of Arizona scientist Jessica Tierney won the prestigious prize for her research on climate change in the distant past and the future.

A tiny native fish was reintroduced to the Santa Cruz River in Tucson on Wednesday, thanks to efforts to restore the river's flow using treated wastewater.

If the James Webb Space Telescope "were sitting here in Tucson, you could take a picture of a basketball in Albuquerque, New Mexico," a University of Arizona scientist said in describing its power.

By the time three-fourths of women are diagnosed with ovarian cancer, it’s in an advanced stage with a devastating prognosis.

Requiem for a saguaro named Strong-Arm

For Star subscribers: Neighbors and regulars of Tortolita Preserve in Marana are mourning the loss of a giant saguaro known as Strong-Arm, which might have sprouted around the time of Abraham Lincoln’s inauguration.

Our little corner of the Sonoran Desert gets the full David Attenborough treatment in a new BBC nature documentary set to premiere on PBS on July 27.

New journal papers reveal how close a University of Arizona-led space mission came to sinking into the unexpectedly soft surface of the asteroid Bennu in 2020.

For Star subscribers: Residents and researchers are learning a lot as they follow a GPS-collared bobcat and her kittens through a gated community on the west side of Tucson.

Starting late Friday morning through Saturday night, all of Southeastern Arizona should expect excessive rainfall coming from the south and moving north.

For Star subscribers: Everyone has their own way of keeping cool during the hot summer months in Tucson. Scientist Chad Greene studies the ice sheets of Antarctica.

Slur is removed from 66 place names in Arizona

For Star subscribers: An offensive term for Indigenous women has been stripped from the names of hundreds of geographic features nationwide.

An American pilot killed on D-Day was finally laid to rest in France, after a multi-generational effort by family members in Tucson and elsewhere.

Recent asteroid missions can be traced back to Tucson

For Star subscribers: Researchers from the University of Arizona and the Tucson-based Planetary Science Institute are playing major roles in the recent wave of asteroid exploration.

For Star subscribers: As challenges mount, research continues on ancient footprints in White Sands that could rewrite the story of humanity in North America. 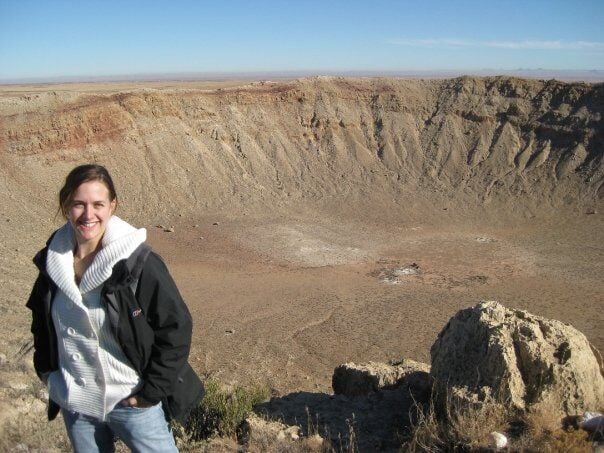 University of Arizona research scientist Veronica Bray, seen here on the rim of Meteor Crater west of Winslow, did the impact computer modeling for a newly discovered deep-sea crater that could date back to when the dinosaurs were wiped out. 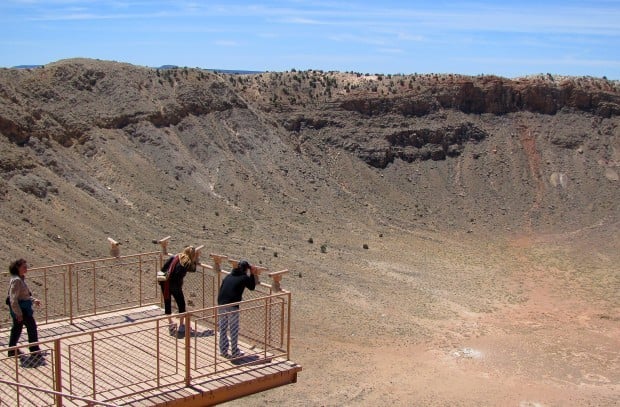 Meteor Crater near Winslow is one of fewer than 200 asteroid impact craters that have been identified across the globe. A University of Arizona researcher was involved in the recent discovery of a deep-sea crater that could date back to the extinction of the dinosaurs.