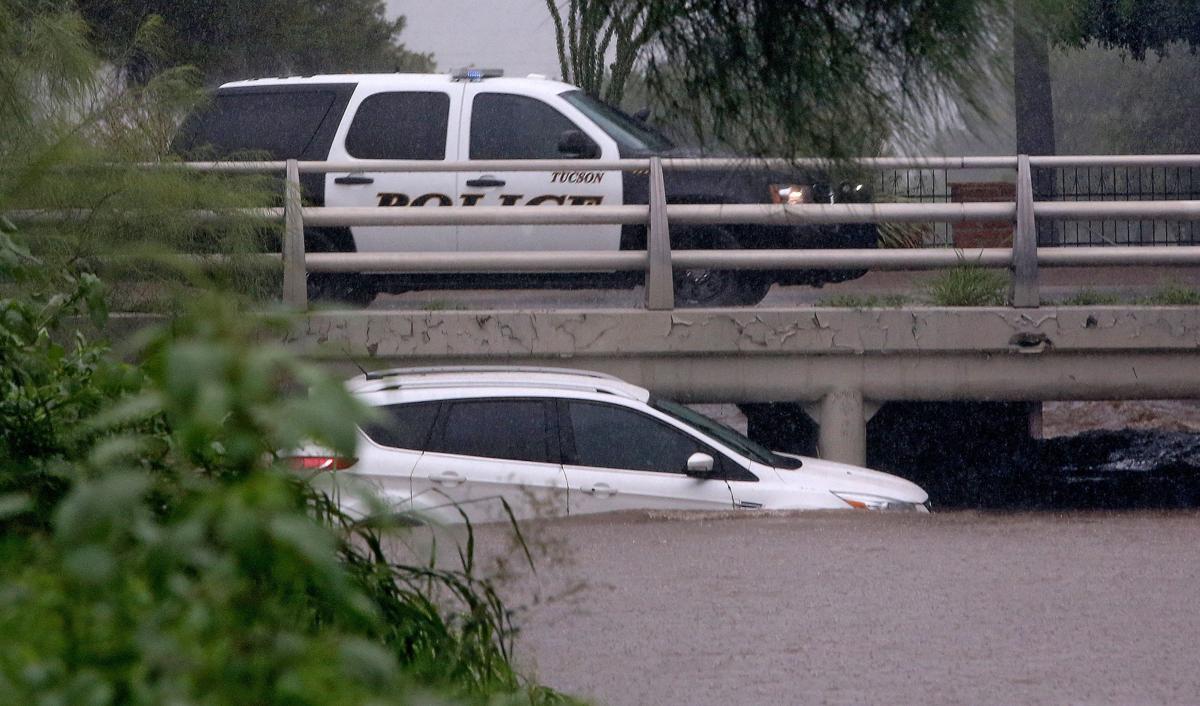 A Tucson Police Department vehicle drives by Supervisor Sharon Bronson’s partially submerged SUV that tried to cross a wash near Fort Lowell and Oracle roads. The SUV was pinned against a bridge at Oracle and rescuers had to pull Bronson out through the rear window. 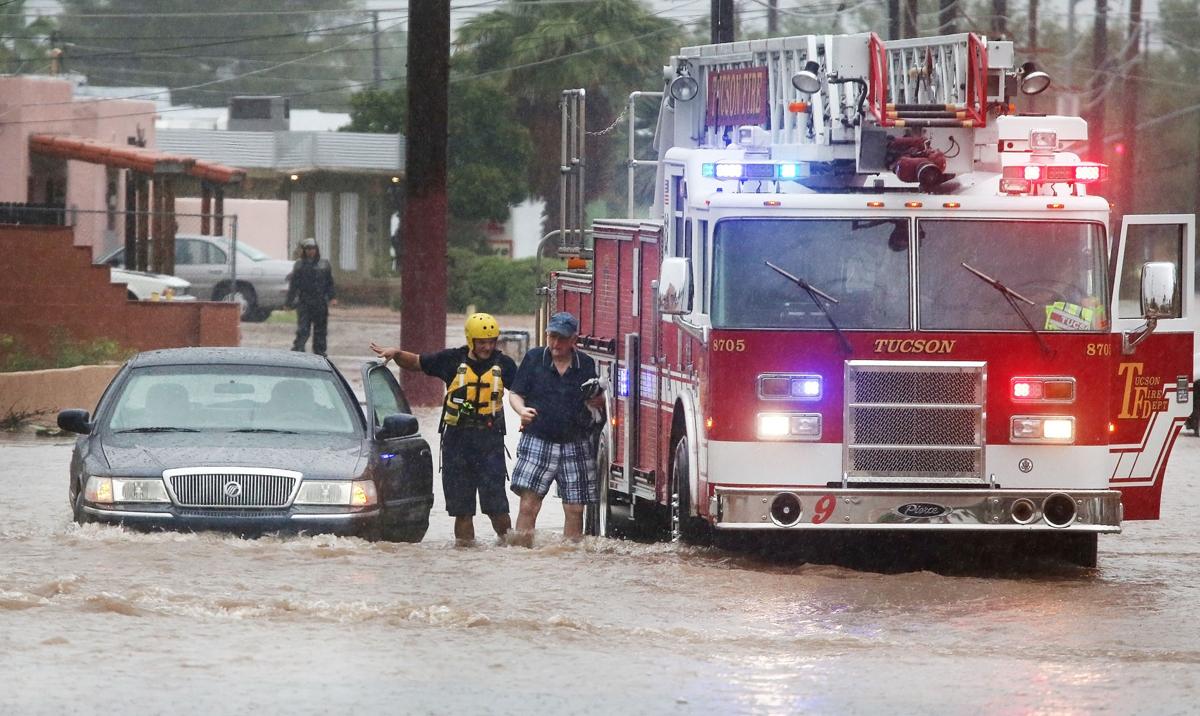 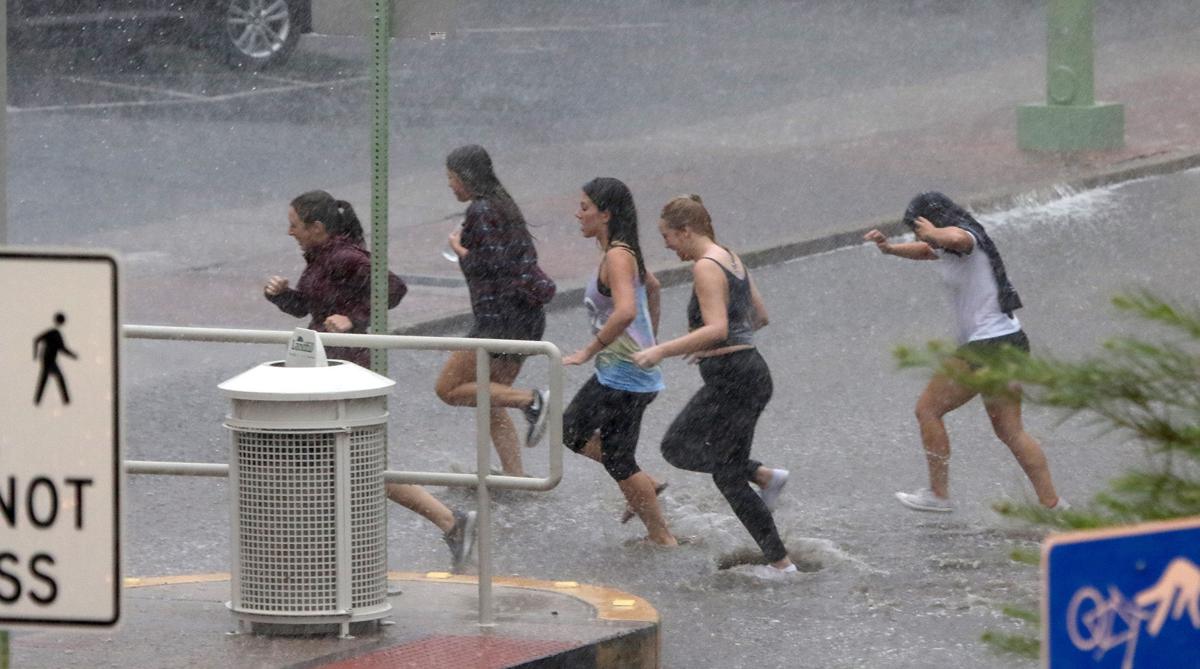 Several women get drenched as they race through the rain at the University of Arizona, which recorded 2.6 inches of rain Tuesday. 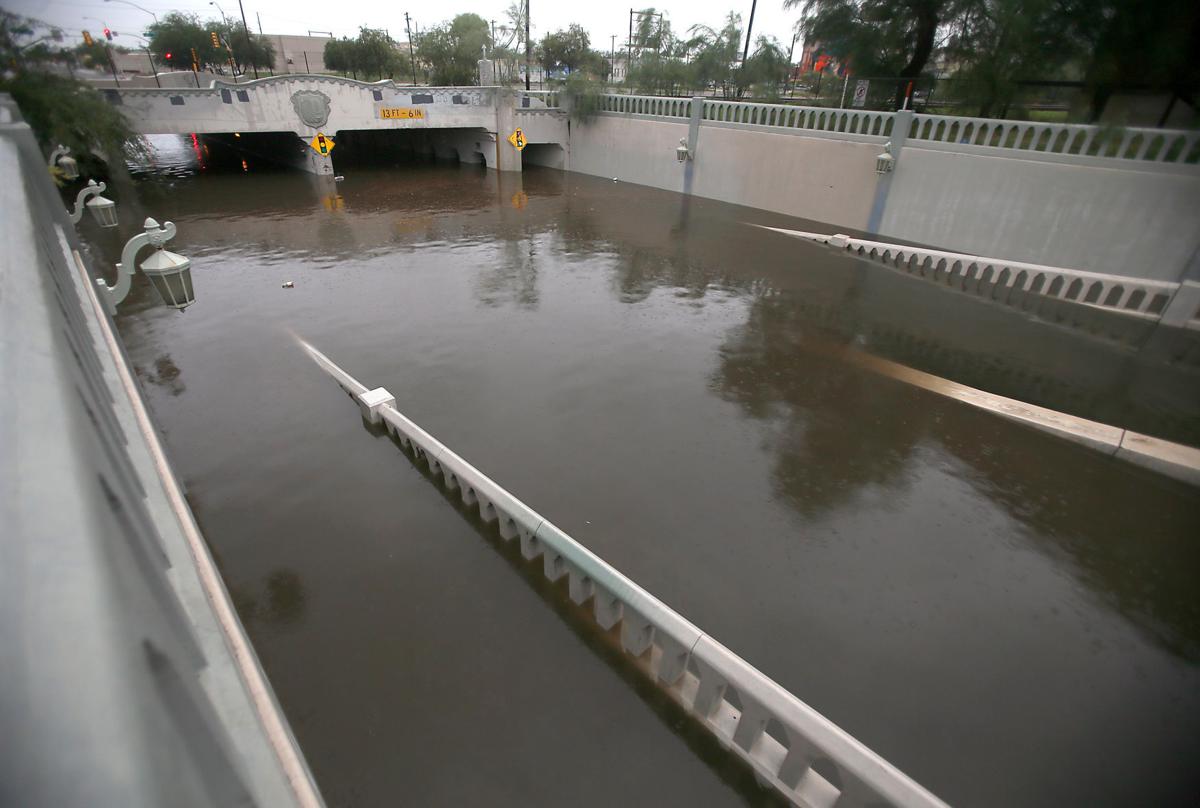 The Stone Avenue underpass regularly floods in heavy rains, but a project to begin next year could reduce the frequency. 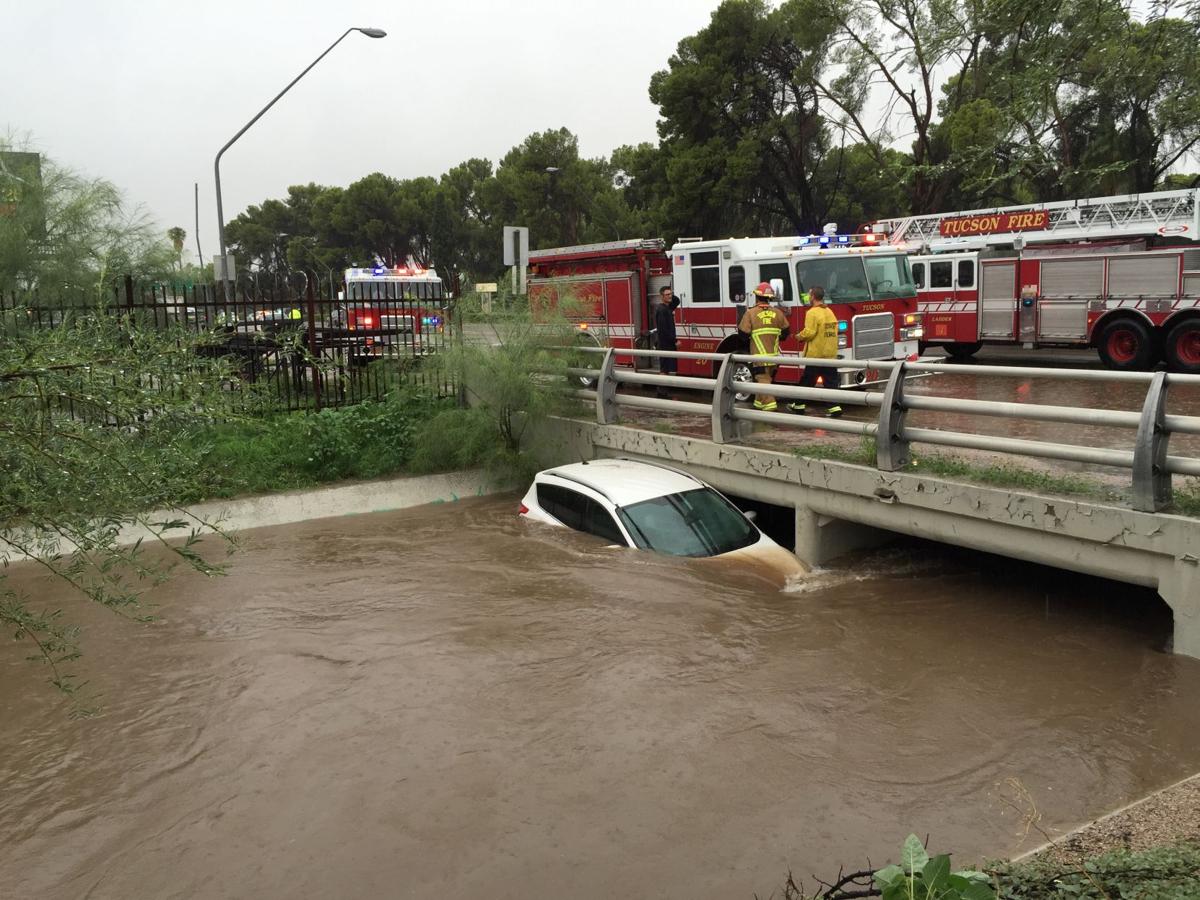 Pima County Supervisor Sharon Bronson was rescued from this vehicle in a wash at North Oracle Road.

Firefighters had to smash out the rear window of an SUV to rescue Pima County Supervisor Sharon Bronson after the vehicle she was driving was swept away in a flooded wash on Tucson’s north side Tuesday morning.

The incident at North Oracle Road near the Evergreen Cemetery was one of eight swift-water rescues handled by the Tucson Fire Department during the storm, which dumped nearly 3 inches of rain across Tucson. More rain is possible Wednesday, Aug. 10, in Tucson, which remains under a flash-flood watch.

Bronson was not injured after getting caught in storm runoff on North Balboa Avenue that carried her roughly an eighth of a mile in the Cemetery Wash toward Oracle, according to a Tucson Fire Department release.

Bronson told the Star she was bumped from behind, possibly by another vehicle, while heading east on Fort Lowell Road “and I saw an opportunity to turn into the next street, and I had no brakes.”

“I saw it coming and I couldn’t stop the vehicle,” she said of the moment her county-owned vehicle approached the wash, which she estimated had several feet of rushing water.

Pushed up against the bridge at Oracle, Bronson said she called 911 as water filled the vehicle to her waist. Tucson firefighters and police responded, according to a county release.

Capt. Barrett Baker, a Tucson Fire Department spokesman, said units were nearby responding to other flooding calls, which is why rescuers were able to respond in a “few minutes.”

“The water was up to the windshield level of the SUV as crews arrived,” an account of the incident provided by the Fire Department reads. “The driver side was pinned against the bridge and the passenger side was taking the full force of the water so crews had to break open the rear window of the vehicle and pull the occupant out of the back.”

“I’ve got heroes now,” Bronson said of her rescuers.

The Fire Department responded to 75 weather-related calls, 45 of which were for stranded vehicles. Baker said it was one of the busiest storms he could recall in recent years.

Beyond the quick response of rescue personnel, Bronson chalked up her survival to the high profile of her SUV, adding that the day might have ended differently if she had been in a compact car.

“OK, I’m actually going to make it out of here,” Bronson recalled of the moment firefighters arrived on scene. Her county vehicle, whose hood was under the water level, is likely a total loss, Bronson said.

Bronson is unlikely to be held liable for rescue expenses, as allowed for by Arizona’s so-called “stupid motorist law.” The law says a driver can be held liable if the driver attempts to cross a flooded road and that the road is “barricaded.” Bronson said there was no barricade.

Tucson Department of Transportation spokesman Michael Graham said the wash on Balboa is one where the department stashes barricades nearby for quick deployment during floods, but could not confirm if they had been put in place before the incident. Baker said the wash crossing was barricaded by the afternoon.

There are permanent signs on Balboa warning motorists to not enter the wash when it’s flooded, according to Graham and street-level images on Google Maps.

Baker said public safety is far more important than recouping rescue costs, adding that those who are involved in such incidents are the least likely to ever be involved in them again.

“You never think it will happen to you until it does,” Baker said. “But you don’t get a chance to rewind time once you’re in that situation.”

No one was injured in the other flood-related incidents Tuesday, Baker said. The last fatalities in such incidents came in September 2014, when a woman was pulled from her vehicle by floodwaters near Palo Verde High School, according to Baker.

Tuesday’s heavy rains were associated with what was Tropical Storm Javier in the Pacific. The entire region is under a flash-flood watch until late Wednesday because more rain is possible.

Check out next Monday's Road Runner column for an interview with the Volvo's driver, and more information on why underpasses like this have re…

Paper transfers to be dropped, three routes to be adjusted

Letter: Gun rights not a priority for Trump

Re: the Aug. 11 column "Media determined to misinterpret Trump's remarks."

The meeting to approve was held on Monday to meet the statutory deadline.

Statewide, the summer rain totals are normal or below, but a series of drenching storms filled rain gauges in Tucson.

Goal is to save money through car rentals, ride-shares or other transportation.

A Tucson Police Department vehicle drives by Supervisor Sharon Bronson’s partially submerged SUV that tried to cross a wash near Fort Lowell and Oracle roads. The SUV was pinned against a bridge at Oracle and rescuers had to pull Bronson out through the rear window.

Several women get drenched as they race through the rain at the University of Arizona, which recorded 2.6 inches of rain Tuesday.

The Stone Avenue underpass regularly floods in heavy rains, but a project to begin next year could reduce the frequency.

Pima County Supervisor Sharon Bronson was rescued from this vehicle in a wash at North Oracle Road.