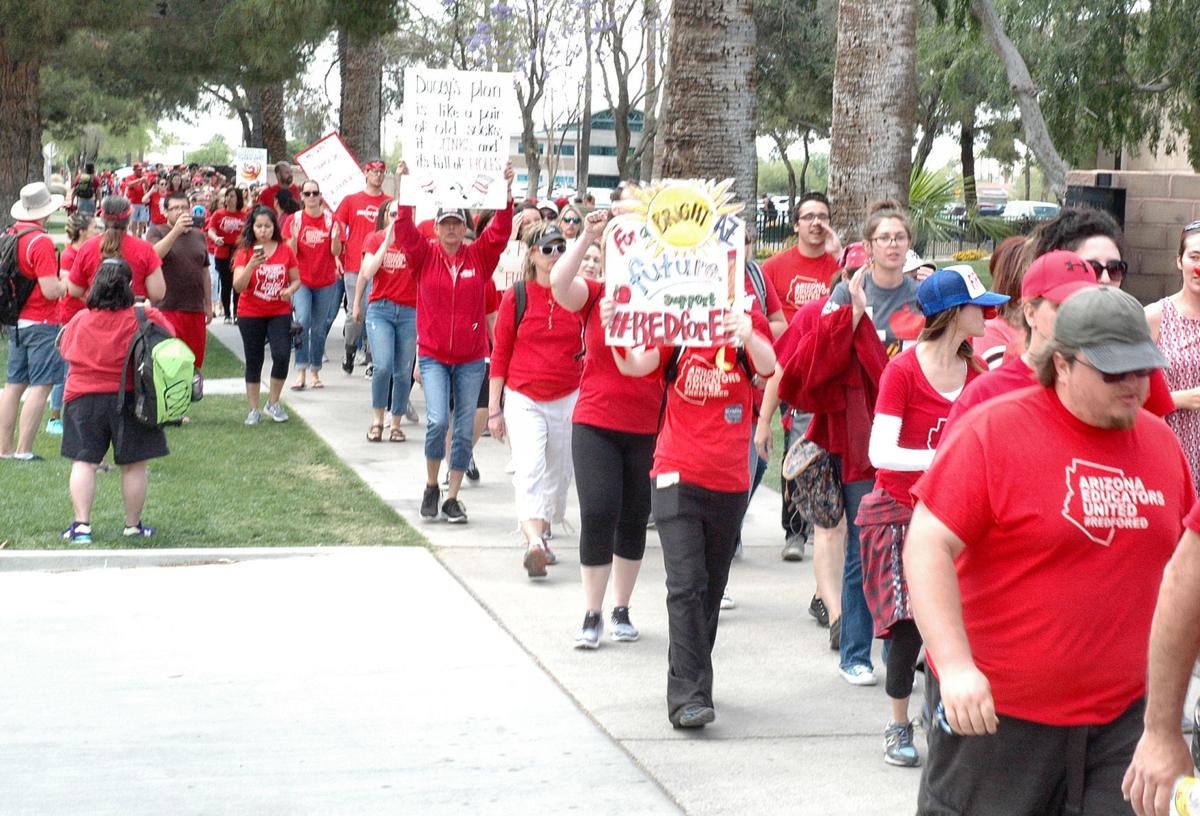 Thousands chanted “no budget, no school” as they marched around the Capitol. 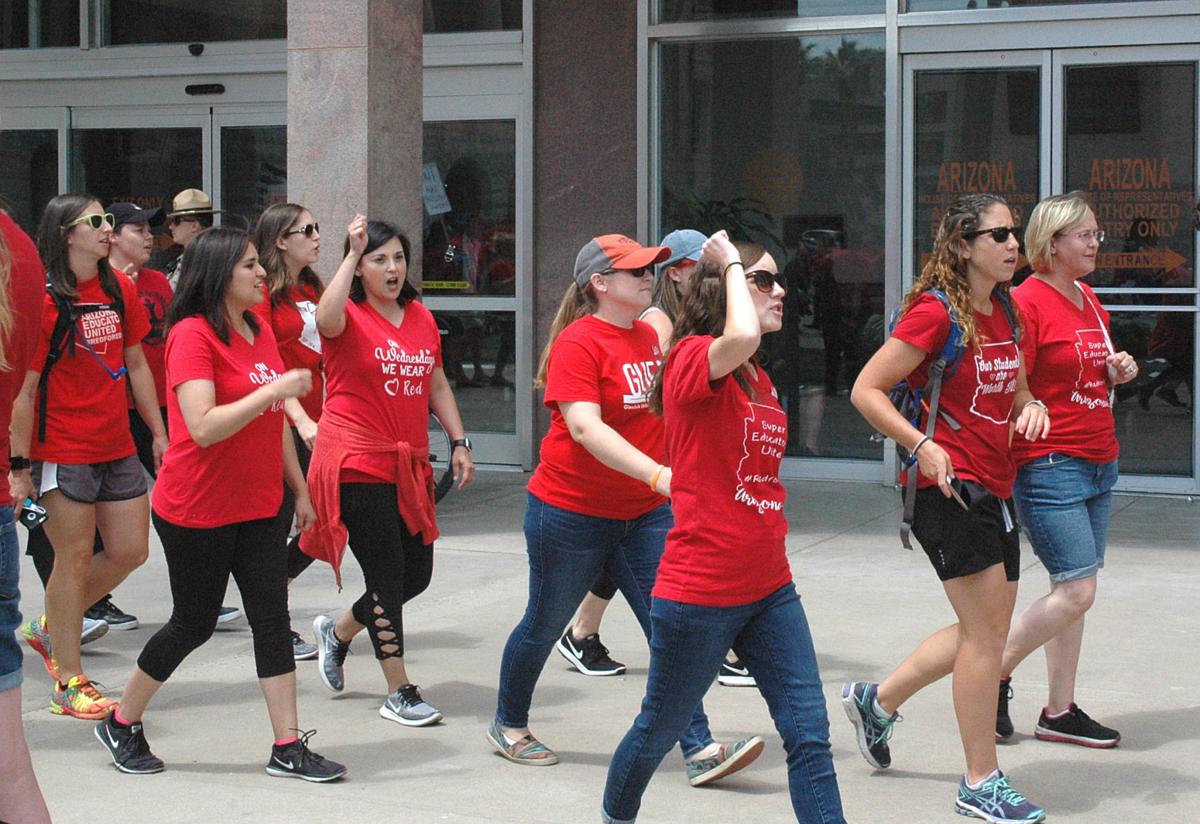 As teachers marched around the Capitol, many school districts that had planned to reopen Thursday opted to keep their doors shut. The walkout began last Thursday. 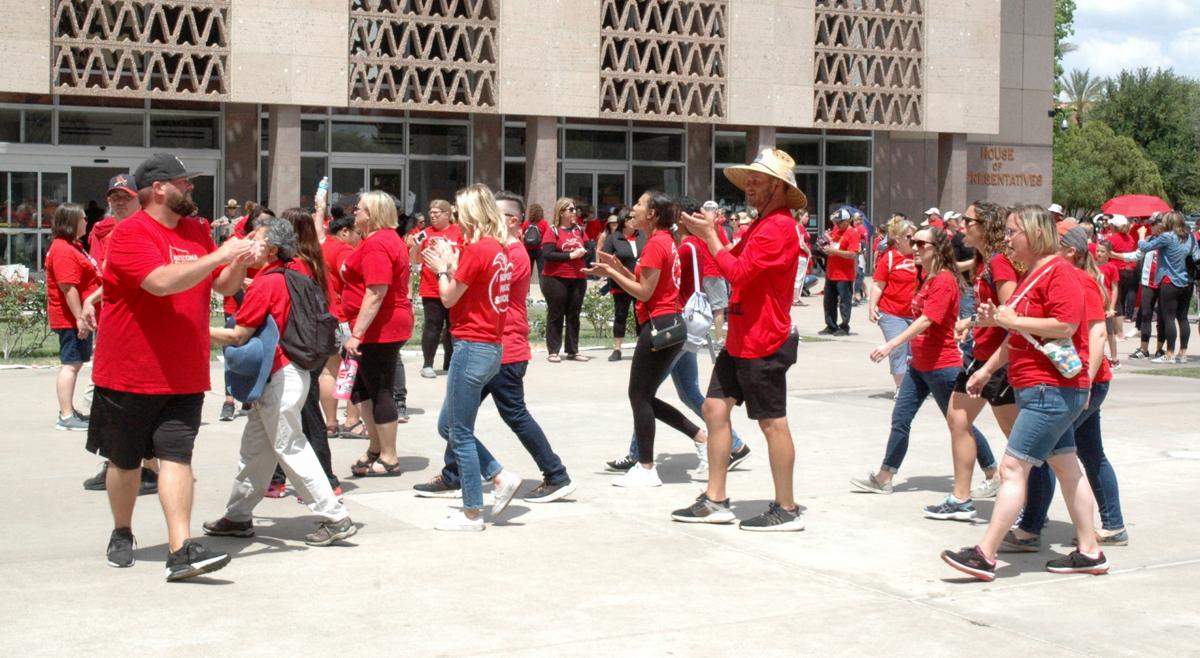 Leaders of the teachers’ groups say they want to get closure on the budget before ending the strike. Lawmakers say there is no deliberate delay, just some last-minute tweaks to be made. 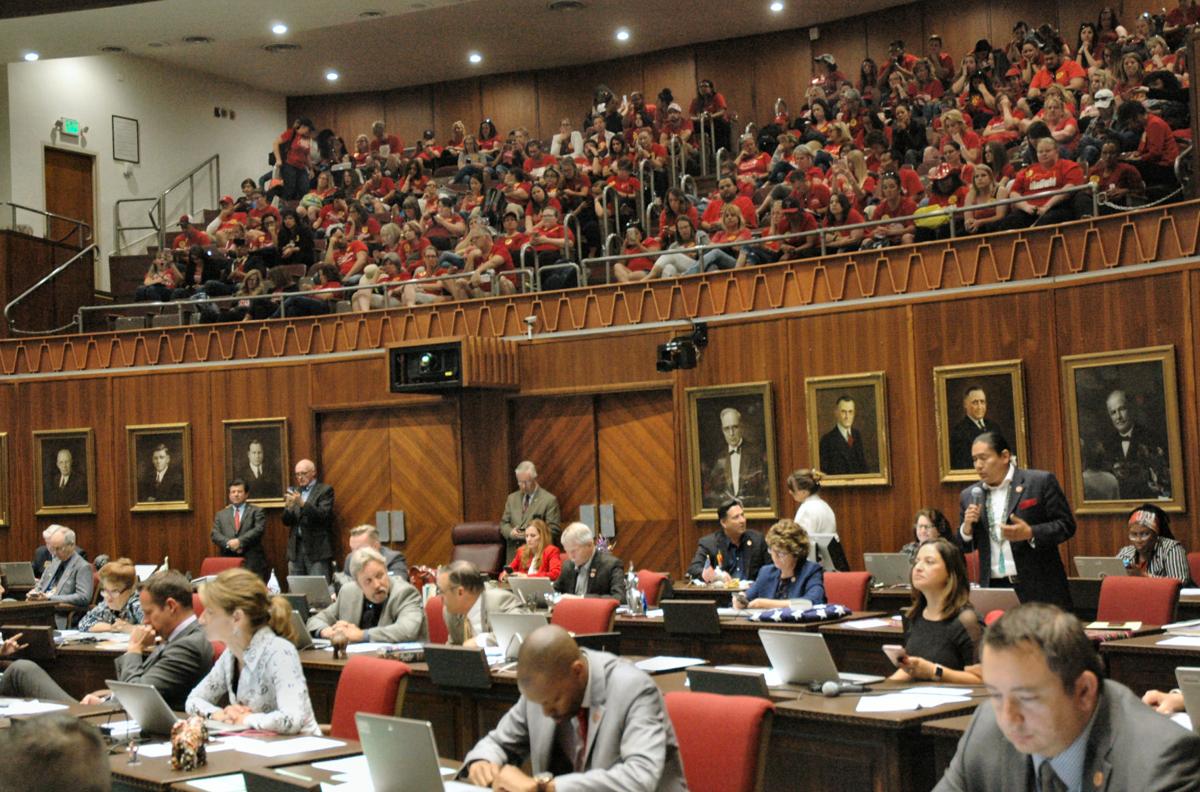 Teachers and their supporters filled the gallery in the Arizona House Wednesday as lawmakers worked on the $10.4 billion state budget.

PHOENIX — Arizona’s first statewide teachers’ strike is dragging into another day as many teachers decided they’re not quite ready to go back.

Leaders of education groups had said Tuesday that teachers would go back to their classrooms Thursday. That was based on the belief that the state spending plan — including a promised pay raise — was pretty much locked in and would be enacted and on its way to the governor’s desk by the end of Wednesday.

But it became clear by midday Wednesday that lawmakers were having trouble putting the final touches on the state’s $10.4 billion budget. Instead, legislators were working late into the night in hopes of getting something to Gov. Doug Ducey at some point Thursday.

The work in that direction, however, left teachers unimpressed — and unwilling to go back to work just yet. Thousands marched around the Capitol, chanting “no budget, no school.”

Joe Thomas, president of the Arizona Education Association, said the decisions not to go back to classrooms without an approved state budget were being made not by his group or leaders of Arizona Educators United, but instead on a teacher-by-teacher basis.

“What we said is, ‘This may go another day. You all are going to have to decide whether you’re going to be in or out,’ ” Thomas said.

That, in turn, put the issue directly in the hands of school officials to decide, based on feedback from their staffs, whether they thought there would be enough showing up to schedule classes or open the buildings. The answer came back quickly as many schools that had planned to reopen Thursday opted to keep their doors shut. The walkout began a week ago.

Thomas said there is strong sentiment among some educators to remain out until it’s absolutely clear that the package, including the $306 million for the first year of teacher pay increases, is signed into law.

“There’s people that absolutely want to see this thing all the way through,” he said. “They’ve got to get closure on this.”

There’s something else: “They don’t trust the Legislature,” Thomas said. “Or maybe they do trust them — to do the wrong thing.”

The message was the same from the organizers of Arizona Educators United. “We need everybody here at the Capitol until the budget is passed,” said organizer Dylan Wegela.

Sen. John Kavanagh, R-Fountain Hills, said there was no deliberate delay. He said there were some last-minute tweaks to the spending plan, which has already been approved by the Appropriations Committee he chairs.

Kavanagh told Capitol Media Services most of those have no effect on the education side of the budget. He said the only change in the language is to “clarify” that the intent of the proposed 19 percent average pay increase for teachers by 2020-2021 is that all the money will, in fact, go to teachers.

That language still left some lawmakers dissatisfied as they pointed out the method of dividing up the cash will leave teachers in some districts short.

In essence, the money is being handed out on a bulk basis. So districts with more mature teachers already making more money will get less; districts with lower-paid teachers will have enough to give out more than 19 percent.

House Speaker J.D. Mesnard, R-Chandler, agreed the delay is not on purpose. “I’d tell the teachers the process takes time,” he said. “We’re moving as fast as we can.”

Mesnard said the budget is the biggest thing lawmakers do each session. In fact, it’s the one thing that lawmakers are constitutionally required to do.

“We’re a little bit late,” he conceded, as the legislative session had been scheduled to wrap up two weeks ago. “But this is pretty much par for the course when the budget would be passed.”

It’s not just adoption of the budget that is slowing up the end of the session.

Legislative leaders kept lawmakers busy Wednesday with votes on a variety of other leftover issues.

For example, the Senate approved legislation saying people will lose their unemployment benefits after four weeks if they don’t take any job offered to them, regardless of whether it’s in their field or pays substantially less than the job they lost.

The House, on a party-line vote, pushed through a resolution to ask voters to revamp the Independent Redistricting Commission to draw legislative and congressional districts amid claims by Mesnard that the process used after the last census was “clouded by allegations of commission work being conducted behind closed doors, obscured from the public’s view.”

And lawmakers gave final approval to a bill that will allow automated “personal delivery devices” weighing up to 200 pounds to roam Arizona sidewalks.

The budget the educators were waiting for lawmakers to enact does not give educators a lot of what they want.

Missing is restoration of more than $1 billion taken from K-12 funding in the past decade. Also not in the plan is bringing per-student funding in Arizona up to the national average.

They were not giving up without a fight. Democratic supporters in the Legislature were poised late Wednesday to offer several amendments.

One would set the maximum class size at no more than 25 students. Other proposals would add more guidance counselors and spell out that support staff, left out of the teacher raise, would be entitled to a 10 percent pay increase.

The package doesn't meet the demands of educators who went on strike Thursday.

As Arizona's teacher strike begins, here are 4 ways the walkout could end

Thousands of teachers walked off the job with no clear end in sight.

Some school districts promise to keep schools open, even if they can’t provide instruction.

Thousands chanted “no budget, no school” as they marched around the Capitol.

As teachers marched around the Capitol, many school districts that had planned to reopen Thursday opted to keep their doors shut. The walkout began last Thursday.

Leaders of the teachers’ groups say they want to get closure on the budget before ending the strike. Lawmakers say there is no deliberate delay, just some last-minute tweaks to be made.

Teachers and their supporters filled the gallery in the Arizona House Wednesday as lawmakers worked on the $10.4 billion state budget.