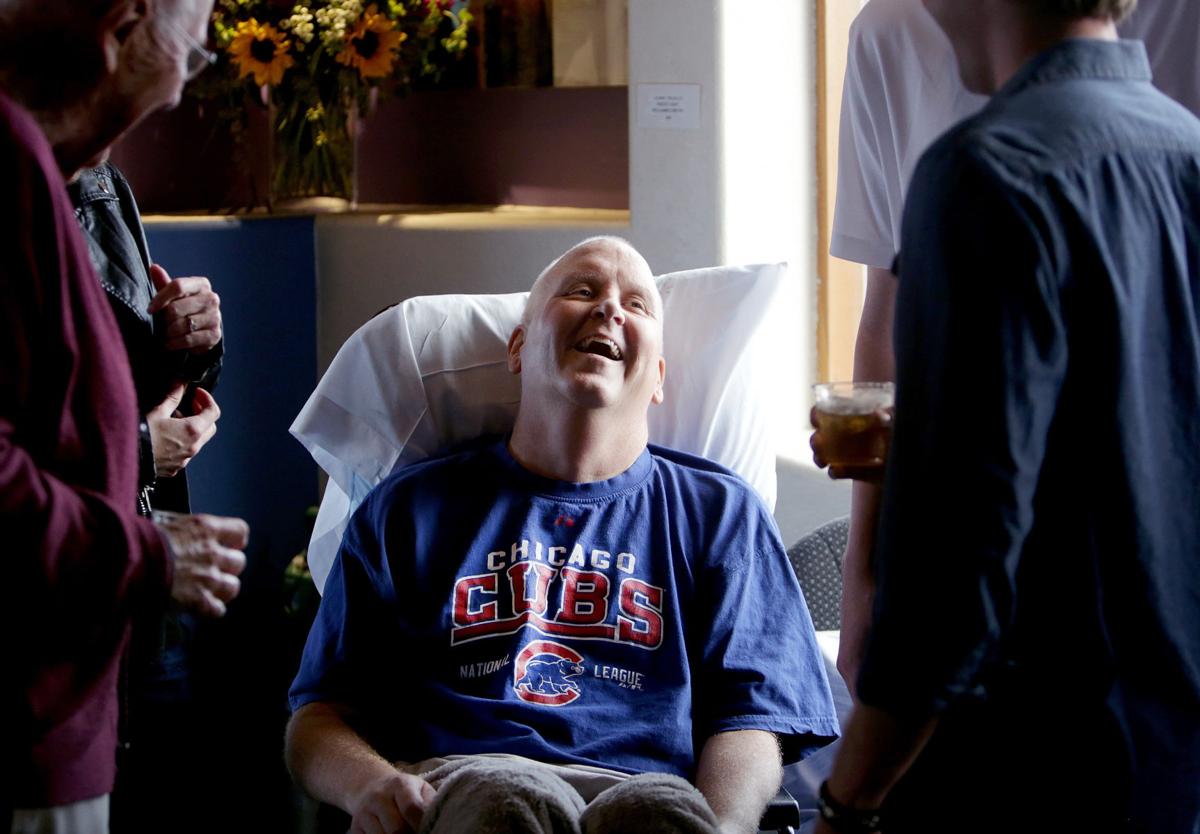 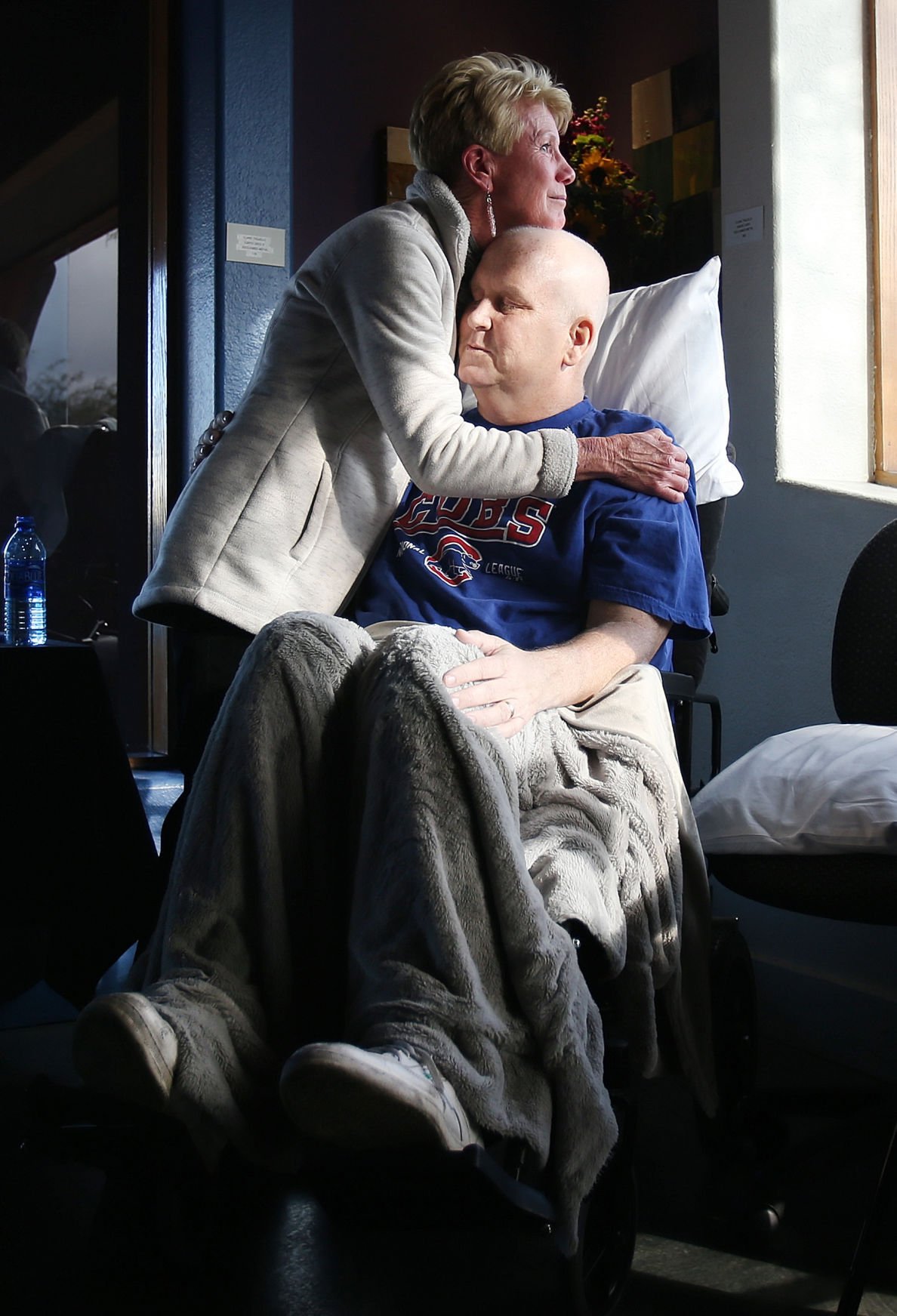 Pat Connors, who died early Sunday, shared a moment with friend DeeDee McCabe at his living wake at Pastiche on Tuesday. 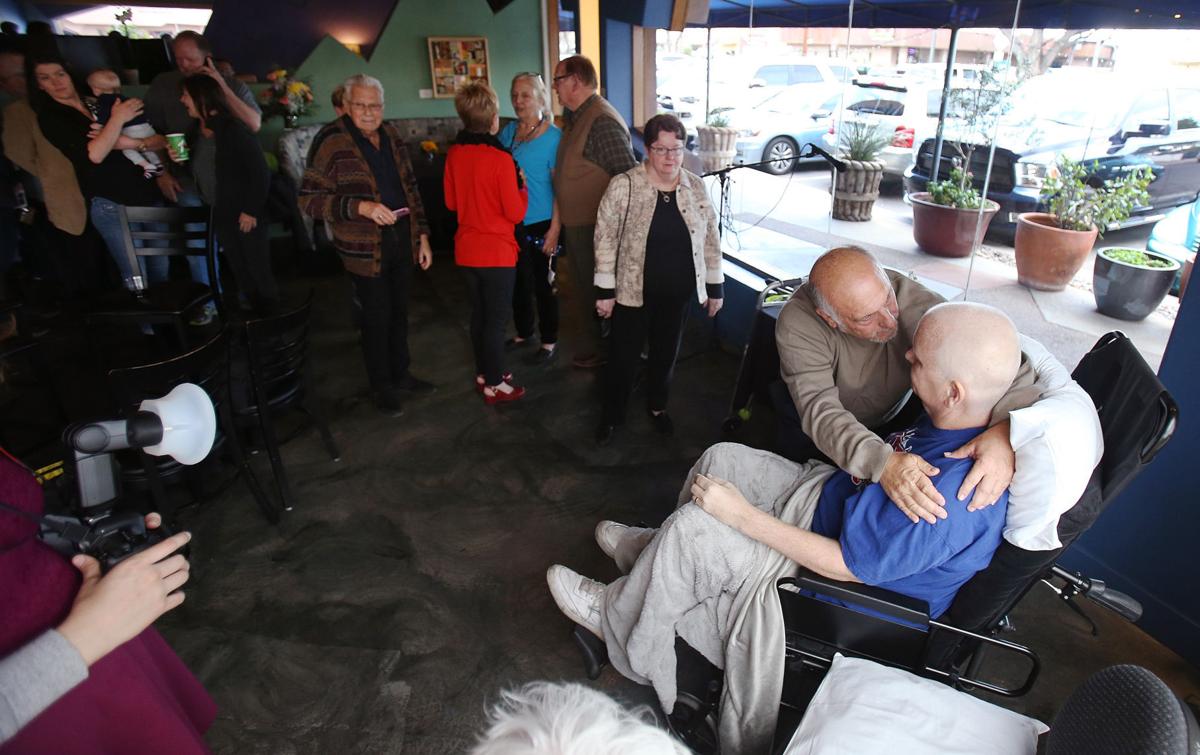 Friends, family and colleagues line up to visit with Pat Connors during his living wake at Pastiche, 3025 N. Campbell Ave, on Feb. 28, 2017, in Tucson, Ariz. Connors, who is terminally ill, held the event to say goodbye to close friends, family and longtime patrons.

From that moment in the doctor’s office last November, when they hit him with the diagnosis — stage 4 lung cancer — Tucson restaurateur Pat Connors knew how he wanted to go out.

With a party. A big, giant, messy affair where laughter filled in for tears and deep long hugs replaced casual hellos.

On Tuesday, Connors got his party.

“I wanted people, if they could, to come say goodbye,” he said, as a reception line that quickly grew from a couple dozen to a couple hundred winded around booths and the bar, wrapped around tables of cheese and fruit plates and snaked into the kitchen area of Connor’s central Tucson restaurant. “It kind of developed into this.”

Dozens of people showed up early for “Wake me up; a party for Pat” — which Connors dubbed his “pre-wake wake” — and by the official party start time at 4:30 p.m., the restaurant was packed. Some guests told Manish Shah, who organized the party with Michael Luria, Kristin Brakke and a couple other friends, that they had to park four or five blocks from Connors’ 19-year-old Pastiche Food + Drink, 3025 N. Campbell Ave.

Friends, family members, business associates and longtime diners nibbled on pizza and pasta, Hawaiian barbecue, jerk chicken, crusty breads and sweet rolls, enchiladas and mini-chimis, and other offerings from some 40 Tucson restaurants that had turned up to honor one of their own. Servers would replace every empty tray of food with a full platter from a different restaurant.

Connors said he set the date for Tuesday’s party last Monday, the day he was admitted to Tucson Medical Center’s hospice facility Peppi's House. After four rounds of chemo, the last of them in mid-January, doctors told Connors, 46, that his cancer was growing and it was terminal.

“As the prognosis came through that it wasn’t going to work and I was at 1 percent chance, I thought today is the day to start talking about what is good for everybody,” said Connors, sitting in a wheelchair with a blanket draped over his legs. “It’s the best thing in life; I am here with my family.”

David Torkko, a longtime Pastiche wine vendor, was one of the first people in line. He squeezed Connors’ hand and explained that he had just come from his dermatologist and that’s why he had a bandage on his cheek.

“That’s even better. That means you gave something to come see me,” Connors joked.

“I wouldn’t have missed this for the world,” Torkko said. “I will never forget this night.”

“There’s some of my customers over there,” he said, pointing to a small group. “You look at this room and you realize this is going to go on for four hours or more and this is just the people who could make it today.”

Levy said Connors is a stronger man than he ever could be in the face of death. He imagines that if he was staring down a terminal diagnosis and the end could be mere days away, he would not likely be in the mood to surround himself with hundreds of people.

“He’s a stronger person than I could ever be. This is completely his style,” Levy said. “Here’s the guy who underwent really aggressive treatment and is exhausted and shows up on a gurney and he is going to smile and hug a thousand people.”

“When you think about it, it makes sense,” added Connors’ sister-in-law Jennifer Connors, with her 11-year-old daughter, Abby, by her side. “Who wants to miss out on people saying all these nice things about you? But I hate that we’re going to lose him.”

“I knew there was going to be a lot of people and that’s what’s going to make him happy,” Abby chimed in. “I’ve only seen him smile since I got here. He’s so happy.”

Connors’ son Cole said his father told him he had two goals: to live to see Cole’s birthday — he turned 20 on Sunday — and to attend his pre-wake wake.

“Now we have to find some other goals for him,” said Pat Connors’ big brother Chris, who said Tuesday’s party fit his brother’s outgoing personality and love of Tucson. “The ability to say I love you one more time is a godsend.”

Pastiche's Pat Connors dies days after hosting his own wake

Six months he wouldn't wish on anyone

Local chefs to cook up philanthropic feasts for Primavera

Participants can join in preparing meals for restaurants.

Jazzing things up at Pastiche

Pastiche Food and Drink has launched a jazz night on Fridays.

In 20 seconds: How to make an Indian taco

Museum is offering a variety of activities, booths for its "Outdoors Day" celebration.

Tucson's winter goes down as 4th warmest on record

After a winter warmer than the one they had in Phoenix, you may not notice the season has changed.

Tucson weather: Warming up for the weekend

Old Gus and Andy's on Oracle being revived as The O

Restaurant will take on multiple personalities including night club and sports bar.

Pastiche owner's remains headed to Ireland to be reunited with his parents.

Jasmine to close; owners have no plans to move halal-certified grocery store.

Pat Connors, who died early Sunday, shared a moment with friend DeeDee McCabe at his living wake at Pastiche on Tuesday.

Friends, family and colleagues line up to visit with Pat Connors during his living wake at Pastiche, 3025 N. Campbell Ave, on Feb. 28, 2017, in Tucson, Ariz. Connors, who is terminally ill, held the event to say goodbye to close friends, family and longtime patrons.