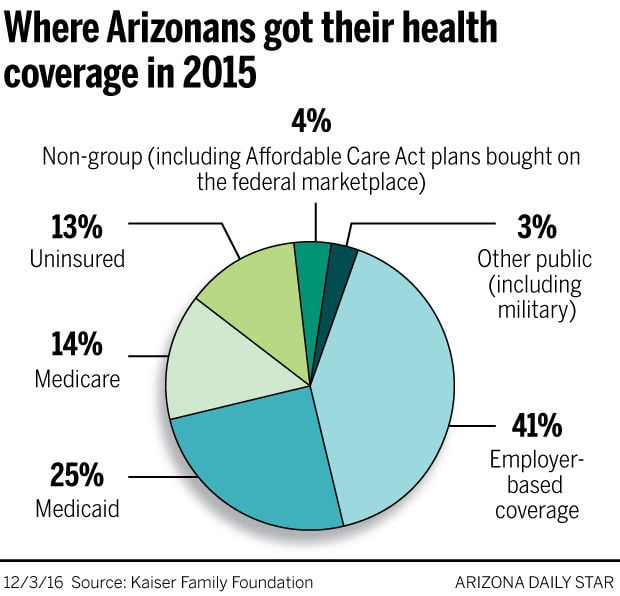 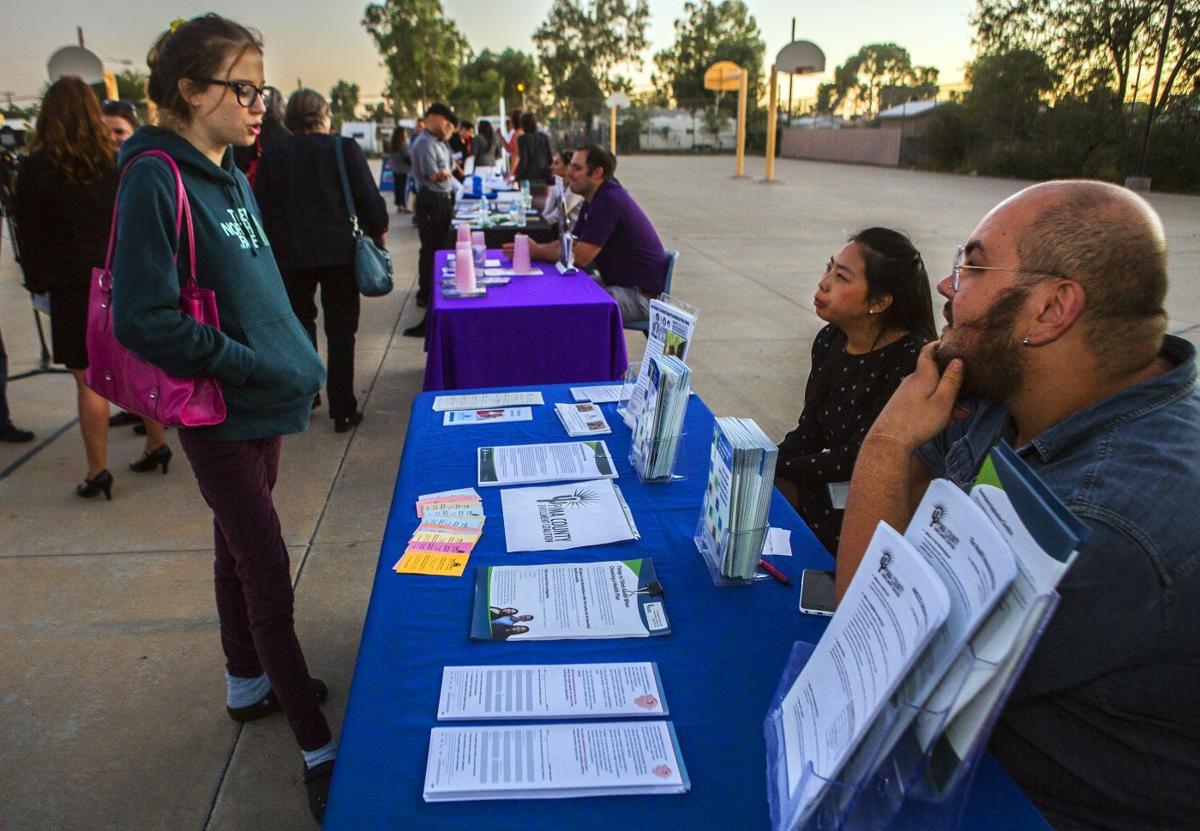 Ruby O’Brien, left, 17, chats at an Enroll America information table at Wakefield Middle School. She found out she can stay on her parents’ insurance until she is 26. At the table are Angelica Verdugo and Damian Alzua.

Help is still available for Southern Arizonans facing December deadlines to sign up for 2017 health coverage.

Two deadlines coming up affect two different groups — those on Medicare and those who purchase health insurance on the federal marketplace created by the Affordable Care Act.

•Wednesday, Dec. 7, is the open enrollment deadline for Medicare, a government health insurance plan for people over age 65, as well as for people under age 65 with certain disabilities and people of all ages with end-stage renal disease. Nearly 1 million Arizonans were on Medicare as of 2015.

• Thursday, Dec. 15 is the deadline for working-age people to enroll in Affordable Care Act health insurance available on the federal marketplace, if they want coverage to start Jan. 1.

You may not be affected by either deadline. Most Arizonans are not.

Confused? You are not alone. The health system is complex enough that the federal government trains “navigators” to help people enroll it it.

What’s important to remember, for starters, is that if you have Medicare you don’t need Affordable Care Act insurance, and vice versa.

While the election results have prompted questions, nothing is likely to change in 2017.

“A lot of clients are calling me worried about changes in the individual marketplace through the Affordable Care Act. They are worried it affects Medicare. But those are separate issues,” said Tucson insurance broker Michael Bravo, co-owner of Bravo Insurance Solutions.

The Pima Council on Aging is getting similar calls. People using the Affordable Care Act marketplace have very limited plan choices for 2017. But that is entirely separate from Medicare.

• The Dec. 7 Medicare open enrollment deadline (it’s 11:59 p.m. Arizona time Wednesday) is when all people with Medicare can change their Medicare Advantage and prescription drug coverage for the following year.

People on Medicare should always review the materials their plans send them, such as the “Evidence of Coverage” (EOC) and “Annual Notice of Change” (ANOC).

Anyone who is satisfied that their current Medicare Advantage or Part D prescription plans will meet their needs for next year, and are still being offered, doesn’t need to do anything, said Tucson insurance broker Denise Early, who maintains a blog about local Medicare offerings. “There are no big changes this year. and I think lots of people are staying with their plan.”

For people who use Banner Health facilities, there are now more choices of Medicare Advantage plans, and that has been a positive for local beneficiaries, Early said.

• Experts advise people on Medicare to review their plans, even if they like their current coverage.

Medicare health and drug plans could be making changes on items such as cost, coverage and what providers and pharmacies are in their networks, Bravo said.

“Check in and look at things like network enhancements and pharmacy changes, changes in ambulance co-pays, rehabilitation, physical therapy co-pays — it’s important to know what they are.”

The risk of not reviewing one’s options is that enrollees could be stuck with a plan that no longer fits their needs, particularly if they lose the doctor they’d been seeing because that doctor is no longer “in-network”, said Bravo, who is president of the Southern Arizona Association of Health Underwriters.

Humana’s Medicare Advantage plan for 2017 will not include the Carondelet Health Network, but Early said Carondelet notified beneficiaries by mail earlier this year.

• Many Medicare beneficiaries are paying too much for prescriptions.

“Most people are in the wrong Part D plan and are paying a much higher premium than they need to,” Early wrote in an email. “That’s because their Part D plan might have had a $25 premium a few years ago and now it is up to $50, or even $70.”

Current enrollees in stand-alone Medicare Part D plans are projected to face an average 9 percent increase in premiums if they remain in their current plan for 2017, according to an analysis by the Kaiser Family Foundation.

It’s possible to reduce one’s costs by reviewing the plans available, Early said. Anyone paying $40 per month or more is probably paying too much, she said.

“Drug costs are really such a big one for people,” Spritz said. “You can put in the medications you use, to see how they will be covered. It may change from year to year. … Sometimes staying with the same plan may not be what is best.”

•Help is available, and don’t be afraid to ask.

“It really is a system that is crazy complicated,” said Spritz. People with questions can go to the Medicare website, Medicare.gov, or call 1-800-MEDICARE.

Locally, the Pima Council on Aging has a Medicare help line: 546-2011. Leave your name and number and volunteers and staff will return calls during regular business hours.

Another option is going to a broker, which will not cost anything. Bravo advises checking with the Southern Arizona Association of Health Underwriters to find one.

If a broker is really pushing one particular plan, Spritz advises asking that person why. It could be because of the commission they are receiving.

She also advises against giving out your Medicare number to any broker or other insurance person before you are ready to sign on the dotted line. “Don’t give it out unless you are really sure,” she said.

The Council on Aging offers regular “new to Medicare” sessions, where people can learn the basics of Medicare Advantage, original Medicare, standalone drug plans and supplemental or Medigap plans.

• If there are any changes in Medicare under President-elect Donald Trump, they will not happen right away, and there will much public notice before any changes occur.

Some states have their own marketplaces, but Arizona uses the federal one — healthcare.gov — as do 38 other states.

ACA coverage is for working-age people who don’t have employer-based coverage, or who don’t get their health insurance via a government program.

•The Dec. 15 date is not a hard deadline for people who get their health insurance on the federal marketplace.

The open enrollment period for getting health insurance via the marketplace goes through Jan. 31. So if you miss enrolling by Dec. 15, there’s still time, though you may be without coverage for days or weeks. To get coverage that starts Jan. 1, people must apply, enroll and pay their first premium by Dec. 15.

•Marketplace choices for Pima County residents are slim for 2017. There are two plans available for people of all ages offered by Ambetter by Health Net, which is owned by Centene Corp., as well as one plan offered to people under age 30 by Blue Cross Blue Shield of Arizona.

•A Tucson open enrollment event for Affordable Care Act coverage will be held 9 a.m. to 1 p.m. Saturday, Dec. 10, which is National Youth Enrollment Day. The event will be held at Palo Verde High School, 1302 S. Avenida Vega, in the Family Resource Center, downstairs on the north side of the school. Enrollment assisters and navigators will help people find coverage they can qualify for, whether it’s Medicaid, KidsCare or marketplace coverage. They don’t provide help with Medicare.

There’s a toll-free number for Pima County residents to schedule free appointments to get enrollment assistance — 1-800-377-3536 — or they can sign up for an appointment online at coveraz.org/connector

Other options are for people to go to a broker, which does not cost any extra, or enroll themselves through healthcare.gov or by calling the federal marketplace at 1-800-318-2596.

“Headlines about big price increases for coverage only apply to people who do not receive financial help,” said Michal Goforth, executive director of the Pima Community Access Program. “Lower income families that qualify for financial help will see very small or no changes to their monthly premiums. Financial help goes up as premium rates increase.”

•What others are saying on social media or in conversations may not apply to you.

“What you pay for coverage depends very specifically on your income, family size and age,” Goforth said. “You don’t know what coverage will cost until you actually apply.”

•There are no enrollment deadlines for Medicaid, which in Arizona is called the Arizona Health Care Cost Containment System (AHCCCS). People may apply for and enroll in AHCCCS at any time of year. AHCCCS is a government insurance program for low income people.

Arizonans should not panic about health insurance choice, feds say

Some 205,000 in state purchased insurance on the federal exchange.

Percentage of uninsured residents dropped from 17 percent to 10 percent between 2013 and 2014, officials say.

Ruby O’Brien, left, 17, chats at an Enroll America information table at Wakefield Middle School. She found out she can stay on her parents’ insurance until she is 26. At the table are Angelica Verdugo and Damian Alzua.