PATAGONIA — When the final Spirit World 100 rider neared the finish line on the afternoon of Nov. 5, organizer Zander Ault called out on his 1950’s Elvis-style-mic for everybody to cheer the rider on.

As Nick Bardonnay crossed the line, a chorus of voices whooped and cheered.

It had taken Bardonnay nine hours and 40 minutes to finish the 100-mile race that winds from Patagonia through the San Rafael Valley to the Mexican border and back.

“Holy cow! Welcome back to Patagonia. You are incredible. This is kick (expletive)!” Ault said over the speakers.

When Ault and his partner, Heidi Rentz, founded the Spirit World race four years ago, they attracted 125 cyclists.

After flying below the radar in the world of cycling, Spirit World 100 last year was pushed into the spotlight when the competitive cycling website VeloNews named Patagonia the new gravel riding mecca.

That designation plays into Rentz and Ault’s overall plan, to make Patagonia a hotspot for cycling tourism.

That’s what the couple set out to do when they moved to Patagonia full time in 2020. They opened the Patagonia Lumber Company at the same location on McKeown Avenue of the original Patagonia Lumber Company that dates back to 1915 and established it as a coffee-and-wine-bar pit stop for people passing through. Regulars refer to it as “an extension of their living room.”

They also opened The Gravel House, which has a straw bale home and a small wooden studio for visitors of Patagonia. The property focuses on providing guests an intimate interaction with the community.

But the Spirit World 100 was what tied these endeavors together.

The duo dubbed the race “the Spirit World” because it’s “the place that we all go to when chasing endurance,” said Ault.

“When you’re out, challenging yourself through something that is incredibly hard, you break into this space where you’re doing it,” he said. “It’s hard; you’re going through highs and lows, but you come out on the other side successful and there is a level of bliss involved. That is the Spirit World. It’s a place that has no definition, but it is a space that we can all go to in the pursuit of endurance.”

The 2022 event started with fundraising dinner on Nov. 3. On Nov. 4, cyclists participated in a shake out ride to familiarize themselves with the desert terrain before gathering for a family-style dinner.

On Nov. 5, before the sun came up, the race started.

Spirit World has three routes: the 50-mile ride, the 80-mile ride and, for the hard core, the 100-mile venture into the desert.

The race finished at Patagonia Town Park with food, beer and music, and everyone who completed the trek earned a crystal and lots of hoots and hollers, including from the biggest cheerleader, Ault.

Clare Walton from Tahoe City, California, won the 100-mile race and was really inspired by the talk Rentz and Ault gave at the pre-ride dinner.

“Those words stuck with me,” Walton said. “To be together with other racers with a common goal of connection and community was really special. Everyone was really fired up to ride. The positive energy was definitely flowing through the Spirit World.”

Racers come to know the outdoor space in an intimate way after hours of riding. Riders of all caliber participated from seasoned professionals to first timers; the event welcomes all to experience the thrill of riding in the desert.

Thomas Hudson, a first-timer at the Spirit World 100, said, “It feels cool to finish my first race, being a part of a community of people doing the same thing at the same time. It feels special.”

Hudson said there were parts of the race that were especially challenging, but other parts were really fun.

“There was a long section in the middle where there was a slight descent and you could pedal and I was totally alone just flying through the desert,” he said, adding that he planned to become a regular at future events.

Throughout the day as riders came across the finish line, fellow riders and fans who cheered them on went crazy with applause, which is part of Rentz and Ault’s philosophy for the race and community. When people link arms, they can achieve large goals. Their intention of the race goes beyond the sport; they see the importance of community and are conscious about the way events like these impact their rural town.

The race day finished up with a show in the park by Tucson Grateful Dead cover band Half A Mile From Tucson.

The fourth annual event ended with an award ceremony on Nov. 6, capping a weekend of riding that cyclist Jack Price from Montana called “a really rad” experience.

“We want the general public, who enjoy this atmosphere, to come back to Patagonia because they see its value, and they want to be a part of it,” Ault said. “We want to see the Spirit World become an institution that can have a really large impact on the area and create jobs for this rural community.

“The underlying theme and what drives the excitement for the event is continuing to come up with ideas as to how we can interact with the landscape and each other,” he added.

Registration for the 2023 Spirit World 100 will open in January. Visit thespiritworld100.com for more information on the race and Patagonia bike scene.

El Inde Arizona is a news service of the University of Arizona School of Journalism.

SONOITA — Wine can be stuffy business, with all the swirling-in-the-glass, let-it-breathe etiquette.

Drink beer, enjoy a good hike and live the Wild West lifestyle with your dad in neighboring Cochise County, east of Tucson. 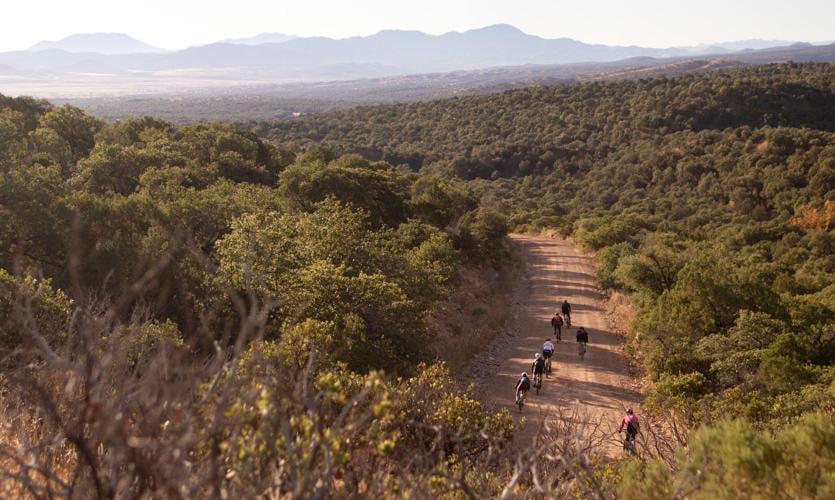 The gravel roads of the San Rafael Valley that wind on forever, into the Spirit World they go. 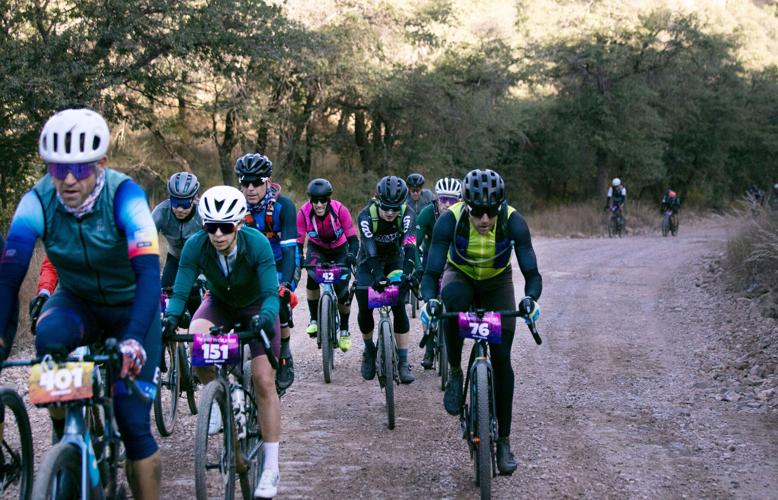 Clare Walton, second from left, the eventual winner, holding her own in the pack. 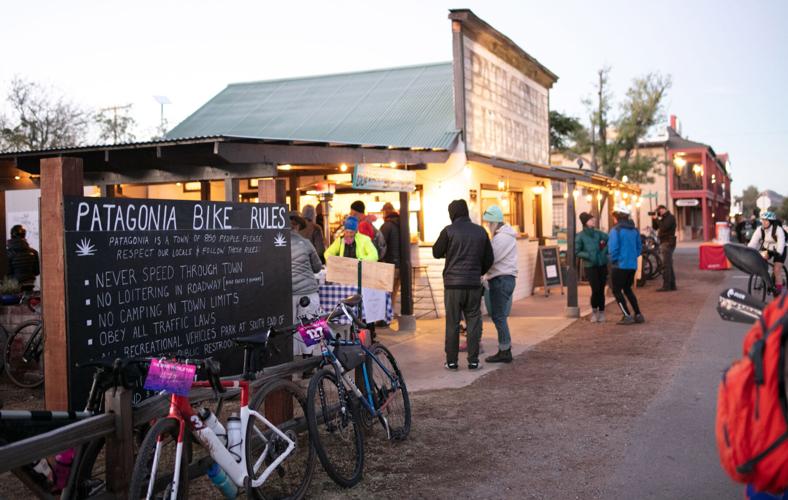 Patagonia Lumber Co. serves as a coffee-and-wine-bar pit stop for people passing through. 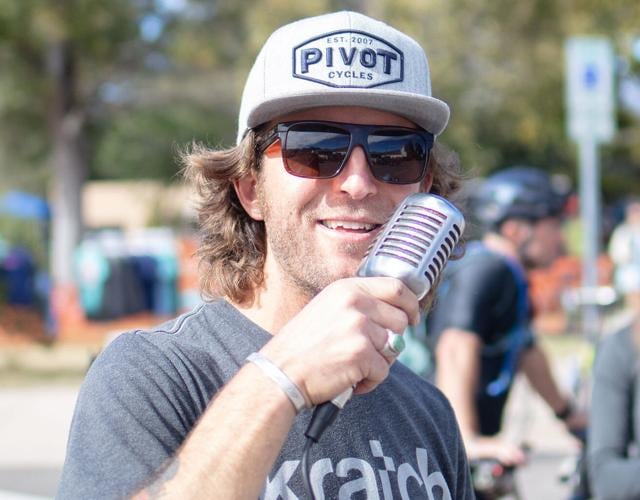 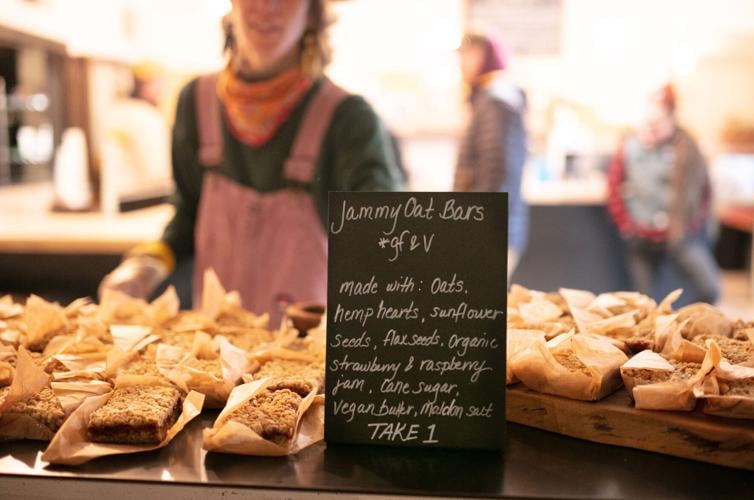