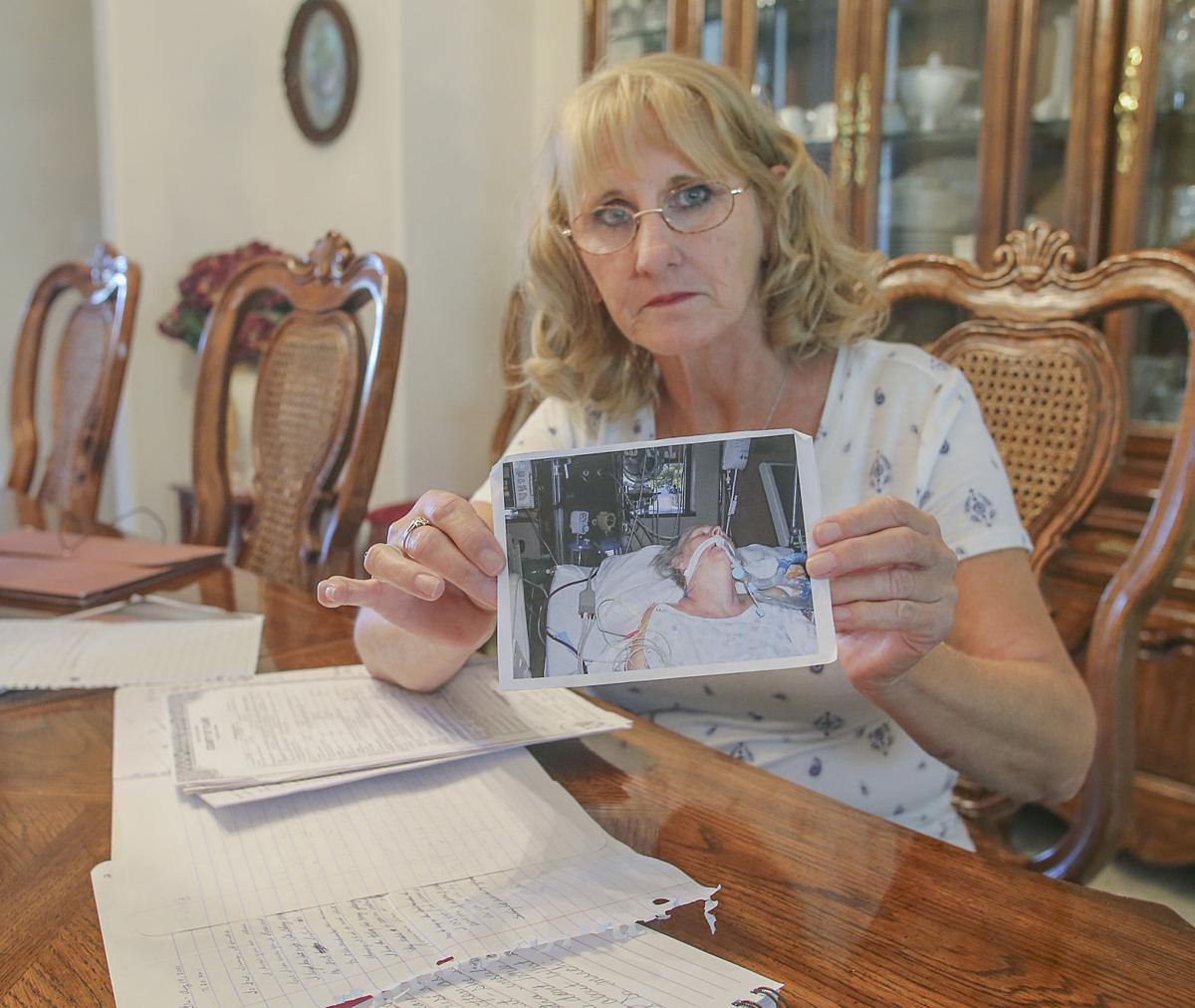 Elizabeth Mulikin holds a photograph of her sister, Edie Preller, as she battled valley fever. Preller died in 2008. 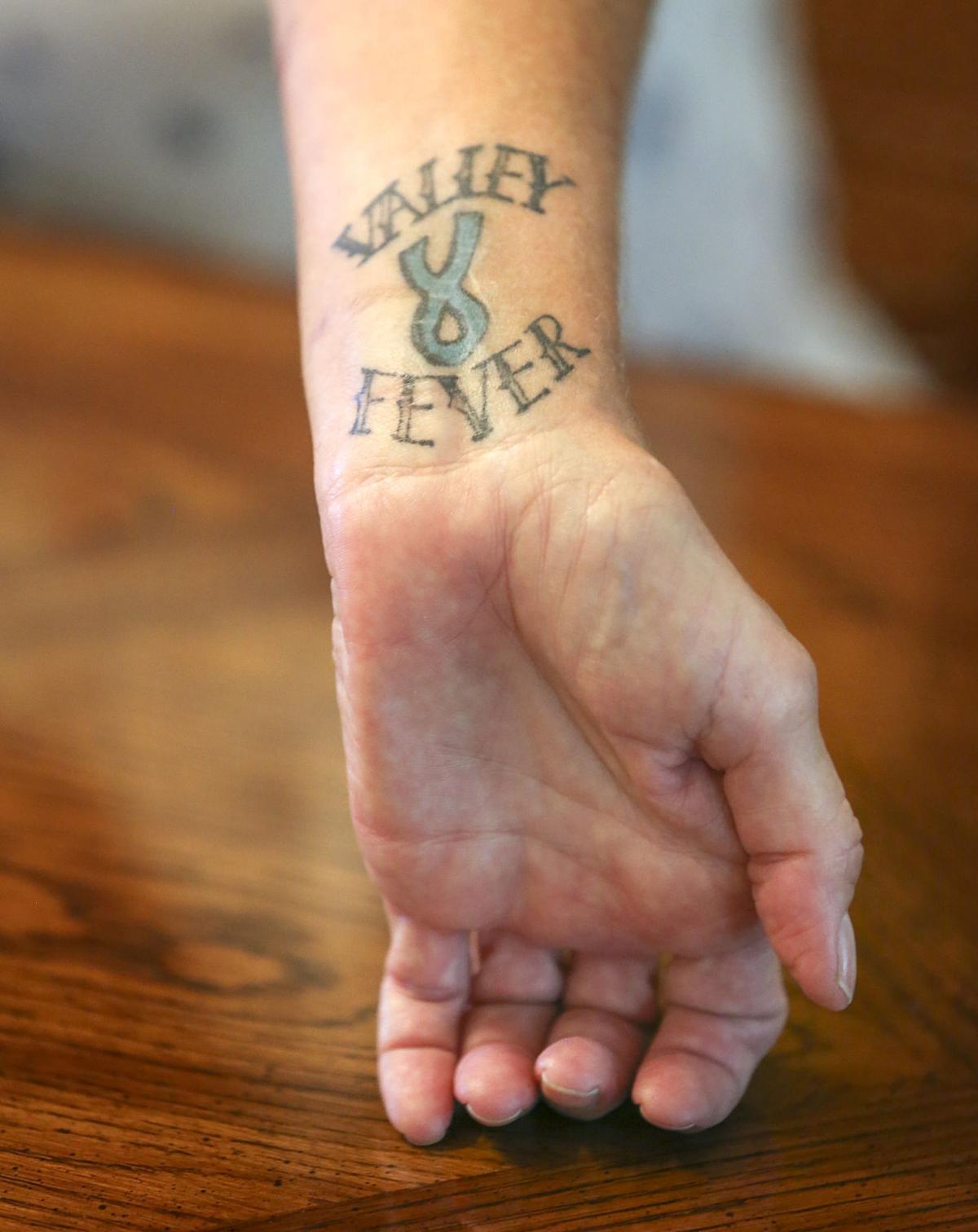 Elizabeth Mulikin has a tattoo that reads "Valley Fever" on her wrist. Her sister, Edie Preller, died from valley fever on May 18, 2008. 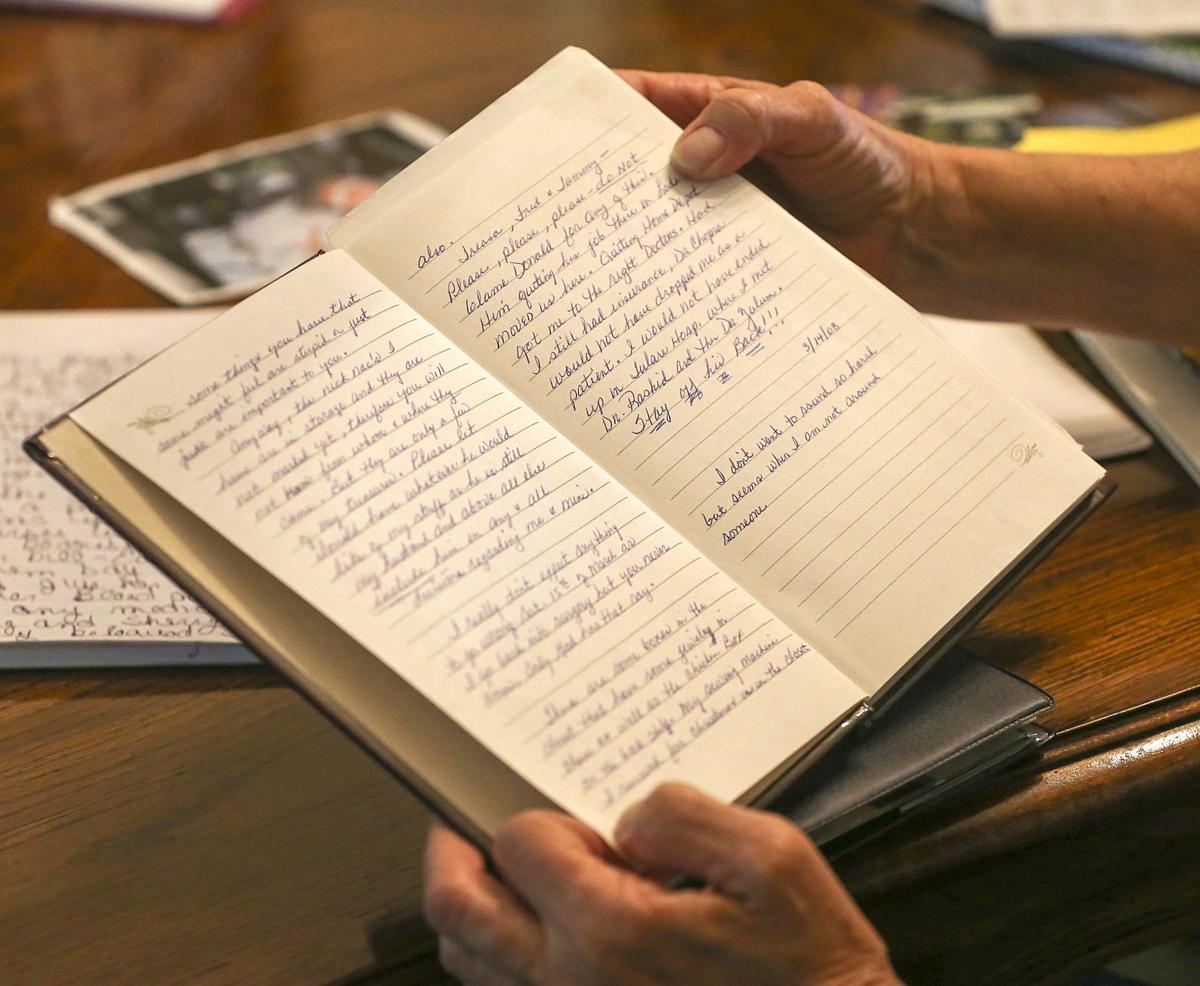 Edie Preller kept a journal as she struggled with valley fever during the last years of her life. 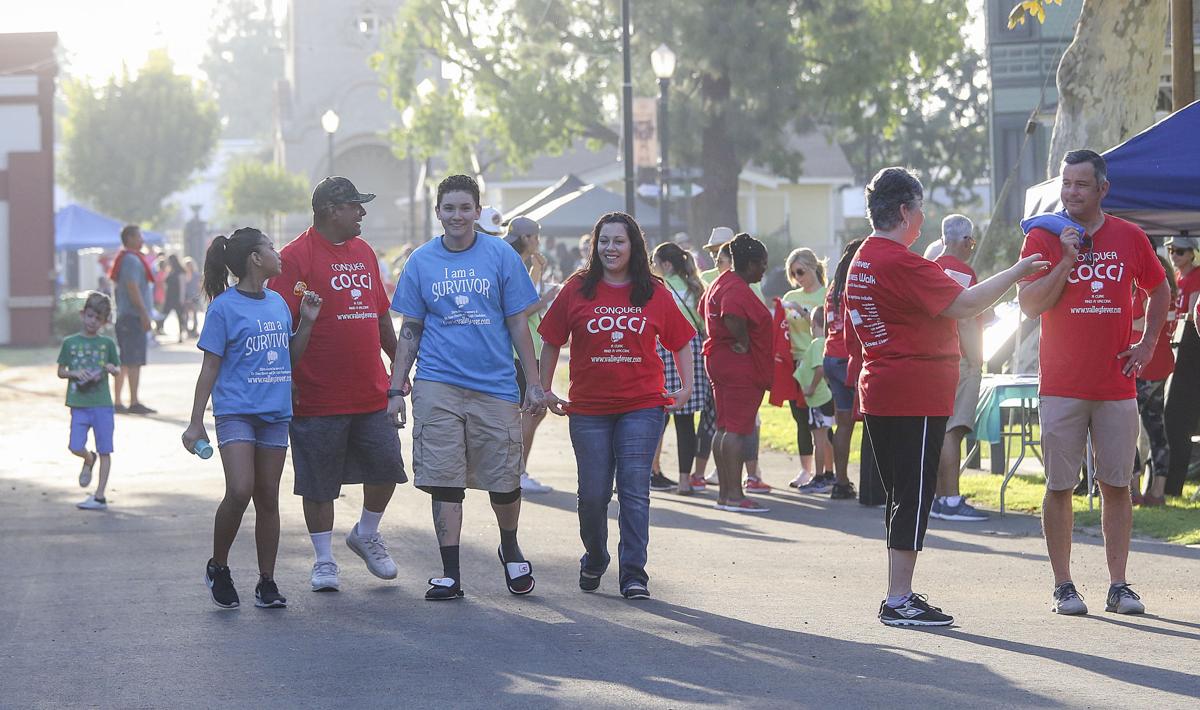 People arrive for the annual Valley Fever Awareness Walk held at the Kern County Museum, in California, in August. The walk is one way locals try to spread awareness of the illness.

Initially, doctors thought Edie Preller had pneumonia, then tuberculosis, or maybe bronchitis. They quarantined her and ran tests. Six months later they discovered she had inhaled a deadly spore from a fungus that grows throughout the region. The spore caused valley fever, which spread from her lungs into her brain.

Preller had been an in-home health-care worker, taking care of other people who were ill. Then, in her 50s, she ended up in a losing battle for her own life, spending her last three years in and out of a hospital.

She described the agony of medical procedures in her journal, “like someone hit a line drive golf ball into a barrel and it ricocheted around.” Another day, all she could manage were the words “very painful.”

When Preller became too ill to write, she asked her family to continue raising awareness of the disease. “Make sure that the public is aware of what valley fever is and how it destroys your life,” she wrote on Feb. 25, 2008. “Mine is not over yet, and I am doing my best to not be another statistic to this disease.” She died soon after at the age of 61.

Who is looking out for future Edie Prellers?

Drive around Tucson on any day and you will see billboards for restaurants, bars, upcoming events and lots of organizations trying to persuade people to do something. Bring a designated driver when you go out drinking. Put down your cellphone in the car. Neuter your dog. Not one says anything about a damaging public-health threat in Arizona and California: valley fever.

The Center for Health Journalism Collaborative asked experts in social behavior and public health what needs to be done to make the disease top of mind. They focused on three main ideas: Create a simple message that everyone can remember, turn that message into a social movement, and regularly survey the public to find out if awareness has increased.

People can lower the risk of developing valley fever by wearing a mask if working outdoors or by staying inside when it’s windy. There is no vaccine for the disease, and no treatments completely eliminate the fungus from the body. But early diagnosis and treatment usually lead to better outcomes.

Reaching the general public requires a simple and sustained public-awareness campaign on prevention and warning signs.

Public-health officials could take a page from the book of the “Click It or Ticket” campaign, which encouraged widespread seatbelt use. The nationwide effort grew out of a county pilot program in North Carolina funded by the auto insurance industry. Seeing progress, Congress appropriated more than $8 million annually for a national campaign.

As a result, national seatbelt use increased 20 percentage points in an eight-year period, the biggest spike in the history of traffic safety, said Madalene Milano, a partner at GMMB, an international communications firm behind the campaign.

To be successful, experts say, awareness campaigns aimed at the general public must carry a consistent message and be deployed at times when people are most vulnerable to disease. For valley fever, that’s in early fall, when the wind begins blowing spores in the air.

A message, a movement

Although government funding was important in the campaign against drunken driving, community organizations took up the banner and made it a top cause, raising private funds to push for tougher laws against driving under the influence and to pay for public-awareness advertising. Mothers Against Drunk Driving served as an early example of a powerful public-health campaign driven by grassroots organizing.

“Money going toward public-health issues is dwindling big time, so you have to think beyond government as a source because it’s not as likely to come to fruition,” Milano said.

Rob Purdie, president of the Bakersfield-based Valley Fever Americas Foundation, said his group and others need to become more assertive in making requests for government action.

“Nothing’s been asked of them recently. We can point fingers, but nobody has asked,” Purdie said.

A simple public-health message has been turned into a movement to combat rising rates of sexually transmitted diseases in Kern County, California. The county’s STD campaign, “Know Your Risk,” has consistent messaging, with public-service announcements airing on radios and television, and highway billboards grabbing the attention of passersby. One TV commercial features pregnant Kern County Supervisor Leticia Perez, who urges women to seek prenatal care to prevent congenital syphilis.

Public-health advocates have lobbied schools for more robust sex education, generated jarring maps detailing how many teens are contracting STDs within certain high school boundaries and have created a long-range plan to reduce infections across the county, which has some of the highest STD rates statewide.

“It’s surpassed a campaign,” said Michelle Corson, a public-relations officer for Kern County’s public-health department. “It’s a movement” — a movement made possible by $46,000 in state funding, less than one-thousandth of 1 percent of the $3.3 billion budget California’s governor allocated to public-health agencies this fiscal year.

Valley fever’s share for awareness? Despite high infection rates, nothing.

“H1N1, Ebola, Zika can all get large special funding, but with valley fever, we’re on our own for awareness funding,” said Matthew Constantine, Kern County’s director of public-health services.

Awareness campaigns could help prevent misdiagnosis. Arizonans who knew about valley fever before they became infected received a diagnosis sooner than those who did not know about the disease, a 2008 Arizona Department of Health Services study found.

Today, too many patients receive unnecessary anti-bacterial medications because of misdiagnosis when what they need is anti-fungal drugs to combat valley fever, said Dr. John Galgiani, director of the University of Arizona’s valley fever center. The effect of those delayed diagnoses is protracted patient anxiety and expensive, potentially unnecessary tests, he said.

Without surveys to gauge the effectiveness of campaign approaches, there is no way to know whether money is being well-spent. As a result, limited funds are being spent without any assessments of whether campaigns are working.

Preller’s sister, Elizabeth Mulikin, does her own type of survey. She asks everyone she can what they know about the disease and its symptoms. And she despairs about widespread ignorance about the disease.

“My best friend doesn’t even know,” Mulikin said, adding that some of her friends who attended a valley fever awareness walk in Bakersfield last year thought the disease was a variation of the flu.

When that happens, she takes out a photo of her pale sister in the hospital, head flung back, tubes protruding from her body.

“This is valley fever,” she tells them. “It has to stop.”

Valley fever infects more than 13,000 people annually in Arizona and California and kills more than 100.

University of Arizona valley fever research seeks why some get sicker

NIH grant will focus on genetics.

The 926 cases reported in November was the highest monthly total since September 2015.

Elizabeth Mulikin holds a photograph of her sister, Edie Preller, as she battled valley fever. Preller died in 2008.

Elizabeth Mulikin has a tattoo that reads "Valley Fever" on her wrist. Her sister, Edie Preller, died from valley fever on May 18, 2008.

Edie Preller kept a journal as she struggled with valley fever during the last years of her life.

People arrive for the annual Valley Fever Awareness Walk held at the Kern County Museum, in California, in August. The walk is one way locals try to spread awareness of the illness.