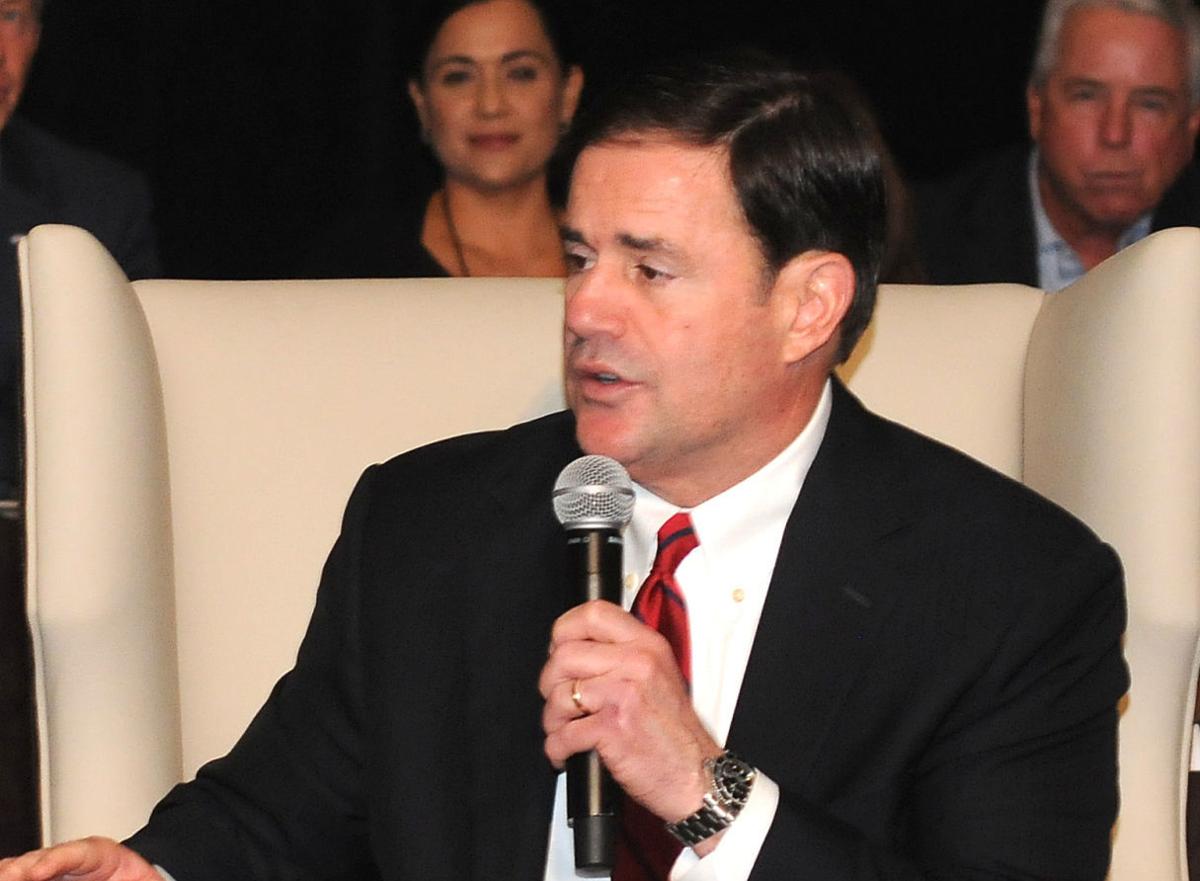 Gov. Doug Ducey has reshaped the state Supreme Court by manipulating membership of the Commission on Appellate Appointments. 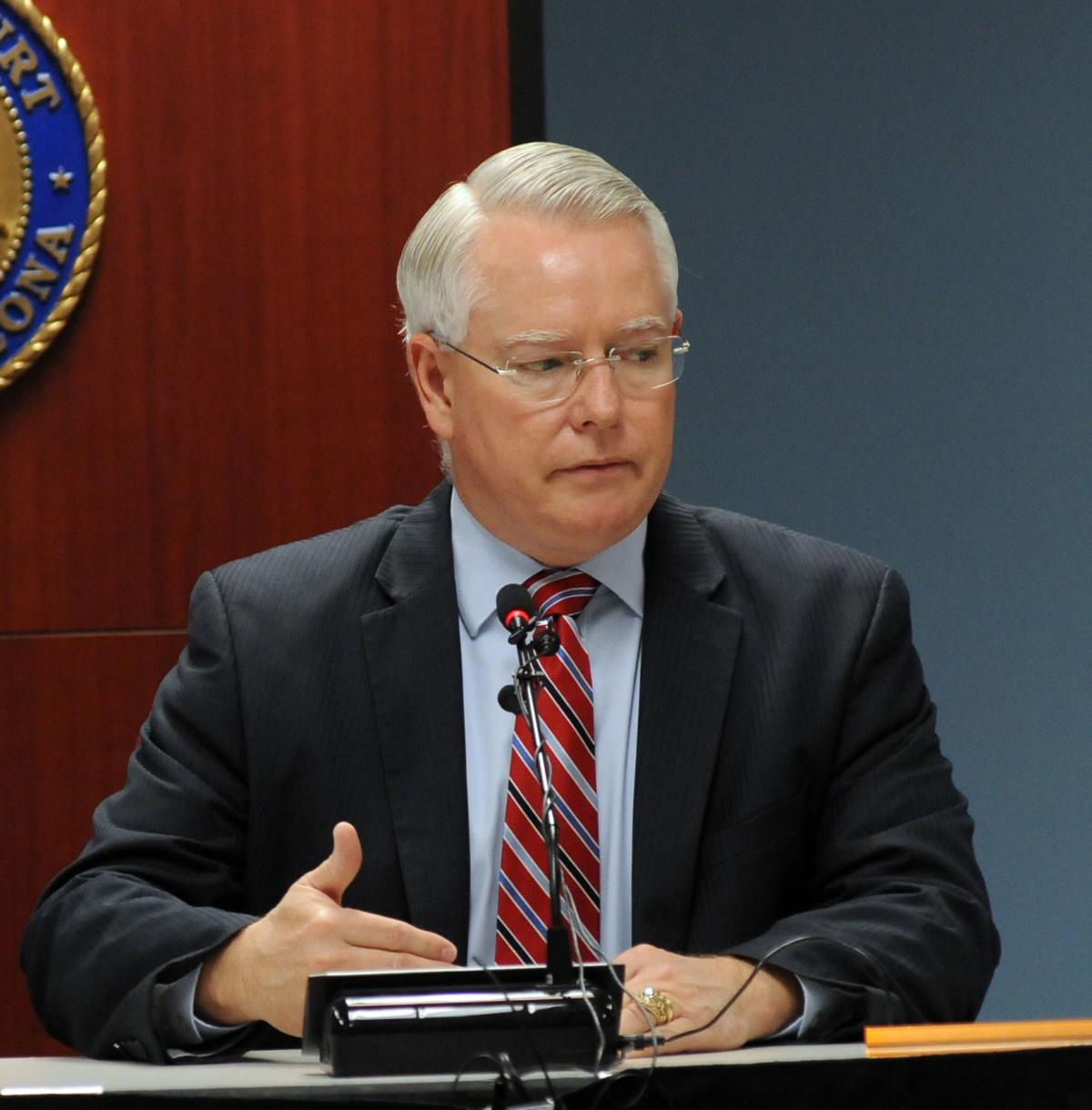 Bill Montgomery, once Maricopa County attorney, now a state Supreme Court justice. He was sworn in behind closed doors Friday.

Smash-and-grab robbers usually don’t invite the press to watch them count their loot.

Last week Ducey completed his heist of Arizona’s judiciary by appointing Montgomery, the Maricopa County attorney, to the seat opened up by the retirement of Chief Justice Scott Bales.

In doing so, he turned the court and the system for picking justices from intentionally apolitical and admired into partisan institutions likely to serve the governor’s political purposes.

The court itself has virtually become the judicial arm of the Arizona Republican Party, fortified to forestall Democratic political advances in the state.

Six of the current seven justices are Republicans, and the seventh might as well be one. Justice Clint Bolick is a registered independent and tends more libertarian in his views than the social conservative Montgomery, but he has been outspoken politically for decades and is clearly in the Ducey camp.

The political takeover of the court began in 2016, when Bales, a moderate Democrat with an apolitical reputation, went to the state Legislature asking for increased funding for the state’s judiciary, including increased pay for judges.

Legislative Republicans told him he could have the funding, as long as he would accept their plan to add two seats to the five-member Supreme Court and let Ducey appoint them.

In other words, pay raises were contingent on court-packing.

Bales balked. He told the legislators the court didn’t really need any more members, as caseloads had been manageable. The legislators told him that was their offer. Bales buckled.

Ducey, who had already appointed Bolick, then got to appoint Andrew Gould and John Lopez IV, both Republicans, to the court. Since then, John Pelander, a Republican and the last remaining Pima County resident on the court, has retired, and Ducey appointed James Beene, another Republican, to replace him. Now, Bales has been replaced by Montgomery.

In Bolick and Montgomery, Ducey appointed two attorneys with no prior judicial experience but lots of experience as political actors.

But the makeup of the court is only part of the story. The other part is the makeup and performance of the little-known body that gives the governor a list of candidates to choose from: the Commission on Appellate Court Appointments.

Voters approved this merit system for selecting judges in November 1974, replacing the election of judges with panels who choose finalists picked from by the governor.

It took judges out of the dirty business of campaigning and allowed an independent, multi-partisan group to select the best candidates.

I spoke Friday with one of the original commission members, Burr Udall, who is the brother of the late Mo and Stewart Udall. At 90, he still goes into the office at his firm on East Broadway and does legal work.

He remembers the early years of the commission as virtuous.

“Politics never had anything to do with it. It was the best qualified of whoever applied,” said Udall, a Democrat appointed in 1975. “There was always someone on the commission who was a friend of the governor and would say ‘The governor wants so-and-so.’ We’d say, ‘Who cares?’”

A more recent member of the commission, Tucson attorney Ted Schmidt, told me politicization has “turned merit selection on its head.”

“We’re no longer operating in good faith to try to do what’s in the best interests of this state,” said Schmidt, who was a Republican when he served on the commission from 2010 to 2015 but now is an independent.

The major fault he and other Ducey critics have pointed to is the membership of the 16-member commission.

The constitutional provision passed in 1974 says “The makeup of the committee shall, to the extent feasible, reflect the diversity of the population of the state” and it lays out restrictions on the number of attorneys, non-attorneys and people from any given county or party.

Until now, governors have taken that requirement to mean they should have a mix of party members, among other demographic categories.

But as it is now, under Ducey, the commission has no Democrats. Not one, although they make up 31% of Arizona voters.

And this year, the membership shifted in crucial ways, between the sessions dedicated to replacing Pelander, and those for replacing Bales.

Both times, Montgomery applied for nomination to the court, but the first time he was not included on the list of finalists that Ducey could nominate.

After that, Ducey took advantage of his opportunity to replace commission members, installing new ones who supported Montgomery’s candidacy.

That did the trick. The second time, Montgomery’s name was forwarded to Ducey on the list of finalists, and the governor made the predictable pick.

One of the newcomers appointed by Ducey is Tucsonan Kathryn Townsend, who said something in a public meeting of the commission that made her a bit infamous.

She said many of Montgomery’s critics “don’t like him because he’s a conservative, white, Christian, cisgendered heterosexual male.”

Townsend approved of him as a finalist. When I spoke with her Friday, she said her words had been misunderstood.

What she meant is that nobody should concern themselves with an applicant’s sexuality, race, religion, gender and the like, whether the person is a member of a traditionally marginalized group or not.

“If you’re going to not consider those things, then you shouldn’t consider them,” she said. “The commission should make decisions based on character.”

While Townsend is a registered independent, and she says that is her true political orientation, she has previously been a GOP precinct committeeman and donor. She told me she has also donated to Democrats in California.

Another newcomer to the commission since Montgomery’s rejection this spring was Tucson-area resident Laura Ciscomani.

Sen. Martin Quezada voted against all of them. He’s made protest votes against every commission appointee for five years, the Phoenix Democrat told me, because they haven’t reflected Arizona’s diversity, in his view.

Increasingly, he said, what they represent is “a long-term game plan” to alter the state’s judiciary in a way that favors Republicans.

The issue is not just the courts. The same commission that vets Supreme Court applicants also chooses the members of the Independent Redistricting Commission, which decides the state’s congressional and legislative districts.

The individual membership of that five-member body (two Democrats, two Republicans and one independent are required) can dictate the partisan makeup of the Legislature and congressional delegation.

So by manipulating the membership of the Commission on Appellate Court Appointments, Ducey is potentially protecting Republican seats and policy priorities through redistricting, as well as court decisions.

There’s nothing much we can do about it, but the Supreme Court justices must stand for retention elections two years after being appointed, then every six years after that. I intend to vote “no” in 2021.

And shaming seems to be having a small effect already. Ducey broke with his previous practice by holding a private swearing-in of Montgomery.

Hank Stephenson, a former Arizona Daily Star reporter who edits the Yellow Sheet Report, said that after the ceremony, Montgomery left the executive building via a private exit and sped off in his car.

Ducey picks Montgomery for Supreme Court over objections of some groups

What happens during the next round of redistricting in Arizona could hinge on the 10th congressional seat.

Gov. Doug Ducey has reshaped the state Supreme Court by manipulating membership of the Commission on Appellate Appointments.

Bill Montgomery, once Maricopa County attorney, now a state Supreme Court justice. He was sworn in behind closed doors Friday.