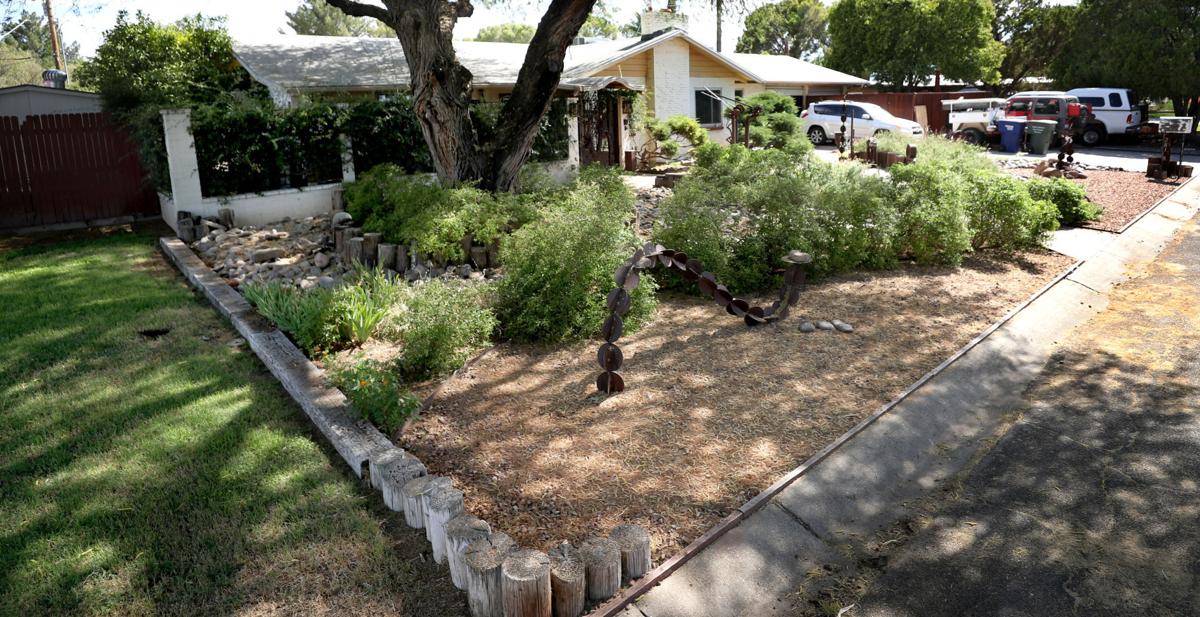 The letters sound like a message from the mid-20th century: They demand that residents of a well-known Tucson neighborhood grow green grass in their front yard or risk fines.

But they are indeed dispatches from 2019.

“This letter is to indicate that your property at (address) is out of compliance with the Neighborhood Design Standards, Section 9,” reads one letter dated June 18. “Specifically, the lawn needs consistent water and weed removal.”

This letter, from the Winterhaven Board of Directors, was written on the stationery of the Winterhaven Water and Development Company, the tiny water utility that serves the square-mile neighborhood in Tucson by pumping from three wells there.

Winterhaven may be best known for its popular display of Christmas-season lights, but it was established in the 1940s and 1950s as a suburban oasis in the desert, filled with non-native trees and turf.

A governing document called the Winterhaven Neighborhood Standards and Landscaping Guidelines make the desired effect clear: “Winterhaven’s dominant use of green lawns and non-native trees creates a Midwestern environment that is unique in Tucson ... Winterhaven residences are fronted by lawns that extend to the street, blending individual lots together and creating a park-like setting.”

The neighborhood was designed especially to imitate Shaker Heights, Ohio, an iconic Cleveland suburb. Each front yard must be at least 50% covered in turf.

Nowadays that look is maintained by threat of monthly fines. In the Sonoran Desert, unlike Ohio, to maintain such a landscape you need to apply lots of water.

Some Winterhaven residents are sick of the grass requirement. It’s one thing if people want to grow turf to keep up the traditional look of the place, they figure. It’s another thing if that look is maintained by force, against the will of some residents and of the desert itself.

The man who received the June 18 letter is Ralph Geror, of East Kleindale Road, who has lived in the neighborhood more than 30 years and told me the association used to be more forgiving.

“For years and years and years, green weeds, as long as it was mowed, they didn’t care about,” he said. But for a few years, he added, “They’ve been running roughshod on members of the neighborhood.”

The woman who chairs Winterhaven’s landscape committee and is in charge of monitoring the greenery is Kim Birmingham. She declined to comment when we talked Friday, deferring to board chair Mary Bouley, who I could not reach in repeated attempts last week.

While Geror was the most recent recipient of the landscape committee’s wrath, he is not the only one.

Titus Purdin, who lives down the road from Geror, showed me documents from last summer. On May 21, he was warned that on his corner lot, “the grass and trees are severely underwatered.” So he watered them.

Then, on Aug. 1, he received a letter from the water company warning him that he had used well over the amount each residence is provided for a flat fee every month, 40,000 gallons. He was potentially subject to a $200 surcharge for using 72,637 gallons, though it was just a warning.

Still, neither Purdin nor Geror is the true adversary of Birmingham and those wishing to maintain the neighborhood’s aquifer-drenched lawns.

That person would be David Furrey, who first clued me in to the neighborhood’s lawn requirement more than a year ago.

Furrey, who also lives down the road from Geror, has been battling Winterhaven over its water use for more than 35 years. In fact, Tony Davis, my colleague at the Star for 22 years, described Furrey in a 1984 story for the Tucson Citizen as “a perennial thorn in the side of Winterhaven’s greenery.” That thorn remains sharp.

Back in 1984, Furrey stopped paying the water bill charged by the Winterhaven company, protesting its lack of water meters at the time, and the area’s broad overuse of water.

Instead, after installing a meter himself, he paid what he estimated he would have been charged by Tucson Water.

The Winterhaven utility eventually shut off his water, and a lawsuit ended with Furrey losing and being forced to pay the flat water fee charged by Winterhaven.

Furrey, who worked as general manager of the Flowing Wells Irrigation District, tore out his lawn back then and managed to maintain his grass-free front yard.

Instead, his yard features metal work, trees and a lot of greenery, but much of it potted rather than in the ground.

“I don’t think they should be requiring people to have all the grass, which equates to the use of water,” he said. “It goes against any kind of conservation ethic.”

Furrey has allied with other Winterhaven neighbors who feel similarly and who have fought the powers-that-be over other issues.

Jill Hawkins and Kirsty MacCalman live next door to Geror and this year had to replace their front-yard turf to comply at a cost of about $1,200, Hawkins said.

They would prefer to let the grass naturally go away in the shade of their arborvitae trees, and put down wood chips and bushes instead. That would put them below 50% turf.

Of course, there are plenty of fans of the grass in Winterhaven. One of them, it happens, is Ray Brice, who lives next door to Furrey.

Brice pointed out to me, when I visited last week, the cooling properties of the neighborhood’s grass and trees.

In fact, a 1994 story in the Arizona Daily Star described a University of Arizona study, which showed the neighborhood’s trees and grass led to temperatures 2-3 cooler in Winterhaven than in adjacent neighborhoods.

There is another, more surprising trade-off for Winterhaven’s grass. Brice helped lead the neighborhood’s 2005 acceptance onto the National Register of Historic Places. Of the 268 properties in Winterhaven, 196 are “contributing properties.”

What qualified Winterhaven was its ranch-style housing and its park-like landscape. In fact, Brice told me, qualifying properties that go below 50% turf in their front yards risk losing their historic designation.

So it’s not just the founding tradition of Winterhaven that is keeping its front yards green with turf — the historic designation is, too.

In the unlikely scenario that 60-some homeowners were to remove their grass, the number of qualifying properties could drop below 50% of the neighborhood and the historic designation could be lost, Brice told me.

None of this figures much in the considerations of those who chafe against turf. They don’t like to be told to spray invaluable desert groundwater on their front yards or face fines.

In the broad scheme, Winterhaven’s water use has only a marginal impact region-wide. The area’s farms and mines are the real drivers of water use.

But the rules rob people of their individual right to raise desert plants and rip out grass, and they also require pumping of groundwater from the aquifer that we all share in the Tucson basin, far beyond the bounds of Winterhaven.

That seems like a rather 20th-century way of treating water.

Letter: Re: the July 7. article “Tim Steller's opinion: In one Tucson neighborhood, residents must grow green grass or pay”