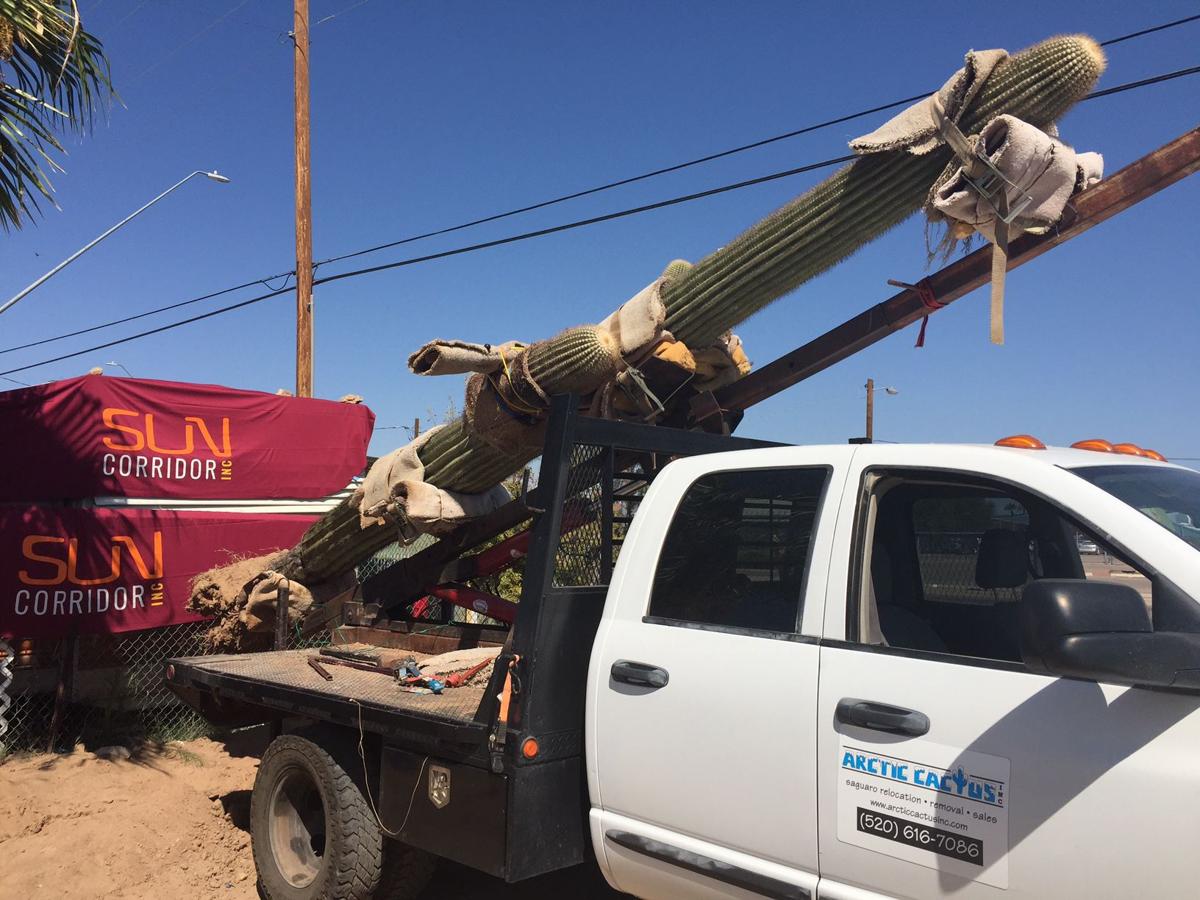 Sun Corridor Inc, the Tucson area’s economic development group, hung banners from a neighboring, abandoned trailer Wednesday when it announced a plan to send a saguaro to Amazon headquarters in Seattle. The saguaro had not left yet Thursday. The trailer was the subject of an eviction order dated July 24. 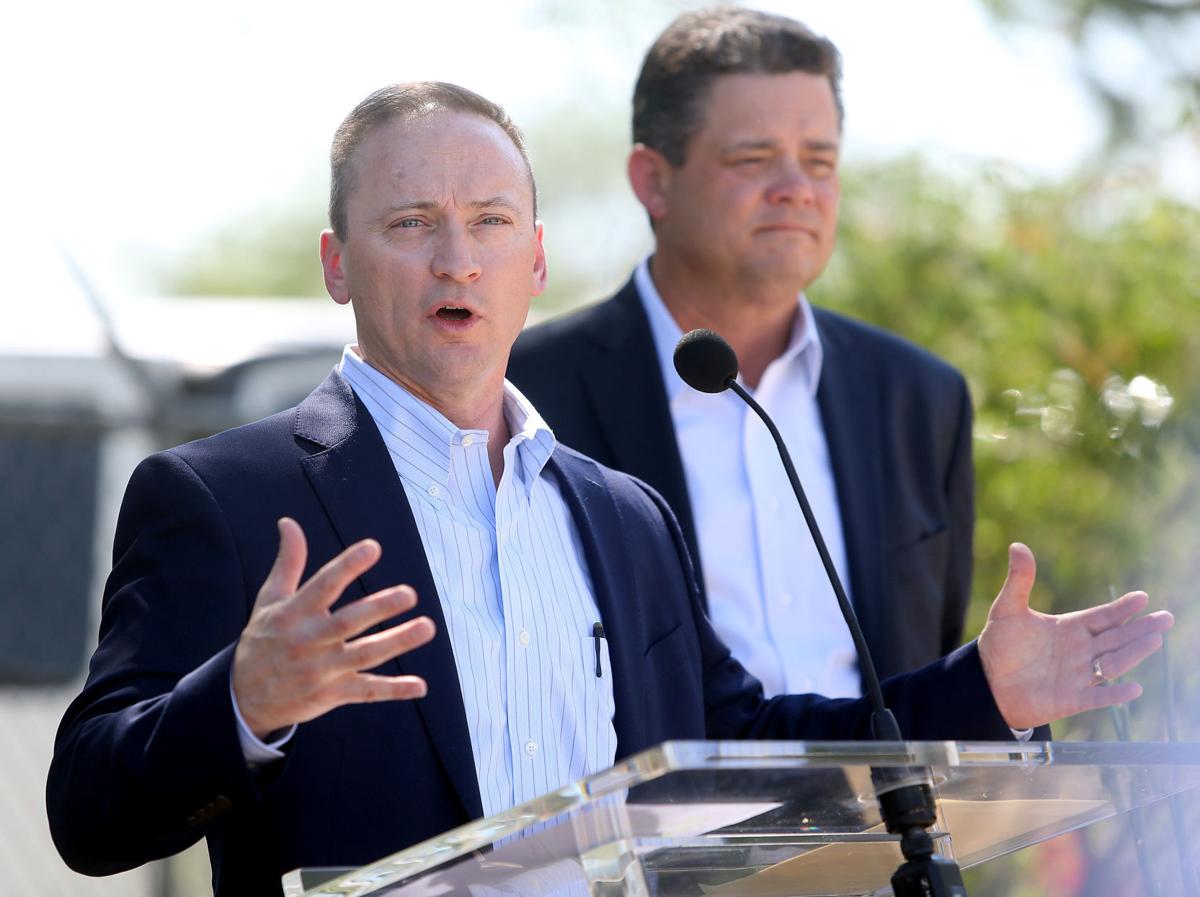 The symbol of Tucson that local officials wanted Jeff Bezos to see was right there before us at a press conference Wednesday.

It was a striking Southern Arizona saguaro, 21-feet tall, destined for Seattle in an effort to catch the Amazon CEO's attention and make him want to put the company's new headquarters here.

But behind the saguaro, covered in banners with the name of Sun Corridor Inc., was another symbol of Tucson. It's not one that anyone wants the outside world to see, but it represents today's Tucson pretty accurately.

The signs for the Tucson area's economic development agency hung on the end of a battered, abandoned trailer, which sits at the front of the Flamingo Palms Mobile Home Park on West Prince Road. The trailer has a July 24 eviction notice posted on its side.

It's normal for there to be a contrast between what we aspire to and what we are — a metro area with a 19 percent poverty rate that ranks us among the poorest cities. And yet, the inevitability of there being an old abandoned trailer behind the set of our sales pitch to Amazon made me think: We're really overreaching when we try to land that headquarters.

The Amazon headquarters project, dubbed HQ2 because it will be the company's second central office after Seattle, is the country's biggest economic development prize in decades, as Joe Snell, the CEO of Sun Corridor, pointed out Wednesday. Over 15 years, as many as 50,000 people will work there at salaries averaging more than $100,000, the company says.

It will likely transform the economy of whatever city it lands in. No wonder Snell and Tucson Electric Power CEO David Hutchens could not resist pursuing it.

But of course Amazon has criteria for its HQ2, and we barely meet them, if we do at all. For one, the metropolitan population is supposed to be at least 1 million, and according to the University of Arizona, Tucson's was 1,013,103 at the end of 2016.

For another, Amazon refers to wanting to locate in a "stable business climate for growth and innovation." The New York Times, which analyzed Amazon's criteria and came up with a likely winner — Denver — eliminated Tucson and a couple of other dozen cities because of our weak job growth. The article singled out Tucson and Birmingham, Alabama as actually having lost jobs over the last decade.

Finally, among our flaws, we do not have two regular flights that Amazon demands — nonstops to New York and Washington, D.C. And really, we can't even argue that we might sustain such flights because we have had them and lost them in recent years.

This isn't to say Tucson is a bad place or an unworkable choice for Amazon. It's just to say they're out of our league — we're in Triple A and they're in the majors.

Economic development officials have repeatedly noted that we impressed the Tesla site selectors, though obviously we didn't win that project. But the Tesla project had criteria that benefited Tucson more.

For Amazon, we have land, we have a good cluster of logistical businesses, we have a strong university from which the company could draw talent. Good weather. Great mountains. And yes, we have saguaros.

On Thursday, the one that is supposed to go to Seattle was still sitting at the site of the Arctic Cactus nursery where the press conference was held Wednesday. For the sake of that saguaro, we should hope the whole trip falls through. It won't survive outdoors in Seattle, of course, nor would it likely survive in the indoor terraria that Amazon has built in downtown Seattle.

It's a creative publicity stunt, of course. But it can't cover up our shortcomings — the same way those banners couldn't cover up the abandoned trailer.

Stegeman’s ‘no’ votes proved to be on target

Re: the Aug. 25 column “TUSD’s Stegeman finds another reason to vote ‘no.’”

The 21-foot cactus will stay put in the Sonoran Desert.

Sun Corridor Inc, the Tucson area’s economic development group, hung banners from a neighboring, abandoned trailer Wednesday when it announced a plan to send a saguaro to Amazon headquarters in Seattle. The saguaro had not left yet Thursday. The trailer was the subject of an eviction order dated July 24.