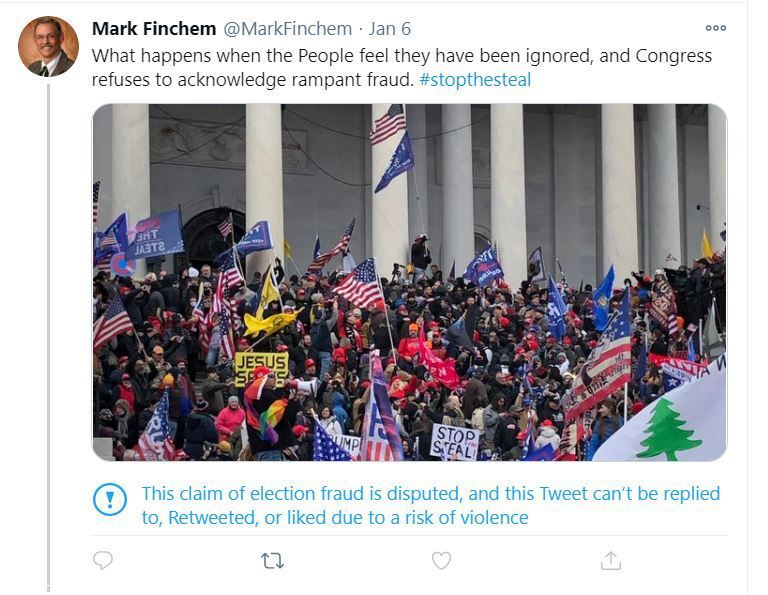 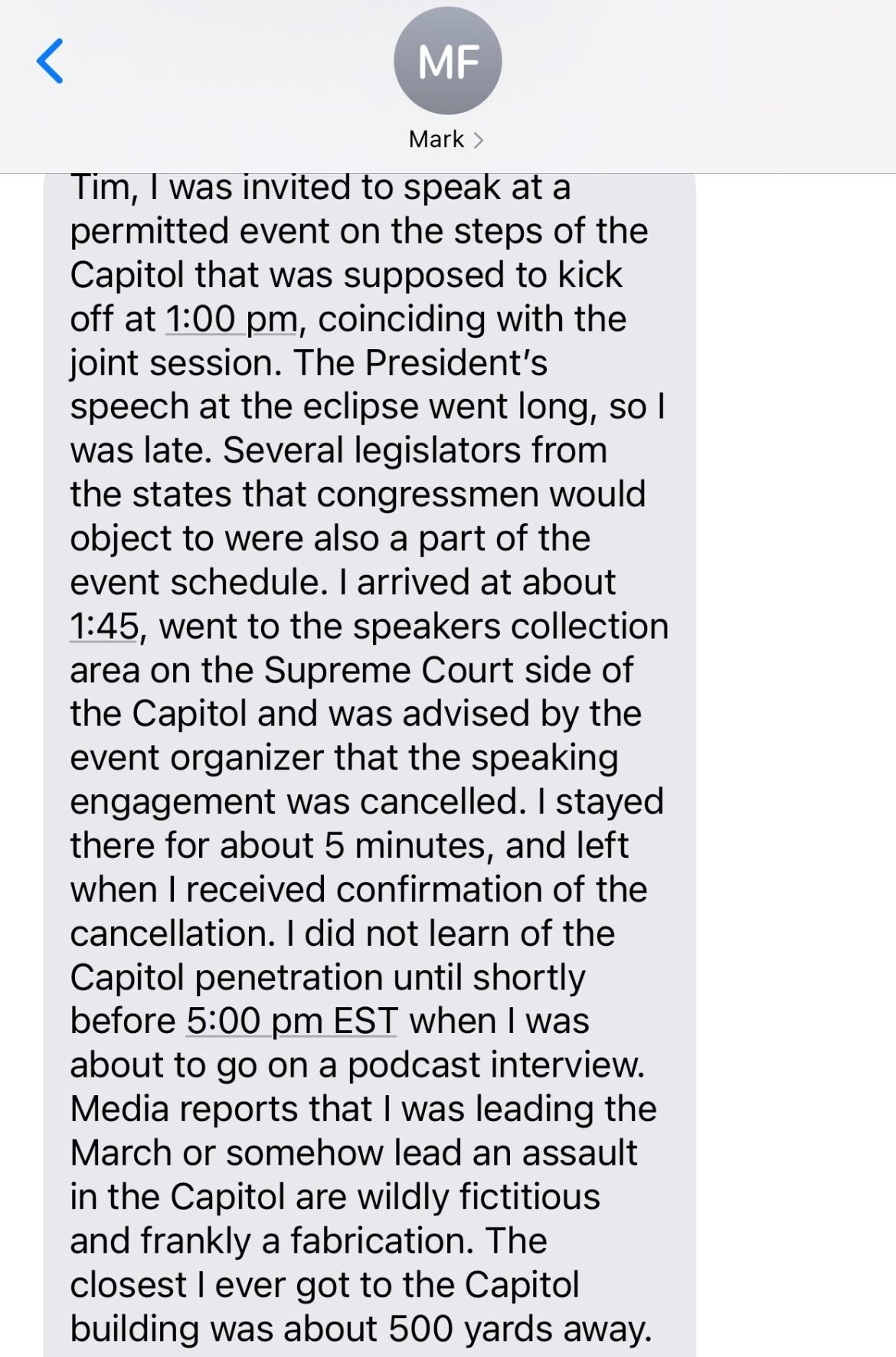 In a text sent to columnist Tim Steller on Saturday, Jan 9 2021 at about 6 p.m., Rep. Mark Finchem said he only briefly visited the rally in D.C. that turned into a violent riot when people entered the U.S. Capitol. 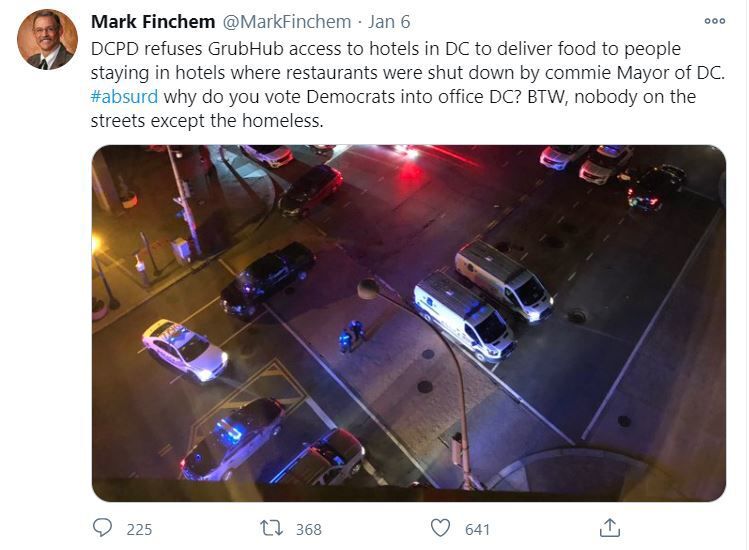 The night of Jan. 6, Rep. Mark Finchem had nothing to say on Twitter about the violence at the U.S. Capitol. He complained about not being able to get food delivered to his D.C. hotel room after the 6 p.m. curfew.

On Jan. 8, Rep. Mark Finchem compared his loss of followers on Twitter to repression and forced labor in the Soviet Union. 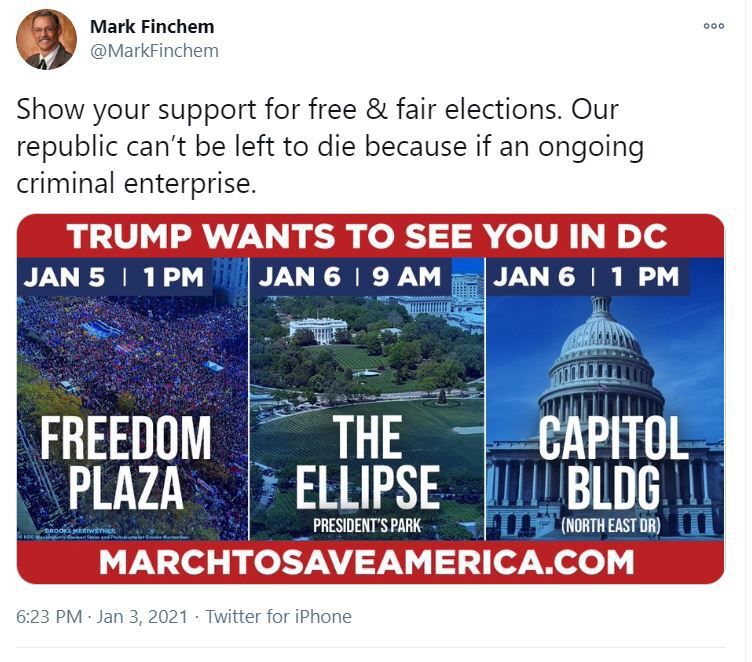 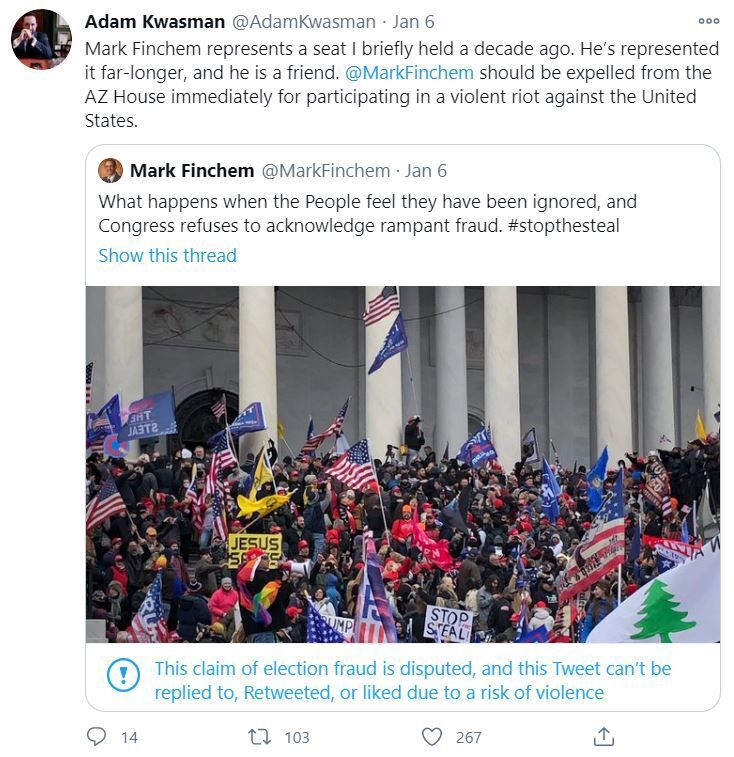 On Jan.  6, after the insurrection at the U.S. Capitol attended by Rep. Mark Finchem, his Republican predecessor Adam Kwasman said Finchem should be removed from the Legislature.

This time, we can’t avert our eyes and shake our heads.

For years, Rep. Mark Finchem, the Oro Valley Republican, has allied with militant groups and postured as a freedom fighter against government tyranny.

When he came into office in 2015 he was a member of the Oath Keepers, a right-wing militant group.

In office, he became Arizona coordinator of the Coalition of Western States — a network that supported the occupation of a wildlife refuge in Oregon and was led by a Washington legislator so extreme that his Legislature accused him of participating in domestic terrorism.

Throughout Finchem’s legislative career he’s pushed conspiracy theories, too. Like the one about Hezbollah using training camps in northern Mexico to join with La Raza activists and Muslim student associations to attack Southern Arizona.

That was laughable. This isn’t.

For weeks, Finchem has been conspiring to disenfranchise you, me and every other Arizona voter by claiming electoral fraud occurred and justifies the Legislature picking the state’s presidential electors — Trump’s electors, in case you had any doubt.

Last week, Finchem topped that by promoting and attending the Jan. 6 insurrection against the U.S. government and Constitution in Washington, D.C.

Finchem, a retired Kalamazoo, Michigan, police officer, claims not to have participated in any of the property damage or violence, but at this stage, it doesn’t really matter. He should resign.

I have no reason to think he would, though. Finchem seems completely convinced of his delusions, as is the movement he belongs to. Barring resignation, he should be removed from office in whatever way is legally possible.

It’s not just me, an anti-Trump columnist, saying this. Here’s what Adam Kwasman, the conservative Republican who held the Legislative District 11 seat before Finchem, said this week on Twitter: Mark Finchem “should be expelled from the AZ House immediately for participating in a violent riot against the United States.”

On social media, Finchem said he had not gone into the Capitol. In a text message sent about 6 p.m. Saturday, he said he arrived at the Capitol at about 1:45 p.m. Wednesday for a speaking engagement, which ended up being cancelled. Then he left, Finchem said, never getting closer than about 500 yards to the Capitol and learning of the violence about 5 p.m.

On social media, he ridiculously blamed the violence on “Antifa.”

I say ridiculously, because many of the rioters either posted their exploits on social media or were arrested and identified later. Long social-media histories showed they were Trump supporters, not leftists posing as MAGA enthusiasts.

When I talked with him Friday, Kwasman, now an attorney in Phoenix, was unapologetic about his call for Finchem’s expulsion.

Finchem, he said, “whether or not he crossed the barricade into the sanctum of the Capitol, participated openly in inciting subversion against our democracy and the federal government. That’s a violation of the oath of office any state legislator takes.”

Since the Nov. 3 election, Finchem has been eagerly amplifying whatever election-fraud conspiracy theory has come along. He held a public meeting Nov. 30 at which Trump supporters claiming to be experts concluded the president had been robbed. Trump himself called in to the meeting.

Since then, he’s gained some fame and been feeding on the attention.This past week, here’s what Finchem has said publicly on social media about what he did.

On Jan. 3, Finchem posted on Twitter a promotion for the Wednesday event. He wrote, “Show your support for free & fair elections. Our republic can’t be left to die because if [sic] an ongoing criminal enterprise.”

On Jan. 4, Finchem celebrated the fact that President Trump read a letter from him at a rally in Georgia for the GOP Senate candidates, both of whom have since conceded they lost.

On Jan. 6, Finchem was in Washington, D.C. At 1:16 p.m. Eastern time, he posted a picture of a large group on the Capitol steps waving Trump flags. His comment: “What happens when the People feel they have been ignored, and Congress refuses to acknowledge rampant fraud. #stopthesteal”

Within about an hour, the crowd was breaking into the Capitol. Soon after, the congressional process of confirming the presidential winner was suspended, and people began losing their lives — five eventually died. What exactly he did during that time remains unclear, but there's no evidence he entered the Capitol or joined the riot.

That night, Finchem was not the slightest bit regretful on social media about the violence and destruction. He retweeted messages by President Trump and a photo of the Trump supporter who was shot and killed by police in the Capitol. At 7:48 p.m. he complained about the difficulty of getting food in D.C., where a curfew went into effect at 6 p.m.

“DCPD refuses GrubHub access to hotels in DC to deliver food to people staying in hotels where restaurants were shut down by commie Mayor of DC,” he tweeted.

As the week has gone on, he’s complained about the fact that he is losing followers on Twitter, which he sees as a sign the platform is deliberately sabotaging him.

In a tweet about that on Friday, Finchem said “welcome to Soviet America.” He also wondered “where is the gulag in America?”

Yes, Finchem compared the loss of some followers, possibly the automated accounts called bots that Twitter constantly culls, to deadly forced labor in Siberian prison camps. As is common in the movement he belongs to, Finchem’s sense of persecution is entirely divorced from the comfortable reality he lives in.

One person that this retired police officer never mentioned in his social-media feed is Brian Sicknick, the Capitol Police officer killed in the insurrection Finchem helped foment. He appears to have glossed over that incident.

I would love for all this to mean that the House considers expelling Finchem when it resumes Monday. But that is unlikely, at least at first. House Speaker Russell Bowers is set to be voted back into his position as speaker Monday, but only if the 31 Republicans stick together.

Finchem, who won re-election by 3.5 percentage points in November, ran against Bowers for speaker and lost. His seatmate, Bret Roberts, has threatened not to vote for Bowers, potentially robbing the speaker of his majority. If any more Republicans stray, Bowers’ position could be threatened.

That doesn’t mean nothing can or should be done. A censure by the House is a no-brainer and hardly merits mentioning. Expulsion should be considered.

In the case of Matt Shea, the founder of the Coalition of Western States who calls Finchem a “friend” on social media, the Washington Legislature hired an outside firm to investigate him. They found he had participated in “domestic terrorism,” and the Republican caucus removed him from the caucus as well as all committee assignments.

But the cleanest remedy of all for a democratically elected legislator who wants to overturn democracy is recall.

I learned Friday that voters in Legislative District 11 are beginning to pursue a recall. That can't happen soon enough or to a more deserving extremist.

Pima County Democrats and Republicans have chosen new leadership; Rep. Bret Roberts changed his tune in the House speaker's race; and Rep. Mark Finchem is facing two formal efforts against him after attending the Jan. 6 rally in D.C.

The insurrection at the U.S. Capitol had many left-wingers talking like right-wingers, and vice versa. When it comes to mass mobilizations, and political violence, we ought to agree to some bedrock principles: Non-violence and the rule of law would be a good start.

In a text sent to columnist Tim Steller on Saturday, Jan 9 2021 at about 6 p.m., Rep. Mark Finchem said he only briefly visited the rally in D.C. that turned into a violent riot when people entered the U.S. Capitol.

The night of Jan. 6, Rep. Mark Finchem had nothing to say on Twitter about the violence at the U.S. Capitol. He complained about not being able to get food delivered to his D.C. hotel room after the 6 p.m. curfew.

On Jan. 8, Rep. Mark Finchem compared his loss of followers on Twitter to repression and forced labor in the Soviet Union.

On Jan.  6, after the insurrection at the U.S. Capitol attended by Rep. Mark Finchem, his Republican predecessor Adam Kwasman said Finchem should be removed from the Legislature. 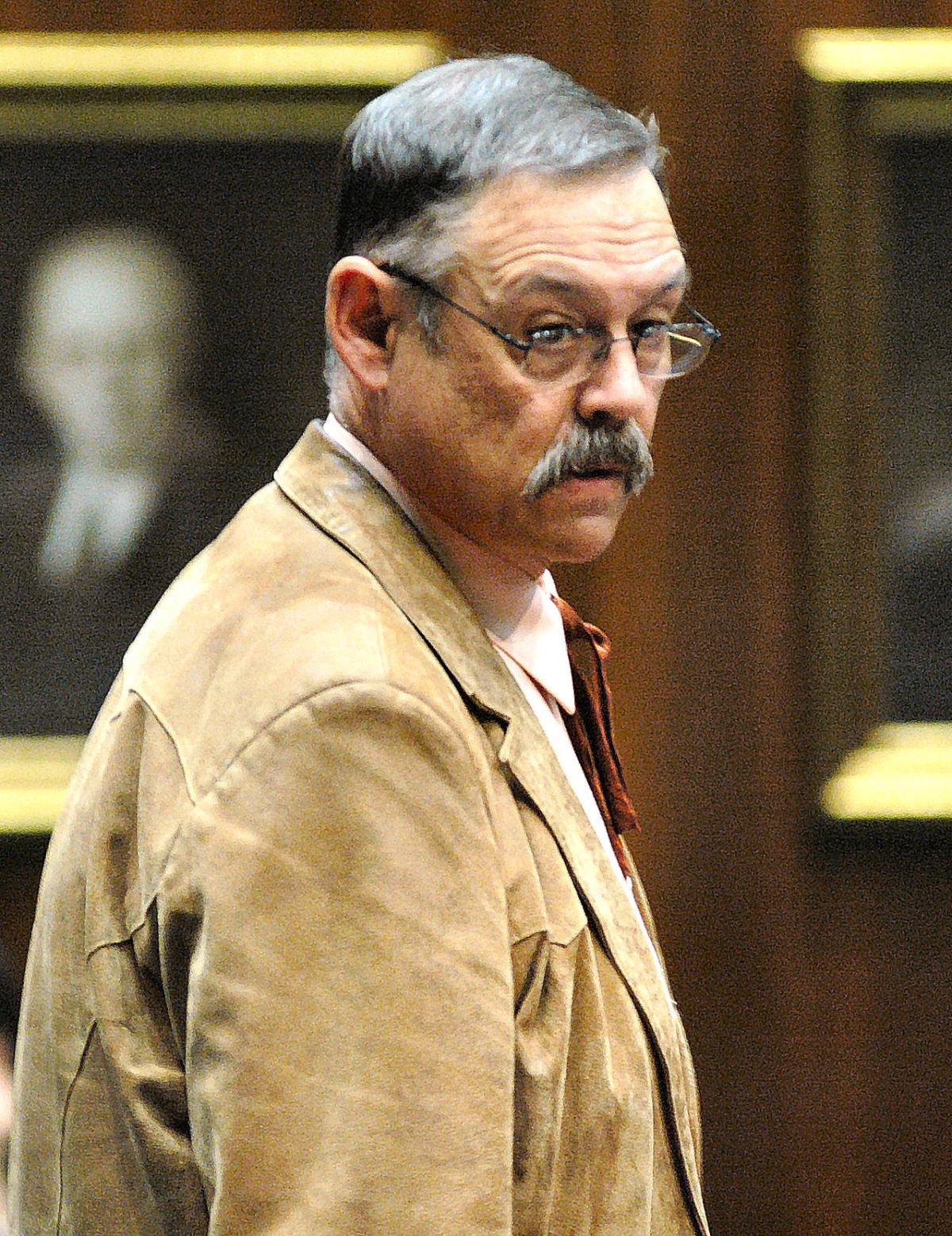