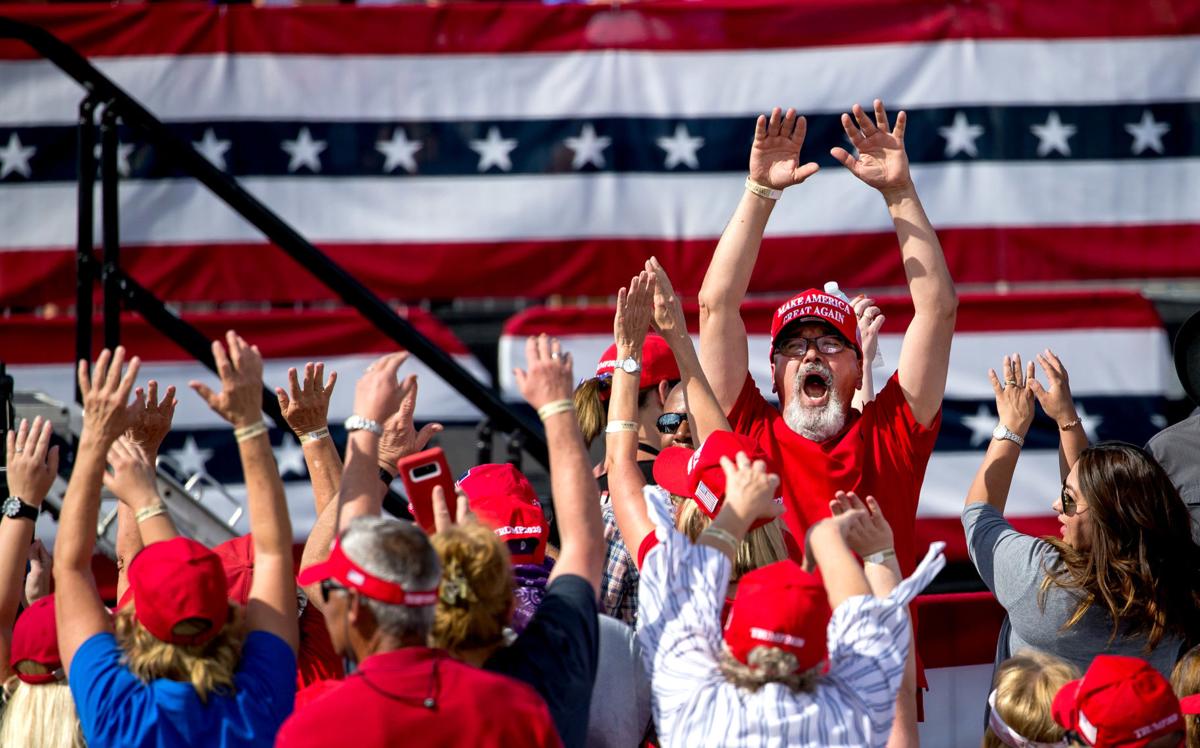 President Trump sent the message Monday, directly and indirectly, that the pandemic is not that big a deal anymore.

After all, he gathered thousands of people for rallies in Prescott and here in Tucson, packed together without even a mask requirement, at a time when infections are rising again.

That said a lot on its own — it flagrantly disregarded public-health guidelines on large gatherings and mask-wearing. He also repeatedly downplayed its seriousness in his comments:

“The pandemic is rounding the turn. Vaccines are coming. And I look fine, don’t I?”

“The vaccine will end the pandemic. But even without the vaccine, the pandemic is ending. It’s going to end.”

It’s nice to feel optimistic, which is the feeling the president tried to communicate about COVID-19 during his Arizona swing. It’s also what the president tried to do from the beginning of the pandemic, as we know from Bob Woodward’s interviews. By trying to avoid panic, he also misled the public, or at least part of it, into thinking the pandemic is not that big a deal.

Yes, “we will get back to normal life,” as the president said.

But not all of us will be there when we arrive. Almost 6,000 Arizonans have died, and thousands more could if we’re not careful.

So it’s best to be, not optimistic nor pessimistic, but realistic.

The president’s rhetoric in Tucson only veered from unrealistic optimism about the coronavirus when it boosted his own record.

“We built the greatest economy ever,” Trump said. “We had to close it down — we saved millions of lives by doing what we did. Then we built it back up.”

“To battle the China virus we launched the largest mobilization since World War II. Our early and aggressive action saved more than 2 million lives.”

In both cases, Trump was referencing worst-case scenarios in which we did nothing to respond to the virus. If we had done nothing, we might have arrived at 2 million or more lives lost in the first year. Instead, we’re at about 221,000 in the United States — a huge number on its own.

Beating the “do-nothing” option is really a low threshold for success. On the issue of masks, for example, Trump has repeatedly sent mixed messages. He told gathered reporters Monday in Prescott: “I’m OK with masks. I like it. I think it’s good. A lot of people like it.”

But then he rarely ever wears them and does not require them even at his ill-advised mass rallies, including Monday’s in Tucson, where the crowd was largely maskless.

A recent Centers for Disease Control study on Arizona showed how the state’s COVID-19 cases spiked after emergency measures were lifted in mid-May, then dropped sharply after cities and counties started imposing mask requirements in mid-late June.

Before that improvement, we had scary weeks of June and July, when cases surged and our hospitals overflowed. Then after the mask mandates took effect, the positivity rate for diagnostic tests dropped sharply.

We had a manageably low positivity rate of about 4% for five consecutive weeks, from late August to early October. But then the rate rose to 6% the second week of October and 8% the third week.

The “Rt,” a measure of effective spread that the governor’s office frequently cited in July and August when it was low, has risen in Arizona to about 1.10, meaning the spread is accelerating here now.

Pima County and Yavapai County, where Prescott is located, have been two of Arizona’s better performing counties recently. We’ll be lucky if they stay that way after the president’s irresponsibly optimistic rallies.

During his rallies, Trump repeatedly encouraged people to vote for Sen. Martha McSally, who is facing a tough election challenge by Democrat Mark Kelly.

And he referred to the former fighter pilot as “honey” and “darling.” Ouch.

“We’re not going to take her time or anything, but Martha McSally is here,” Trump said, as if McSally had something else to do while he was on stage.

The comment was a slight to McSally, who defeated Ward in 2018 to win the Republican nomination. McSally went on to lose the general election to Democrat Kyrsten Sinema. He was also probably wrong — it’s unlikely Ward would have done better than McSally against Sinema. (After McSally’s loss, Ducey appointed her to Arizona’s other Senate seat after John McCain died.)

Perhaps Trump is seeing the polls that show McSally losing to Kelly and preemptively distancing himself. Or maybe he didn’t like it when McSally wouldn’t answer directly a question about whether she was proud of her support for Trump during a senatorial debate.

Ducey, on the other hand, has embraced Trump as tightly as any Arizona elected official.

He was practically shouting when Trump invited him to the microphone in Tucson.

The crowd of Trump supporters might not have been so supportive of Ducey as he was of Trump. The audio of the event picked up a smattering of what sounded like boos when Trump introduced him, and Trump seemed to acknowledge that.

It would not be surprising if there were some boos — some Republicans have criticized Ducey for his use of executive authorities in response to the pandemic.

This year may come to be remembered as the moment the great American road trip made its comeback. Amid the COVID-19 pandemic, more people are …

New COVID-19 cases are increasing in Arizona, but not as rapidly as in other states. Case counts in Pima County are in better shape than the statewide average.

A coalition of groups across the U.S.-Mexico border held coordinated demonstrations, demanding a resumption of processing asylum requests. About 100 people attended on either side of the border fence in Nogales, Sonora and Arizona.

Tucson's mayor asked that officers be removed from polling places out of concern for voter intimidation. But there's another concern: Partisan political activity within 75 feet of the polling place. Replacing Tucson officers with sheriff's deputies elegantly solves that problem.

Trump pumped up the threat of foreign criminals to win the GOP primary and presidency in 2016. That rhetoric gave him the power to slash legal immigration and impose harsh border-security measures.

One tractor trailer driver showed up at a South Side Tucson polling place to ask if he could vote there, although he lives in Maricopa County. Told no, he hustled his big rig onto  Interstate 10 and hustled north.

The new reality in Pima County is one of single-party rule. Democrats credit President Trump, in part, for their sweep, and say their grip on elections is only growing. It's frustrating to Republicans.