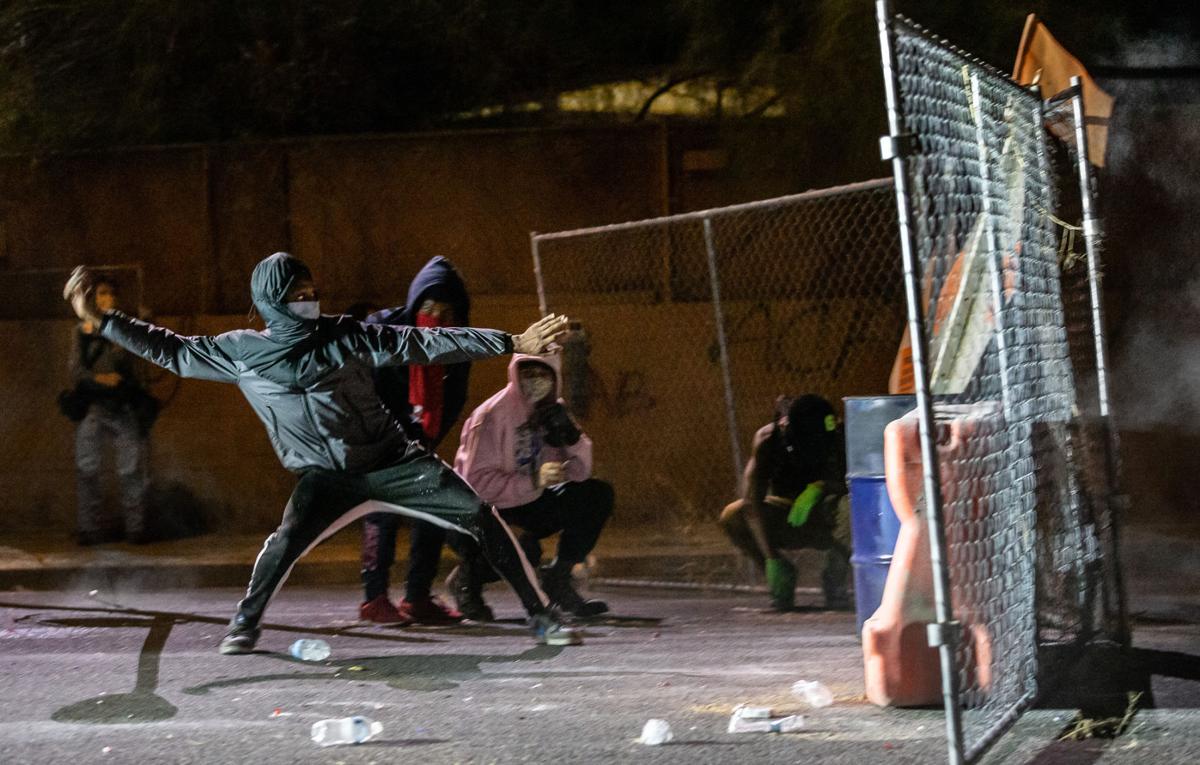 In late May, people vandalized buildings and clashed with police in downtown Tucson. A bill in the Arizona Legislature would create a new crime — “violent or disorderly assembly.”

Left-wingers are condemning attacks on police.

The days since the insurrection of Jan. 6 have given us a head-spinning lesson in situational ethics. Some would say it’s a heyday for hypocrisy.

The situations are different: Last summer’s protests of police violence and this month’s effort to overturn the election. But they do give us a chance to see the flaws in our own thinking and grasp for common rules for mass political action, all at an apt time.

“Recognizing the vital urge that has engulfed the Negro community, one should readily understand public demonstrations,” King wrote in his 1963 Letter from the Birmingham Jail. “The Negro has many pent-up resentments and latent frustrations. He has to get them out.”

“If his repressed emotions do not come out in these nonviolent ways, they will come out in ominous expressions of violence. This is not a threat; it is a fact of history.”

That idea came into full view in May and June of 2020 after the chilling videotaped killing of George Floyd by Minneapolis police officers. Demonstrations proliferated around the country, turning into riots in some cities. Some of the streets where I grew up in Minneapolis burned to the ground.

In Tucson, there were many protests, but the damage was limited to a couple of nights of broken windows and graffiti downtown, though protesters also attacked police and journalists. (I did write a column denouncing crowd violence against journalists.)

Just because the U.S. Capitol rally and some anti-racism demonstrations over the summer both resulted in damage and death, though, it doesn’t mean they were the same thing.

The many protests around the country last summer coalesced around the ideas of fighting racism and holding violent police officers accountable for their violence. A demand to reduce police funding also became prominent as the weeks went on.

The Capitol action on Jan. 6 was singular and different. It was the culmination of a monthslong disinformation campaign, led by the president, claiming electoral fraud. The objective was to disrupt the final step in the constitutional process of confirming the election of Joe Biden.

Many who attended the rally didn’t know it would go as far as it did, and didn’t enter the Capitol — as in the many “mostly peaceful” protests over the summer. But prosecutors have already begun presenting evidence of planning and intent on the part of many attendees.

Some brought zip-tie handcuffs; others had lists of people they wanted to go after. It turns out Vice President Mike Pence, in particular, was in danger of losing his life because he didn’t try to hand the election to Trump. Unlike the multifaceted demonstrations after the Floyd killing, this was a targeted, violent conspiracy to overturn the election results.

There’s also a racial overtone in the differences that shouldn’t go unnoticed. While this summer’s rallies and riots were multiracial, the Capitol attack was the work, largely, of white men.

It carried with it traces of the white mobs of previous generations, going back to the Reconstruction South, attacking elected officials because they were angry that their power and privileges were being undermined. In the South, these ancestral mobs gained them nearly a century more of segregation — which shows how important it is to hold today’s insurrectionists accountable.

Ironically, those arrested in the Capitol may be facing harsher punishments because the president they were trying to support, Donald Trump, issued an order over the summer to punish people who damage monuments and federal property.

“It is the policy of the United States to prosecute to the fullest extent permitted under Federal law, and as appropriate, any person or any entity that destroys, damages, vandalizes, or desecrates a monument, memorial, or statue within the United States or otherwise vandalizes government property,” Trump ordered on June 26.

In Arizona’s Legislature, a similar effort is being made to create new crimes and impose harsher penalties on rioters. Rep. Bret Roberts’ bill, HB 2309, would create a new crime, “violent or disorderly assembly.” People would commit this new felony if they joined at least seven others who were intending to participate in a riot or unlawful assembly and cause damage to property or injury to another person.

The effort clearly derives from last summer’s protests — it is paired with an effort to stop cities from defunding police. But in the current atmosphere, hardcore Trump supporters are more likely to commit it now.

Some Democrats are clamoring for harsh punishments for the insurrectionists, labeling them as “terrorists.” Some may merit such treatment, but people should be careful what they wish for.

Fifteen demonstrators arrested in Phoenix last summer are facing enhanced felony charges because prosecutors pursued them as if they were gang members. The reason? They dressed in black and carried umbrellas.

Nonviolence and rule of law

Now that the different segments of society have seen political violence from each other’s perspectives, maybe we can come to some agreement on ground rules.

For me, nonviolence is bedrock. Over the summer, people justified violence as an expression of rage caused by racism. Maybe for some, but it’s too much to ask of a society or justice system to separate justified feelings of rage from unjustified lust for destruction.

Consider that on Jan. 6, the Capitol insurrectionists also justified their violence as a way for people to overturn a historic injustice — a stolen presidential election. They appeared to sincerely believe that false claim, stoked expertly by the president.

But violence is not a necessary tactic. King showed that nonviolent demonstrations were not submissive acts, even though they were peaceful.

He wrote in the letter, “Nonviolent direct action seeks to create such a crisis and establish such creative tension that a community that has consistently refused to negotiate is forced to confront the issue. It seeks so to dramatize the issue that it can no longer be ignored.”

King was not so worried about breaking the law — he differentiated between “just” and “unjust” laws.

“I was arrested Friday on a charge of parading without a permit,” he wrote. “Now there is nothing wrong with an ordinance which requires a permit for a parade, but when the ordinance is used to preserve segregation and to deny citizens the First Amendment privilege of peaceful assembly and peaceful protest, then it becomes unjust.”

Nevertheless, I think the “rule of law” must be our other bedrock principle, along with nonviolence.

People who broke the same law demonstrating against George Floyd’s killing as people protesting that the election was stolen should be treated the same, under the law. We have to play the politics of mass mobilization under the same rules.

And the rule of law also must be applied not just to the protesting public, but equally to police and to presidents.

No excesses, no excuses.

In his campaigns and presidency, Trump upheld his supporters as the bedrock of the country, a "real America" that had been ignored. They won recognition by putting him in office and now must acknowledge a bigger "real America" that wanted Trump out, Biden in.

House Bill 2309 would create a new crime of "violent or disorderly assembly" in Arizona.

In late May, people vandalized buildings and clashed with police in downtown Tucson. A bill in the Arizona Legislature would create a new crime — “violent or disorderly assembly.”