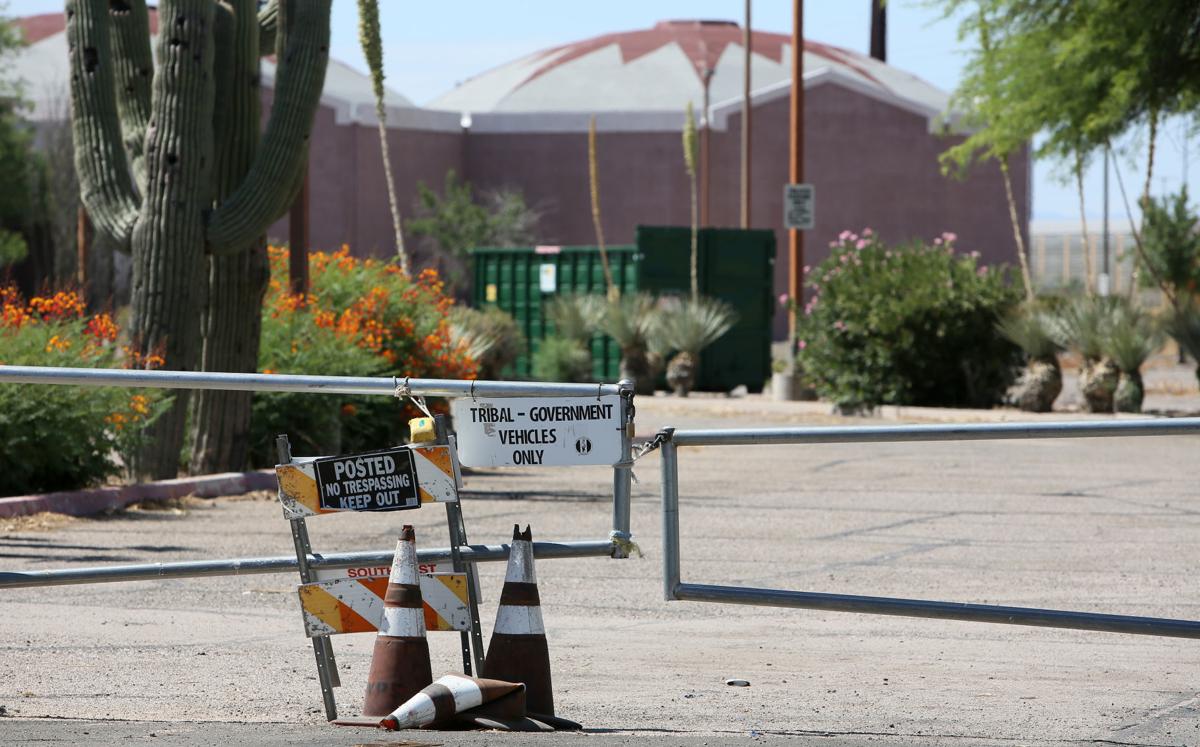 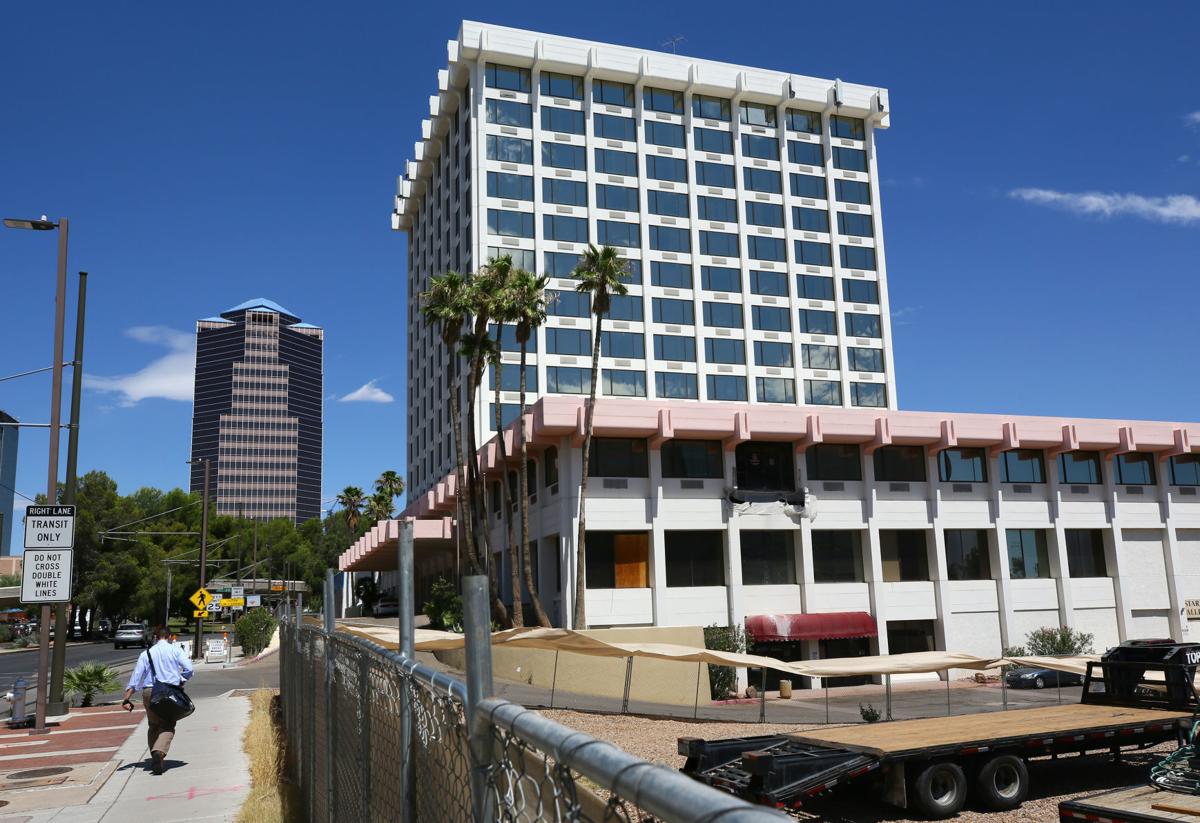 Owners of Hotel Arizona on Congress Street, right, just east of Grande Ave. in downtown Tucson, say they have agreement with Hyatt for a 296-room hotel. One South Church, the tallest building in Tucson, is at left. Photo taken July 7, 2019.

In one case, the city of Tucson is offering tax incentives to help a property owner consummate a big downtown redevelopment project.

In the other case, the city is receiving incentives in the form of a promise it will receive taxes, to help a new owner take over a big commercial property along I-10.

Incentives increasingly make me skeptical, but both of these seem like reasonable ways to boost economic activity at long-unused sites that really need help: the old Hotel Arizona at 181 W. Broadway and the old Century Park 16 movie theater at 1055 W. Grant Road.

That’s true even though the first proposed incentives are for HSL Properties’ white elephant downtown, the former Hotel Arizona, which HSL closed in 2012.

I’ve long argued that HSL’s founder, Humberto Lopez, was playing games with the hotel, leaving it empty as leverage to convince the city to offer him richer incentives than other projects have received.

Indeed, City Council member Steve Kozachik told me that until recently, HSL was asking for a 20-year property-tax abatement as part of any deal to redevelop the hotel. That would be bigger than any other similar deals downtown.

“They were asking for all the taxes to be rolled back into their project, and it could go into their own debt service,” he said. “Everything was extended out for a 20-year time frame,” including what will now be an eight-year property-tax abatement.

But Omar Mireles, Lopez’s nephew, took over as president of HSL in 2015 and may take a more pragmatic view of the property, or at least have less baggage than his uncle did before the Tucson City Council.

So Tuesday, the council unanimously approved taking the first step in approving an incentive package that more or less matches the one the council offered to the AC Marriott hotel, the first hotel to open downtown in the current wave, and other projects. The expected result is a 296-room Hyatt Regency hotel that could serve the Tucson Convention Center well.

As my colleague Gabriela Rico reported, the incentives are:

These incentives have been pretty standard downtown for the last decade and have helped create the commercial renaissance there. On Tuesday, without significant discussion, the council approved an economic analysis of the deal.

“Setting personalities aside, if the numbers work out right, there’s no reason we shouldn’t move forward,” Kozachik told me.

It makes sense to me especially because this is a property Tucson desperately needs to be renovated and reopened. It’s a special case. The next hotel to ask for incentives merits a more skeptical analysis, because at some point these deals should rise or fall on their own, without city incentives.

Now, also Tuesday, the city accepted incentives, of a sort, on the former movie theater property near Grant and I-10. The incentives come in the form of assurances that the Pascua Yaqui Tribe will make tax-like payments to the city, abide by zoning regulations, and consult with the city or public on future development at the site.

The cool thing about this is that it not only represents an opportunity to redevelop a big, unused site, but it’s also at one of Pima County’s oldest Yaqui settlements, Old Pascua.

At the council meeting Tuesday, officials were quick to tamp down expectations — or fears, depending on your perspective — that a casino will be built on the property any time soon. It is simply a possibility, or contingency, that the city and tribal negotiators dealt with in their 23-page intergovernmental agreement.

But even though I’m no big fan of casinos, a gambling center on that site makes a lot of sense to me. It’s only a block or so from the freeway, there’s plenty of parking, and it could spark development in the surrounding commercial area, which is verging on run-down.

There aren’t a lot of residential neighbors, but many who are there are Yaqui tribal members, who presumably have a vote and a say in how the tribe moves forward.

In short, if there’s going to be a casino within Tucson city limits, that’s a pretty good spot for it.

It will take years for the tribe even to get approval for the land to be taken into trust, but when it happens, the groundwork will have been laid for good cooperation with the city.

The tribe offered the city the incentive that it will pay applicable taxes, assurances on how it will proceed with redevelopment, and a way for disagreements to be hashed out.

In both of these places, downtown and at Old Pascua, the incentives seem like a necessary precursor to redevelopment at old, unused sites. Even a skeptic like me has to admit that seems like a good thing.

Tucsonan's are at the point where they need to ask themselves the question: what will become of downtown?

Tucson weather: The storms are a day away

While today will be hotter than yesterday, there are encouraging signs that the monsoon season will finally kick off this week.

Owners of Hotel Arizona on Congress Street, right, just east of Grande Ave. in downtown Tucson, say they have agreement with Hyatt for a 296-room hotel. One South Church, the tallest building in Tucson, is at left. Photo taken July 7, 2019.