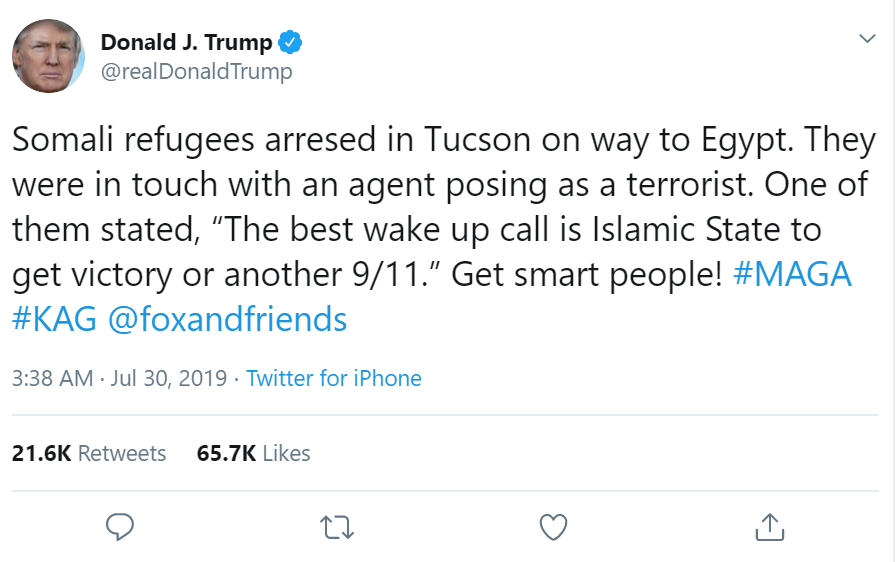 Early on Tuesday, President Trump wrote a tweet about two Somali refugees from Tucson who were arrested. 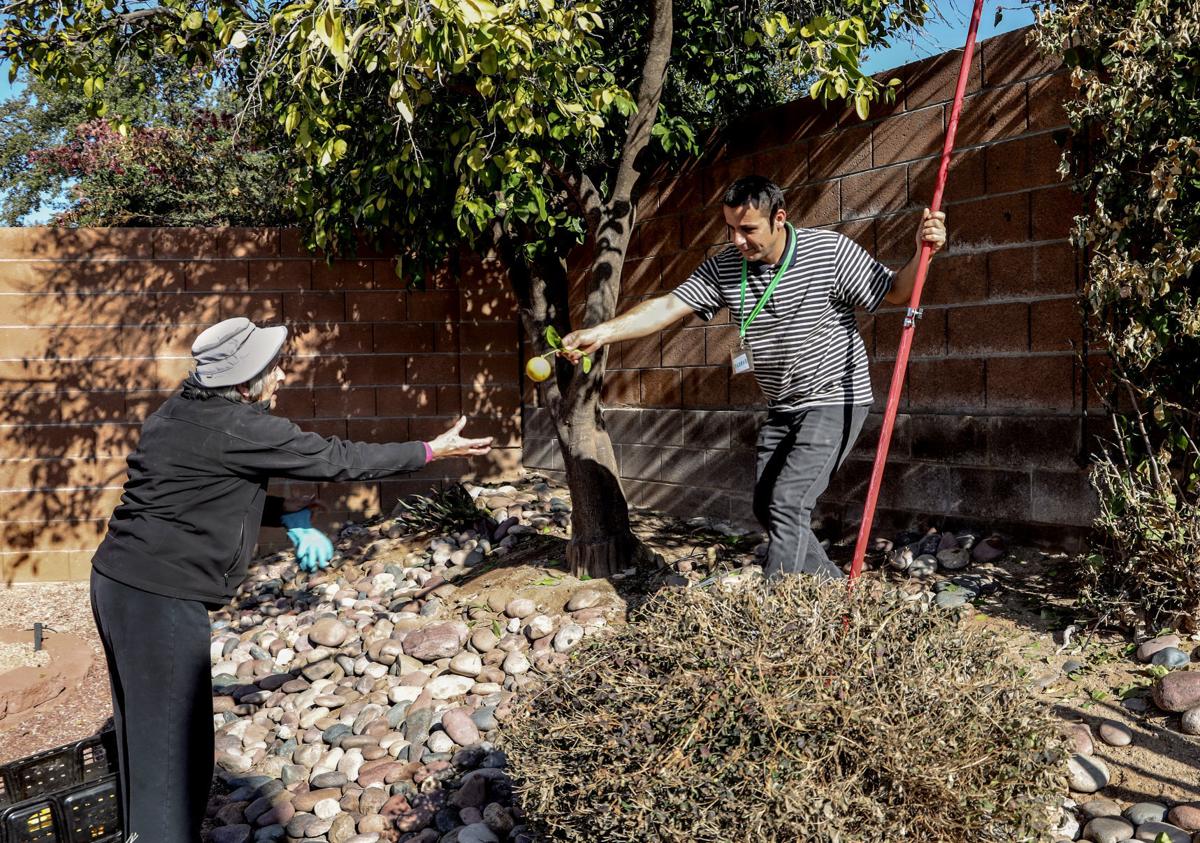 Kay Bauman and Sardar Ahmed are members of the Iskashitaa Refugee Network, which organizes refugees to glean fruit and vegetables for distribution to refugee families.

Tim Steller is the Star's metro columnist. A 20-plus year veteran of reporting and editing, he digs into issues and stories that matter in the Tucson area, reports the results and tells you his opinion on it all.

At least he spelled Tucson right.

Given President Trump’s record of misspellings on Twitter, we could have expected “Tuscon.”

The implications of the rest of the president’s Tuesday tweet on Tucson, though, were all wrong.

The president tweeted about our town because two young Somali men who came here as refugees were arrested by the FBI at Tucson International Airport, allegedly as they tried to make their way to Egypt to join the Islamic State terror group.

More specifically, he apparently tweeted about the arrests because there was a short segment on the case on Trump’s favorite TV show, Fox and Friends, which he mentioned in the tweet.

The whole text went like this: “Somali refugees arresed in Tucson on way to Egypt. They were in touch with an agent posing as a terrorist. One of them stated, “The best wake up call is Islamic State to get victory or another 9/11.” Get smart people! #MAGA #KAG @foxandfriends”

Yes, he did misspell arrested. And he said “Get smart people,” without a comma before the word “people,” which left me wondering what he meant.

The fact that the president bothered to make a public statement about the case is a bit puzzling. Some mass shootings or other American tragedies go by without a tweet.

And on balance, that’s OK with me — I don’t want the president weighing in on every moderate-sized piece of news from a country of 330 million. He should have better things to do.

And this was just not that big a deal. It’s a case showing minimal apparent threat to Americans, and zero actual injury, yet the president saw fit to use his bully pulpit to draw attention to it.

Why? I think it’s because the case reinforced one of his favorite themes — the idea that refugees, especially Somalis, are dangerous, and the broader idea that Americans are threatened by foreigners.

Throughout his campaign, and during his presidency, Trump has bashed refugees as a danger to America. And he has drastically cut the number admitted, down to 22,500 last fiscal year. Now, Politico reports, the administration is considering slashing the number to zero next year, which would be embarrassing for a country as big and wealthy as ours.

In addition, for the past month, Trump has been escalating his rhetoric against a particular Somali refugee who became a U.S. citizen and is now a Democratic member of Congress from Minnesota, Ilhan Omar.

So, Somali refugees are a topic of special interest for Trump, and represent a special political opportunity to spread alarm.

That isn’t to say this is an illegitimate criminal case. According to court filings, undercover FBI agents and informants seem to have done their job by documenting how these two Tucson residents tried to join the Islamic State, a designated terrorist group.

In his tweet, Trump highlighted one of the scant suggestions in the 15-page affidavit by FBI special agent Michael Mutari that these two young men were interested in attacking Americans, the comment about “another 9/11.”

The thrust of Mutari’s narrative suggests these two, Ahmed Mahad Mohamed, 21, and Abdi Yemani Hussein, 20, were set on traveling overseas to fight in the Sinai Peninsula.

That doesn’t mean they don’t deserve to be arrested. It just means they weren’t a particularly significant threat to Americans, especially when you consider the broader context of everyday violence in America.

More importantly, these two don’t represent refugees or even Somali refugees in any meaningful way.

In one of the most important passages of the affidavit, Mutari wrote that Mohamed told an undercover agent “they had to be very smart and careful with their plan, and that his family would contact law enforcement if they knew what he was thinking or planning.”

This does not come as a surprise to anyone who has known Somalis or other refugee communities in Tucson. These are people fleeing terrorism and other violence. They don’t want more, and they’ll turn against those who endanger their own community this way.

“I’ve worked with thousands of Somali refugees,” Barbara Eiswerth of the local nonprofit group Iskashitaa Refugee Network told me Tuesday. “All I can say about them is they are peace-loving people who want to give back to society.”

“Nearly all refugees are grateful to be here and want community integration,” she said.

The group she founded organizes refugees to glean excess fruit and vegetables from local owners’ citrus trees, gardens and farms, for distribution to refugee families and food banks.

I spoke with a leading member of the local Somali community as well on Tuesday. He didn’t want to be quoted or named because of the sensitivity of the situation. All I can say is, the image that the president presents of this group is broadly inaccurate.

Tucson Police Chief Chris Magnus has seen this as well. When I asked him about Trump’s tweet, he said, “The implication is that somehow this is the tip of the iceberg, and that these members of the community are all involved in some sort of nefarious activity. That’s just patently false, and it’s sad.

“Our experience is that these are largely folks who are law-abiding, perfectly reputable and caring members of the community,” Magnus told me.

So I’m left to wonder what the president meant when he said “Get smart people” in his Tucson tweet. I suppose he means that we should think of all Somali refugees, or refugees in general, as dangerous and threatening.

But of course, that would not be smart at all.

The smart part of Trump’s tweet? I suppose that was limited to spelling Tucson right.

One of the men told an undercover agent many times that he wanted to be the “beheading guy,” court records say.

Early on Tuesday, President Trump wrote a tweet about two Somali refugees from Tucson who were arrested.

Kay Bauman and Sardar Ahmed are members of the Iskashitaa Refugee Network, which organizes refugees to glean fruit and vegetables for distribution to refugee families.