Tim Steller's opinion: You can count on Ducey to do the bare minimum
Share this
1 of 2 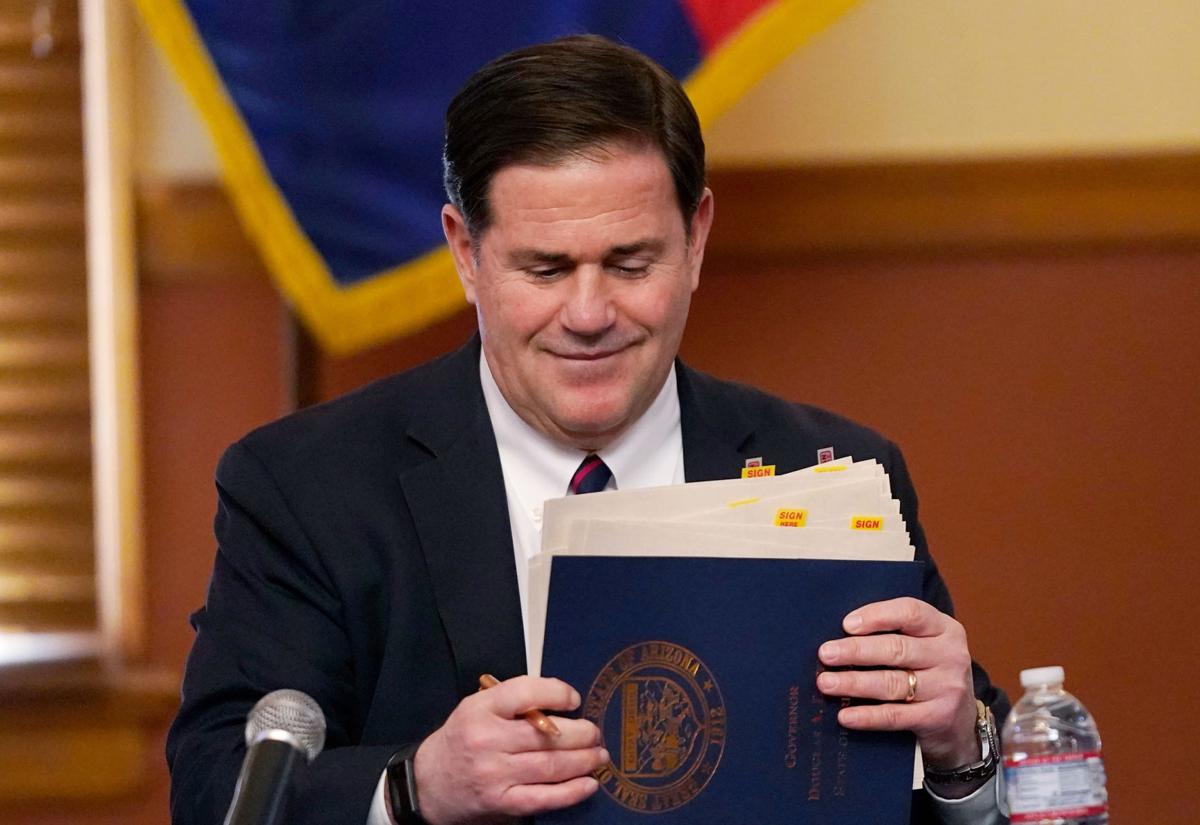 Gov. Doug Ducey organizes his signed election documents as part of the certification of the election results for federal, statewide and legislative offices and statewide ballot measures at the Arizona Capitol.

We can count on Gov. Doug Ducey for one thing.

Time and again, he has shown that if he absolutely has to do something, he will do the bare minimum.

When crises are facing the state, it would usually be better if he did more, sooner. But that’s not the Ducey way.

This became clear again Monday, when the two crises of the moment hit key inflection points. Rudy Giuliani brought his “election fraud” circus to Arizona on the same day Arizona officials were required to certify the state’s election results.

And in Tucson, Mayor Regina Romero proposed a new curfew in the city to deal with the COVID-19 outbreak, blaming the governor’s inaction for forcing her hand. It’s a questionable idea but made in a vacuum left by the governor.

Ducey surprised and pleased many Arizona Democrats, moderates and realistic Republicans when he signed the election certification.

He even ignored a call from the White House that came in as he went through the signing ceremony, symbolically silencing “Hail to the Chief,” the ringtone Ducey gave to the White House on his mobile phone.

It pleased people like me that he did it, since Ducey was such a strong Trump supporter in the presidential campaign, and the president was beseeching him not to certify. Trump went on to blast the governor Monday evening, after Ducey certified the election, in a live call to the Giuliani show in Phoenix and via Twitter.

But Ducey’s certification wasn’t an act of great bravery. The governor is required by law to certify on the fourth Monday in November the election canvass that each of Arizona’s 15 counties had already certified. Only the wild flailing of a desperate president made a routine, minimal act seem brave.

In a Twitter thread Monday night, Ducey gave a respectful nod to those perpetuating the election-fraud charade while defending his decision to sign.

“The problems that exist in other states simply don’t apply here,” he wrote.

What Ducey hasn’t done — what would take true bravery — is to confront the claims of election fraud head on.

The claims made Monday at the Hyatt Regency in downtown Phoenix had the veneer of credibility for those who don’t know how elections work. But they are in essence an effort to steal a fair election by claiming fraud while sitting among friends in a hotel, not among adversaries in a courtroom.

The witnesses, Coleman said, “aren’t knowledgeable enough about elections to have any idea how wrong they are.”

“A vast majority of the signature verification theory they talked about lacked facts,” Coleman said. “They said signatures are not reviewed. That is unequivocally not true.”

“What they were trying to say doesn’t have any basis in reality,” Coleman said.

The voting machines just count. One vote equals one vote — there is no weighting.

He leads from behind if he leads at all.

You could blame politics for his reticence. But the truth is, either way a politician goes on COVID-19, political danger awaits. Romero is facing a recall for allegedly overreaching in her response to the pandemic; Ducey faces a recall for doing too little.

I know I’d rather face a recall for doing too much than too little.

Romero blamed Ducey Monday for leaving her to take action on behalf of one city that should be coordinated among all jurisdictions statewide. Her preference, Romero said, would be that the governor impose a statewide mask mandate and curfew than for her to go it alone.

Now, in recent weeks, Ducey’s public relations team has stressed that cities such as Tucson, which adopted their own mask ordinances, have not been enforcing them. Patrick Ptak, Daniel Scarpinato and others pointed out this apparent hypocrisy as if it demonstrated the mayors’ complaints were simply political griping by Democrats against a Republican.

No doubt some politics are involved. But practically speaking, a statewide mandate would help emphasize the message that for now masks are essential and mandatory wherever the public gathers, no exceptions.

Now, I’m not convinced that this Tucson curfew, which passed Tuesday evening by a 6-0 vote, will help much, if at all. Of course, the virus is still working from 5 a.m. to 10 p.m. when there is no curfew.

But I sympathize with the positions the city governments are in: A wave of COVID-19 infections is rising, and they want to do something to keep hospitals accessible and prevent deaths before the wave crashes.

Yet, Romero said the governor is incommunicado. Answering a question from KOLD’s Bud Foster on Monday, she said she has not spoken with the governor since March. March! That’s inexcusable.

“We called the governor’s office through the weekend and again today,” Romero said. “We asked for a five- to 10-minute call. Unfortunately the governor declined to speak with me today. He did say he was very busy.”

Yes, he was busy doing the bare minimum in response to another crisis.

“What we’re seeing right now is scary,” Dr. Theresa Cullen, director of the Pima County Health Department, said. “Cases are well above our summer surge, when Arizona was a worldwide COVID-19 hot spot.”

Extra testing hours will allow 270 additional appointments per day each at the Kino Event Center and Morris K. Udall Center, plus expanded hours at the El Pueblo Center testing location.

As temperatures drop and COVID-19 cases rises, states begin to bring in equipment to keep test administrators and residents warm.

For the Kino Testing Center, 2805 E. Ajo Way, appointments are now available Monday through Saturday from 10 a.m. to 7 p.m.

At the Udall Testing Center, 7200 E. Tanque Verde Road, appointments are now available Tuesday through Sunday from 8 a.m. to 5 p.m.

The El Pueblo Testing Site, 101 W. Irvington Road, Building 9, appointments are now available Monday and Wednesday from 5 p.m. to 8 p.m., and Saturdays from 7 a.m. to noon.

Gov. Ducey is holding a media briefing about COVID-19.

Tucson's new curfew is a minimal measure, but it still hurts those in the hospitality industry who have suffered most from the pandemic. We have the money to cover them until the next lull in the spread, or till the vaccine is available.

Gov. Doug Ducey organizes his signed election documents as part of the certification of the election results for federal, statewide and legislative offices and statewide ballot measures at the Arizona Capitol. 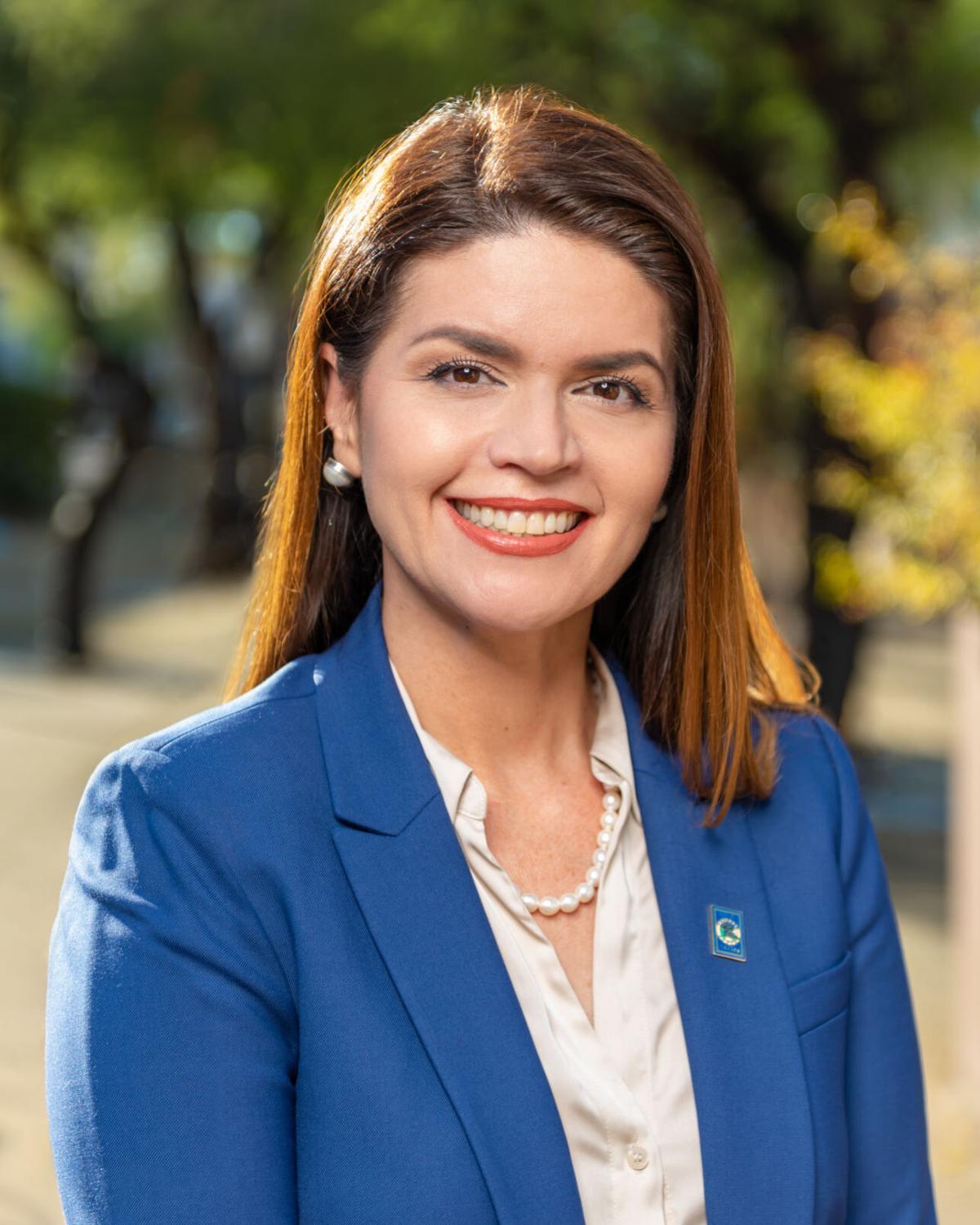