Eight months after awarding a contract to build a border wall across the San Pedro River, federal officials say they still do not have it designed or a construction start date.

As of last week, the wall project at the San Pedro consisted of pink tape wrapped around 17 cottonwood trees in the riverbed next to stakes that read “Remove tree.” Similar tape appeared on saguaros last year when wall construction started on Organ Pipe Cactus National Monument.

The contractor for the wall across the San Pedro River is “currently developing initial design plans” that could be ready by the end of January, according to Customs and Border Protection in Arizona. Construction will start sometime after the plans are finalized, but there is “not a firm date at this time.”

The new wall would replace a barbed-wire fence that runs alongside Normandy-style barriers across the riverbed. On the east side of the river, a row of boulders sit on the bank between the river and a metal-mesh border fence. On the west side, the barbed-wire fence and Normandy barriers run for about a half-mile before transitioning to 18-foot tall metal poles known as bollards.

Environmental advocates question the wisdom of building a wall across one of the only free-flowing rivers in the Southwest, particularly in light of previous damaging floods along the Arizona-Mexico border caused by rain water and debris building up against border barriers.

On Wednesday, cool water bubbled along a sandy channel on the eastern portion of the river bed. The stream was several inches deep and seemed tame, but a tree next to the channel showed how volatile the river can be. Northward-flowing water had swept branches, leaves, grass, and other debris around the tree as high as 10 feet off the ground. The force of the water was still evident, making it look as if a strong wind was still blowing the debris against the tree.

Since the contract for the wall across the river was announced in May, CBP has released little information about what the wall will look like or how it could impact the river.

Will the new wall be made of 30-foot tall bollards, as is the case with wall being built in eastern Cochise County, near Yuma and along the border in Organ Pipe and the Cabeza Prieta National Wildlife Refuge?

Will it be a bridge-like structure, as CBP officials said in response to a lawsuit last year?

Will water flow through gates in the wall that can be lifted when needed, as is the case in washes near Nogales and Lukeville? Will it have gates that swing open when water pressure builds up, as happens in remote washes east of Sasabe?

Or will the plan be scrapped rather than deal with what a Bureau of Land Management official called an “engineering challenge” last year?

For the San Pedro River wall, the Army Corps of Engineers “has been continuously working with contractors on a design that minimizes any negative impact to the environment,” according to CBP.

The final design will be required to “support the flow of water across the border, even during monsoons when the volume of flow can increase with the heavy rains,” according to CBP.

Tricia Gerrodette, a longtime advocate for the river, said she worries about the looming risk of flooding.

“The wall wouldn’t just fall over,” Gerrodette said as she stood on a dry portion of the riverbed last week. “The issue is that it catches debris and ultimately the force of water, which is pretty powerful, would be pushing against all that debris buildup on the Mexican side of the wall.”

If the pressure was great enough, it could knock down the wall and result in a “huge pile of debris that then would come crashing into these trees and topple some of them and add to the debris flow,” Gerrodette said.

A BLM official who oversees the San Pedro Riparian National Conservation Area brought up the potential for flooding in a July letter to CBP.

“We anticipate that installation across the San Pedro River of a typical 18 (foot) to 30 (foot) border barrier design could accumulate a significantly greater amount of sediment and debris than what is normally found in ephemeral drainages,” Scott Feldhausen, Gila District manager for BLM, wrote in the letter.

He noted that “at this time, we have not seen any proposed design for the San Pedro river crossing” and offered general comments based on recorded water flow rates in the river.

Flood flows can move quickly and strip away vegetation and river banks, making the installation of a barrier that is both permanent and permeable an “engineering challenge,” according to Feldhausen.

In two notable flooding events related to border fences, gates that were supposed to have been opened during rainstorms remained closed.

In August 2011, rainwater in a wash knocked down 40 feet of metal-mesh fencing near Lukeville, about 150 miles southwest of Tucson. Water flooded the Luke-ville port of entry and nearby businesses.

In July 2014, water and debris built up on the south side of the border fence in Nogales during a rainstorm. A 60-foot section of the fence was knocked down, causing a neighborhood downstream to be flooded, the Nogales International reported.

As for the lack of public information about the wall across the San Pedro River, Laiken Jordahl, borderlands campaigner with the Center for Biological Diversity, which has filed lawsuits to stop wall construction, called it “infuriating” and lamented that “land managers, local residents, ranchers and environmental advocates are all left completely in the dark.”

The marking of the cottonwoods for removal “shows us they plan on moving forward with no public involvement, no coherent plan, and no regard for this sacred river,” Jordahl said.

“Each tree is important,” he said. “Each tree provides habitat for myriad migratory birds and ground-dwelling critters. Ripping these trees out to build a senseless wall is unjustifiable. It’s needless destruction of our public lands all to feed Trump’s ego. In that sense, it’s no different from the butchering of sacred saguaros at Organ Pipe.”

CBP has faced numerous critiques about the potential environmental impact of the new wall. Last year, Department of Homeland Security officials waived dozens of federal laws, including those that require an environmental impact assessment, in order to speed up wall construction.

CBP officials said in September that they were developing an environmental stewardship plan for the wall projects in Arizona. The agency said it would publish the plan, but had not done so as of last week.

Border Patrol agents tracked down two F-250 pickup trucks bearing logos of the contractor building the border wall that they say were used to smuggle people.

Monsoon rains can swell the river to depths ranging from 6 feet to 17 feet.

Contractor building $1.3B border wall in Southern Arizona is accused of shoddy work in Texas

Residents living along the border near Arivaca and Sasabe worry about 'slapdash' quality from a wall that needs to traverse ravines and stand up to flooding.

A storm caused the river to swell to about 10 feet deep this weekend near the U.S.-Mexico border, leaving behind obvious signs of damage on Monday. 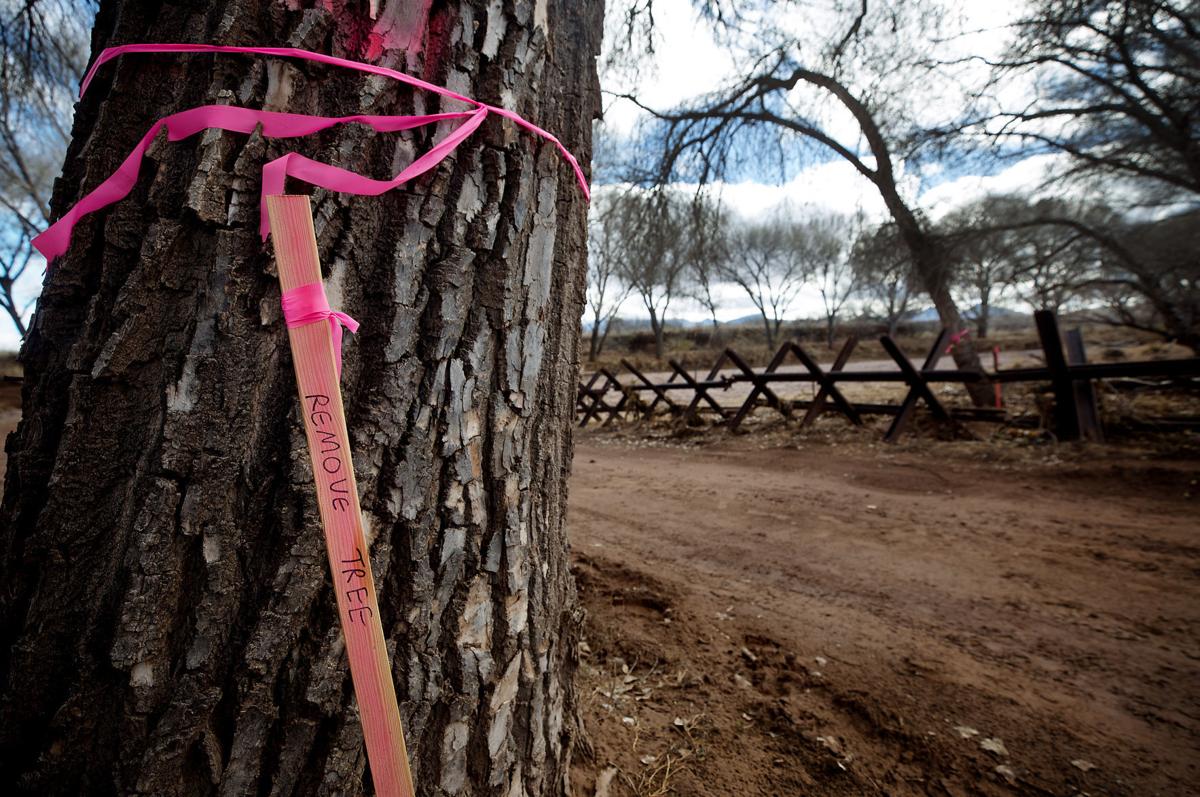 Tape is wrapped around some cottonwood trees that have been tagged for removal for a new U.S.-Mexico border wall across the San Pedro River. What type of wall it will be has yet to be decided, and the start date for construction is still undetermined. 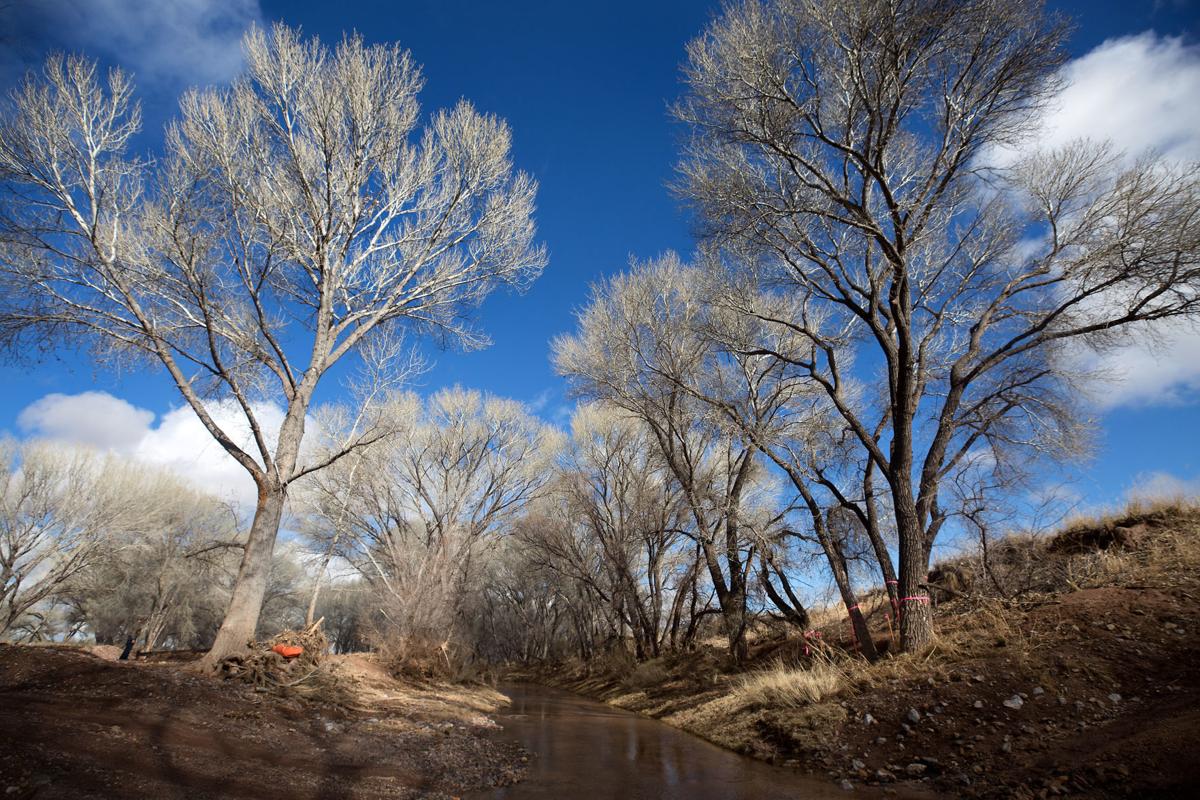 Environmental advocates question the wisdom of building a wall across one of the only free-flowing rivers in the Southwest, particularly in light of previous damaging floods along the border. 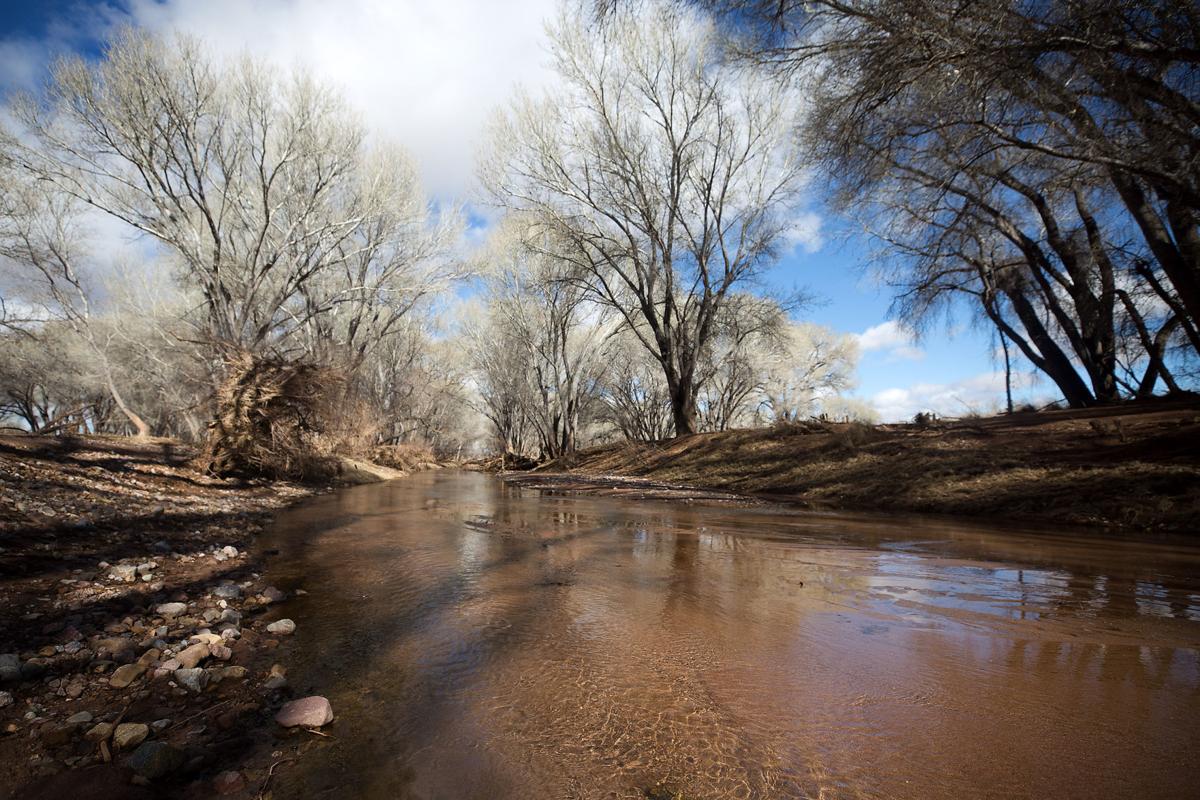 Since the contract was announced in May, there has been little information released about what the border wall across the San Pedro River will look like. 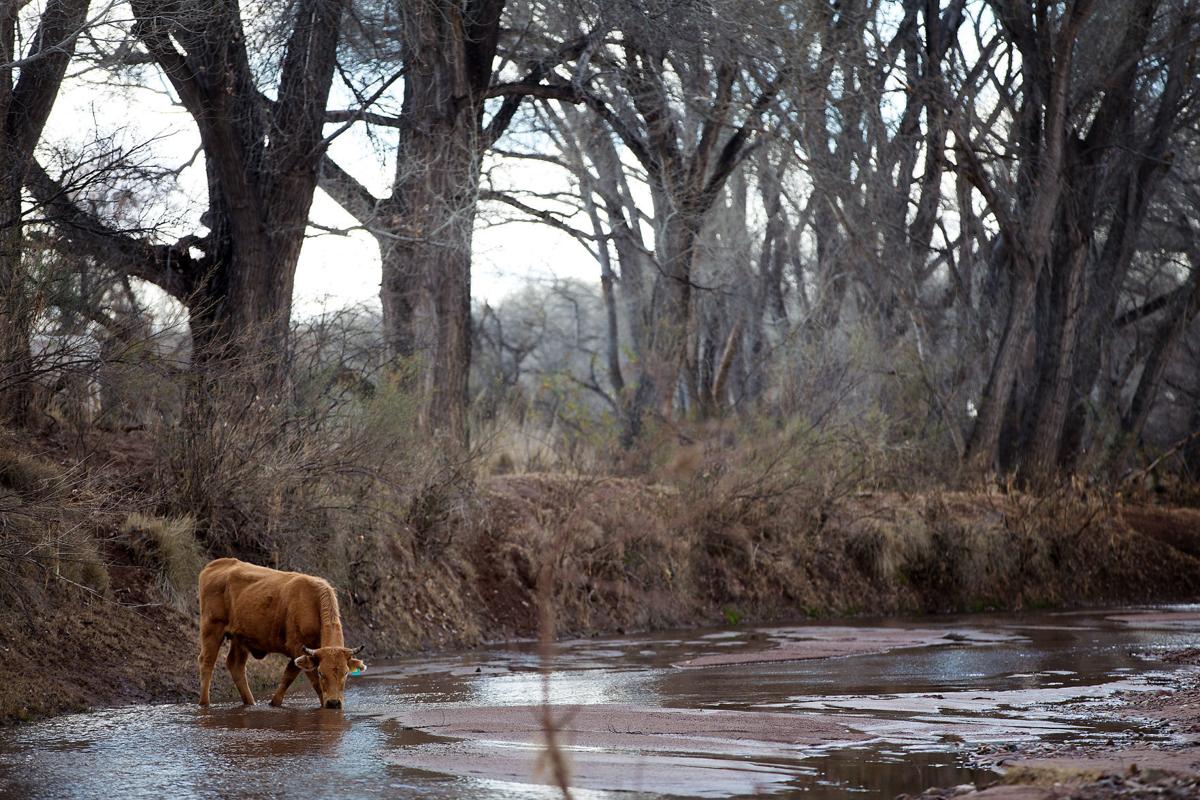 A cow drinks from the San Pedro River on the Mexico side of the border. The design of a border wall will be required to “support the flow of water across the border, even during monsoons,” according to Customs and Border Protection.