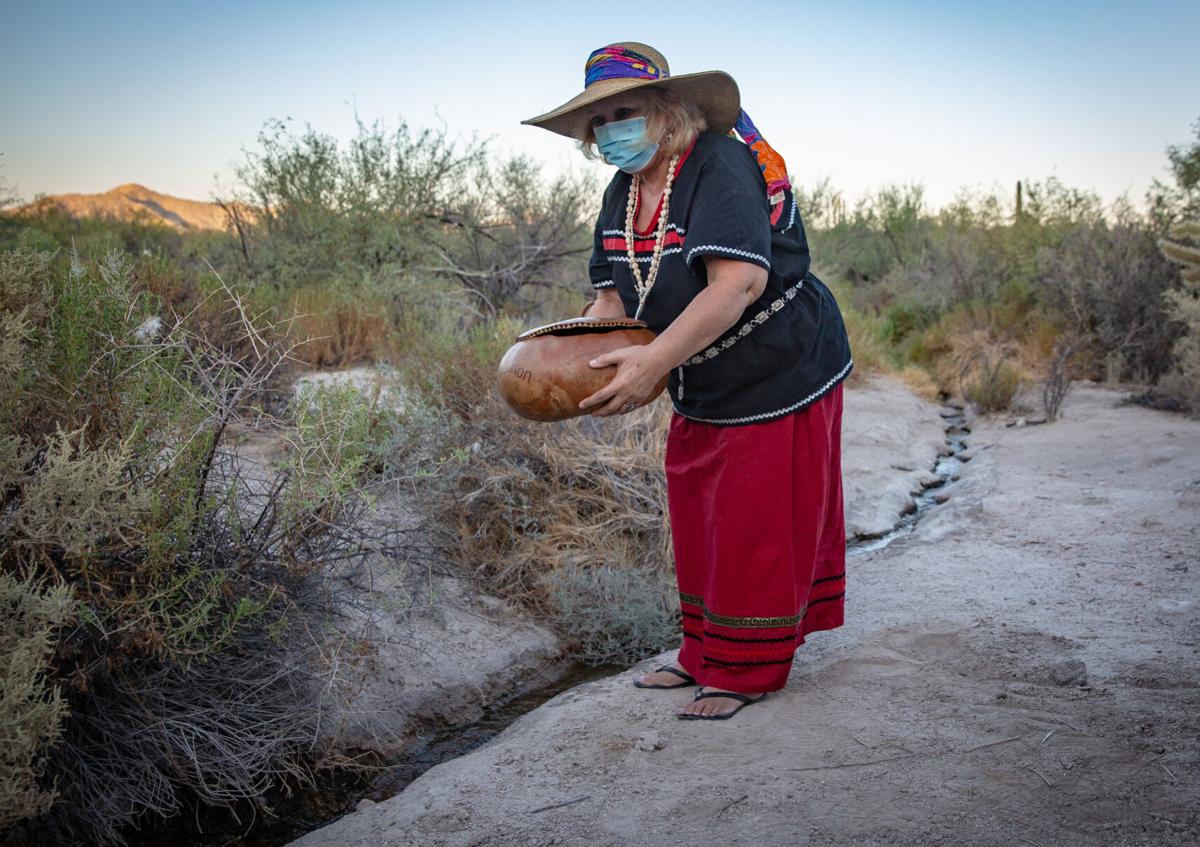 Eleanor Ortega fills a gourd with water from Quitobaquito Springs before a tribal ceremony at Organ Pipe National Monument. 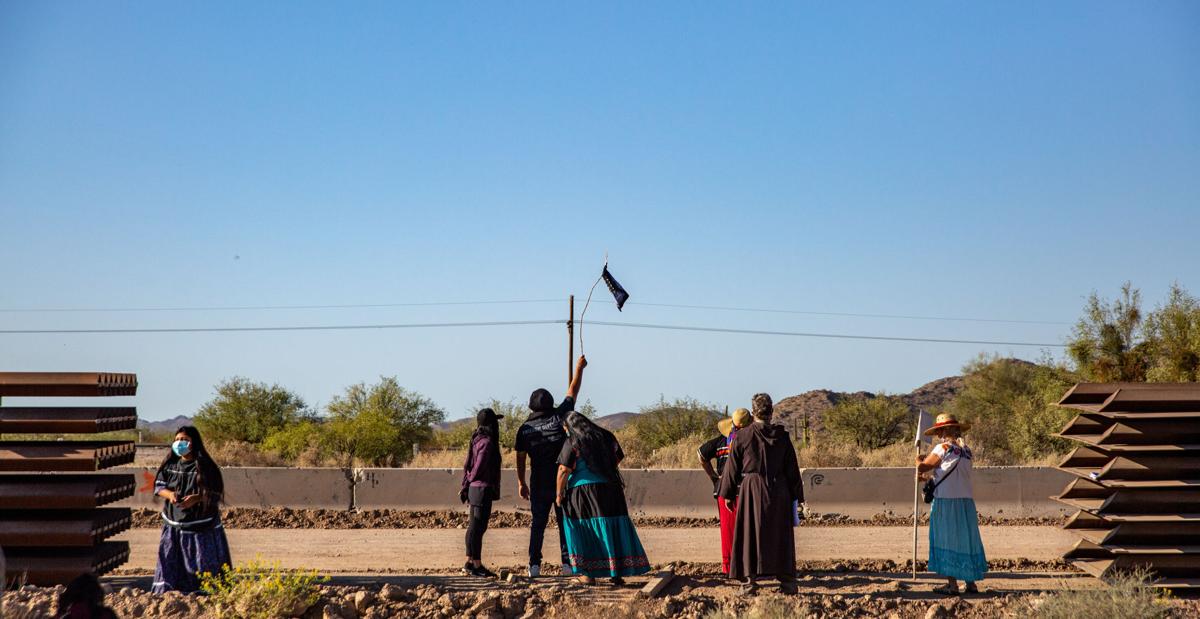 Tohono O’odham and Hia C-ed O’odham tribal members stand between border wall segments waving a flag to get the attention of sacred runners on the Mexican side. 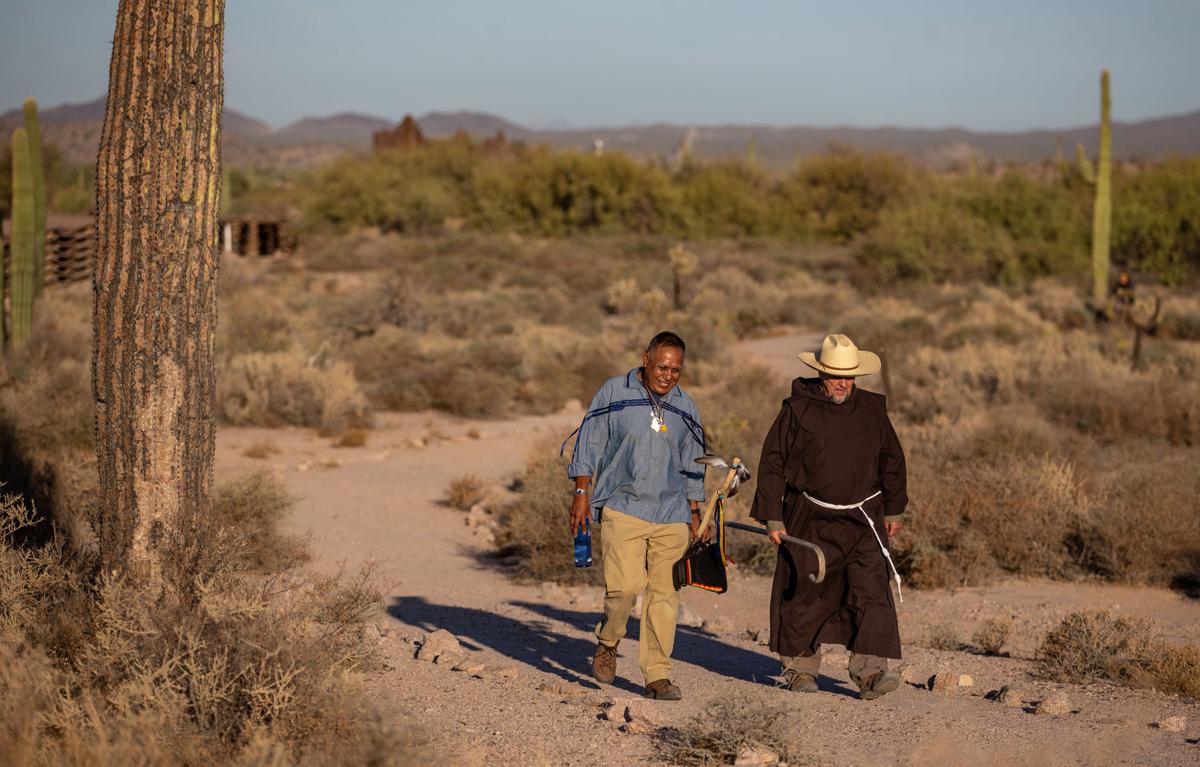 Austin Nunez, chairman of the San Xavier District of the Tohono O’odham Nation, walks with Gary Nabhan on a trail outside Quitobaquito Springs on Organ Pipe National Monument. 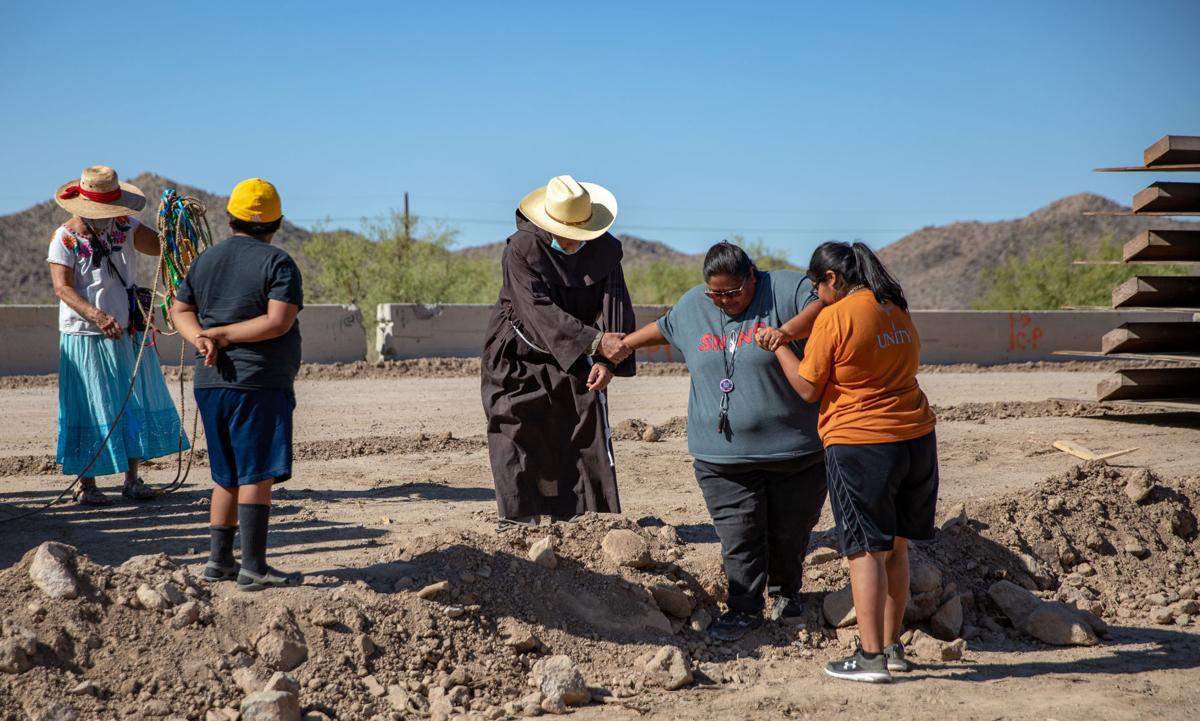 Roge Enos, a member of the Tohono O’odham tribe, is assisted over a pile of dirt on the border road along the U.S. side of the U.S.-Mexico border following a ceremony near Quitobaquito Springs at Organ Pipe National Monument.

ORGAN PIPE CACTUS NATIONAL MONUMENT — Oʼodham people from both sides of the border met Sunday morning to exchange blessings through an opening in the international boundary that won’t be open much longer.

As federal officers watched from their vehicles about a quarter of a mile away, the two groups talked and prayed on the spot where the new border barrier is set to be built near the desert oasis of Quitobaquito Springs.

Then they swapped wooden staffs adorned with ribbons and vessels filled with water, offerings meant to unite them and help heal the springs on either side of the boundary.

“We’re here to bless everyone on Mother Earth,” even the Border Patrol, said Manuel Osequeda Jr. Osequeda, a district chairman for the Tohono O’odham Nation.

The gathering also marked the end of a prayer run for two teams of youngsters, who set out Friday night from their respective sides of the border and covered more than 35 miles on foot.

The Mexican team of about 20 runners appeared at just after 8 a.m., trotting along Mexico’s Highway 2 in orange reflective safety vests with a local police escort.

The runners from the American side arrived about 35 minutes later — 16 O’odham boys and girls as young as 12 years old, whose relay from the community of Why carried them on a twisting path through the national monument.

Osequeda served as spiritual leader for the runners, some of whom hadn’t seen the new border wall yet. Until recently, he said, he hadn’t really seen the whole thing either, outside of a few pictures on social media.

Osequeda said the sight of it immediately reminded him of a prophecy by one of his uncles, who warned years ago of the appearance of a huge black snake across their lands.

“It hurt my heart. I had a tear in my eye when I saw it,” he said. “It’s not supposed to be there. The black snake, as I call it now, shouldn’t be laying there.”

The peaceful gathering came on the heels of recent protests at the border construction site that resulted in scuffles with federal law enforcement officers and the arrest of two O’odham women.

This time, federal officers kept watch from a distance but did not intervene when the two groups met in ceremony at the boundary line.

There was no construction activity at the site Sunday morning, but work is progressing swiftly on President’s Trump’s promised wall.

The barrier can now be seen from Quitobaquito Springs itself, where an alarming drop in the water level has led to questions about the impact of groundwater pumping associated with the multi-billion-dollar construction project.

Lorraine Marquez Eiler’s great grandparents were among the last O’odham people to live at Quitobaquito, where they farmed until the early 1900s. She said they left “because of the encroachment of too many people” moving across their land.

Eiler said the water in the spring is as low now as she has ever seen it in her life — something she blames on drought and the construction work.

“With their blasting and heavy loads and all the pumping of water every five miles, they’re disturbing the whole ground,” Eiler said.

Gary Paul Nabhan is a Southern Arizona orchard keeper, agricultural ecologist and Franciscan brother who has studied and fought to protect Quitobaquito since the 1970s.

The respected researcher and author said the decline of the spring is something he “can’t think about in the abstract.”

In 1982, he sat on the low branch of a cottonwood tree and lowered his child into the water of Quitobaquito to be baptized. Today all that’s left of that tree is a stump.

“And that’s just a little thing for me,” he said. Just imagine losing something that has been vital to your people for countless generations.

“It’s been 8,000 years of continual use of that place for water, food and prayer,” Nabhan said.

That might explain why Sunday’s gathering drew members of more than a half-dozen tribes from across the Southwest and Mexico.

Stan Rodriquez drove in from San Diego as a representative for the Kumeyaay people, whose traditional land in Southern California and northern Baja, Mexico, has also been divided by the border — and more recently by Trump’s new barrier.

“We’re here in solidarity,” he said. “It cuts through our territory, too."

Across Pima County, 25,445 cases of coronavirus have now been confirmed, up 33 cases from the day before.

The Arizona Department of Public Safety warned activists to clear the road before they moved in on the crowd, officials say.

Eleanor Ortega fills a gourd with water from Quitobaquito Springs before a tribal ceremony at Organ Pipe National Monument.

Tohono O’odham and Hia C-ed O’odham tribal members stand between border wall segments waving a flag to get the attention of sacred runners on the Mexican side.

Austin Nunez, chairman of the San Xavier District of the Tohono O’odham Nation, walks with Gary Nabhan on a trail outside Quitobaquito Springs on Organ Pipe National Monument.

Roge Enos, a member of the Tohono O’odham tribe, is assisted over a pile of dirt on the border road along the U.S. side of the U.S.-Mexico border following a ceremony near Quitobaquito Springs at Organ Pipe National Monument.