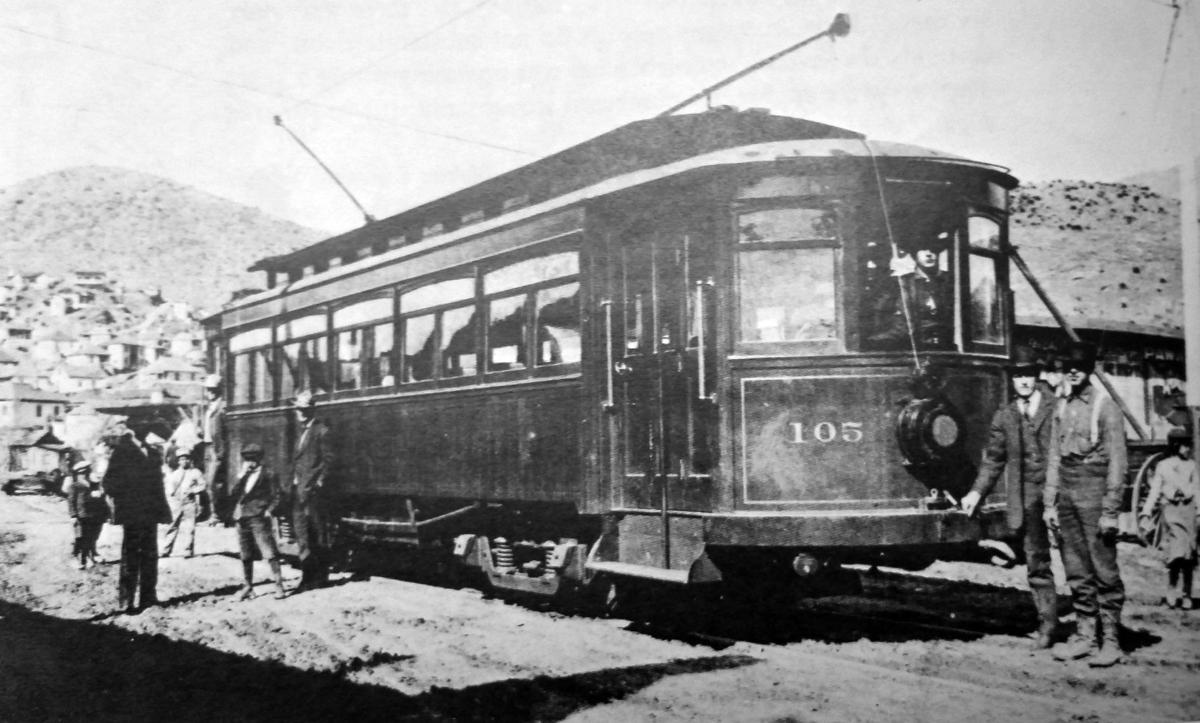 A 1910 postcard depicts a McGuire-Cummings Interurban car on the Warren-Bisbee Railway around Castle Rock. 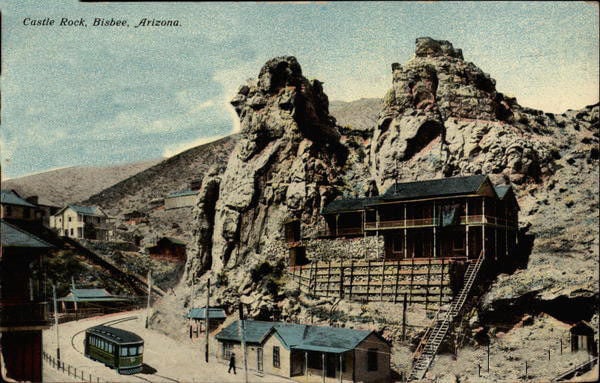 Trolleys or streetcar lines contributed to early 20th century public transportation in the Arizona towns of Tucson, Phoenix, Prescott, Bisbee and the smelter town of Douglas.

Miners in Bisbee and Douglas benefited from trolley transportation funded by the copper mines as a more efficient way of traveling from home to work, and also for conducting commerce in town. The 10-mile single-track Douglas Street Railway, composed of double-ender cars — cars able to run in either direction without having to turn around at the end of the line — connected to the Calumet and Arizona smelter on the north end of town and the Copper Queen smelter in the west.

Douglas streetcar usage began in 1903 with the “Peanut Roaster,” a tank locomotive disguised to appear as a streetcar to avoid scaring horses.

The steam dummy engine hauled an unpowered open trailer of passengers. Paneling used to cover the locomotive’s wheels gave it the facade of being run on electric power, which would officially arrive in 1906.

The Warren–Bisbee Railway included six McGuire-Cummings “Interurban” cars that linked communities, and 12 streetcars accommodated a peak population of 25,000 at the height of copper production in the Warren Mining district in 1916.

A powerhouse with two Westinghouse Parsons steam turbines, 400 horsepower and 670 horsepower at the Oliver Shaft on the central part of the line, provided 600 volts of direct current.

Trolley fares averaged a nickel, though could be higher, depending on multiple stops with operating times averaging between 5 a.m. and 2 a.m. to cover mining work shifts.

The wooden cars were 42 feet long and could seat 40 passengers, with additional space for 75 standing passengers.

Four 40-horsepower motors were typically used to power each car over as much as 7 percent grades.

Air brakes on each car enabled them to be held in place on steep gradients, which can be attested to by the fact that no runaway cars occurred during the Warren-Bisbee Railway’s existence.

Wrecks were rare in the history of mining town trolleys, the most notable of which was the wreck of Aug. 26, 1913, in Bisbee.

It involved a collision between an open car and an Interurban car.

More than 50 reported injuries and several fatalities were the result of human negligence — the trolley’s air valves were not properly set.

Challenges beset streetcar usage in the 1920s, including floods and washouts, the declining market price for copper, heightened automobile usage and deferred maintenance on the actual cars with some tracks needing replacement.

In 1928, Bisbee’s street cars were phased out by a public vote of 448 to 35 to accommodate a more-efficient means of transportation —a bus line.

Many of the trolleys were used to fill in the mines and recycled as scrap metal.

Today, scant remnants of the trolley lines in Bisbee and Douglas exist, except for the ruts indicative of streetcar tracks buried under multiple layers of concrete.

The creation of the Lavendar Pit Mine has removed most vestiges of the Warren Bisbee interurban line.

Archivist, historian and author William Ascarza’s forthcoming book “In Search of Fortunes: A Look at the History of Arizona Mining.” For more information, contact M.T. Publishing Co. at (812) 468-8022, or http://bit.ly/1KdZ8y4

• Francaviglia, Richard V. Streetcars to the Smelter: An Historical Overview of the Douglas Street Railways, 1902-1924.

Mine Tales: Brickmaking in Tucson dates to 1880s

Mine Tales: Salt crucial throughout history, is found in state

Some of the thickest known salt deposits in Arizona are north of Kingman and west of Phoenix.

A 1910 postcard depicts a McGuire-Cummings Interurban car on the Warren-Bisbee Railway around Castle Rock.