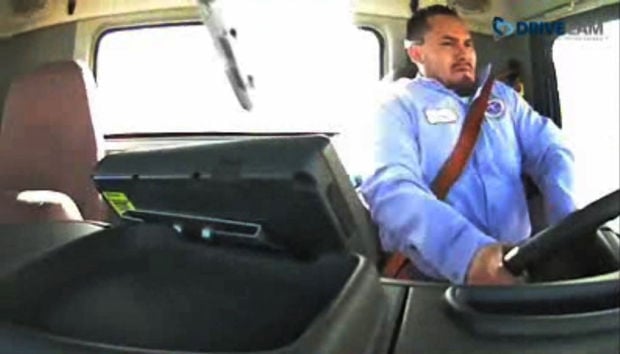 In this cab video, a cellphone, upper left, flies from the hands of driver Jorge Espinoza as his tanker truck collides with the first Arizona Department of Public Safety patrol car at high speed on Interstate 8. His truck struck two more police cars and two firetrucks May 6. ﻿

This frame shows the truck Jorge Espinoza was driving tilting to one side as it travels over the first patrol car. His truck continued into the accident scene on the shoulder, striking a second patrol car and killing DPS Officer Tim Huffman.

PHOENIX — A truck driver was using his cellphone to look at photos of women on Facebook when he crashed into three police cars and two fire trucks on Interstate 8, killing a DPS officer, records obtained by the Star show.

Officer Tim Huffman was killed in the May 6 wreck on eastbound I-8 in Yuma County. The truck driver, Jorge Espinoza of Yuma, is charged with second-degree murder, endangerment and criminal damage.

The investigation report was made public Thursday after an Arizona Daily Star public records request.

Espinoza, who at the time was working for Evans Dedicated Systems Inc. of Commerce, Calif., was driving an empty fuel tanker 65 mph with the cruise control on when the crash happened.

He initially told investigators he didn’t see the police cars or the Arizona Department of Public Safety captain who was directing traffic around a closed lane because he was looking in his mirror at a passing truck. He also said he never uses his phone while driving because it is against company policy, the police reports show.

However, information taken from the phone shows Espinoza was using the Internet at the time of the crash, according to the reports.

He was in Facebook looking at “photographs of several women in provocative positions, wearing little clothing,” “photographs of a woman in a low-cut dress,” and photos of a man “smoking something,” according to the reports.

A camera on the dashboard of his truck shows his Samsung Galaxy 3 phone fly out of his hand in the crash, although he had apparently tried to cover the camera with his wallet, police say.

Other officers and medics who were with Huffman responding to an earlier crash witnessed the crash and tried to save Huffman, who had been sitting in his car. They pulled the windshield and dash off his car to try to help him, and they got a “Jaws of Life” tool out of one of the damaged firetrucks, but Huffman died in the car, reports show.

Investigators concluded: “Espinoza would have been able to perceive the danger in the roadway and not cause the death of Officer Tim Huffman, endangered the lives of 11 other emergency responders and destroyed six vehicles, including a new semi-tractor and trailer owned by his employer, if he had not chosen to distract himself while accessing Facebook from his cellular telephone while operating his assigned commercial vehicle.”

Federal law bans the use of electronic devices while driving a commercial vehicle.

Arizona, however, doesn’t have a distracted-driving law, said DPS spokesman Officer Carrick Cook, and the agency hasn’t done anything differently to try to catch distracted drivers since the crash.

State Sen. Steve Farley, D-Tucson, has been proposing such a law since 2007.

He said this crash highlights the urgent need for a statewide texting ban, which is opposed by Senate President Andy Biggs.

Farley’s bill would make using an electronic device while driving a primary offense, meaning a police officer could stop someone just for texting and issue a citation and fine. Currently, officers have to have another reason.

Farley said until such a law exists in Arizona, current laws regarding reckless driving and speeding could be used against distracted drivers.

“This is a major matter of public safety,” he said.

Speeding laws say a driver’s speed must be “reasonable and prudent.” Farley said it’s never reasonable to text or use the Internet while driving.

“You can still save lives by not doing this,” he said. “Put down your phone. Turn it off if it’s too tempting.”

Michael Donovan, who is Espinoza’s attorney, could not be reached for comment.

Dashboard video of trucker who crashed into police cars

Video is from the Arizona Department of Public Safety. The driver of an empty fuel tanker was using his cell phone to look at Facebook when he…

In this cab video, a cellphone, upper left, flies from the hands of driver Jorge Espinoza as his tanker truck collides with the first Arizona Department of Public Safety patrol car at high speed on Interstate 8. His truck struck two more police cars and two firetrucks May 6. ﻿

This frame shows the truck Jorge Espinoza was driving tilting to one side as it travels over the first patrol car. His truck continued into the accident scene on the shoulder, striking a second patrol car and killing DPS Officer Tim Huffman. 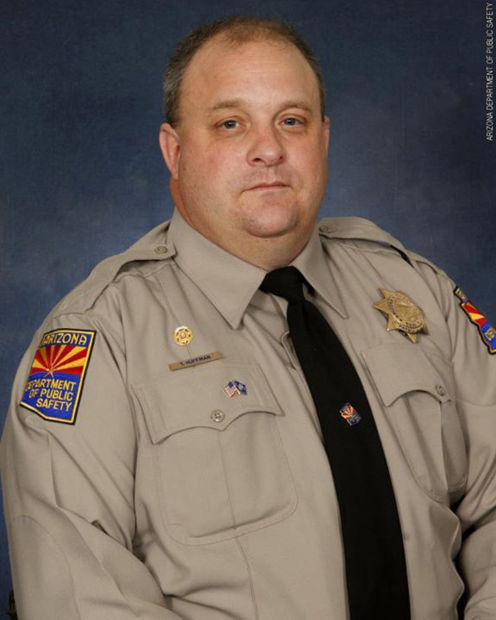