Trump rally appearance a boon, burden for Mexican eatery
Share this
1 of 2 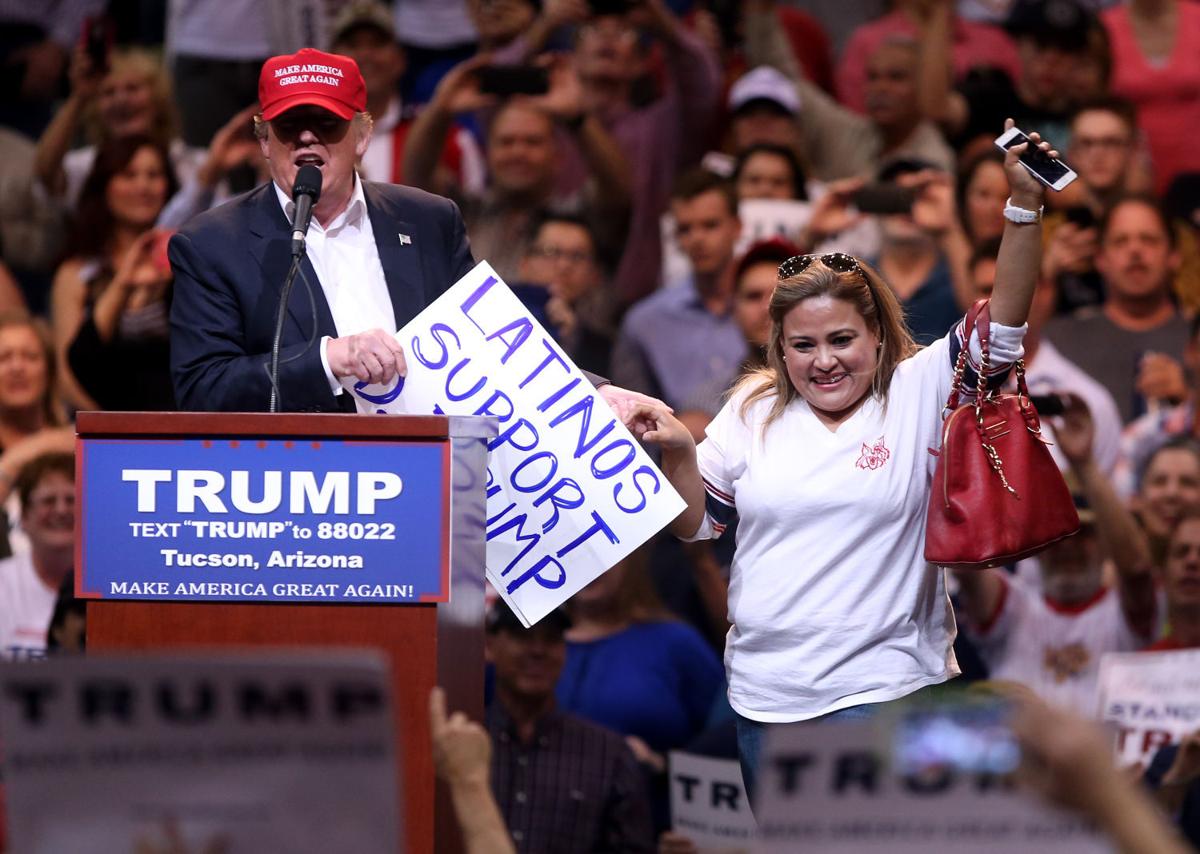 Betty Rivas, right, waves after she was brought on stage when Republican presidential candidate Donald Trump noticed her sign at his rally in downtown Tucson. 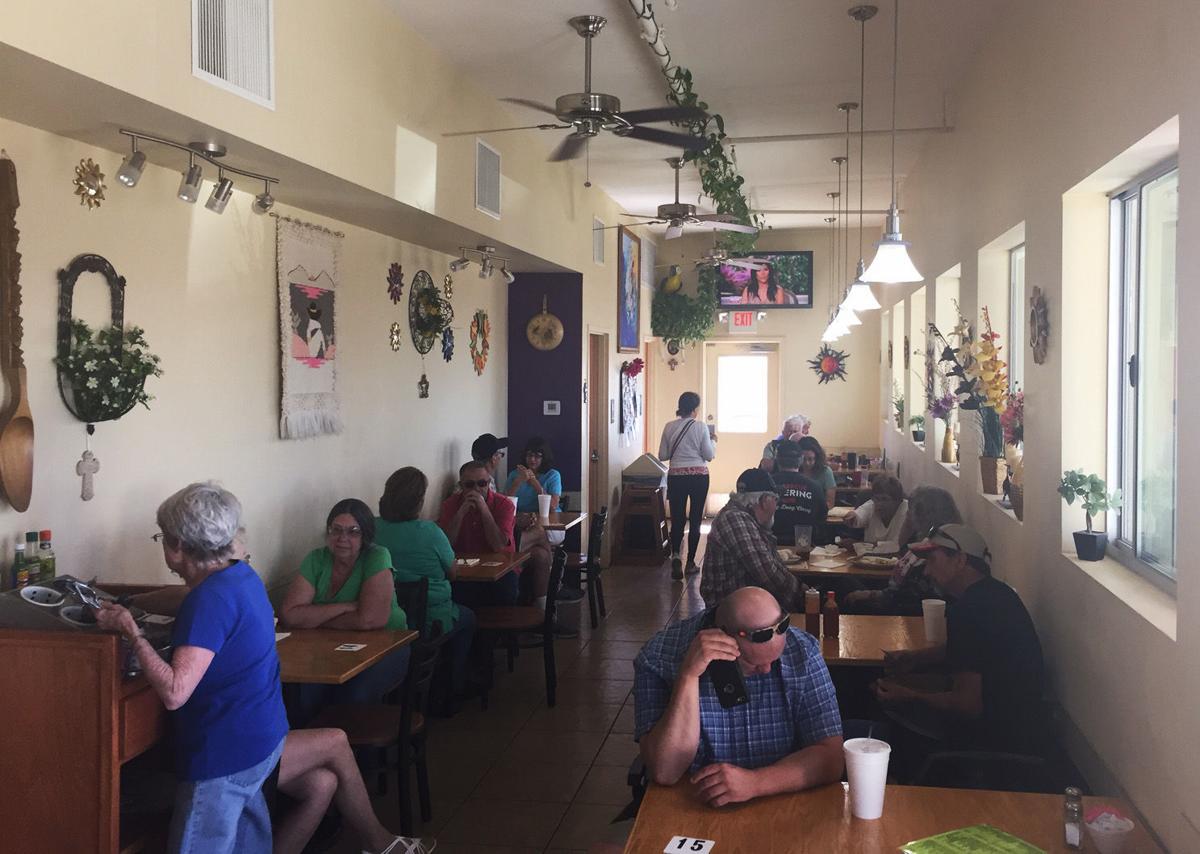 When the owners of Sammy's found themselves in the crosshairs of people opposed to Donald Trump in 2016, some locals flocked to the restaurant to show their support. After appearing at Trump's Phoenix rally last week, the owners are once again facing blowback, this time on social media.

A Mexican restaurant in the sleepy town of Catalina has become ground zero for a political fight in the race for the White House.

The phone has been ringing off the hook for the last 48 hours. And the Facebook pages for Betty and Jorge Rivas have been flooded with insults and threats. It all started soon after Betty Rivas was called to the podium by Donald Trump during a rally Saturday in Tucson. The Republican presidential candidate brought Rivas on stage after her handmade “Latinos Support D. Trump” sign caught his eye.

“I love her,” Trump said repeatedly.

The crowd-sourced web site that offers reviews of local businesses stepped in late Tuesday to remove some of the comments. By then anonymous users had posted that Sammy’s was dirty, the food was lousy and had a pest problem.

“They are doing everything to shut us down,” Jorge Rivas said. “Saying you are a racist, you are a pig, you are going to burn, you are an idiot.”

The couple never expected attending the Trump rally would affect the business they built over the last two decades.

“Saturday was a great day because my wife was able to celebrate her freedom of speech,” he said.

When word got out that the business was being targeted, Trump supporters and locals began pouring in to support the couple.

Karen Clarke, a Catalina resident, said she has known the family for years.

“I’ve known the owner’s kids since they were this high,” she says, lowering her hand down to her knees.

She waited in long lines to have lunch at Sammy’s on Tuesday, saying it was important to support the Rivas family.

The business had to shut down the drive-thru before noon because it was too busy for the three-person staff. The wait climbed to more than 30 minutes around lunch time.

One person who couldn’t wait handed over cash to support the family.

Brett Martyn-Dow said he isn’t a Trump supporter, but he drove with his daughter from the Tucson’s south side to support the family.

Martyn-Dow said he is supporting another candidate in November, but wanted to take a stand against online bullying.

When the pair arrived at Sammy’s at about 2 p.m., the restaurant had mostly run out of food. He and his daughter settled for root beer floats.

Michael Carlier saw a news story and decided to show his support, even though he never has set foot inside of the small restaurant.

“I saw the article about her receiving threats and I thought, I don’t any plans for lunch,” Carlier said. Even though his office is roughly 15 miles away, Carlier said it was worth the trip to support Betty Rivas.

“I just jumped up in the car and raced up here,” he said.

Jorge Rivas said the support has been heart-warming.

“Today has been overwhelming,” Rivas said, smiling as he juggled several orders. “It is great.”

Controversial strategy would have Tucson delegates vote for Cruz if Trump doesn't win on first ballot.

Hillary Clinton's campaign has paid its bill for rally at Sunnyside High School, but those of Donald Trump and Bernie Sanders still owe thousands.

Trump tweets support for owners of restaurant north of Tucson

President says he'll try to stop into the restaurant the next time he's in Phoenix; the restaurant is 115 miles away in tiny town of Catalina, north of Tucson.

The offer set no limits nor proof that you are unemployed.

Betty Rivas, right, waves after she was brought on stage when Republican presidential candidate Donald Trump noticed her sign at his rally in downtown Tucson.

When the owners of Sammy's found themselves in the crosshairs of people opposed to Donald Trump in 2016, some locals flocked to the restaurant to show their support. After appearing at Trump's Phoenix rally last week, the owners are once again facing blowback, this time on social media.