In 1956, then-Sen. Barry M. Goldwater, commander of the state’s first Air Guard squadron in Phoenix, asked then-Maj. Morris and a handful of other Phoenix unit members to establish a fighter group at Tucson International Airport.

The group established a squadron of Korean War-vintage F-86A Sabre fighter jets, conducting missions out of an old adobe farmhouse and dirt floor hangar with enough space for three aircraft, according to the Arizona Air Guard 162nd Wing.

Within weeks, what was then the 152nd Fighter Interceptor Squadron grew from a dozen airmen to 15 officers and 80 enlisted members.

Today, the base is home to the 162nd Wing, with 1,900 personnel, a robust international F-16 pilot training mission with more than 80 jets and a remotely piloted aircraft program.

His family, friends and numerous 162nd Wing colleagues were in attendance to celebrate the honor.

Tucson airport board agrees to new gate for Air Guard base

Salute to veterans on the anniversary of the Pearl Harbor attack

Our foe may have changed but behind it all, regardless of your political persuasion, is a group that have stood up and taken the call.

A 2018 agreement for the much-needed new gate was rejected by the National Guard Bureau.

An Iraqi F-16 jet, right, taxis after landing as an Arizona Air National Guard pilot lands in the background at Tucson International Airport. 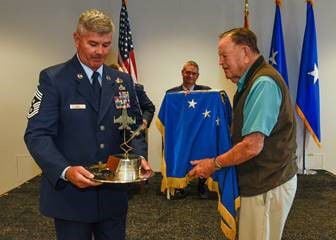