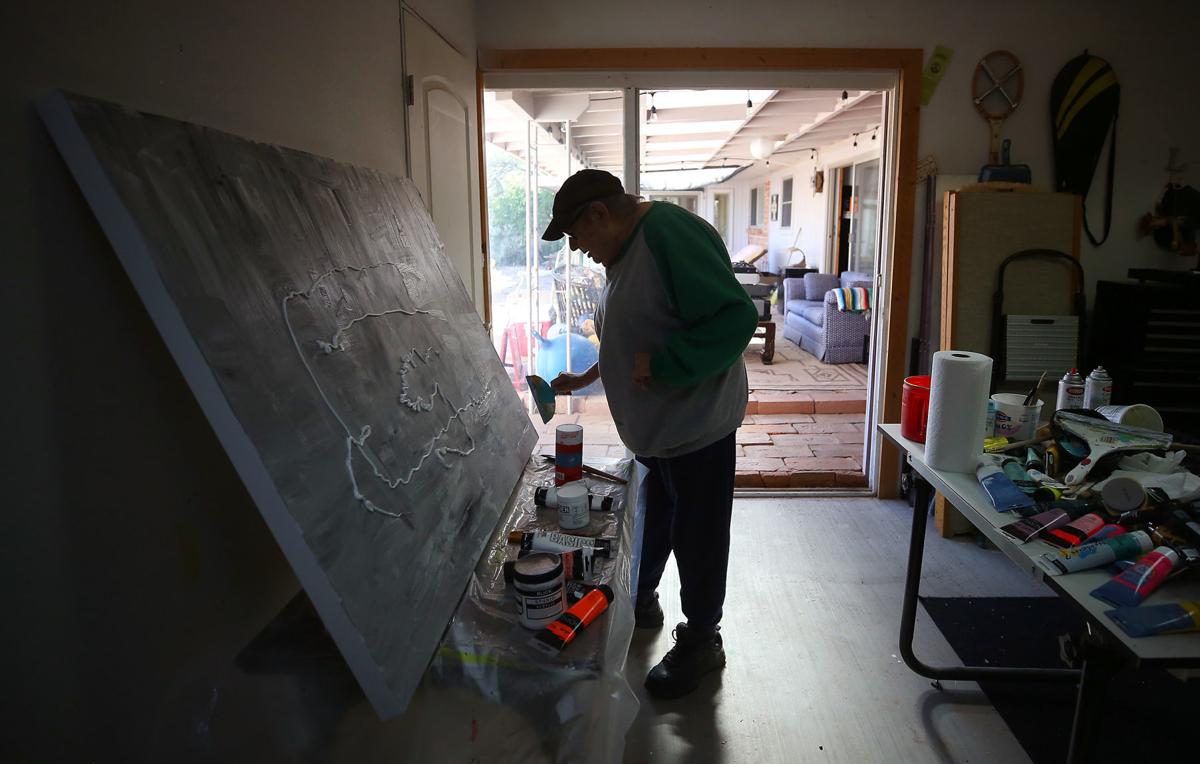 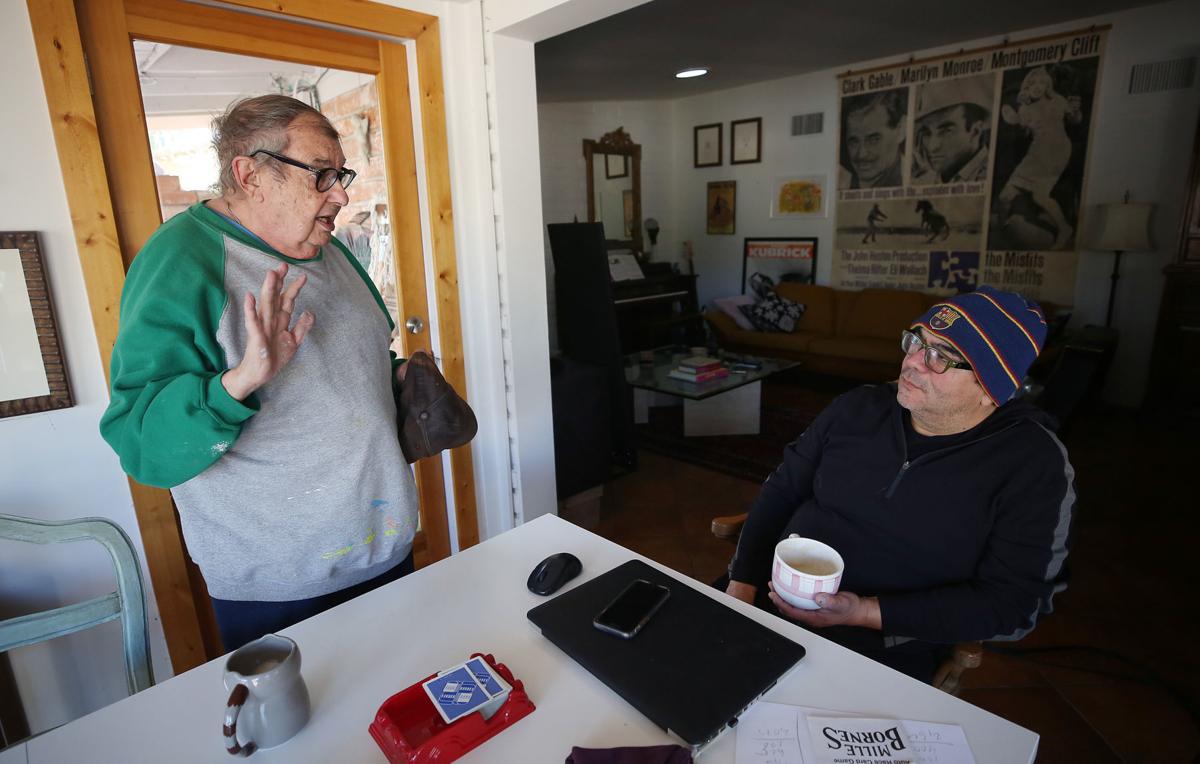 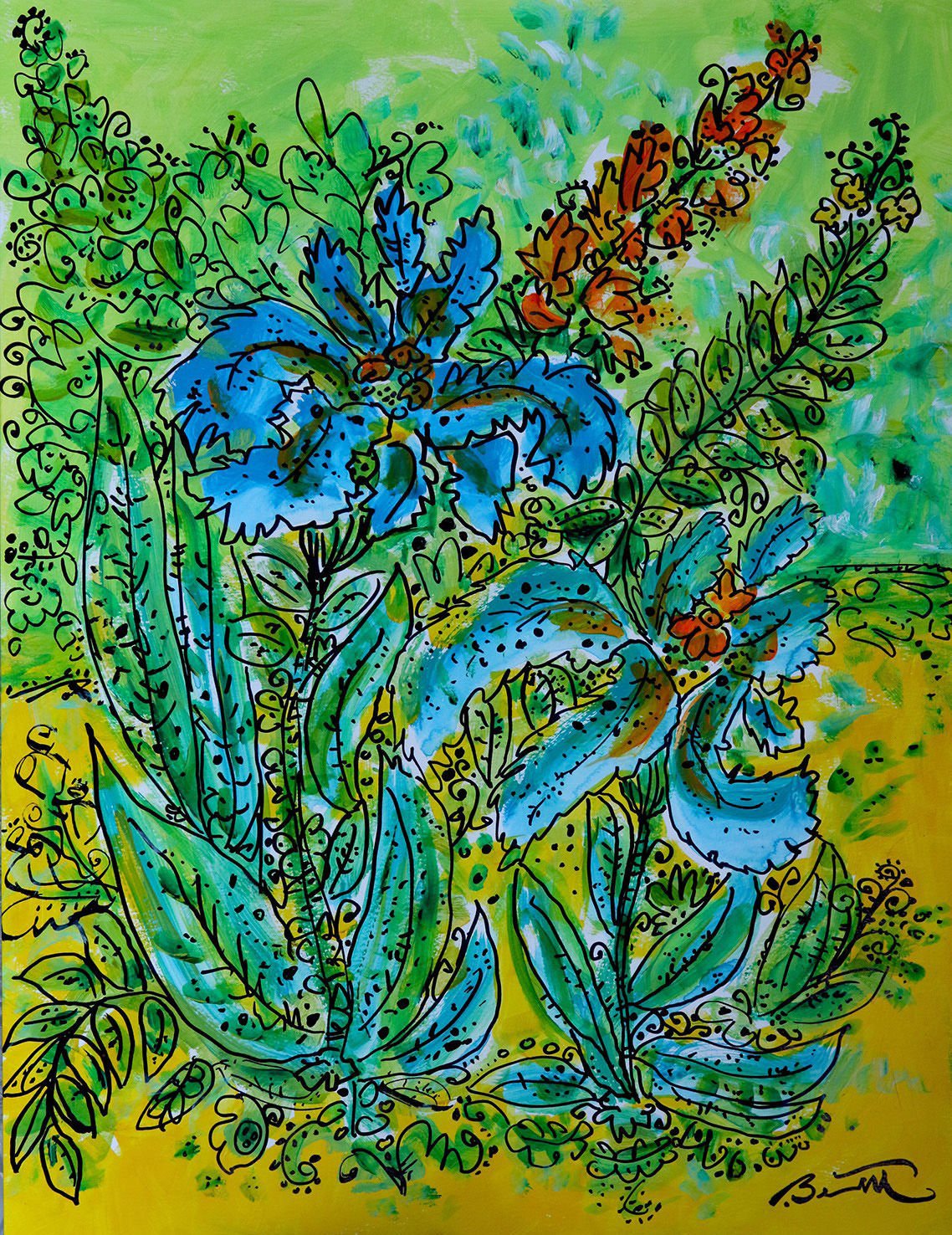 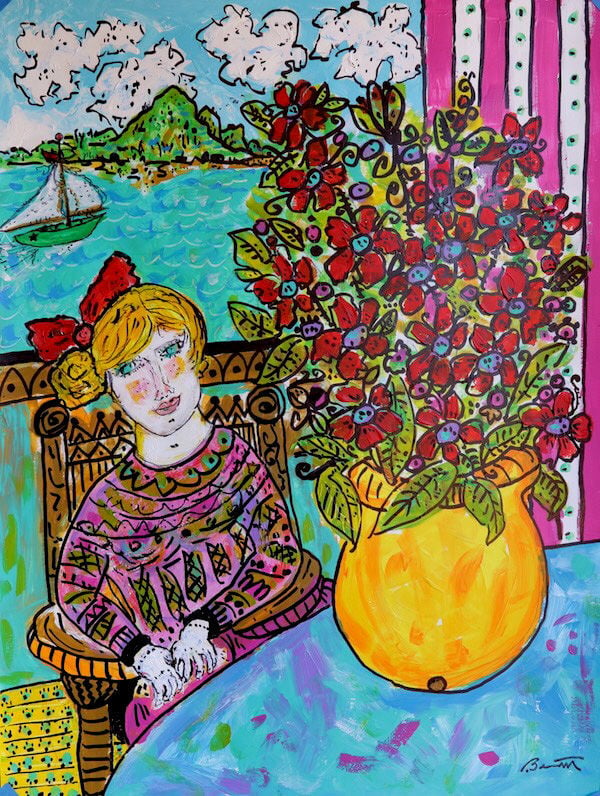 On a recent day, Bennett, 76, stands in the midst of many of his paintings that were recently featured in a showing at a downtown architecture firm.

The colors he uses are mostly vibrant hues of oranges, blues, greens, yellows and pinks. Some of his pieces are black and white. He paints with watercolor and acrylics — lots of abstracts and some landscapes and portraits.

While soothing to him, his artwork helps him deal with post traumatic stress disorder and the physical, painful scars left from a violent incident more than 40 years ago — a brutal attack by a man with a samurai sword that left him near death in an Ann Arbor, Michigan, apartment.

The attack and Bennett’s survival has captured the attention of filmmaker Alex Leyton who is raising funds for a documentary, “A Life Abstract”, about Bennett and his art that gives him resiliency and strength. Leyton met Bennett four years ago through his wife, Katherine, when she was taking an art class from Bennett at St. Michael’s School.

Once Leyton got to know Bennett and heard his “pretty far out story” he thought about making a movie. “When you come across a story like that, you need to find an approach to tell it. I figured the best thing I could do for Bob is tell his story through a documentary — put his persona in its true form,” Leyton said.

“It is a story of inspiration, which will culminate in Bob’s New York art show this summer,” said Leyton, who moved to Tucson in 2011 and began his production company Lucuma Film with his wife. Leyton previously worked in New York and Los Angeles on movies, commercials, music videos, concert tours and independent films.

During a recent visit with Bennett, it was difficult for him to focus as he talked about the attack on May 12, 1974, in a friend’s basement-level apartment.

At the time, Bennett was a 32-year-old teacher who went out for a good time. He met a friend at a hangout bar near the University of Michigan and his would-be attacker, Johnnie Lee McGhar, was sitting with his friend. McGhar was an acquaintance.

Eventually, McGhar ended up with Bennett in the apartment where Bennett was staying. Bennett said McGhar became aggressive and began asking for money. He gave him the money in his pocket. McGhar searched Bennett’s wallet, and found no cash. He became angry because there also was no more food or liquor.

“Strange things began to happen,” said Bennett. “He dragged me here and there throughout the apartment. He punched me in the mouth, and I remember my bloody lips and several broken teeth.”

“I tried to get away but he didn’t let me. He grabbed a decorative samurai sword from the wall and began playing with it, and then he started swinging and slashing,” said Bennett who at one point hid under a table.

“He swung the sword and sliced my left arm to the bone. He cut all five fingers to the bone on my left hand. He cut my thumb off.

“He swings the sword into my head and when he yanks it out, a chunk falls out of my head,” said Bennett, describing the horror. He continued recalling the assault, repeating several times that McGhar nearly severed his left arm. He also received slashes to his stomach, right leg and an ear.

Bennett did not lose consciousness. After the 45-minute attack, McGhar left with clothing, jewelry and the sword.

Bennett made it out of the apartment and screamed for help. His cries were heard by a couple. He remembered the woman became hysterical when she saw his injuries, and authorities were called. Police and paramedics were dispatched and Bennett was taken to a hospital near death. He went into shock because of the amount of blood loss.

He was taken into surgery — the first of many — where he was sewn back together. While in a coma for weeks, Bennett said he heard a voice saying: “You can come back but it will be difficult. You are not 50-50. You’re mostly dead.”

When Bennett woke up, he said he saw images of McGhar’s “contorted face. He looked like the devil.”

The journey of healing and survival began when he was able to pick up a pencil and draw, something he desperately needed. “My head was as big as a watermelon. I had thousands of stitches, inside and out. I stayed months in the hospital. I was in a body cast, and in a wheelchair,” said Bennett, receiving treatment for years. He stayed in Flat Rock, about 35 miles southeast of Ann Arbor.

Eventually McGhar was arrested and charged with assault with intent to murder. He was convicted and is serving life at a Michigan Department of Corrections prison. He is 63.

“I survived because of God. It was the Holy Ghost,” said Bennett, an Episcopalian who attends St. Michael’s & All Angels Church at 602 N. Wilmot Road.

He previously lived in Tucson in the 1950s with his family who moved here because of his sister’s health. He attended Alice Vail Middle School and Tucson High School before moving in 1956 with his grandmother to Flat Rock. Bennett said he was a young teen who was coming out as gay and his grandmother, a nurse, accepted him, loved him and supported his decision while his father did not.

After graduating high school, his grandmother helped him financially with his education, and he attended Albion College, a private liberal arts college in Michigan, and graduated with degrees in art and history. He then attended the University of Michigan and Eastern Michigan University and received master’s degrees in art education, fine arts and guidance counseling.

Bennett has exhibited and sold his art in the United States and around the world, including the Waterworks Art Gallery in Montana, the Detroit Artist Market in Michigan, and Galerie Le Minotaure in Paris, France, and in Ann Arbor.

In 1996, Bennett moved permanently from Ann Arbor to Tucson and continued painting and teaching art. He also was an artist in residence at the University of Arizona’s ArtWorks and worked with people with developmental disabilities and helped those suffering with PTSD.

Now, Bennett who paints in his small apartment on Tucson’s east side or at Leyton’s studio in his home near Sabino Canyon, is preparing pieces for the show this summer in New York City.

His art helps him heal the brokenness within and brings him joy that he wants to share with others.

The attack that occurred a lifetime ago was like “being hit by lightning. You never get over being brutalized like that. It is something that stays with you everyday,” said Bennett.

It is Bennett’s passion for art that sustains him.

Filmmaker Alex Leyton is the director and cinematographer of Lucuma Film and is raising funds for a documentary of Tucson artist Bob Bennett.

For information about the fundraising go to www.lucumafilm.com/a-life-abstract-proposal

To watch the trailer of the documentary "A Life Abstract" go to www.lucumafilm.com/a-life-abstract

La Placita Village, the colorful and multi-storied structure in downtown Tucson, is being torn down to make way for market-rate apartments. It…

Tips from Tucson Fire Department to keep your home safe

Black and White photos of snow on Mt. Lemmon, Catalinas

View photos of snow on Mount Lemmon that date back to the 1950s.

Artists' creations will be placed up for auction.

New record "Pluto" shows off a more rock-edge to singer-songwriter.

In 1974 Bob Bennett was attacked with a Samurai sword by a man he just met who then robbed him. Bennett used art to help him heal. A local fil…

The father of the child told police that he put blankets on top of the baby to muffle the sound of its crying.

The annual Give Kids A Smile day will offer free dental care to Tucson children from 8 a.m. to 4 p.m. on Saturday, Feb. 10.

You can get on the library waitlist… and try these similar titles while you wait!

The small department has been asked starting next month to shift from four-member crews  to three person crews, as the department deals with the city's budget problems. 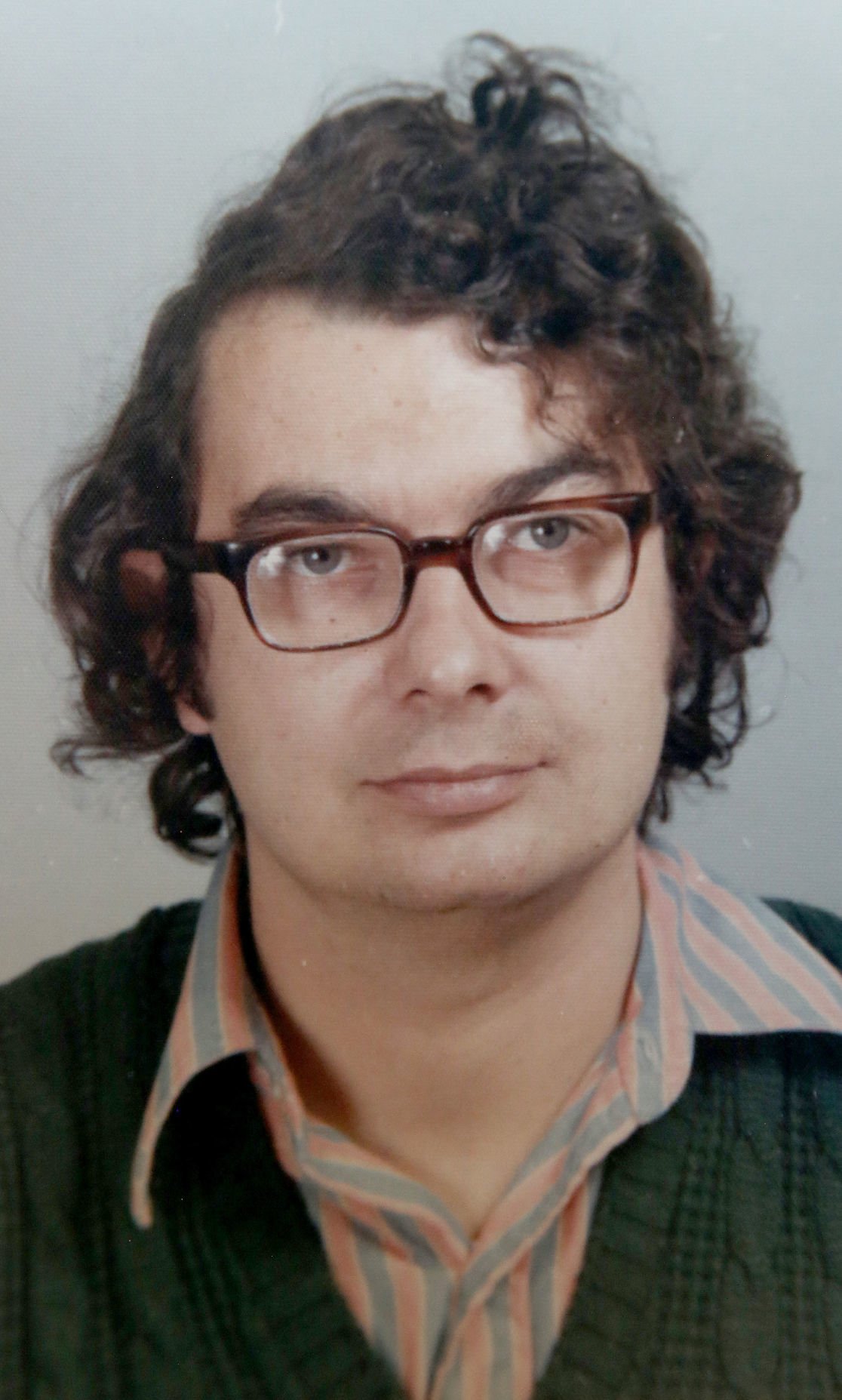