A panoramic view compiled from photos taken by the Perseverance rover shows the landscape of Mars. The Planetary Science Institute, a Tucson-based group, unveiled a map of ice deposits that could one day help travelers to the red planet. 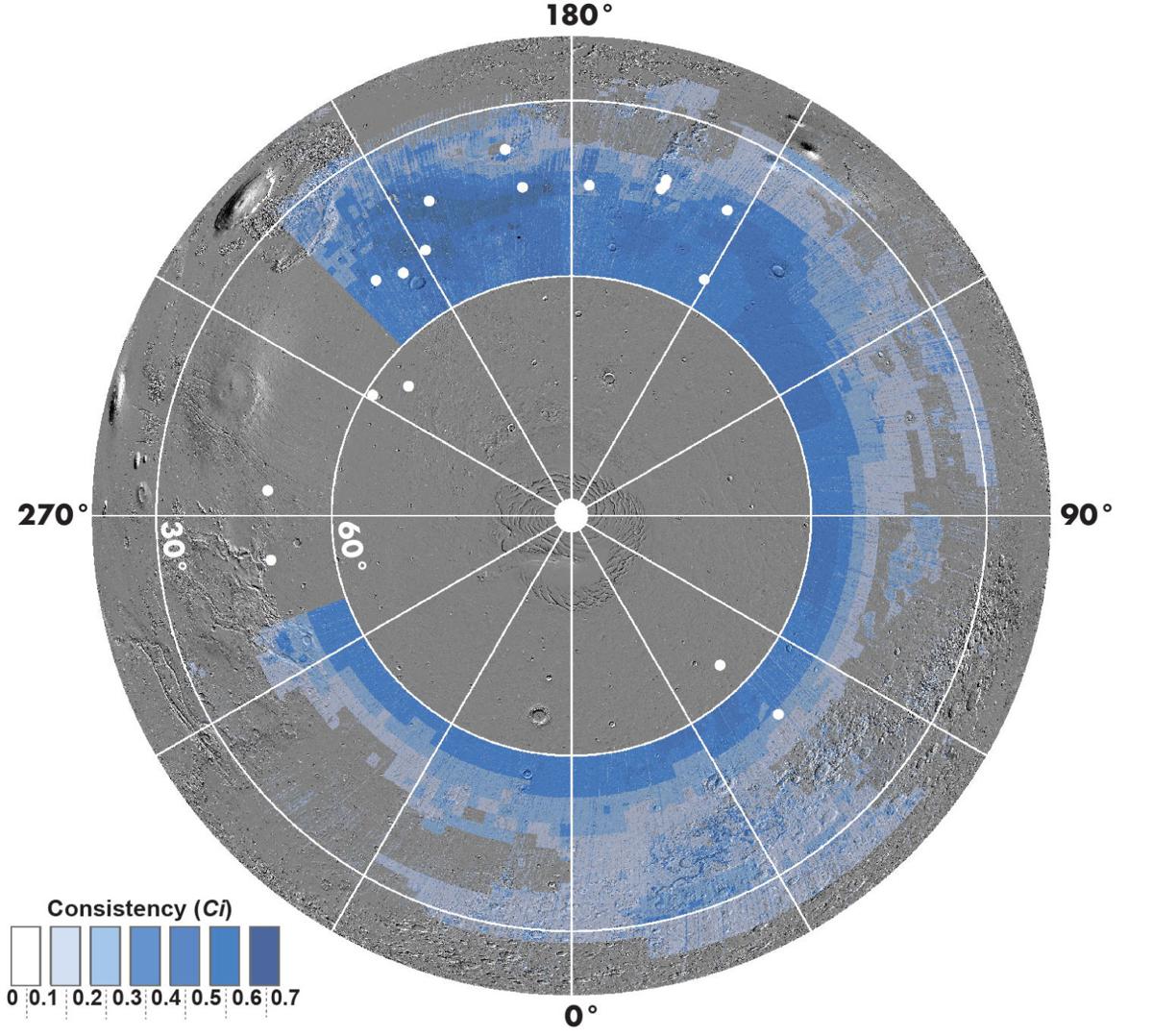 An “ice consistency” map of Mars shows the possible location of water ice within 15-20 feet of the surface. 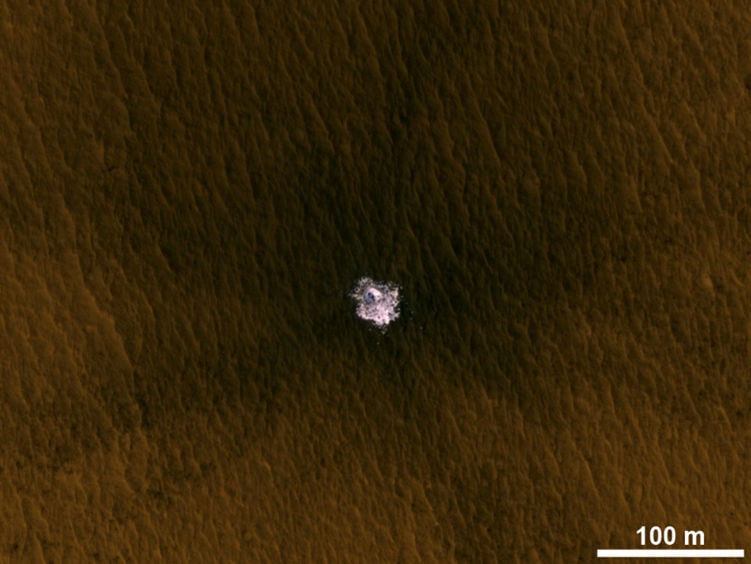 A meteorite impact that excavated this crater on Mars exposed bright ice that had been hidden just beneath the surface. Such “ice-exposing” impacts are rare. 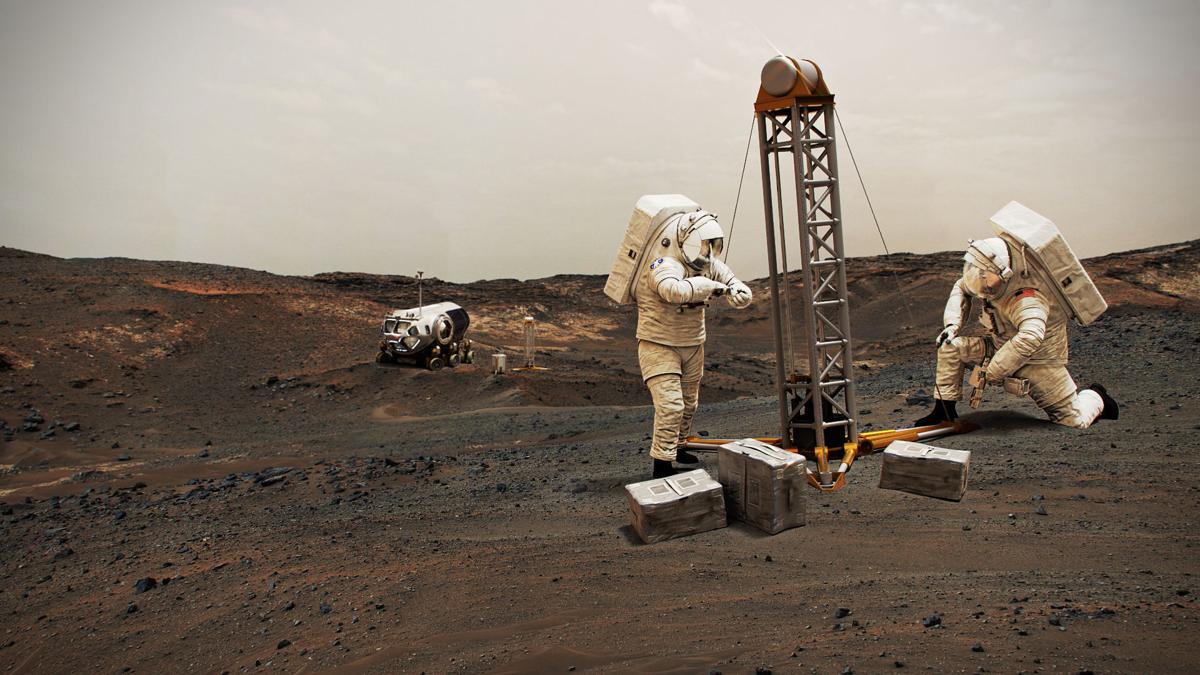 NASA astronauts on Mars in this illustration. 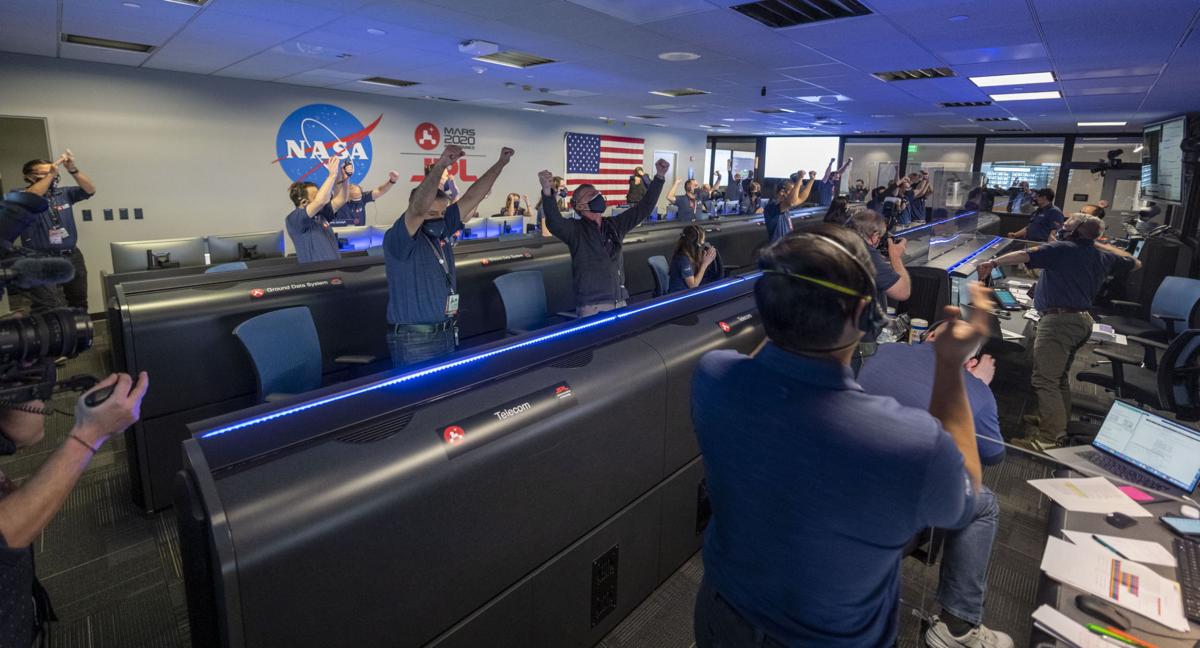 Members of NASA’s Mars 2020 Perseverance rover mission were jubilant on Feb. 18, 2021, after the spacecraft successfully touched down on Mars. They are in Mission Control at the Jet Propulsion Laboratory in Southern California.

If NASA’s latest Mars rover ever finds itself in need of a drink of water or a snow cone, the Tucson-based Planetary Science Institute can help with that.

A team from the private nonprofit research organization recently unveiled the most complete map yet of accessible water ice deposits on the red planet.

The map probably won’t be of much use to the Perseverance rover, which prefers to keep its wheels dry, but it could be a literal lifeline for the first human visitors to Mars one day.

“We’re looking at it from a resource point of view,” said Gareth Morgan, a senior scientist for the institute in Washington, D.C.

Nearly every scenario for landing people on Mars involves tapping into the planet’s supply of water ice to sustain the crew and produce fuel for the return trip to Earth.

“Fortunately, Mars is a very icy planet,” said Morgan, who is heading up the research with fellow scientist Nathaniel Putzig.

The project is called Subsurface Water Ice Mapping, or SWIM for short. It is being funded by NASA and managed by the Jet Propulsion Laboratory in Pasadena, California.

The goal is to look at ice on Mars in a holistic way while testing the limits of those existing datasets, he said.

The red planet has huge deposits of permanent ice near its poles, of course. But just like on Earth, those parts of the globe are bitterly cold and subject to long periods of darkness, making them unsuitable landing sites.

So far, Morgan, Putzig and their team have identified several promising spots in the mid-latitudes of Mars’ northern hemisphere where buried ice deposits are likely to be found within 15-20 feet of the surface.

Morgan described that area as the “Goldilocks zone,” where the ice is stable and shallow enough to be dug up but there is still enough sunlight to generate solar power and keep warm.

Their findings were published Feb. 8 in the journal Nature Astronomy. The paper summarizes the first phase of the SWIM analysis, which took a team of about 10 researchers roughly six months to complete.

It’s painstaking work that involves scouring pictures of the Martian surface in search of landforms that look like they were created by ice or might contain it.

For a similar analysis on Earth, Morgan said, scientists could simply double-check their work by traveling to the places on their map to confirm whether the ice is really there. “Ground-truthing” their findings on Mars is a lot more difficult, he said.

One way to confirm the presence of ice is by examining the craters left by recent meteor strikes, but such “ice-exposing impacts,” are rare, Morgan said.

More data is needed before scientists are able to identify specific landing sites where astronauts can reliably find the water ice they will need to survive on the surface and get back home.

To that end, NASA and the space agencies of Canada, Italy and Japan announced plans earlier this year to develop a robotic ice-mapping mission to Mars that could be ready to launch as early as 2026.

Luckily for NASA, Perseverance doesn’t require access to water. In fact, such rover missions typically stick to the driest parts of Mars, and not just to avoid getting stuck in the mud.

Morgan said NASA adheres to strict planetary protection policies designed to prevent contaminating other worlds with terrestrial organisms and organic materials. Since water is the most likely place where extraterrestrial life might be found, robots from Earth are careful to avoid such areas, he said.

That shouldn’t be a problem for Perseverance. According to Morgan, the spot where the new rover touched down on Mars on Feb. 18 is just over 800 miles south of the nearest ice, as mapped by SWIM.

That’s a mighty long drive on a planet without a single road, especially for a robot with a top speed of a little less than 0.1 mph.

From Tucson to Mars

The Planetary Science Institute was founded in Tucson in 1972. It now ranks as the world’s largest non-governmental employer of planetary scientists.

Several PSI scientists are involved with various instruments on the Perseverance rover, now on Mars. They include:

• Rebecca Ghent, co-investigator on RIMFAX, an imager that uses radar waves to probe the ground under the rover;

• Cynthia Little, a technical staff collaborator on SuperCam, a laser micro-imager that can analyze the chemical composition of rocks and detect the presence of organic compounds from a distance;

• Matthew Siegler, a participating scientist on RIMFAX and MEDA, which will provide measurements of temperature, wind speed and direction, pressure, relative humidity and dust size and shape on Mars;

• And Aileen Yingst, co-investigator on SHERLOC, a spectrometer that uses an ultraviolet laser to determine fine-scale mineralogy and detect organic compounds.

NASA has selected a University of Arizona researcher, who at age 30 is early in his career, for a $20 million mission to study the "gaseous halos" that surround galaxies.

A panoramic view compiled from photos taken by the Perseverance rover shows the landscape of Mars. The Planetary Science Institute, a Tucson-based group, unveiled a map of ice deposits that could one day help travelers to the red planet.

An “ice consistency” map of Mars shows the possible location of water ice within 15-20 feet of the surface.

A meteorite impact that excavated this crater on Mars exposed bright ice that had been hidden just beneath the surface. Such “ice-exposing” impacts are rare.

NASA astronauts on Mars in this illustration.

Members of NASA’s Mars 2020 Perseverance rover mission were jubilant on Feb. 18, 2021, after the spacecraft successfully touched down on Mars. They are in Mission Control at the Jet Propulsion Laboratory in Southern California.