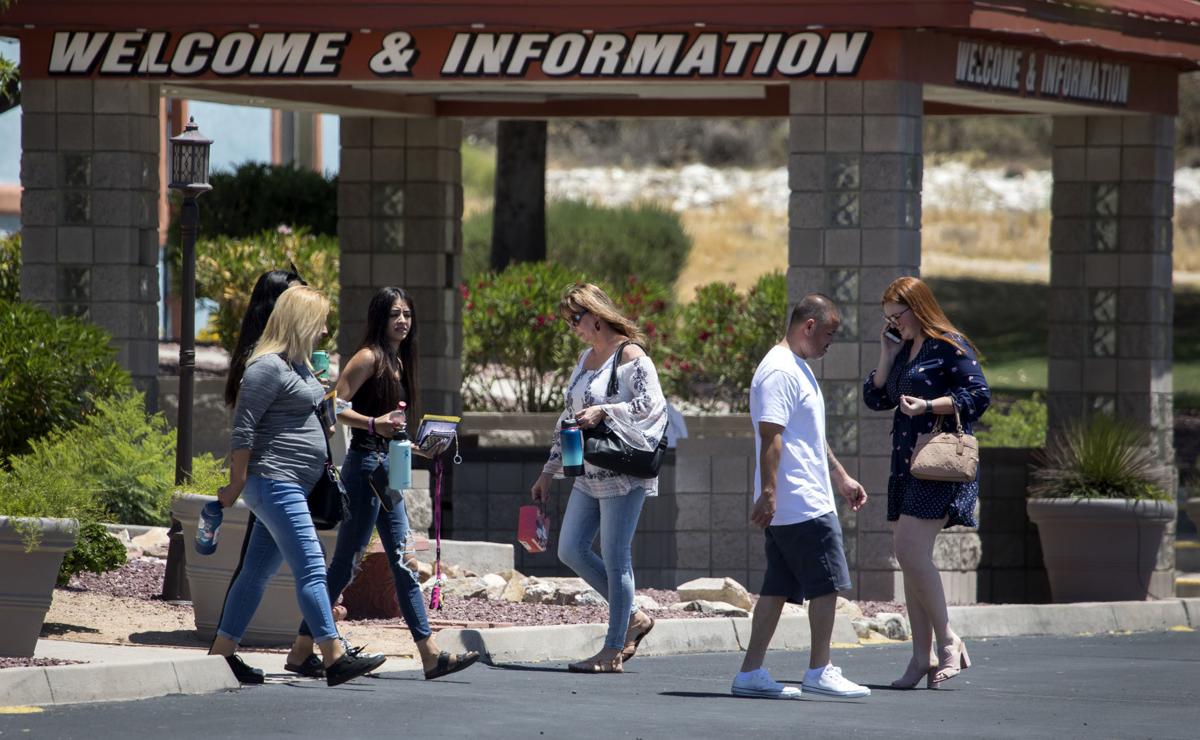 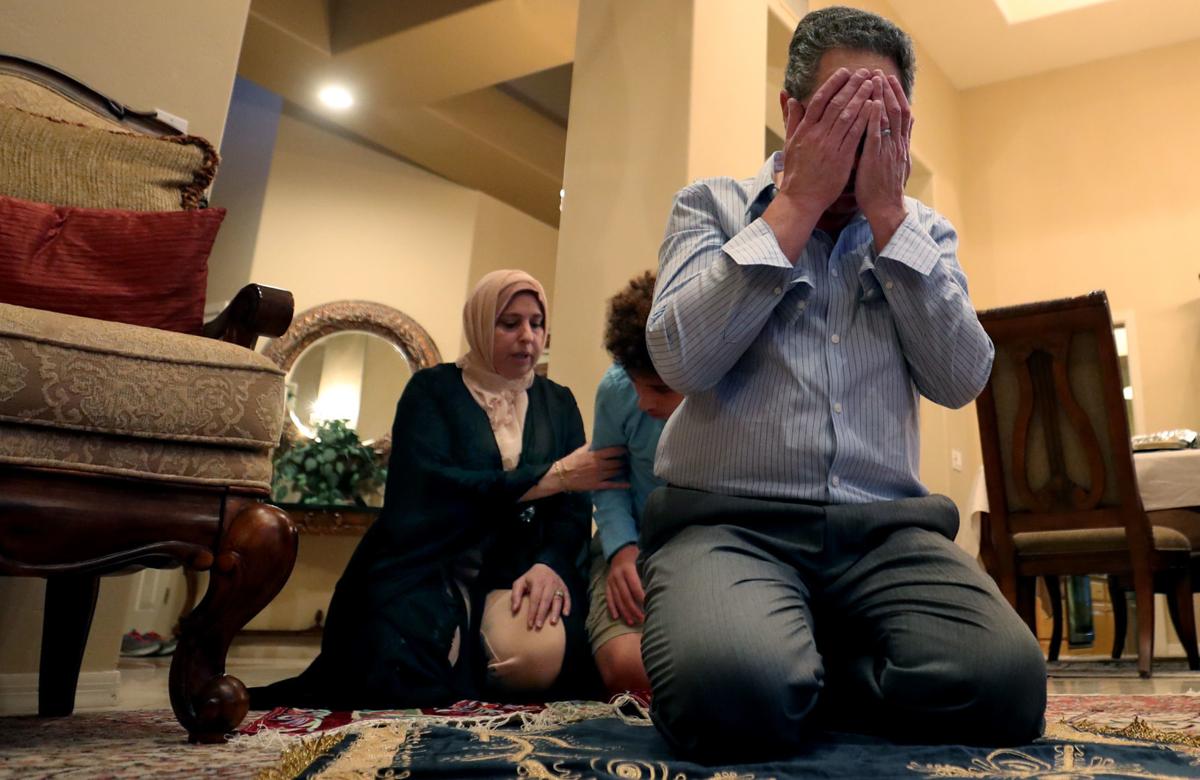 During Ramadan, Ziad Hemzawi leads his wife, Rania Kanawati, and son, Omar Hemzawi, in prayer at their home before breaking their day’s fasting with the evening meal. 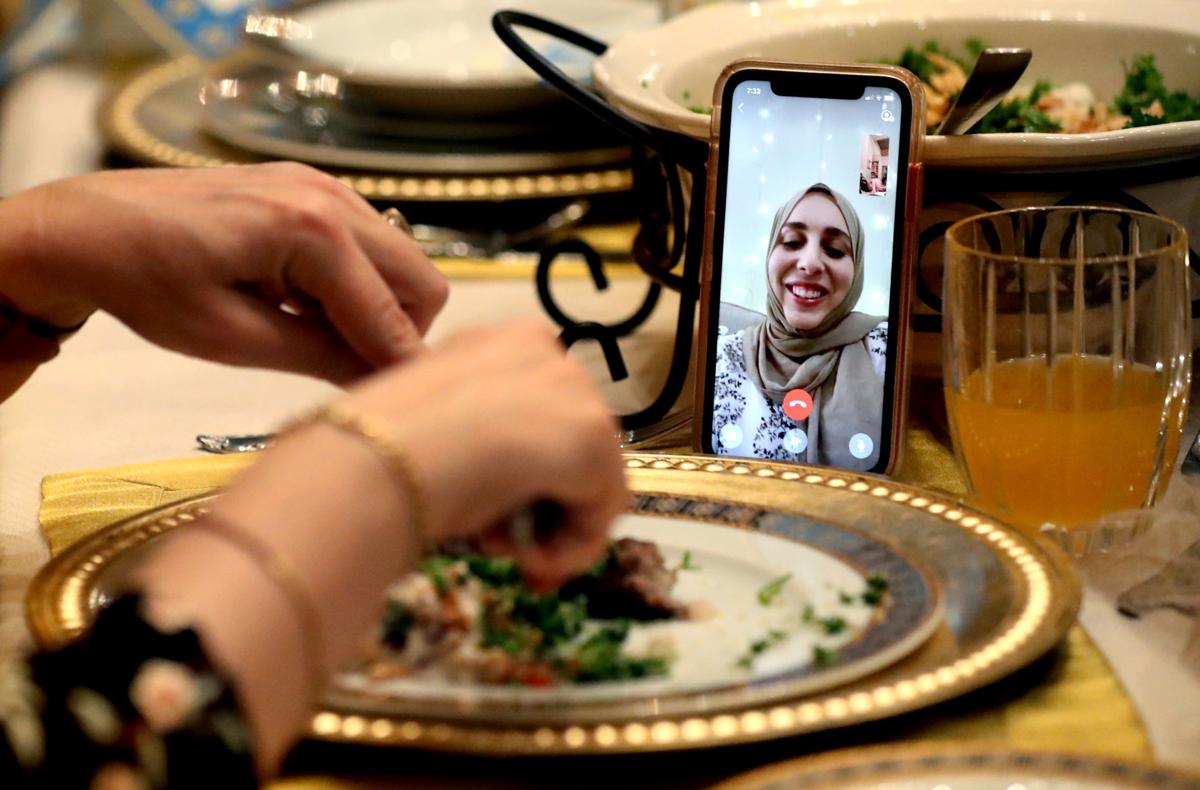 Via her cell phone, Sarah Hemzawi, in Raleigh, N.C., attends the evening meal with her parents as part of their Ramadan ceremonies at their home.

As some businesses across the state reopened Friday and others prepare to do so Monday, religious centers and churches here continue to weigh the benefits and risks of welcoming back their followers.

Religious gatherings have been listed as a constitutionally protected essential activity in Governor Doug Ducey’s executive orders regarding activity restriction during the coronavirus pandemic, but most religious organizations here agreed to temporarily close to avoid large gatherings that could help spread the disease.

However, one church in Tucson held services last weekend and more are doing so today.

After communion, people refrained from shaking hands or hugging but some stood close to each other as they talked outside the church.

No one leaving the church on that day wore a mask.

“It’s important to be here”

The Pischkes have been going to The Bridge for 16 years, since Kallisto was 3 years old, they said. They were glad to be back last Sunday after six weeks of tuning into online services.

“It was so needed, spiritually and mentally,” Martha Pischke said.

Families kept a 6-foot distance during the service, the daughter said.

The Pischkes said they weren’t worried about going back to church. Kallisto Pischke is a patient care technician at a hospital in Tucson and said going to church is nothing compared to having to work.

“It’s important to be here because, well, we’re family,” she said. “Even though we’re not blood-related, we’re spiritually related because we’re Christians.”

She said the church brings them together as Christians, and watching a service online is not the same as attending service in person.

Martha Pischke echoed her daughter’s sentiment, saying the unity of attending the church and being together allows them to be more in touch with the service.

“I was so stressed before, and now coming back it’s like a relief. It’s something that I needed,” Martha said. “I needed to be here because it was affecting me. I went out of that so needed path that gives me tranquility, that gives me that peace that nobody else can.”

Kallisto Pischke, who works at the church’s food court, said they’re required to wear masks and gloves while working.

The church declined to talk about the services, saying its pastors were too busy.

“This past weekend BCC (Bridge Christian Church) did reopen its campuses and all went well,” the church said Wednesday in an email in response to an interview request. “We had many on campus and many watching live on YouTube.”

In a video posted April 29 on the church’s Facebook page, David McAllister, founder and senior pastor of the church, told viewers they can choose to attend church in person or continue to watch services online, but the choice should be up to each individual.

“We really are trying to do something that we believe is appropriate. In our country, it’s always been the case, and that is that you’re supposed to be the adult. You’re supposed to be able to make those decisions for yourself,” he says in the video. “It’s unclear why our nation continues to act like we’re children and that we can’t make informed decisions for ourselves, but they do continue to do that. So please understand we want this to be completely up to you.”

When Faith Community Church on Orange Grove Road near La Cholla Boulevard reopens this weekend, things will be a little different.

Seats are being grouped for various family sizes, with six feet between each row and between each group of chairs, said Geri Laing, the pastor’s executive assistant.

Ushers will hold offering buckets instead of passing them around. The church will offer masks and gloves to staff members and to anyone in the congregation who would like to wear them, Laing said.

The church serves between 800 and 1,000 people every weekend during three services — one Saturday night and two Sunday morning.

The last time Faith Community held service at the church, the weekend of March 21, about 300 people attended. Laing said that’s about how many people the church is expecting on Mother’s Day weekend.

“We’re getting a very good response,” Laing said. “We know that obviously some people are going to want to continue watching the services from home for a while.”

Church staff has removed about half of the seats, leaving a capacity of 312 people per service.

The staff is sanitizing pens and visitor bibles, and there are sanitizing stations available at the church.

Eight staff members will also be wiping down seats and sanitizing surfaces in between each service, Laing said.

“We’re using every means to the extent feasible with the physical distancing, and we’re sterilizing,” she said. “I think we’ve got a good plan underway.”

“As such, the Executive Order encourages individuals to act responsibly based on individual circumstances. The flexible language also helps ensure that appropriate leeway is provided to individuals engaged in activities afforded heightened protections under both federal and state constitutions,” the opinion states.

Laing said Brnovich’s opinion was great news for the church. She said keeping the church open is a biblical responsibility.

“Biblical scripture is our first and main priority,” Laing said.

Pantano Christian Church with a congregation of about 3,500 people will stay closed until June, at best, said Glen Elliott, lead pastor at the church.

Elliott said he has been communicating with Governor Ducey’s Office of Youth, Faith and Family and with the United Pastors of Arizona and has been monitoring health guidelines to stay informed about when it will be safe to open the church campus again.

Phase 2 will allow gatherings of 50 people, but will still be too complicated for Pantano Christian to coordinate in-person services, as each of its three services hosts more than 1,000 people on average, Elliott said.

“Can you imagine the incredible challenges we’d have just cleaning every classroom for kids between every service? And then cleaning doors, cleaning bathrooms, I mean it would take an army of people just to do all of the sanitation that would be required,” he said.

While they are legally exempt from Ducey’s orders, Elliott said the church conducted a survey and found that about half of its congregation did not yet feel comfortable going back to church.

“At this stage it’s near impossible to open,” Elliott said. “Some would be there in a heartbeat, but many people won’t be coming.”

Elliott recognized that smaller churches might reopen sooner and that every church’s situation is unique.

Pantano Christian chose to close early in mid-March, as coronavirus cases in Arizona were ramping up quickly, he said. The sooner they closed, the sooner they were able to offer all of their services online, Elliott said.

Students are connecting with the church online every weekday through social media apps such as Instagram and Snapchat, and the church’s more than 100 small groups are also meeting online.

“I wouldn’t say it’s ideal, and certainly everyone is ready to be able to meet physically again,” Elliott said. “But, again, we have to do it when it’s safe and we’re not putting others in danger.”

The Catholic Diocese of Tucson is also remaining closed for the foreseeable future as they follow state guidelines, said spokeswoman Steff Koeneman.

Praying at home during Ramadan

In past years, Rania Kanawati and her family would spend most May nights at the Islamic Center of Tucson, joining their Muslim community in feast and special prayer.

This year’s Ramadan is different.

Ramadan, which started April 23 and lasts through May 23 this year, is a holy month during which Muslims fast every day and eat after the sun sets. Fasting is a way for Muslims to show self-restraint and discipline. After sunset, Muslims traditionally gather socially at a mosque to break fast and pray.

The Islamic Center of Tucson does not plan to open anytime soon, and the center’s board of directors is taking into account CDC guidelines and advice from health experts, said Maria Molina, spokeswoman for the Islamic Center.

With a lot of elderly people in their community, the board does not believe they should reopen just because the state is doing so, Molina said.

“Our priority has to be with the most vulnerable people in our community,” she said. “And because of that we’re just going to be monitoring the situation and reopening when it feels safe.”

The pandemic has been especially difficult on Muslims who have had to stay away from the mosque and at home during the holiday month in order to protect themselves and their community, Molina said.

For Kanawati, the pandemic has been an opportunity for her and her family to practice what Ramadan is all about.

Fasting is about learning to be patient and listening to God, she said. And breaking fast is about finding happiness.

This year, Kanawati is reminding herself that spending time with family is important.()

She stays home helping her 14-year-old son with school, preparing their nightly meal and connecting with her family overseas and with her daughter who recently got married and moved to North Carolina. Her husband continues to go to work, she said.

She enjoys cooking and has promised herself that once life goes back to normal after the pandemic, she will continue to spend quality time at home with her loved ones.

Breaking fast and praying at the mosque allowed them to feed their community by hosting meals, to care for each other and see how everyone in the Muslim community was doing, Kanawati said.

“Being in the mosque and praying together is like putting your hearts together,” she said. “You ask about people you haven’t seen for a while.”

She said it’s something the community looks forward to every year.

But Kanawati understands that staying home and not meeting at the Islamic Center like they used to is also a way of showing they care about each other as a community.

“When you care about people, you care about their health, too,” she says. “So at this time, yeah we are sad that we are separated, and we are sitting home and doing this, but it’s a way of showing caring, too.

“When I care about people, and I love them I really don’t want to spread any sickness to anybody.”

Coronavirus cases in Arizona, mapped by county: May 9

Diocese of Tucson to begin phased re-opening of Catholic churches

Protocols include social distancing, limiting capacity, proper cleaning, the use of face masks, hand sanitizer and other limitations on how Mass may be celebrated.

Concerns for older worshippers who are at higher risk for contracting the virus, and are most likely to attend services, are at the forefront for Tucson churches.

During Ramadan, Ziad Hemzawi leads his wife, Rania Kanawati, and son, Omar Hemzawi, in prayer at their home before breaking their day’s fasting with the evening meal.

Via her cell phone, Sarah Hemzawi, in Raleigh, N.C., attends the evening meal with her parents as part of their Ramadan ceremonies at their home.