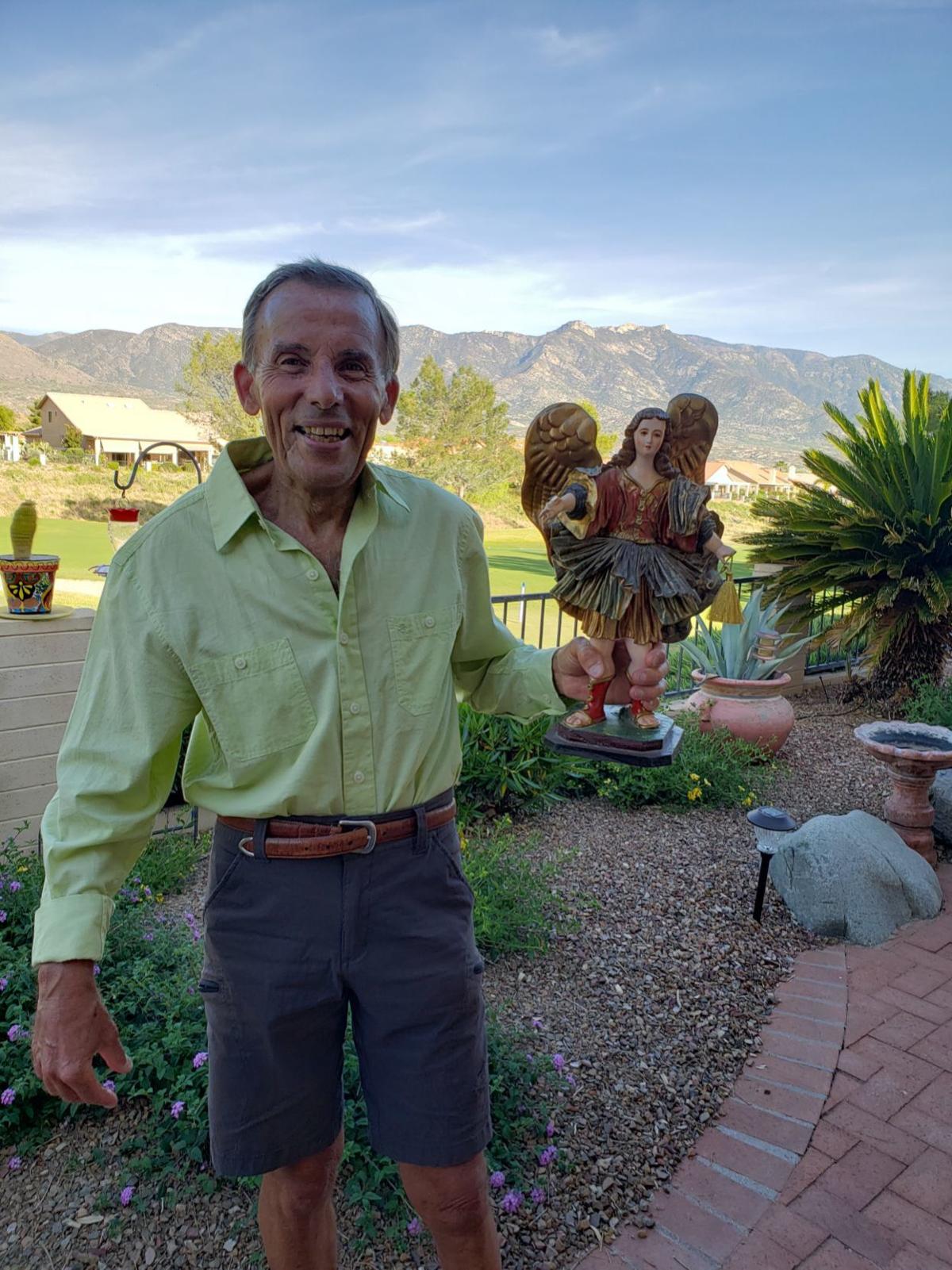 Dr. Joseph Rizza poses in the yard of his SaddleBrooke home with a statue he jokingly refers to as his “guardian angel” after finally returning home from his cruise ship ordeal. 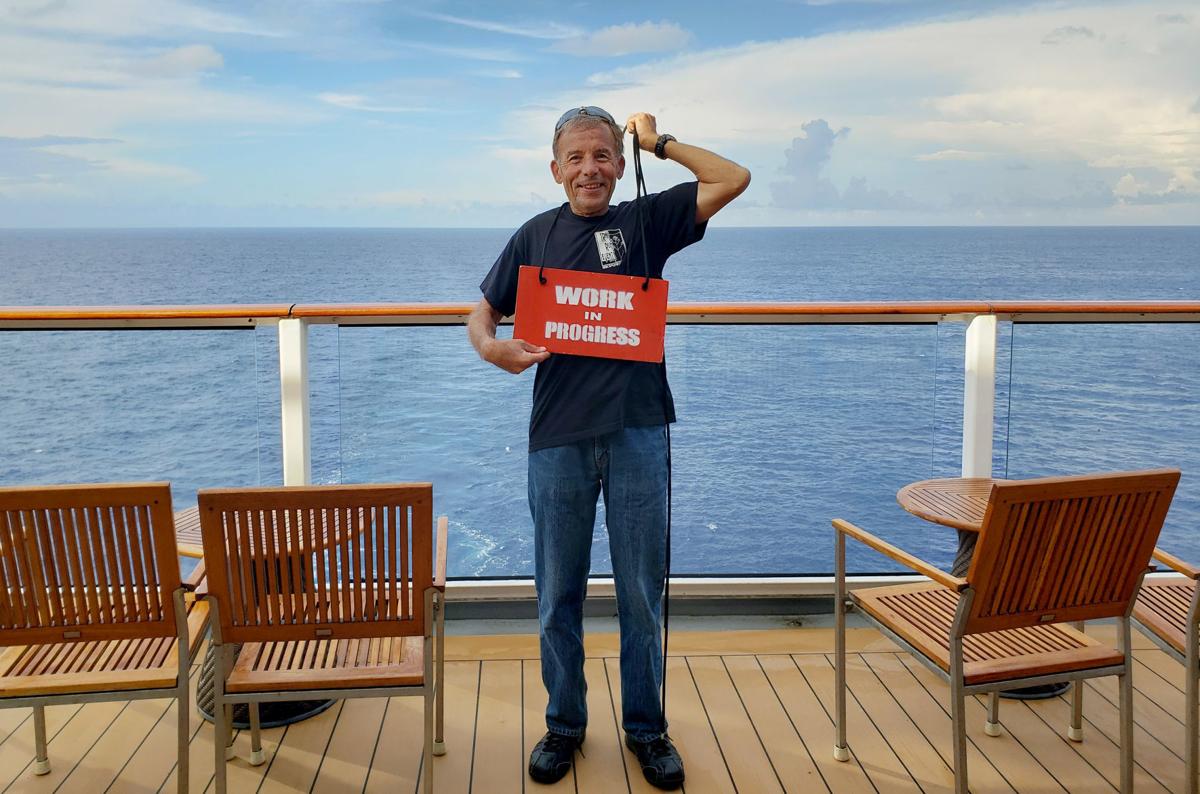 Dr. Joseph Rizza left Tucson on March 12 to fill in as an emergency, mid-cruise replacement doctor. He finally returned on April 27.

The castaway cruise ship physician returned home to Tucson on Monday afternoon, after more than six weeks stuck at sea by the coronavirus pandemic.

His wife, Guje Olofsson, greeted him at the airport when his flight landed.

“She had no hesitation to kiss me, that’s for sure,” the 72-year-old said.

The two hadn’t seen each other since March 12, when Rizza left Tucson to join the crew of the cruise ship Celebrity Solstice in New Zealand as an emergency, mid-cruise replacement doctor.

It was supposed to be a five-day assignment, but he didn’t get to touch dry land again until Sunday in the Philippine capital of Manila.

Rizza said that without the help of a U.S. Embassy official named Kimberly Kelly, he probably would have been transferred to another cruise ship — the third since his journey began — to wait out 14 days of quarantine. Instead, Rizza said Kelly convinced the Philippine government to let him come ashore and go straight to the airport to catch a flight back to the U.S. by way of Qatar.

The journey home involved a long, slow trip across Manila Bay in a lifeboat, hours of waiting at the pier for his travel documents to be signed, and then a race to the airport in a military truck with its lights flashing and sirens blaring.

He said he was dumped on the curb in front of the airport, too late to catch his flight to Qatar, so he had to book himself on a flight to Incheon, South Korea, and on to LAX.

During his 10-hour layover at Incheon’s modern, mostly deserted airport, Rizza said he encountered three people camped out in the transit area — two women from Colombia who had been waiting three weeks to fly home and a man from the Congo who had been stranded there for two months.

“Obviously, some travelers have it worse than I have had,” he said.

His 10-hour flight from South Korea to Los Angeles had about 30 passengers on it. He then hopped a Southwest Airlines flight from LAX to Tucson.

“It was quite an odyssey, and I’m glad it’s behind me,” Rizza said. “I just feel sorry for all the other people who are still out there.”

Rizza said he didn’t do anything special once he finally made it back to his home in SaddleBrooke. He sorted through the mail that had piled up while he was gone, then went to bed a little earlier than usual at around 8 p.m.

A few hours later, he woke up in the dark with no idea where he was. He said he knocked over the lamp on his bedside table and tried to crawl back into bed on his wife’s side.

He’s feeling more settled now, though he’s still bothered by what he saw over the past six weeks. Rizza said the response to the coronavirus, especially by government officials around the world, has been completely unreasonable.

“They’re not using logic or compassion or sense,” he said. “It’s an extreme overreaction. The world has basically stopped.”

As soon as it starts back up again, Rizza said he plans to go back to work as a cruise ship doctor.

Next time around, though, Rizza said he will probably try to take her along with him so he won’t really care if he gets stranded at sea.

When last we heard from Dr. Joseph Rizza, the 72-year-old SaddleBrooke resident was stuck on board the Celebrity Solstice as it circled Australia on its way to Singapore.

Hubble, with Arizona scientists in big roles, 'changed the way we look at the universe'

When Hubble blasted off from Earth 30 years ago April 24, University of Arizona scientists were already working on its new set of eyes.

Dr. Joseph Rizza poses in the yard of his SaddleBrooke home with a statue he jokingly refers to as his “guardian angel” after finally returning home from his cruise ship ordeal.

Dr. Joseph Rizza left Tucson on March 12 to fill in as an emergency, mid-cruise replacement doctor. He finally returned on April 27.