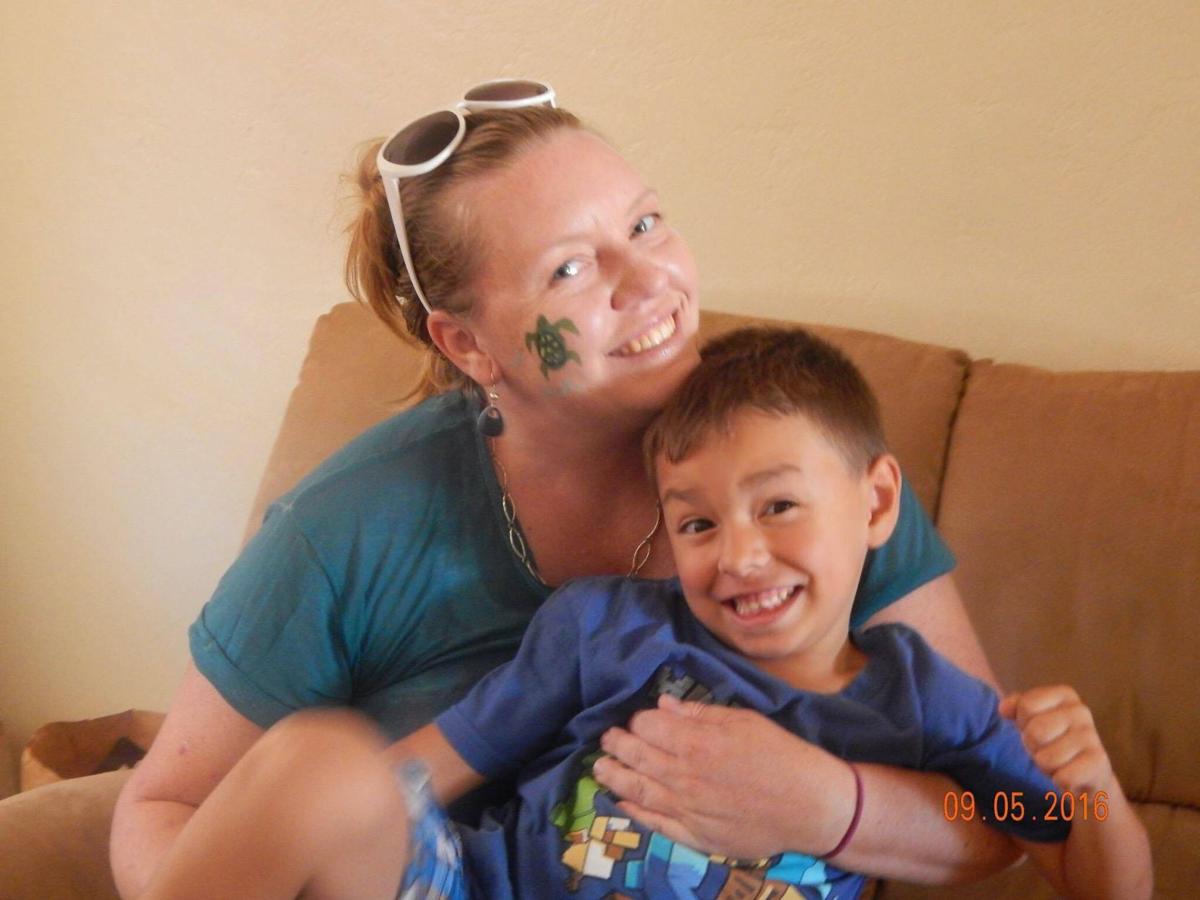 Anna and Ethan Mentzer, in a photo provided by a friend, were struck and killed by a car Wednesday morning. 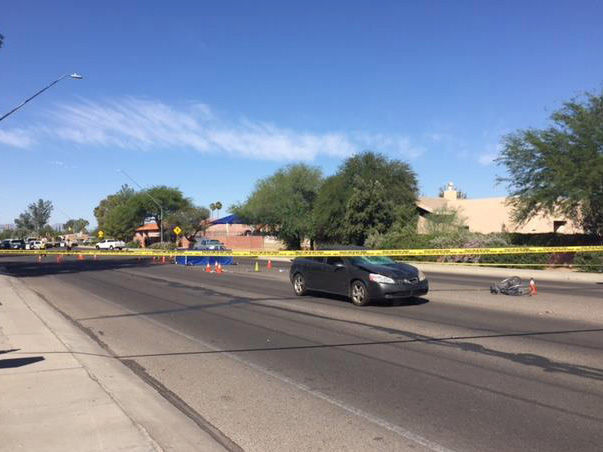 Tucson police and fire were on the scene of a fatal pedestrian crash that killed a mother and her son in midtown Wednesday morning. 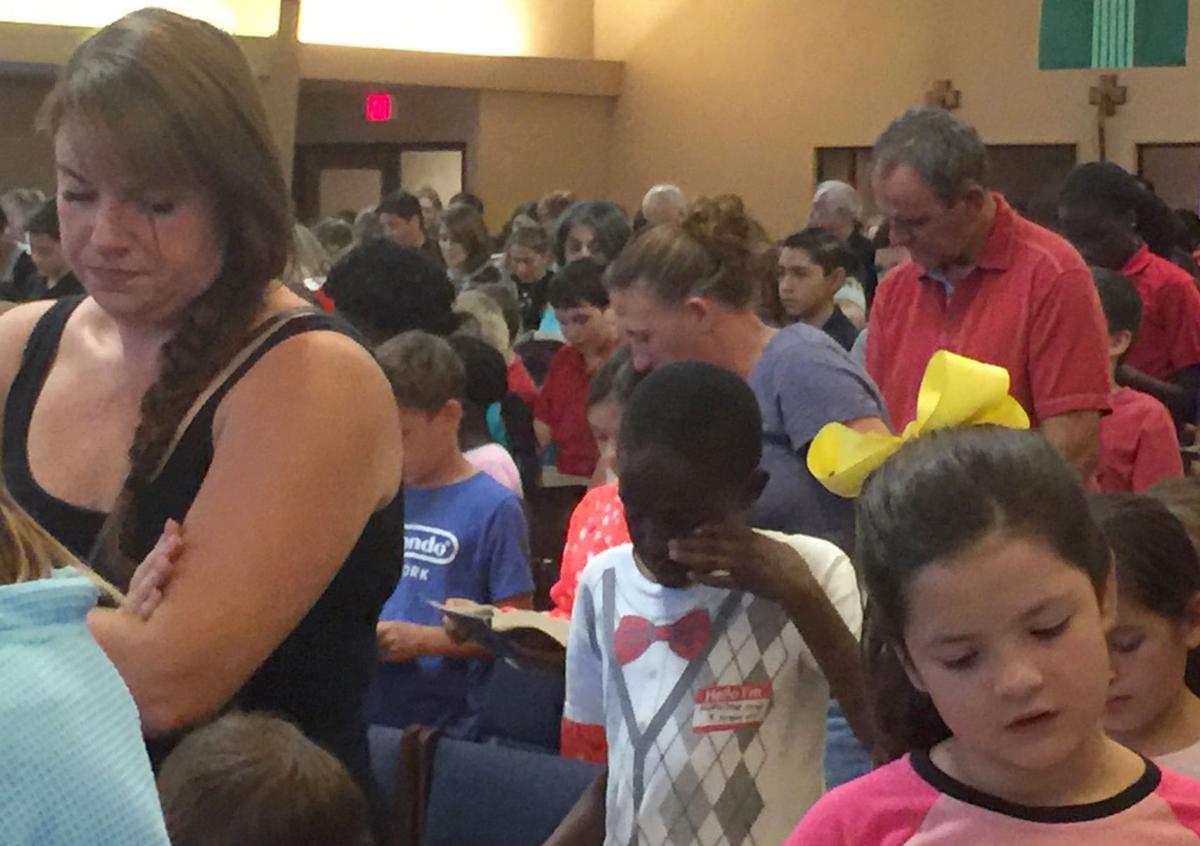 At the end of the day, St. Cyril of Alexandria School held a prayer service for students, parents and community members, with Bishop Gerald Kicanas in attendance.

A mother and her 7-year-old son, who were walking in a marked crosswalk on their way to his midtown school, were struck and killed by a car Wednesday morning.

The pair was crossing East Pima Street near North Swan Road at about 7:30 a.m. when they were struck by a car traveling east on Pima, said Officer Chris Hawkins, a Tucson Police Department spokesman.

The child was Ethan Mentzer, 7, a second-grader at St. Cyril of Alexandria, a school about a block from where he and his mother, Anna Mentzer, were struck.

Mentzer, a chef who had also graduated from St. Cyril’s, was walking her son to school. Their home is a couple of blocks south of the Catholic school.

Her older son, Eli, a fifth-grader at the school, was not with them because he was at home sick, said family friend Molly Bednar. Eli was in the care of Anna’s brother, Clement Mentzer, who also lives in the neighborhood.

Tucson Fire Department paramedics were the first to arrive at the crash and began treating Mentzer, a 37-year-old single mother, but she was pronounced dead at the scene.

Ethan was taken to Banner-University Medical Center Tucson where he died, said Hawkins.

Traffic detectives determined that the car was traveling east on Pima in the median lane, approaching North Mountain View Avenue. Mentzer and her son were crossing Pima near Mountain View in the crosswalk when they were struck.

The woman driving the car stayed at the scene and cooperated with detectives. She showed no signs of impairment, and no citations have been issued, Hawkins said.

Since January, there have been 24 pedestrian fatalities in the city — compared with 11 at this time last year — and six of those have occurred since Sept. 27, police data show.

Friends of Mentzer and her boys were trying to deal with the news late Wednesday.

“I am in total shock right now,” said Sarah Lamberth. “I talked to her recently, and she told me her kids were everything to her.

“Anna was always, always positive. When things were bad, she could always see the silver lining. She was a really beautiful soul,” said Lamberth, adding that the boys loved to camp with their mom on Mount Lemmon.

Friends said Mentzer had taught cooking classes at The Art Institute of Tucson and was sharing her love for cooking with her sons. She began teaching them about Italian dishes, said Lamberth.

“We would hang out together at birthday parties, and we would have play dates and take them swimming and camping.”

Bednar wrote in a Facebook post: “Love you Anna. Rest in Peace my friend. I promise to look after Eli for you.”

Daniel Ribbentrop, of San Antonio, Texas, said he first met Mentzer in 1999 after she graduated from Salpointe Catholic High School in 1998. She was attending Our Lady of the Lake University in San Antonio and received a bachelor’s degree and later moved to Phoenix to attend Le Cordon Bleu College of Culinary Arts in Scottsdale, he said.

“She was a wonderful person who worked several jobs to support her kids,” said Ribbentrop.

Then she began working for Tucson Unified School District in the food services department “where she really found happiness,” he said. “Everything was going her way for a change.”

“Everyone is heartbroken in the department,” said Michelle Valenzuela, a TUSD spokeswoman, as employees heard about her death.

“Anna was a very free spirit,” said Ribbentrop. “She was a big Grateful Dead fan. She was a modern hippie. Her sons were rambunctious, happy little boys. They were doing well in school, and she enjoyed spending time with them. Her kids were her absolute life.”

Ethan and his older brother were new to St. Cyril’s this year, principal Ann Zeches said.

“The St. Cyril’s school and parish family is working together to help everyone deal with this loss of the friend and classmate, and his mother,” said Steff Koeneman, a spokeswoman for the Roman Catholic Diocese of Tucson.

Counselors were on hand to speak to students Wednesday and will be back Thursday, Koeneman said.

At the end of the school day Wednesday, St. Cyril’s held a prayer service for students, parents and community members. An overflow crowd packed the pews and aisles at the church.

The Star’s Tim Steller contributed to this report. Contact reporter Carmen Duarte at cduarte@tucson.com or 573-4104. On Twitter: @cduartestar

Go Fund Me account set up for the family

The devalued Tucson pedestrian should get a chunk of our next big infrastructure spending.

The number of people who died in vehicle fatalities in Arizona last year increased slightly ﻿over 2012, but records showed significant increas…

City among few in Arizona that offers rebates.

She says she'll consider legal action if changes aren't made.

The third-year UA coach discusses the impact of the Terry Francona Hitting Facility and other topics as fall practice begins.

Lack of ice time has team cross-training with soccer balls on campus.

Tate’s life has changed to some degree since his record-setting performance at Colorado, but you’d never know it.

Wildcats making strides in women's basketball, but best may be yet to come

Coach Adia Barnes has lined up the nation's No. 2 recruiting class for 2018.

Warmer temperatures are still to come.

Microchips will be available from 8 a.m. to noon, while supplies last.

Deputies are looking for help identifying a man they say pummeled a Circle K clerk days after being refused a courtesy water cup.

Man killed in Wednesday night crash on Tucson's south side

Man was not wearing a seat belt.

At one point a man in the crowd demanded Councilman Steve Kozachik to "shut up."

Ajo Way will also be closed between 16th Ave. and Holiday Isle Blvd.

Arizona picked to win conference, but FBI investigation is real No. 1 at Pac-12 basketball media day

Sean Miller, Andy Enfield fended off repeated questions about corruption in college basketball, and how their programs became the subject of an FBI probe.

Arizona safety has been practicing, playing with team while facing charges.

UA needs consistency from its goalie, continued stellar play for subs to get back to the postseason.

Panthers can incredibly still make the playoffs by winning out. They'll face Palo Verde on Friday.

Daytime highs today will run 6 to 9 degrees above average.

Website says Sahuarita, Marana, Oro Valley are among the state's most successful cities

Sahuarita, Marana and Oro Valley residents may be onto something, since according to one website, they're living in three of the top 10 most s…

Social Security and You: What high school kids and you should know

I spent part of my 32-year career with the Social Security Administration as a public affairs specialist in San Diego. A big aspect of that jo…

Money Manners: Repaying a family loan with no obligation is a matter of principle

Tucson voters will decide whether mayor, City Council get a pay raise

Prop. 406 would increase the salary of the mayor $5,775 per month, and increase council member salaries from to $3,300 monthly.

Ask Amy: Newlywed wonders if there are weekends on the ranch

Money would be used to build seven fields, other amenities.

VW claims the term "clean" has no actual meaning. Arizona begs to differ.

YWCA Southern Arizona is spearheading #OperationHaboob, a campaign to get people to vote, to get involved, to push for change in policies and politicians.

The police union is adamant that staffing is a problem.

Teaching a dog-reactive dog to calm down on a walk

Fostering dogs and cats is a great way to help companion animals and save lives. It's a great volunteer opportunity for families who aren't ready for a 10 to 15-year commitment and for people who want to help animals, but need a little more flexibility in their lives.

Breezy conditions in the forecast for Sunday, Monday.

Man shot in brawl at Doc Holliday's Saloon in Tombstone

Victim was airlifted to a Tucson hospital.

I-10 eastbound lanes are expected to re-open about 10 p.m.

Tucson man killed in fiery crash on I-10 identified

Anna and Ethan Mentzer, in a photo provided by a friend, were struck and killed by a car Wednesday morning.

Tucson police and fire were on the scene of a fatal pedestrian crash that killed a mother and her son in midtown Wednesday morning.

At the end of the day, St. Cyril of Alexandria School held a prayer service for students, parents and community members, with Bishop Gerald Kicanas in attendance.