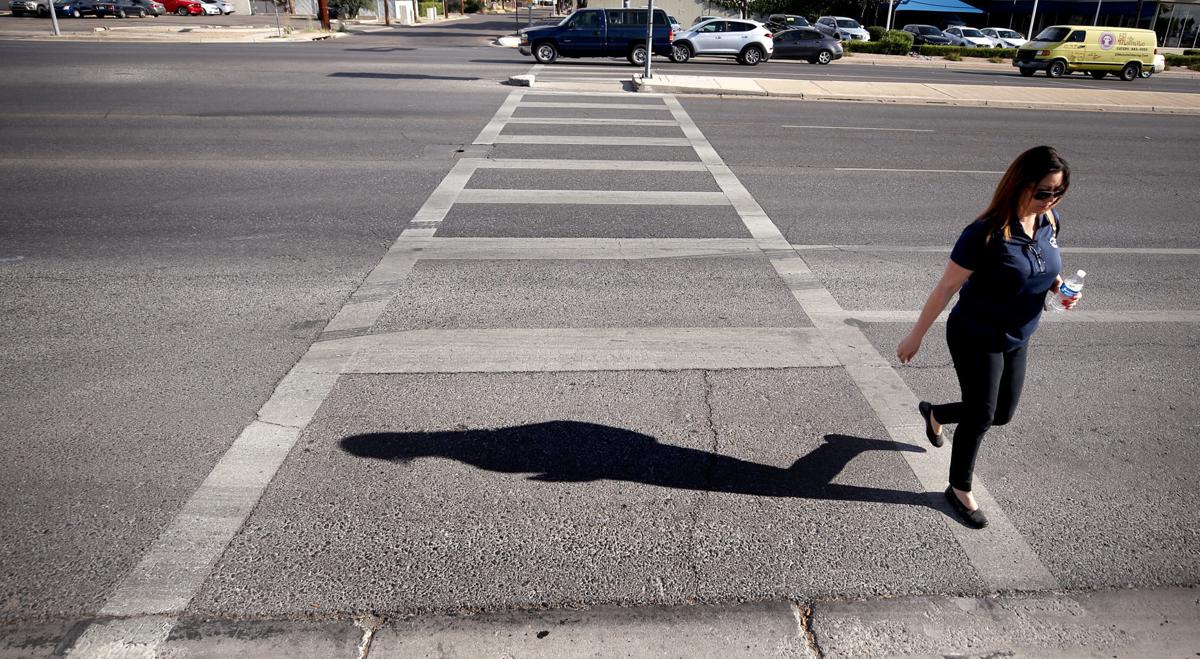 A policy being considered by the Tucson City Council could allow neighborhood groups to form self-taxing districts to pay for the installation of high-visibility crosswalks and new sidewalks, as well as for the refilling of potholes. 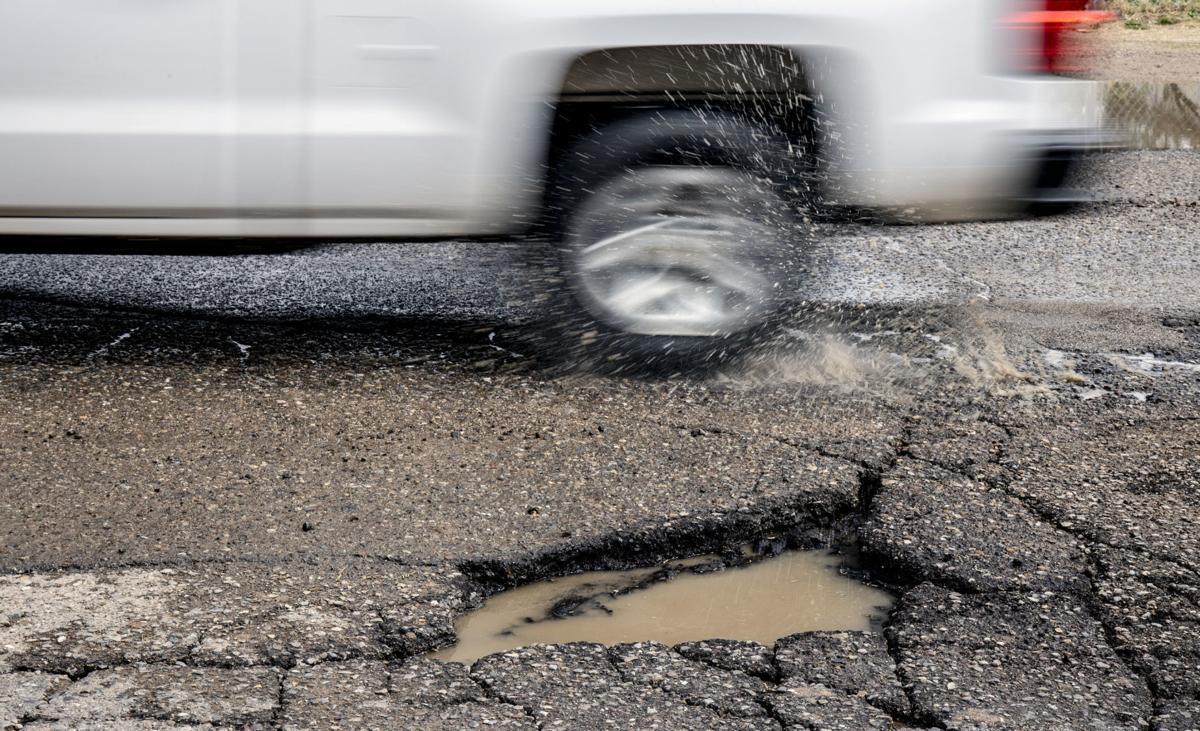 The city estimates there is a $500 million to $600 million backlog of street-maintenance projects.

Alison Hughes wants nothing more than to be able to ride her bike through her midtown Tucson neighborhood without having to worry about hitting one of the massive potholes that line most of her streets.

A proposed policy that has backing from the Tucson City Council may make Hughes’ wish come true, at a cost.

The policy would allow neighborhood groups to form self-taxing improvement districts to pay for the installation of high-visibility crosswalks, new sidewalks as well as some street repairs.

Such a move could help reduce the city backlog of street-maintenance repairs with a price tag in the hundreds of millions that has kept Tucsonans’ requests at bay.

The Rio Nuevo Multipurpose Facilities District, which is credited with helping to revive downtown Tucson, might be the best-known improvement district locally, but what the council is proposing would be much smaller.

For example, a neighborhood could — if 51% of homeowners agree to the additional taxes — pay for a High Intensity Activated Crosswalk (HAWK) beacon, which uses traffic lights to stop vehicle traffic, allowing pedestrians to cross busy streets safely.

City officials concede that while they’ve identified dozens of locations to install HAWK crossings, there is little available funding for the pedestrian safety devices.

Hughes supports the idea of what the city is calling a “Municipal Improvement District” in her Catalina Vista neighborhood, in the area south of Grant Road, between Campbell Avenue and Tucson Boulevard, north of Elm Street.

Hughes, a retired teacher, has struggled to persuade city officials to fix the disintegrating streets in her neighborhood, noting recent utility upgrades have only made the problem worse.

“I’m not wealthy,” she said. “I certainly am willing to pay for an increase in my taxes for my home for a few years.”

She added that as a board member of her neighborhood association, she’d be willing to go door-to-door to help get a majority of her neighbors to sign off on the taxing district.

Councilman Steve Kozachik supports the proposal, saying the entire city can benefit for every neighborhood that signs up for the program, as each project removed from the city’s backlog of deferred maintenance has a domino effect, effectively moving up other projects.

“Everyone seems to benefit from this thing,” Kozachik said.

Councilwoman Regina Romero supports the proposal but has some concerns about equity if the city offers matching funds, as is being considered, to neighborhood groups willing to tax themselves to fund improvements.

Well-organized neighborhoods in wealthier pockets of the city would be better suited to benefit from improvement districts, while poorer areas may reject the premise.

“You will not get many (poor) neighborhoods that need the improvements, that need the investment, to self-tax,” Romero said. “I like the idea of residents investing in their neighborhoods. There needs to be a longer conversation on how we are going to make it beneficial to everyone.”

The council last week gave the green light for the city staff to iron out a full-fledged proposal that would be brought back for final approval in a few weeks.

The staff cautioned that while improvement districts could make a dent in the estimated $500 million to $600 million backlog of street maintenance projects, not every dollar would go into improvements.

If a neighborhood approved a self-taxing district designed to pay for $4 million in improvements, for example, property owners would actually pay more over the lifetime of the district — usually a few years.

Costs include administration of the taxing district as well as interest on the bond, which would be slightly higher than if the city had bonded for the project.

City Manager Mike Ortega says he has some familiarity with municipal improvement districts, saying larger projects are more efficient with administrative costs and interest payments taking up a smaller percentage of the total cost.

“HAWKs aren’t cheap and we don’t have the money for them, and there is a long waiting list,” Rothschild said at a council study session.

Councilman Paul Cunningham said the additional funding could allow the city to upgrade basic crosswalks in between intersections that lack signage or lights, calling them dangerous.

“We could probably accomplish a lot of things that are on Tucson’s goal list,” Cunningham said. “We could put in more HAWKs or in some cases remove uncontrolled crosswalks, that are also dangerous.”

About $26 million has been proposed to be distributed evenly among the county’s five districts. Here’s a list of some of the major roads we may see fixed in the future.

In a lengthy Facebook post, Felicia Chew suggested that laws needed to be changed to "Classify attacks (verbal and physical) on law enforcement officers (and political persons) as hate crimes, and charge them as such."

The investigation stems from years-old allegations that Grijalva created a hostile work environment.

Green Party sues Tucson to stay on the ballot

The local Green Party has filed a lawsuit against the city of Tucson, asking a Pima County Superior Court judge to order that the party remain…

One month ago, Sam Nagy was the leading Republican candidate in the race to replace Tucson Mayor Jonathan Rothschild.

A policy being considered by the Tucson City Council could allow neighborhood groups to form self-taxing districts to pay for the installation of high-visibility crosswalks and new sidewalks, as well as for the refilling of potholes.

The city estimates there is a $500 million to $600 million backlog of street-maintenance projects.