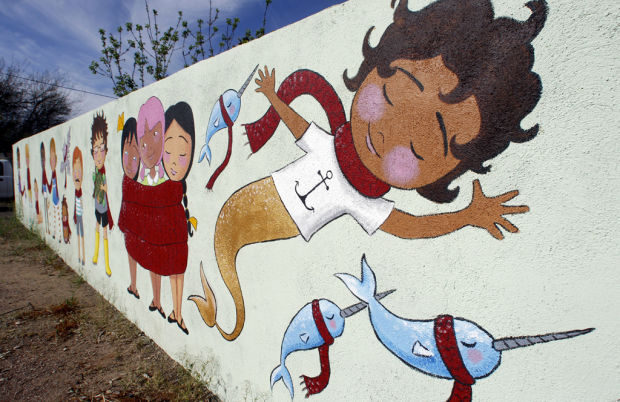 A detail of the mural on South Columbus Boulevard, near Broadway, includes whimsical narwhals and a mermaid. 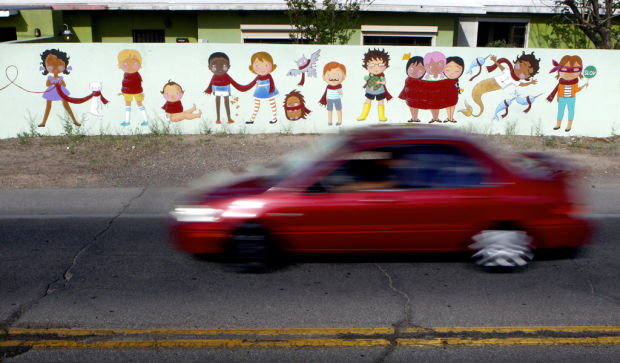 Sabrina Vincent, who painted this mural, is participating in the Neighborhood Mural Festival.

The whales wear unicorn horns on the edge of one historical Tucson neighborhood.

Motorists pull over and heads turn to see the distinctive panorama that graces a green wall on South Columbus Boulevard not far from East Broadway.

The mural, which went up in December, was done by a local freelance illustrator so enthralled with the city's many eccentricities that she created one of her own.

"When we moved to Tucson, we felt as if we had found our true home," said Sabrina Vincent, 34, who painted the mural outside her house in the San Clemente Historic District, which dates to the 1920s.

"I really love all the vintage signs around town and the murals and the big Paul Bunyan statue," said Vincent, who arrived in 2009, accompanied by husband Joey Vincent, 37, a computer engineer for Raytheon Missile Systems, and their four young children.

When the family moved into its 1941 home on East Cooper Street, "I wanted to do something funky and silly," Sabrina Vincent said.

Her mural begins on one wall with a favorite quote by Martin Luther King Jr.: "We must meet hate with love," written in what looks like red yarn.

The yarn turns a corner onto another wall and appears throughout the scene, knitted into scarves that adorn children and other creatures, including bright blue narwhals - small whales with twisted facial tusks that resemble the mythical unicorn's horn.

Sabrina Vincent said the yarn theme is a tribute to so-called "yarn-bombings" she has seen in Tucson. Yarn-bombers create items such as scarves or hats and use them to decorate public art.

Crocheted shawls, for example, have been known to appear on the bronze figures in a cancer survivors' memorial near Reid Park. And not long ago, a giant winter scarf showed up around the neck of the towering lumberjack figure on the corner of West Glenn Street and North Stone Avenue.

Reaction to the mural from neighbors and passers-by "has been very positive," Sabrina Vincent said.

"I think most people here like the things that make the city interesting and quirky."

Contact reporter Carol Ann Alaimo at calaimo@azstarnet.com or at 573-4138.

Is there something you've noticed while driving through Tucson that has piqued your curiosity to the point you wish you could find out more about it? Drop us a line, and we'll look into it.

Call the Star newsroom at 573-4142 or e-mail oddity@azstarnet.com

Photos of strange sights that make up the Old Pueblo and the retired Tucson Oddity series. This gallery originally ran April, 2013.

A detail of the mural on South Columbus Boulevard, near Broadway, includes whimsical narwhals and a mermaid.

Sabrina Vincent, who painted this mural, is participating in the Neighborhood Mural Festival.