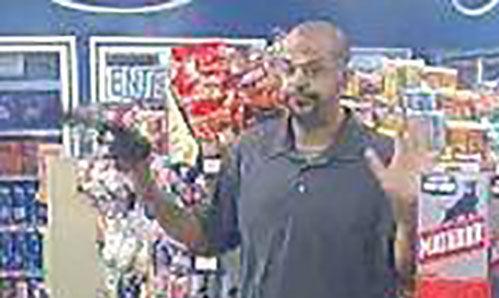 Tucson police detectives are asking for help identifying a man linked to a robbery at a Circle K on the city's south side.

In the July 1 incident, a man pointed a gun, which was originally thought to be a handgun but was later determined to be a pellet gun, at two store clerks and a customer. He demanded money inside the store at 6090 S. Park Avenue, police say. When an armed customer intervened, the man dropped the gun.

The man fled on foot with an undisclosed amount of cash and several cigarette cartons, according to the police department.

Detectives determined the man is in his 30s or 40s, around 6-feet-1-inches tall and 240 pounds with a shaved head and goatee.

Anyone with information on the identity or location of the man is asked to call 911 or 88-CRIME, an anonymous tipster line.

Second straight day of record heat for area; relief may be coming.

Christopher Crawford kicked a University of Arizona player during a game in Tempe in February 2017.

The Tucson man, King Yates, is acting as his own lawyer.

PHOENIX — Gov. Doug Ducey wants to give Arizona voters a chance to abolish a constitutional provision that gives immunity to state lawmakers u…

A look at the top players in Mountain View history.

In Tucson, restaurants like Hotel Congress and Maynards Market are giving plastic straws to customers only on request.

Group wants court to order verification of every signature.

75 pounds of drugs seized by border agents west of Tucson

Border agents found methamphetamine, heroin, and what they believe are fentanyl pills.

Man given 9 years in prison for Marana road-rage killing

Marcus Dickson was convicted last month of manslaughter in the 2017 shooting.