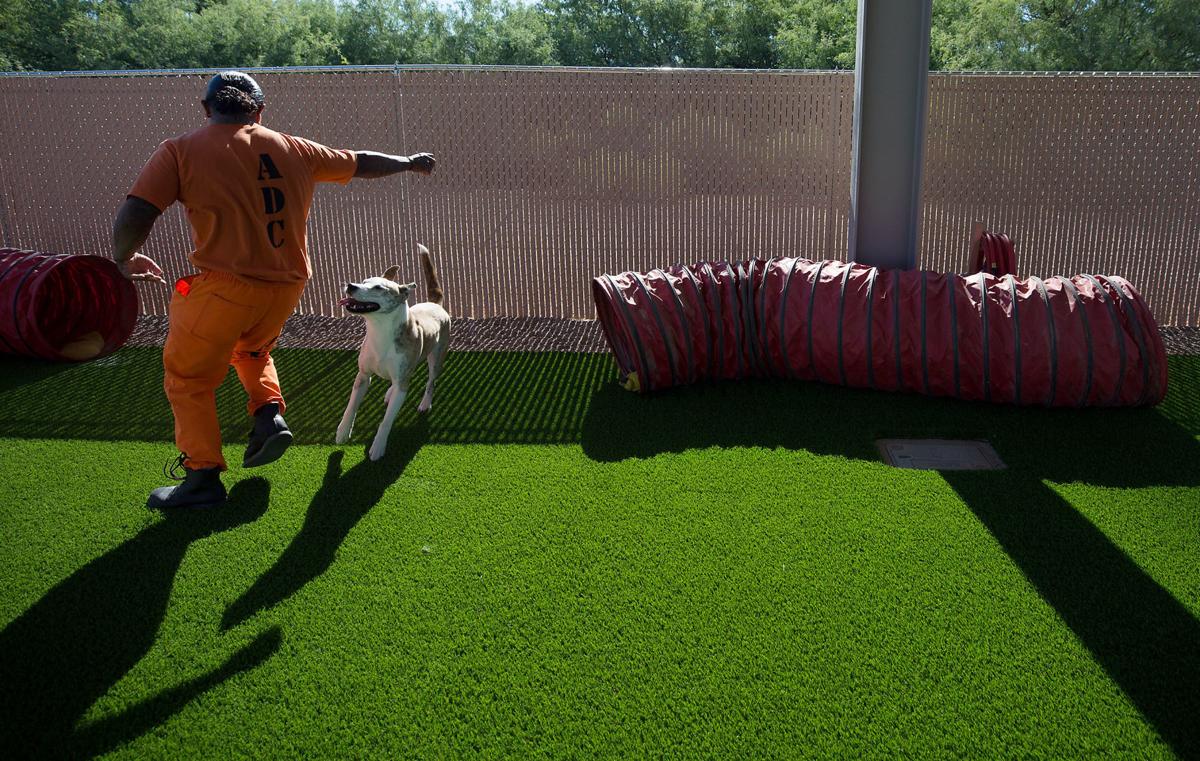 An inmate from the Arizona State Prison Complex Tucson works with Phoebe, a 3-year-old shepherd-husky mix, on following basic commands. 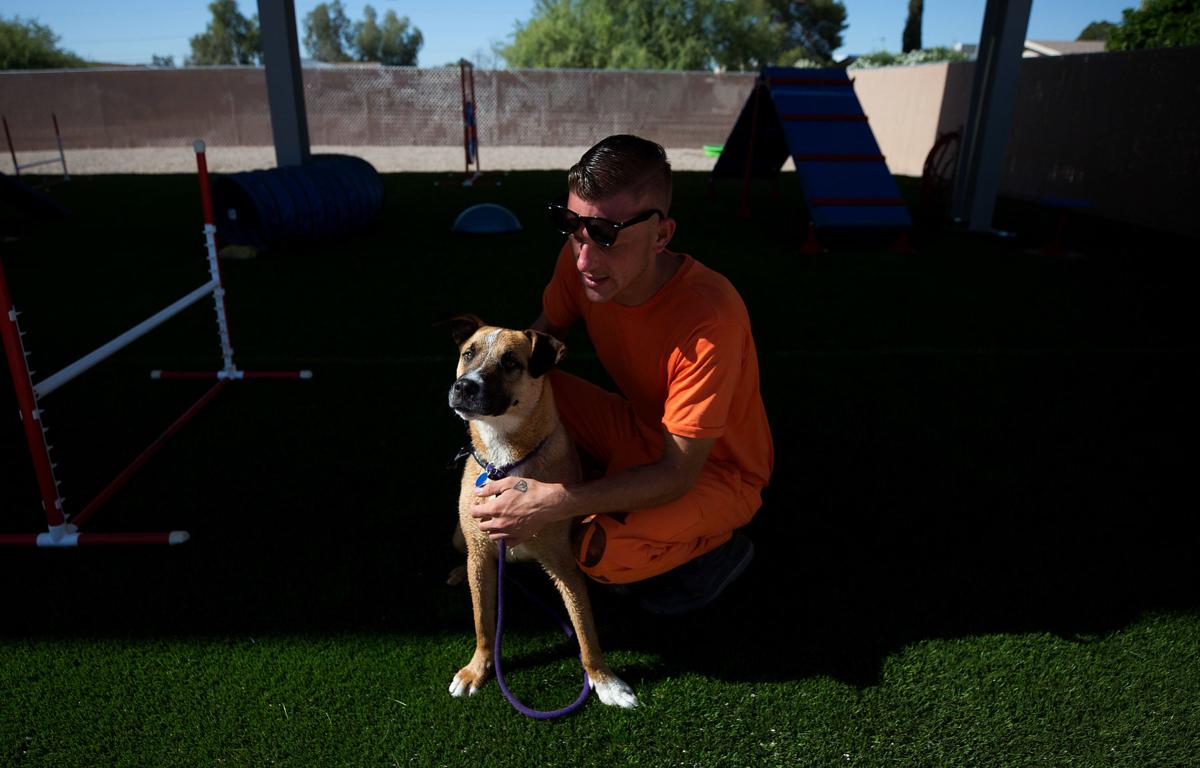 An inmate from the Arizona Department of Corrections gives some rubs to a dog during the New Beginnings class at the Humane Society of Southern Arizona, 635 W Roger Rd, on May 30, 2019. Inmates work with difficult to adopt dogs, training them in socialization and agility. 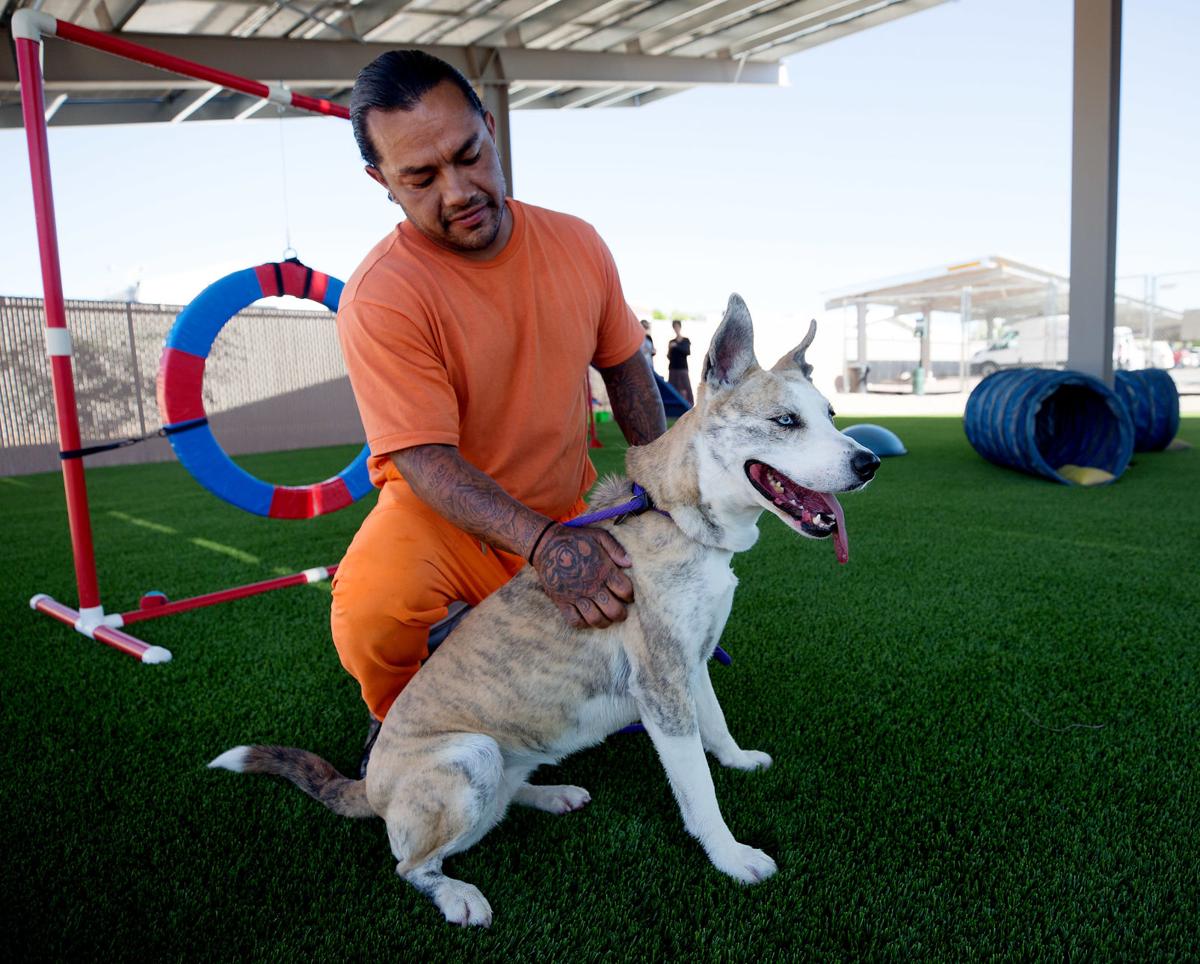 An inmate from the Arizona Department of Corrections pets Phoebe, a three year old shepherd-husky mix, during the New Beginnings class at the Humane Society of Southern Arizona, 635 W Roger Rd, on May 30, 2019. Inmates work with difficult to adopt dogs, training them in socialization and agility.

Dozens of dogs have gotten a second chance thanks to a Humane Society of Southern Arizona program that pairs prison inmates with behaviorally challenged canines.

The New Beginnings Canine Program started at the Humane Society of Southern Arizona in 2018 and has seen 60 dogs go through the program. Of those, 50 have been adopted out, with the remaining dogs either awaiting adoption or completing the program. Inmates with the Arizona Department of Corrections work with dogs at a higher risk of euthanasia due to behavioral issues, training the dogs in areas such as eye contact, leash walking, basic commands, socialization, agility, and door and crate training.

Diana Cannon, the HSSA’s chief development officer, said the program is the first of its kind in the state and is modeled after a similar program in Lancaster, California, that partners prisoners serving a life sentence with dogs from a local shelter.

The program came to the HSSA thanks to Tucson couple Tom and Linda Grissom, who were inspired after seeing a video about the Lancaster program.

The couple reached out to prison officials in California to inquire about the program and were invited to attend a graduation ceremony for inmates and dogs. Once they saw the connection fostered between the human and canine participants, they knew the program had to be implemented in Tucson, Linda Grissom told the Star.

The HSSA has been working with the Arizona Department of Corrections for about a decade, with inmates being transported to the shelter daily to help with feeding, cleaning, maintenance and just about everything else, Cannon said.

On a good day, there will be up to 18 inmates at the shelter doing everything from maintenance work, cleaning, socialization and enrichment activities with dogs and cats. Three are currently participating in the New Beginnings program, which takes the partnership a step further.

Six inmates have gone through the New Beginnings program, but hundreds more have worked with the HSSA over the years.

Some of the dogs coming into the HSSA have behavioral problems, including fearfulness, aggression, overstimulation and disobedience.

In addition to affecting the dog’s health and happiness, the behaviors make them more difficult to adopt, and sometimes when they are adopted, they’ll be returned to the shelter.

On a Thursday morning in late May, two inmates were on the agility course with dogs Phoebe and Murphy, supervising the dogs as they played and trying to get them to work off some excess energy so training could begin. The course, which opened earlier in the month, was entirely built by inmates, with the large grass field holding tunnels, poles and jumps, with a kiddie pool on the outskirts for the dogs to cool off in.

One of the men loads up the pockets of his orange prison pants with tennis balls, saying that Phoebe is extremely toy-motivated. The pair runs through the course, with Phoebe enthusiastically responding to squeaks from the tennis balls as she bounds over jump rails and through tunnels to chase her prize.

The bond between the pair is undeniable, with Phoebe responsive to her trainer’s commands and eager to receive pets and a hug.

The HSSA values its relationship with the Department of Corrections, Cannon said, adding that the new shelter has a dedicated break room for inmate workers, including a kitchenette and restroom. The Grissoms also purchased a van so that the HSSA can transport inmates on its own, instead of relying on the DOC to provide transportation.

To participate in New Beginnings, an inmate must be in good standing at the prison, have a GED or high school diploma and complete an application explaining why they want to join the program.

The inmates that work at HSSA and participate in New Beginnings have no write-ups and demonstrate good behavior that deems them trustworthy. Inmate workers at the HSSA have not committed any crimes of a violent or sexual nature, said Christian Gonzalez, the HSSA’s director of operations.

The HSSA has never had an inmate worker walk off the site and there have been no major issues, Gonzalez said, adding that there are policies and procedures in place to keep the public and inmates safe.

Applicants are also vetted to make sure they are the right fit.

Dogs can read behavior cues and temperament, and for the training program to be successful, the inmate will need to be able to bring a scared or nervous dog out of its shell, Cannon said.

“Some are so passionate about animals, I’ve seen tears in their eyes when the dog they’ve been working with gets adopted,” Cannon said, adding that in addition to the benefits of training, the affection the inmates give to the dogs is of vital importance.

The canines aren’t the only ones who benefit — the program provides inmates with confidence and a new skill set, Gonzalez said.

The HSSA is one of several partnerships the Arizona Department of Corrections has had in place for many years to help inmates prepare for their return to the community, said department spokesman Major Dwayne Morman.

"Many of our partnerships assist the community, gives inmates new job skills or keeps their skills honed," Morman said. "These various partnerships lets them have a positive impact on the community and prepares them for a successful transition back into the society. "

The program is designed for eight weeks, but it’s ultimately tailored around how long it takes for a particular dog to respond.

Heater evaluates all the dogs that participate in the program, deciding when they’re done and if they need extra work. The extended one-on-one time that inmate trainers spend with the dogs allows the HSSA staff to learn more about the animals and their particular behavioral traits, which Heater says helps cut down on the number of animals who are returned post-adoption.

The majority of dogs taken in by the HSSA have been let go by their owners, with many being relinquished because of behavioral issues, Cannon said. A regular training program helps relieve stress and reinforce good behavior.

The Grissoms, who provide some financial backing, and the HSSA hope to expand the New Beginnings program, but they’re pleased with its success.

Tom and Linda Grissom had dogs before they had one another.

After they married, they had as many as five dogs at a time, but now they’re down to just two. While the Grissoms have always been supporters of the HSSA, they didn’t become intimately involved with the organization until they brought up the idea of New Beginnings.

Tom Grissom, who is an advocate of criminal-justice reform, said that New Beginnings gives inmates structure and allows them to make choices. It also gives them a marketable skill when they get out of prison.

Some of the inmates who’ve had the HSSA as their prison work assignment have even gone on to get jobs at the shelter after their release, Gonzalez said.

Having the inmates on hand at the HSSA provides a world of benefits to the staff and animals, Gonzalez said, adding that the interaction between inmates and the dogs they work with is “pretty much the extent of the affection they’ve seen in quite some time.”

With inmates assisting on tasks such as cleaning and maintenance, paid HSSA workers are freed up for other duties, allowing the shelter to have extensive programs for children, educators and community members.

“I’ve been here 16 years, so I know what it’s like not to have them,” Gonzalez said. “We can save more lives with them here. We treat them as humans and they’re priceless to us.”

Several dogs who have completed the New Beginnings program are available for adoption at HSSA.

For information about how to adopt a pet from HSSA, visit hssaz.org/adoptions/how-to-adopt

For more information about New Beginnings or other HSSA services, call 327-6088.

The HSSA is celebrating 75 years with a retrospective of its history and a look to the future featuring the New Beginnings Canine Program.

The event will include special guest speaker and television personality Brandon McMillan of the CBS show "Lucky Dog," along with music, food and live and silent auctions.

Tom Nunn has been researching his father’s World War II history for 25 years, but a trip to Normandy this year brought him closer to his dad t…

The program is estimated to save taxpayers up to $1.9 million in incarceration costs annually and is designed to safely reduce the jail population.

Ejections at McKale dropped by more than 50 percent. Things were also relatively quiet at Arizona Stadium.

People can take care of a number of issues at the night court, including resolving outstanding warrants, reinstating driver’s licenses, rescheduling court dates and working out payment plans.

With school out and summer here, it is not uncommon for teenagers to get summer jobs. But instead of flipping burgers or folding jeans like ma…

Police say drugs and alcohol were not a factor.

Humane Society of Southern Arizona reports rise in adoptions during 2019

Of the 5,198 animals that the organization took in last year, 3,634 were adopted and 995 lost pets were returned to their owners.

An inmate from the Arizona State Prison Complex Tucson works with Phoebe, a 3-year-old shepherd-husky mix, on following basic commands. 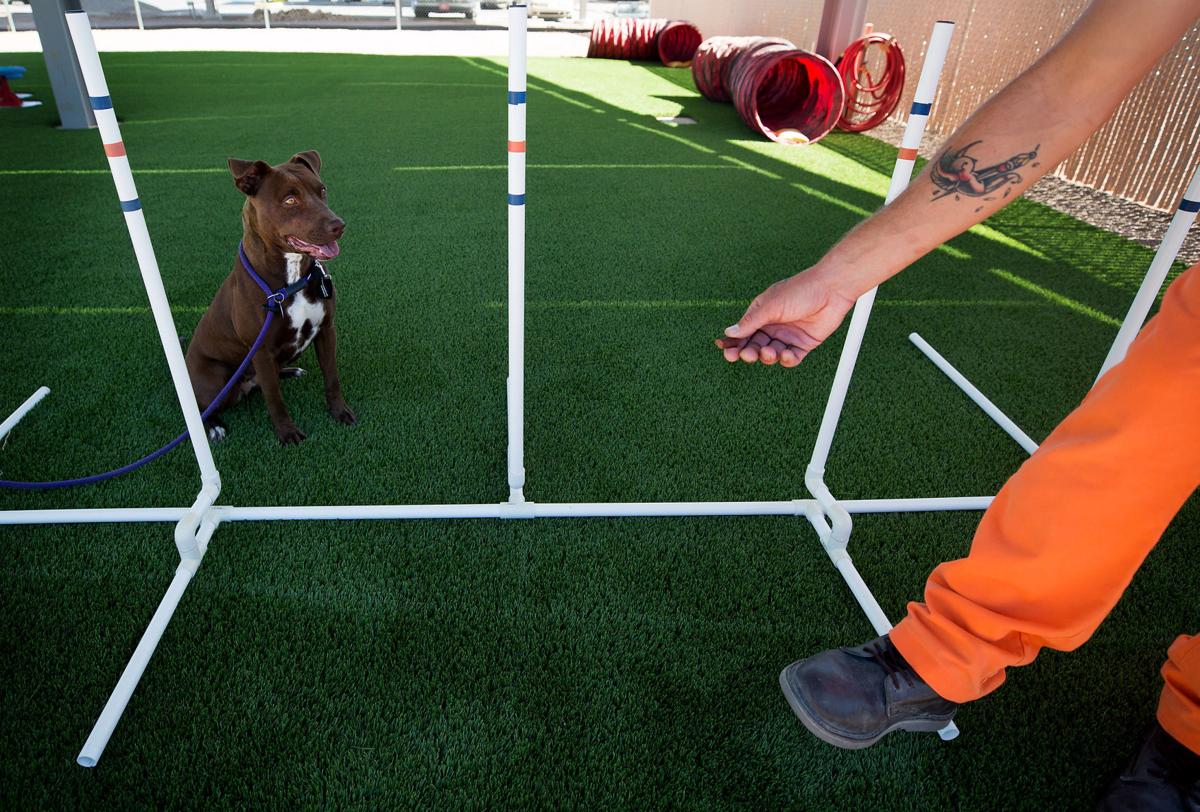 An inmate tries to coax Coco, a 1-year-old pit bull mix, with a treat. Sixty dogs have gone through the New Beginnings Canine Program, and 50 of them have been adopted.

An inmate from the Arizona Department of Corrections gives some rubs to a dog during the New Beginnings class at the Humane Society of Southern Arizona, 635 W Roger Rd, on May 30, 2019. Inmates work with difficult to adopt dogs, training them in socialization and agility.

An inmate from the Arizona Department of Corrections pets Phoebe, a three year old shepherd-husky mix, during the New Beginnings class at the Humane Society of Southern Arizona, 635 W Roger Rd, on May 30, 2019. Inmates work with difficult to adopt dogs, training them in socialization and agility.