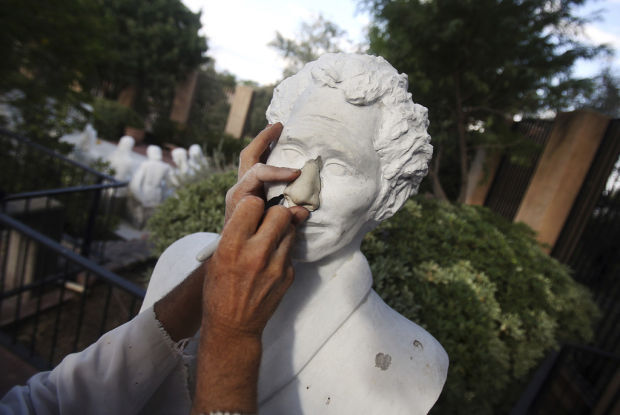 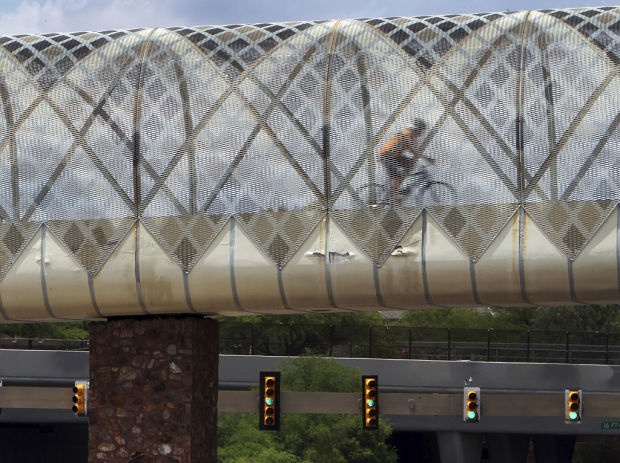 A bicyclist rides across the Diamondback Bridge, where signs of age are showing on its ﻿underbelly, at East Broadway just west of North Euclid Avenue. A number of public art pieces around the city are in need of maintenance or repair, but Pima County says it doesn’t have the money to provide it. 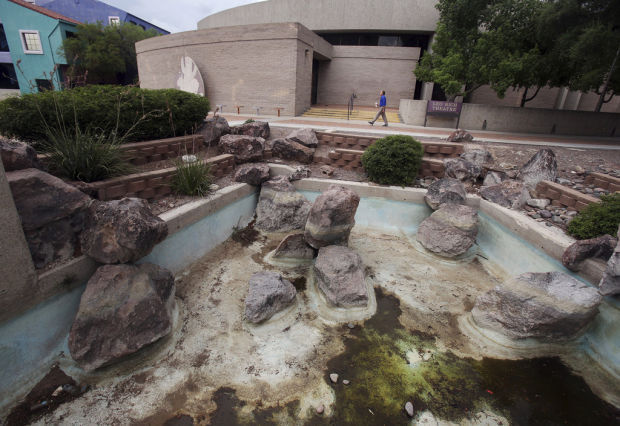 Pedestrians and downtown workers unwinding on break are greeted by a network of empty fountains outside the Tucson Music Hall by the Tucson Convention Center. ﻿ 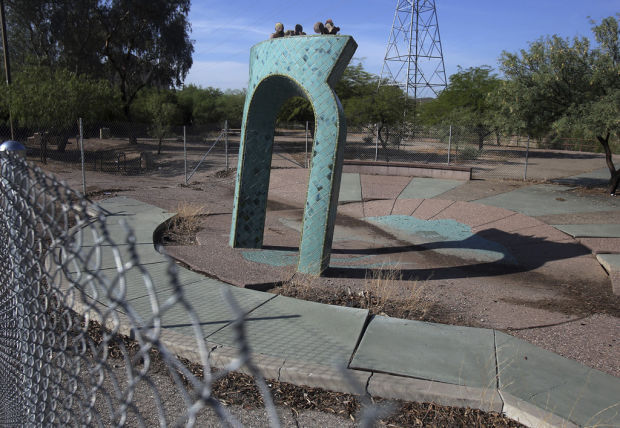 ﻿This Barbara Grygutis sculpture along the Santa Cruz River Walk between West Speedway and West St. Mary’s Road near Interstate 10 is fenced off because the ground around it is sinking. 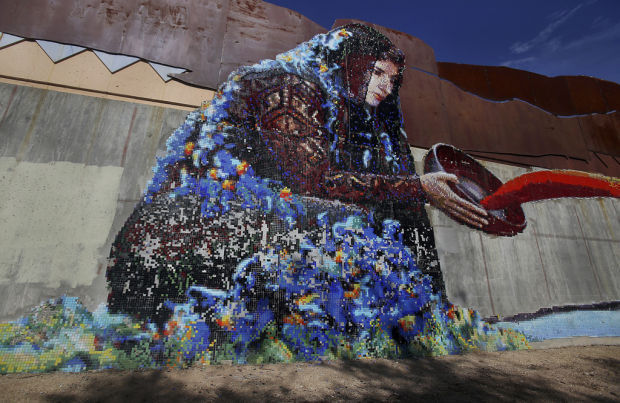 ﻿This mural in Barrio Anita’s Oury Park on West St. Mary’s Road, part of a barrier to block sound from nearby Interstate 10, is shedding its mosaic tiles.

The Diamondback Bridge that marks the east entrance to downtown is cracked and shedding its skin.

A mosaic mural in Barrio Anita, a point of pride for the neighborhood, is crumbling.

And the ground is sinking underneath a Barbara Grygutis sculpture along the Santa Cruz River walk. Designed to be a respite for walkers, it is now caged behind a chain-link fence.

Tucson and Pima County have spent millions on public art since 1989, but a number of the nearly 200 pieces on display — most of them in the city — are in desperate need of fixing, cleaning and saving.

Many of the public artworks were installed as part of the city’s 1-percent-for-art program — 1 percent of every capital-improvement project is earmarked for public art. None of the money can be set aside for maintenance because capital money is designated for creating a project and all the funds must be used specifically for that, said Mary Ellen Wooten, public art program manager with the Tucson Pima Arts Council.

In Tucson lately, that means most public art projects are installed and ignored. But many places in Arizona and nationwide — including Pima County and Oro Valley — have found ways to pay to keep public art in good condition.

The Regional Transportation Authority also has a public art program but leaves the responsibility of maintenance up to whatever jurisdiction the art is in.

“Our most important concern now for public art is that it is minimal to maintain,” Donofrio said. “When we determine the type of art we want, that’s what we look at.”

David Hoyt Johnson was public art manager at the then-fledgling Tucson Pima Arts Council when the 1-percent program was established. Then, he said, responsibility for maintenance fell to the department that received the capital improvements, most often Tucson Parks and Recreation or Tucson Department of Transportation.

“If it was Parks and Rec, it was presumed they would provide for maintenance,” he said. “Transportation and Parks and Rec agreed that art is an asset; an appreciating asset that should be cared for.”

For a while, that worked. And then the recession hacked into government budgets — and services like maintenance.

No dough for maintenance

Today, the Tucson Department of Transportation has no funds for art maintenance. On its watch the skin on the Diamondback Bridge, designed by Tucson artist Simon Donovan, is ripped. Its rattle has gone silent and its concrete base is flaking and needs to be repainted.

Donovan received $24,000 for the design of the $2.47 million pedestrian bridge, built in 2002. Seeing its gradual decay is a series of heartbreaks for the artist, who submitted a maintenance schedule at the time the bridge was installed.

“If they had just followed directions for maintenance protocol,” he said, “there probably wouldn’t be those problems.”

Close by, at the Broadway underpass, is another public artwork under the department’s care: Stephen Farley’s 1999 tiled mural, “Windows to the Past, Gateway to the Future,” which features replicas of historical photos of Tucson and Tucsonans.

It, too, shows signs of wear. The caulking around about a dozen tiles on the $171,150 installation has expanded and let moisture seep through, Farley said.

“They needed to periodically inspect it, and every 10 years the caulking should be replaced,” he said. “It would be nice if there were a dependable source for maintenance.”

Both the mural and the rattlesnake bridge have become iconic pieces for Tucson.

Back in 2000, the mural was tagged and the response was immediate. “People were outraged,” recalled Farley, now a Democratic state senator representing Tucson.

The rattlesnake bridge sparked national attention when it was built, noted Johnson, who retired earlier this year after 27 years with the Tucson Pima Arts Council.

“It received lots of awards,” he said. “It has a reputation beyond our city.”

In extreme cases, the Transportation Department can come up with the money for repairs — like when a car crashed recently into the artwork at the Sixth Avenue underpass. But finding funds to conserve and maintain public artworks is nearly impossible, Donofrio said.

“It’s quite, quite frustrating that there isn’t any money” for maintenance, she said.

The city Parks and Recreation Department oversees the artworks in the city’s parks. While it has a fund of about $25,000 a year for maintenance, it struggles to keep up with the needs.

“A lot of our pieces are aging,” said Peg Weber, who oversees the department’s public arts works. “We do regular maintenance on park pieces, but some things we haven’t gotten to because we are trying to figure out how to fix them.”

The Grygutis installation along the river walk falls into that category. It was built in 1997 at a cost of $31,500. The ground beneath the colorful arch, covered with Grygutis’ signature tiles, is sinking. The sculpture seems strong, but about six months ago the city fenced it off for safety reasons. Weber said her department’s experts believe they have come up with a solution to stabilize the soil and she hopes to work with the city Transportation Department to get it fixed. Meanwhile, the arch that once beckoned walkers to take a break and seek solace is out of reach behind a fence. A thing of beauty has become an eyesore.

Less than a mile away is “Anita’s Song,” a massive mural along a barrier wall between I-10 and Oury Park. It forms the west border of the park and is visible from almost every part of the tiny Barrio Anita neighborhood off West St. Mary’s Road. The mural, designed by William Wilson and Joshua Sarantitus, was built in 2005 and cost $340,000.

Mosaic, photography and paint tell the sweeping story of the land and the neighborhood. The glass tiles sparkle and add a depth to the image of water that once flowed through the area, and to the faces of the people.

But the mural began to deteriorate almost immediately after it was installed. Take a close look and you’ll see portions of faces missing, gaps in the images that were once there. Glance down and you’ll find the ground littered with small, colorful tiles that have shed like teardrops and pooled at the base of the mural.

She met with Sarantitus when he was in Tucson recently and says the artist will submit a bid for repairing the piece. Weber is determined to get it fixed this year, but there is no guarantee the funds needed to do that will be available.

Other sources of maintenance money are out there, though it can take determination to find them.

Weber, of Parks and Rec, said she often writes grants and seeks outside sources for maintenance funds. The Garden of Gethsemane on West Congress along the Santa Cruz is getting a much-need face-lift thanks to a $51,000 grant from the Salvador Foundation, secured with the help of a local Knights of Columbus chapter.

Artist Gregory D. Schoon “has shown a lot of ingenuity in the repairs, said Ralph Montijo of the Knights of Columbus. “The surface is as lasting as he can make it, but we don’t have a permanent source of money to maintain it.”

Some too costly to repair

Sometimes public art can be too expensive, or too complex, to fix. That’s when a deaccession request is submitted to the Tucson Pima Arts Council, which provides guidance and recommendations on Tucson and Pima County’s public art.

Last year, Parks and Rec requested deaccession for the fountains in front of the Tucson Convention Center Music Hall. They are old, the plumbing obsolete, the upkeep expensive. And it had been a long, long time since water gurgled from the fountain.

But TPAC discovered that the fountains are elements of a landscape architecture piece that wends its way through the 5-plus acres occupied by the convention center. That landscape was designed by Garrett Eckbo, one of the most important and innovative landscape architects of the last century. The California-based Eckbo died in 2000.

Over the years, elements of the Eckbo landscape had been painted, a pool was taken out and a sculpture in front of the arena removed. Working with its public arts committee, TPAC’s research led to the denial of the deaccession request, and has put a stop to the destruction or altering of any of the landscape elements, at least for now. The Tucson Historic Preservation Foundation spearheaded a Historic Landscape Conservation Master Plan, which has been passed on to the mayor and council for adoption, and the landscape has been nominated for historical status.

But recognizing the worth of the Eckbo piece and preserving it are two different things.

“We are trying to find the money to restore what some see as a blight and embarrassing ... but is an asset that could encourage growth,” said TPAC’s Wooten.

“The last estimate I heard on the fountains alone was about $300,000,” said Parks and Rec’s Weber. The whole project “would be substantial money; at least a half million or upward.”

Arts advocates say money spent on the Eckbo piece and other works of public art is money well-spent.

“The artworks are a record of who we are, what we revered and who we honored,” said Johnson, the former public art manager. “We must take care of that. It’s a question of respecting our culture and the community’s memory.”

On stage in Tucson this week

Comedies, musicals, drama — the town's got 'em all

A prolific fundraiser, she has already applied for grants for programs that will benefit artists.

Invisible Theatre ends its season with a world premiere.

Leslie Abrams is a dog. An infant. And dead.

More than 250 artists plan to open their studios and greet visitors curious about their work.

A bicyclist rides across the Diamondback Bridge, where signs of age are showing on its ﻿underbelly, at East Broadway just west of North Euclid Avenue. A number of public art pieces around the city are in need of maintenance or repair, but Pima County says it doesn’t have the money to provide it.

Pedestrians and downtown workers unwinding on break are greeted by a network of empty fountains outside the Tucson Music Hall by the Tucson Convention Center. ﻿

﻿This Barbara Grygutis sculpture along the Santa Cruz River Walk between West Speedway and West St. Mary’s Road near Interstate 10 is fenced off because the ground around it is sinking.

﻿This mural in Barrio Anita’s Oury Park on West St. Mary’s Road, part of a barrier to block sound from nearby Interstate 10, is shedding its mosaic tiles.